10 Photos to Get You to New Zealand ASAP 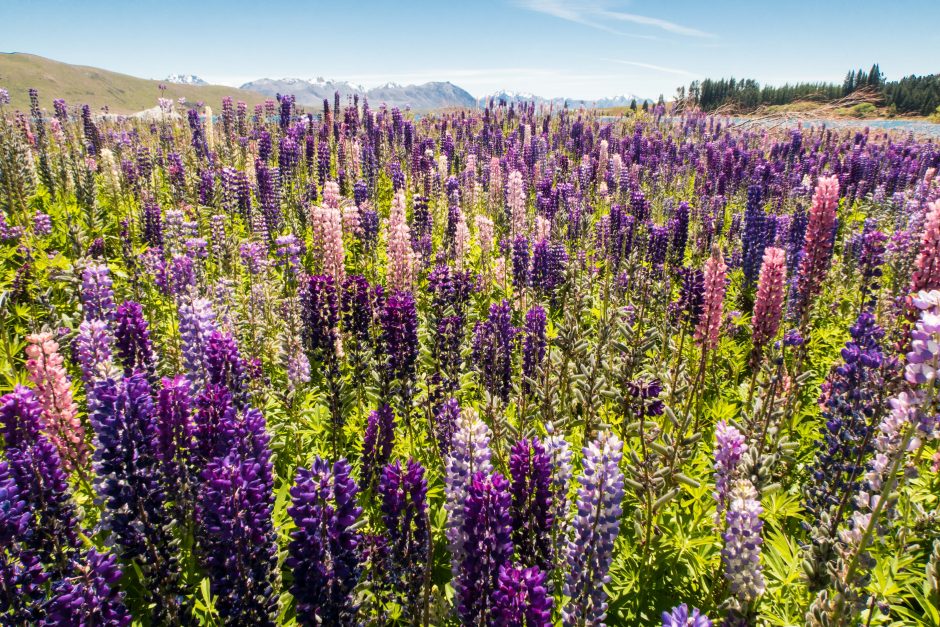 Guys. You need to get there. Like, right now.

I have plenty of stories to share from our travels and I’m excited to get to those, but in the meantime, I wanted to push out a little New Zealand inspiration. You know, in case you’re planning any travel for 2017… 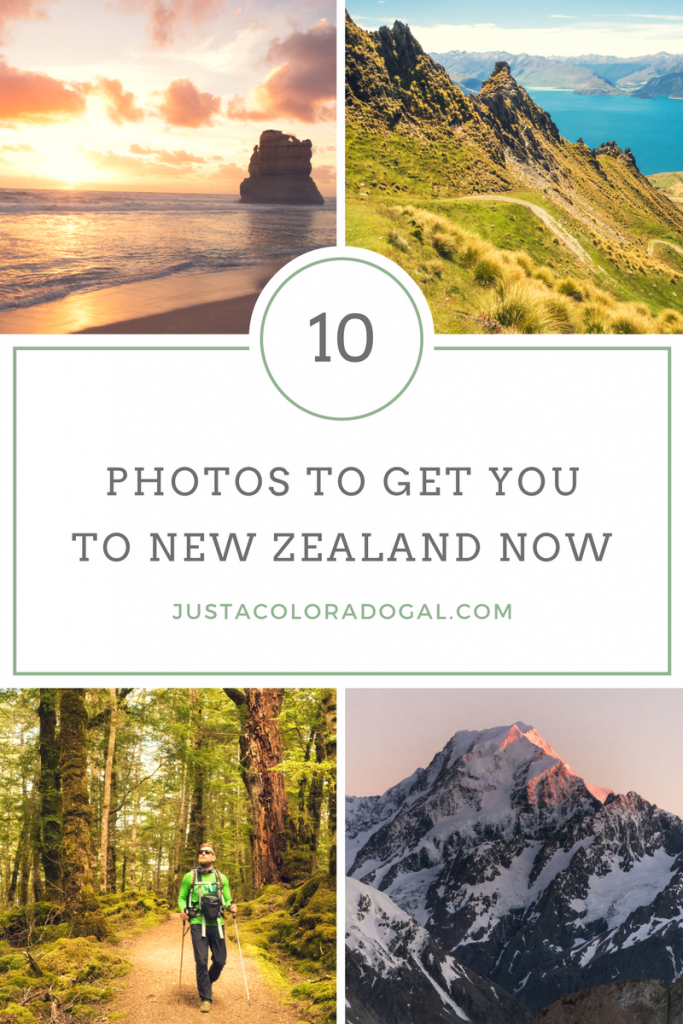 The Night Sky Above Mueller Hut

It can hard to find a starry sky with zero light pollution. Fortunately, New Zealand has such a small population {4.4 million} that glistening city lights are at a minimum. This is even more pronounced on the South Island where a mere 1 million people live. Both Wellington and Auckland are on the North Island and since those two cities house the majority of the country’s population, the South Island is relatively pristine.

Of course, this makes for some absurdly beautiful scenery. 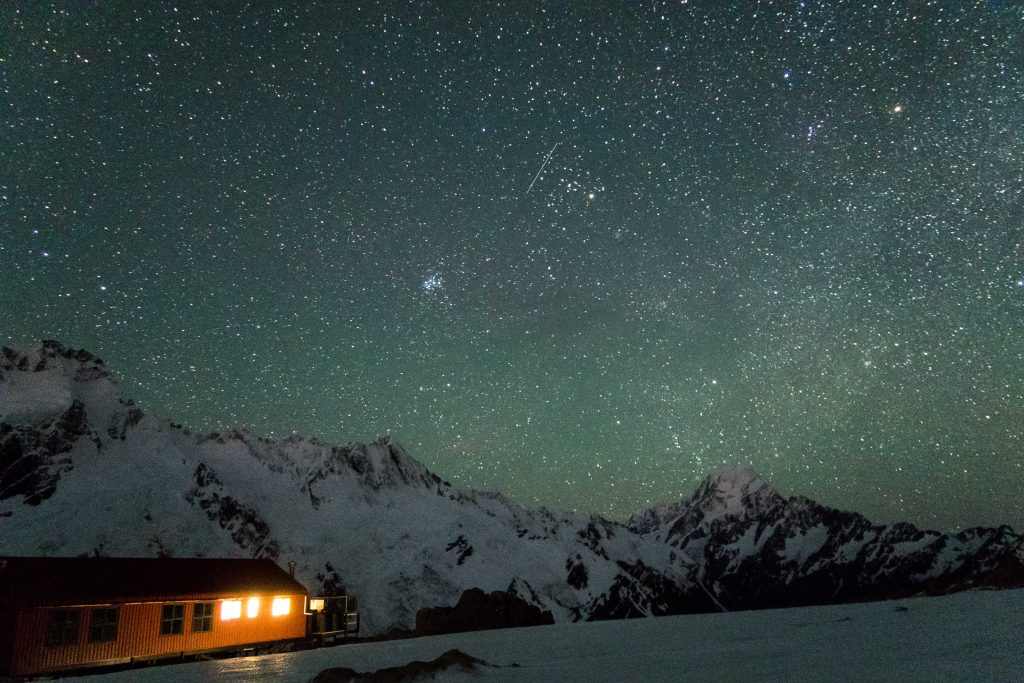 Mueller Hut in itself was a treat and easily my favorite bit of our entire three-week trip. But I’ll save that story for another day. For now, just appreciate the view!

Most of our favorite stuff is on the South Island but naturally, that is where the weather is the most finicky. Storms roll in on the regular, and one even caused us to hightail away from a trailhead since we knew we had 5-6 small streams to cross on the drive out. As it turns out, those “small streams” quickly became raging rivers during the rainstorm, stranding drivers on the opposite side.

The beauty of this severe weather? That view once the clouds begin to clear! 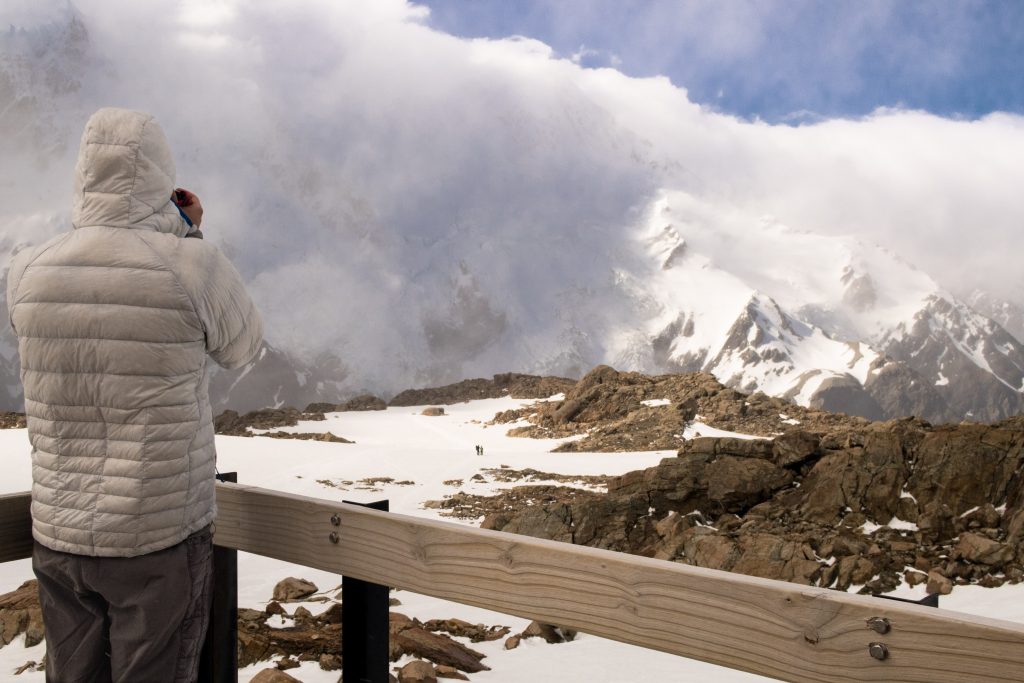 Fun fact: Sir Edmund Hillary hiked up to Mueller Hut {see above} for one of his first treks. The story goes that he was so inspired by the scenery that he became interested in the sport of mountaineering. And, well, we all know how that turned out, right? 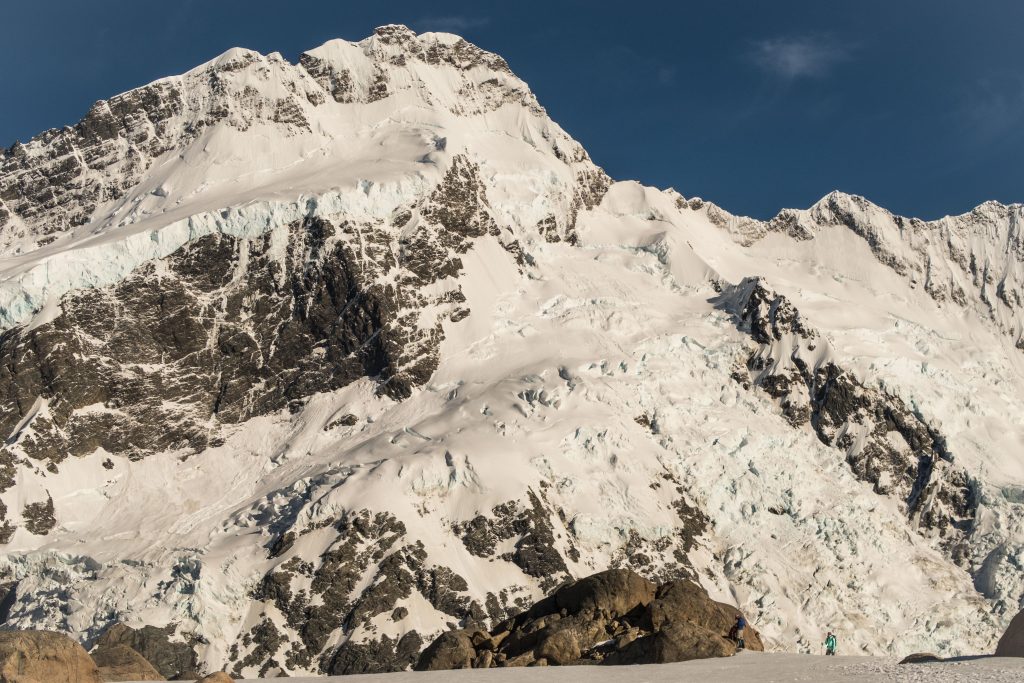 I can’t blame the man. I couldn’t keep my mouth shut while wandering through Mt. Cook National Park. Those peaks! Those lakes! Those colors! How could this be real life?! 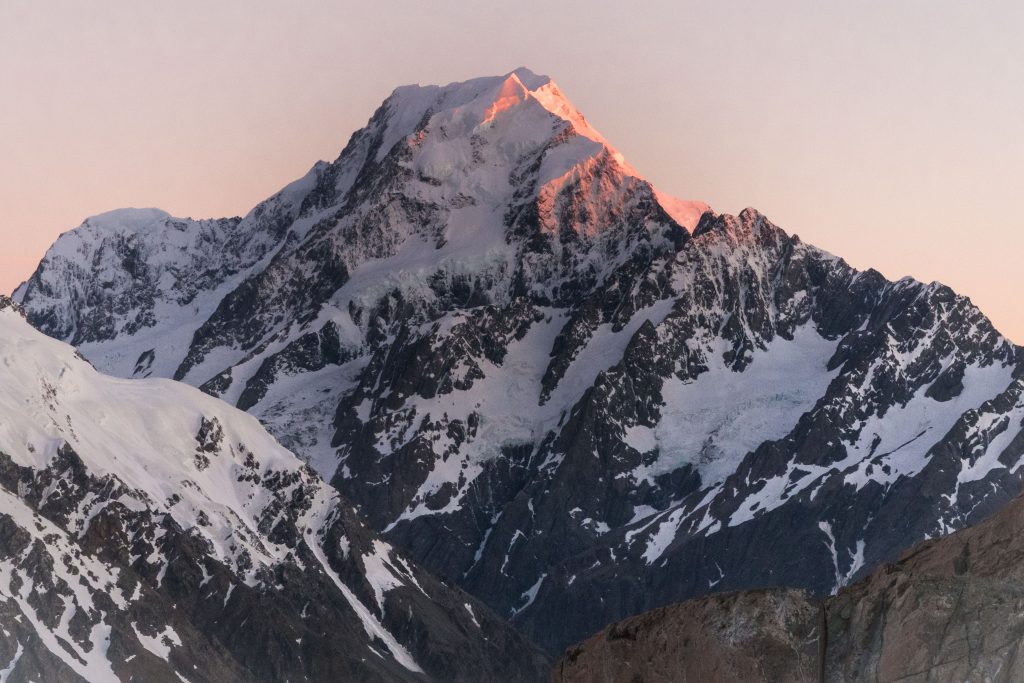 Maybe it’s because I live in a state where cows are the du jour form of livestock. Either way, I was enamored with all of the sheep in New Zealand! 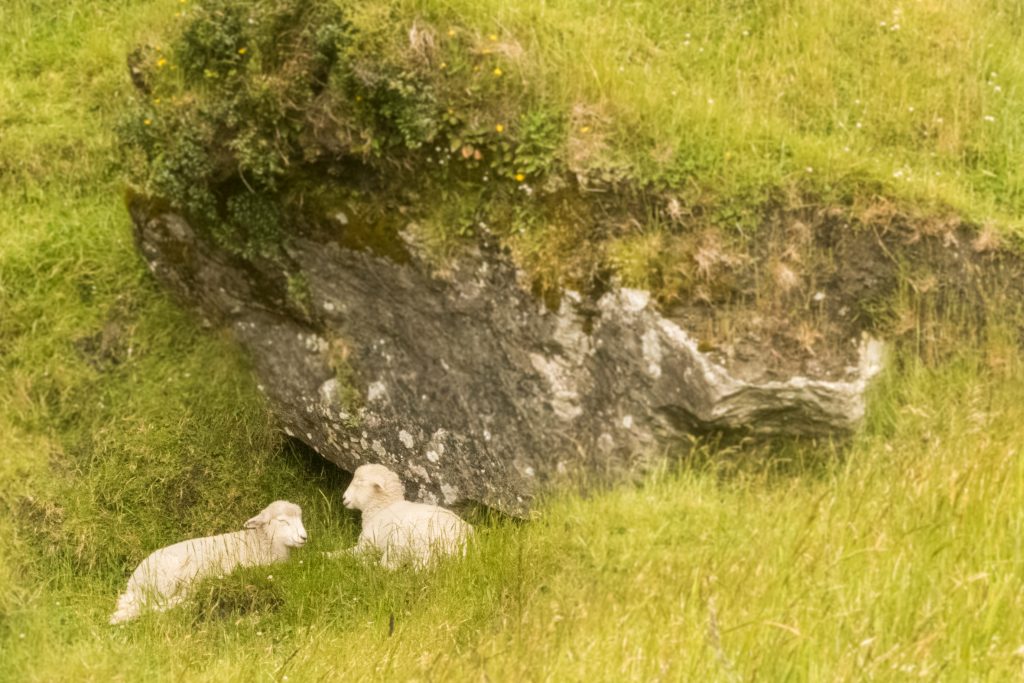 Quite literally, sheep dot the landscape of every single hillside. Big sheep, small sheep, and baby sheep too. I couldn’t stop cooing at all of the lambs with their sweet prance and devotion to their mothers. Would you look at those faces?!

Lupine isn’t an easy flower to grow here in Colorado. In fact, the only place I can think of that has a plentiful showing is Crested Butte, and that is only during prime time near late June-early July. That said, it’s easily my favorite wildflower.

You can imagine my delight when we came across fields upon fields of lupine! 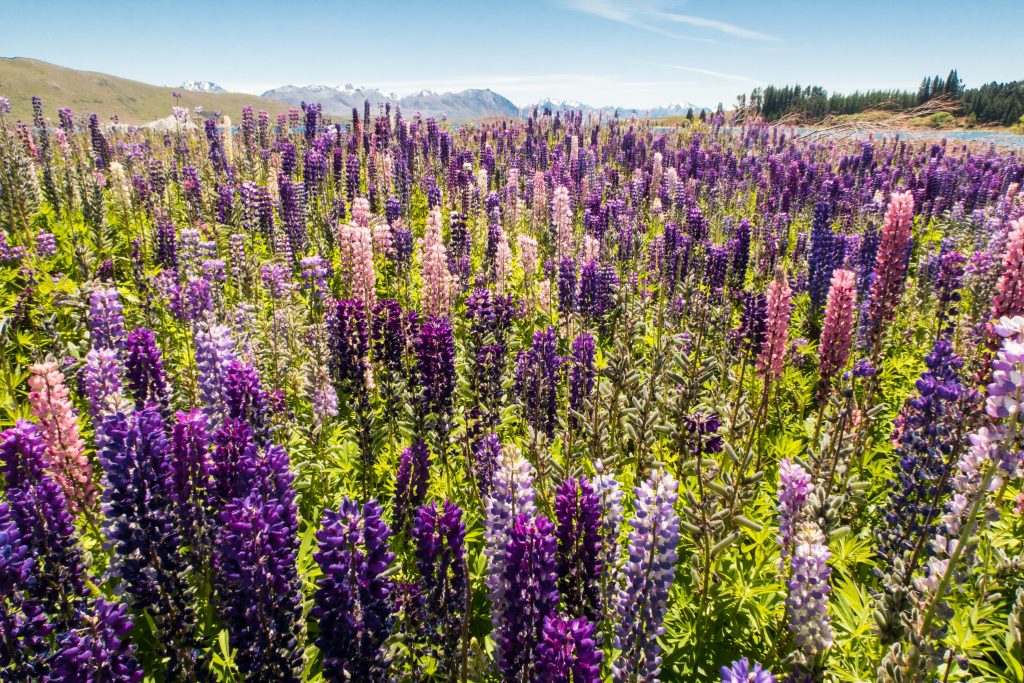 As it turns out, lupine is considered an invasive species by New Zealand’s Department of Conservation. First introduced to NZ in the 1950s, rumor has it that bus drivers sprinkle lupine seeds alongside the roads of busy tourist routes in the hopes that more tourists will be drawn to the colorful flower. I mean, it worked for me, right?! Sadly, lupine grows near rivers and streams in such large masses that it threatens the habitats of other native creatures.

From Alpine to Rainforest

New Zealand is absurdly versatile. Not only was I impressed by the massive peaks, but I fell in love with the lush rainforests too. 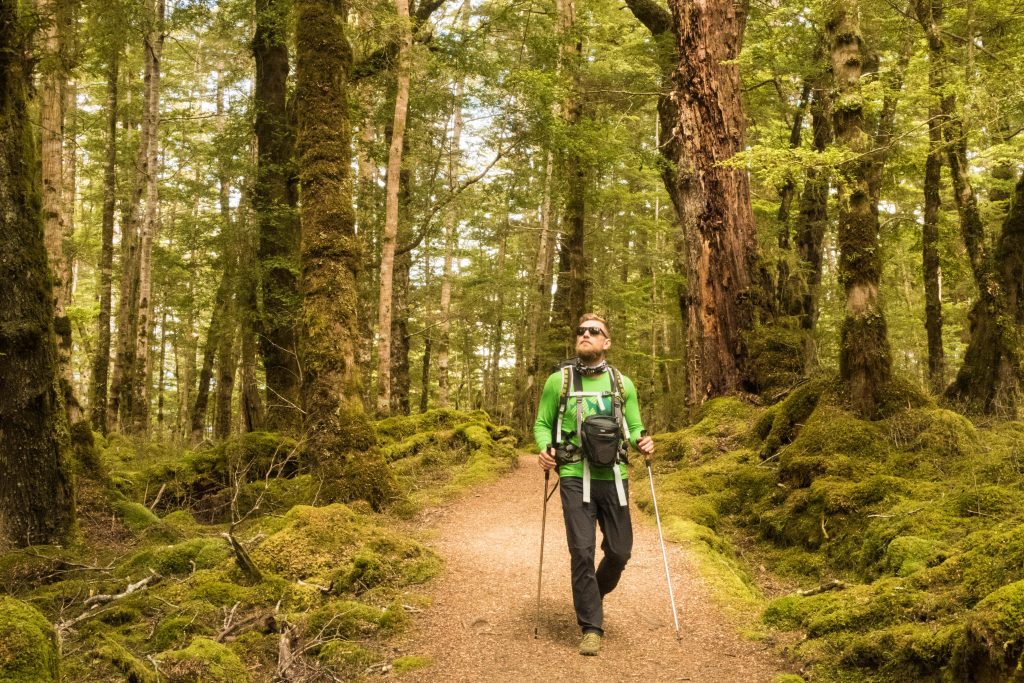 As we trekked through the last couple miles of the Kepler Track, I realized we were completely surrounded in greenery. I looked at Will and exclaimed, “This is what it feels like to live in The Shire!”

Almost immediately, Will and I noticed the country’s lack of switchbacks on exceptionally steep climbs. Y’all, I’m not kidding: Kiwis do not mess around when it comes to elevation gain!

Our first hike to Mueller Hut covered 3600 feet of gain in 3.2 miles. Our next hike, Isthmus Peak, covered 4500 feet of gain over 4.9 miles…and that was just a “quick local jaunt” near the town of Wanaka. 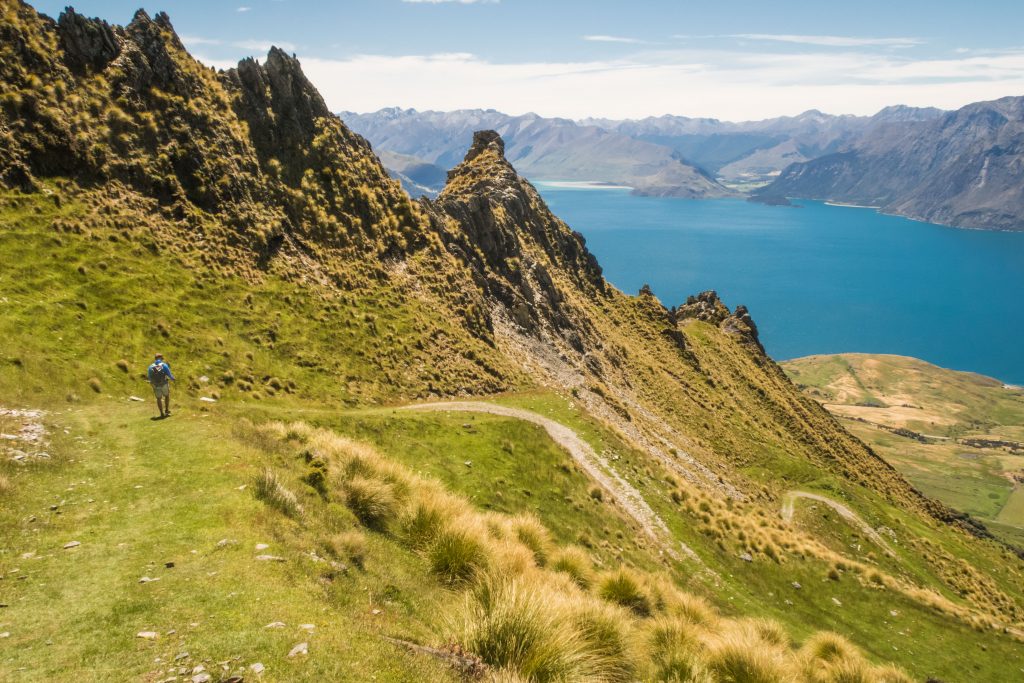 Sure, they’ll throw in some twists and turns on occasions just for wimpy Americans like us, but on the whole, I was impressed by the pure athleticism required for these hikes. You’re either in or out; I like that!

And a Little Bit of Ocean

You can’t leave New Zealand without seeing the ocean {I mean, obviously. It’s an island!} But the water there is exceptionally beautiful and I found myself falling in love with the beaches. Will and I fell in love with the winding coastline of the Marlborough Sound, but even quick in-and-out stops had a ridiculous amount of charm. 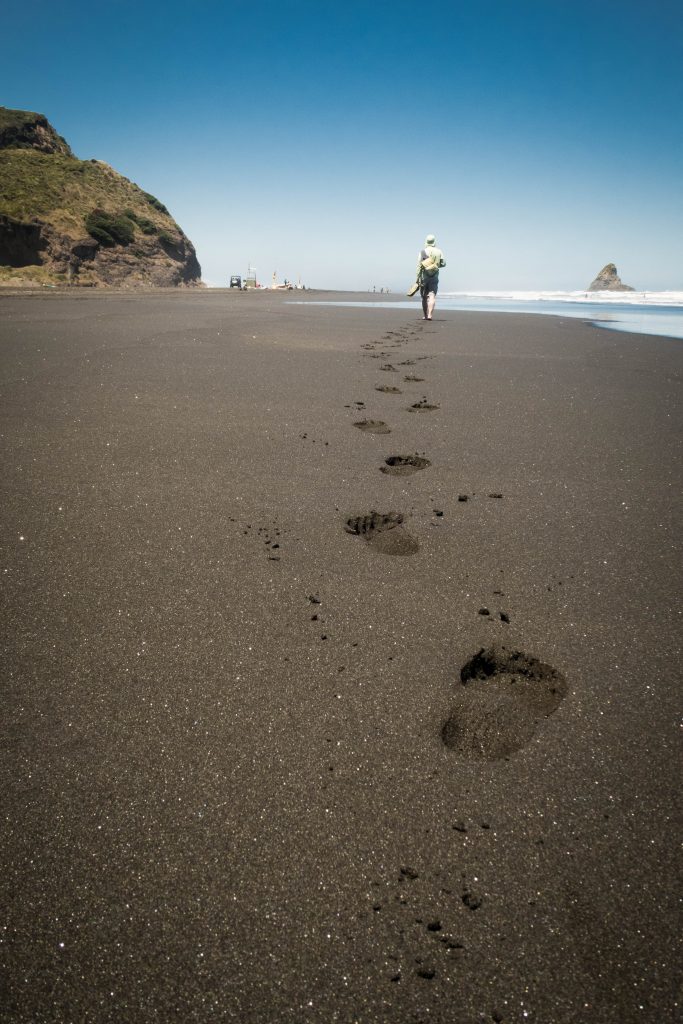 Take Karakare, for example. Located on the West coast of the North Island, Karekare is down the road from Piha, a popular beach for Auckland residents. But regardless of its “popularity,” we found the beach quiet, peaceful, and oh-so-scenic.

Black sand beaches have always mesmerized me, in part thanks to the contrast of the sand against the water and sky. Karekare was no different; I could’ve spent hours walking around on that glimmering black beach.

Nolah: Sleep With A Purpose {Giveaway}