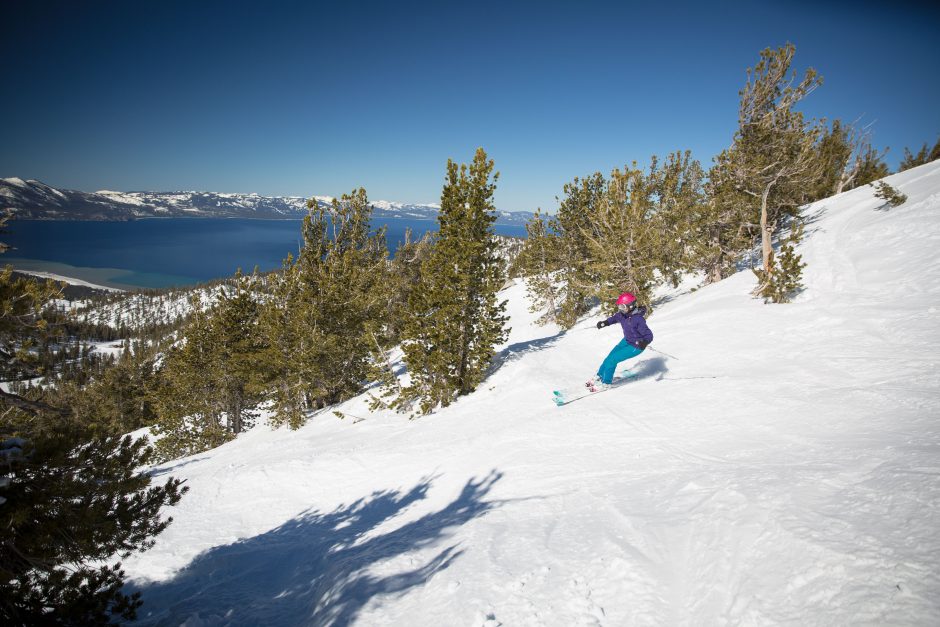 While traipsing about the country, Will and I found ourself itching to experience a few new ski resorts. Sure, we live a hop, skip and a step away from some of the best skiing in the country, but it’s always fun to try new places! Thankfully, there are some terribly kind folks working at Vail Resorts who agreed to facilitate our wanderlust by hooking us up with a three-day pass to any Vail Resort ski mountain.

How to decide?! So many options! Vail Resorts owns an impressive list of ski hills including four in Colorado, three in California, one in Utah, Minnesota, Michigan, and Wisconsin, as well as one in Australia. Sadly, our Subaru wasn’t quite going to make the trans-Pacific trek to Australia, so we opted for the next best thing: skiing at Kirkwood Mountain Resort and Heavenly Mountain Resort in California. 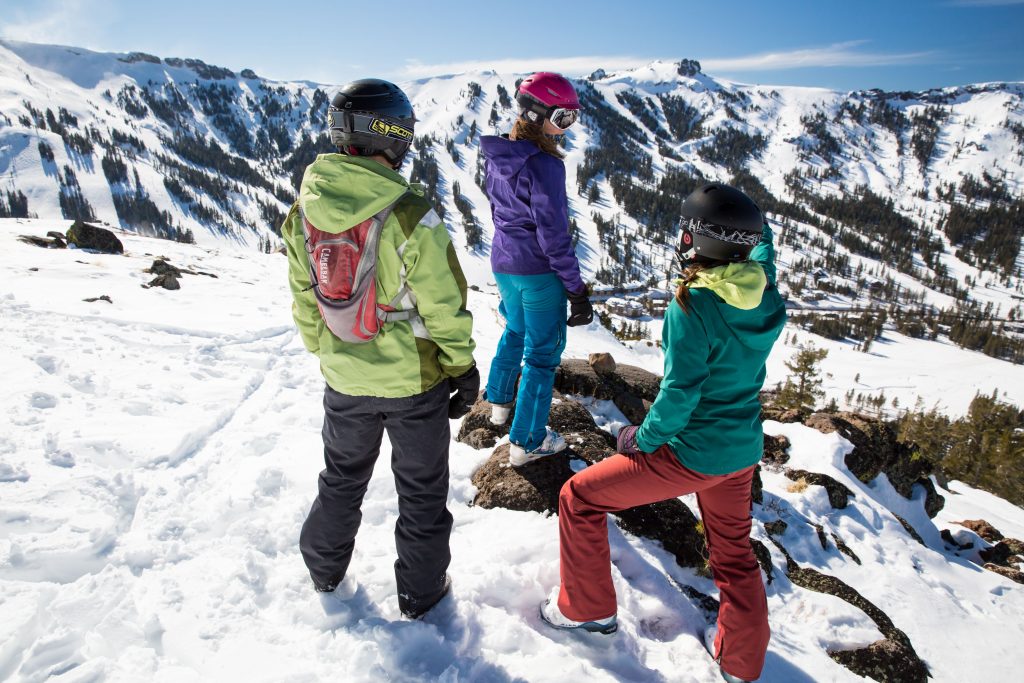 It had been YEARS since I’d visited Tahoe, but the sentimental memories weren’t quite as strong in me as they were in Will. You see, he grew up skiing at Northstar and I could almost imagine a 10-year-old Will exploring the town of Tahoe while bombing down the ski hill in his sweet 90s gear! In fact, the nostalgic pull almost convinced us to head back to Northstar just so Will could relive his childhood…but in the end, we opted for the new-to-us ski resorts.

Acquired by Vail in 2012, Kirkwood is still a bit of a “local mountain.” It doesn’t have the glitz and glamour that other resorts have, but that is exactly why I fell in love with the place. With some of the most snow in the area combined with seriously awesome terrain, I knew we’d have a great day.

Unfortunately, Mother Nature was feeling a bit feisty. We arrived at Kirkwood just as mega wind gusts rolled through the base area. In fact, the winds grew so strong that a handful of the chairlifts were forced to close for the day. This meant that a lot of the “expert-terrain” was inaccessible to us, but we found an alternate route: boot packing! 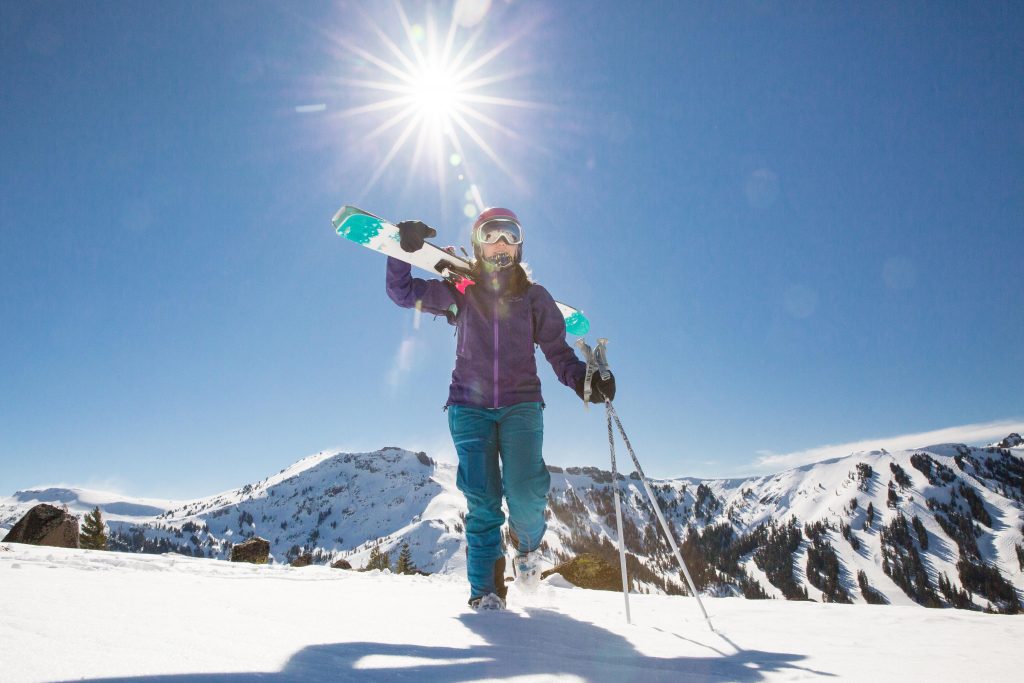 We caught the Caple’s Crest chairlift to the ridge and began bootpacking towards the Kirkwood boundary line. We didn’t hike too long, but it sure felt toasty! Aside from the wind, it was a bluebird day with a blazing hot sun. I was sweltering in my ski clothes within minutes, and definitely wishing that I had worn backcountry gear rather than alpine gear! 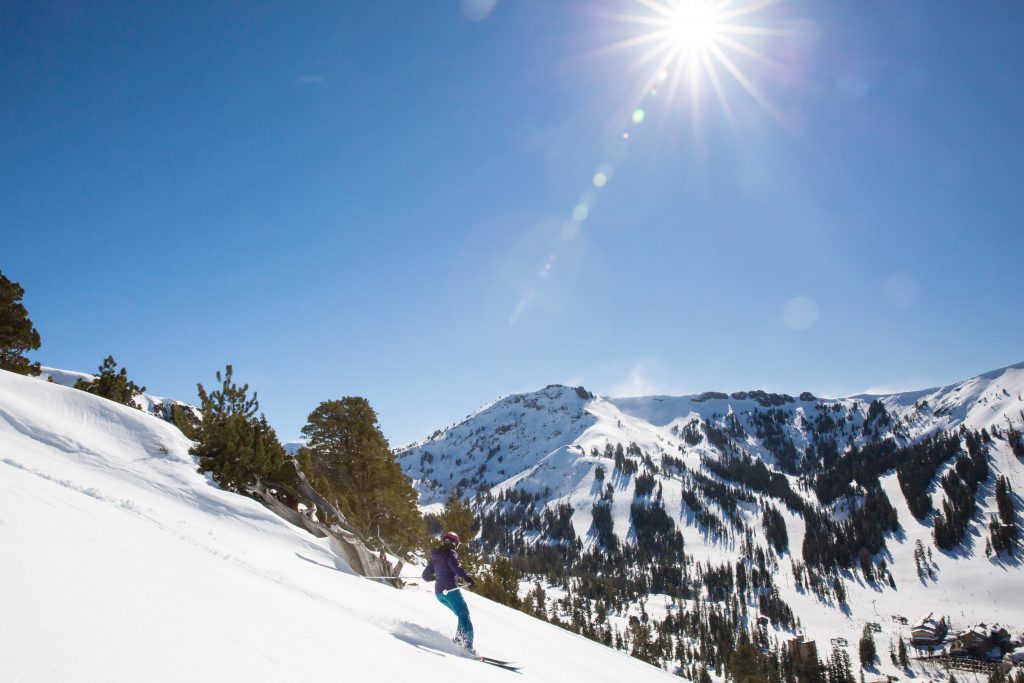 Regardless, the sweaty equity was totally worth it. We finally crested the top of the hill to a wide open run full of snow, sunshine and zero people. Score! Of course, I wasn’t quite ready to ski: I had to take a break and cool down first. 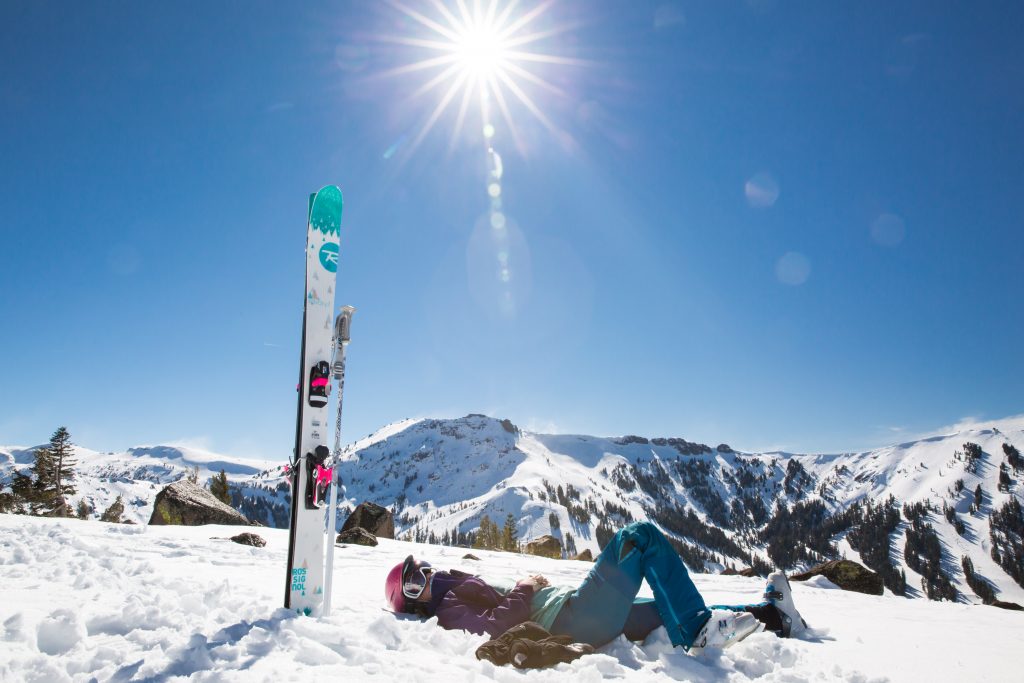 And the turns? So worth it.

Never the types to let grass grow under our feet {I actually hate that expression; no idea why I used it!}, we followed up Kirkwood with Heavenly Ski Resort the next day. And I’m really glad we did it in a back-to-back fashion since it was fun to compare two completely different resorts.

In a word, Heavenly is HUGE! With ~4800 skiable acres, it is definitely a beast of a resort. But more impressive, however, was the scenery. I’ve never skied while admiring a glimmering blue lake before, but trust me– the scenery never got old! 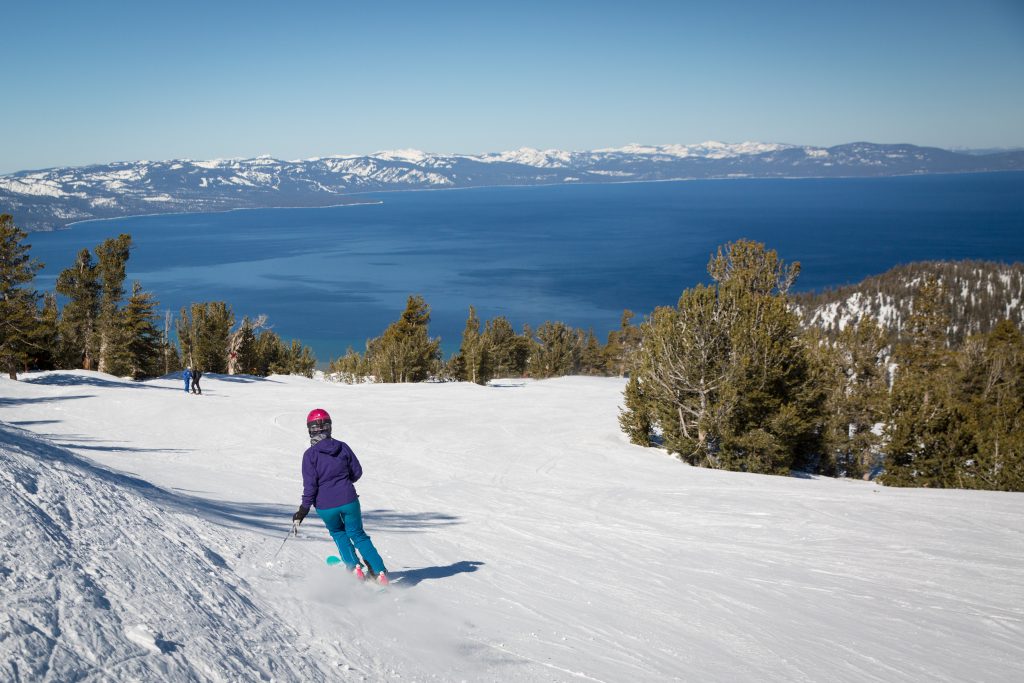 True to form, I was enamored with the fact that Heavenly spans across two states: California and Nevada. Literally, you’ll be skiing along and come upon a sign that gives you two options: skiing in Nevada or skiing in California. We bounced back and forth all day, crossing over the state line multiple times. Come on, that’s pretty cool! 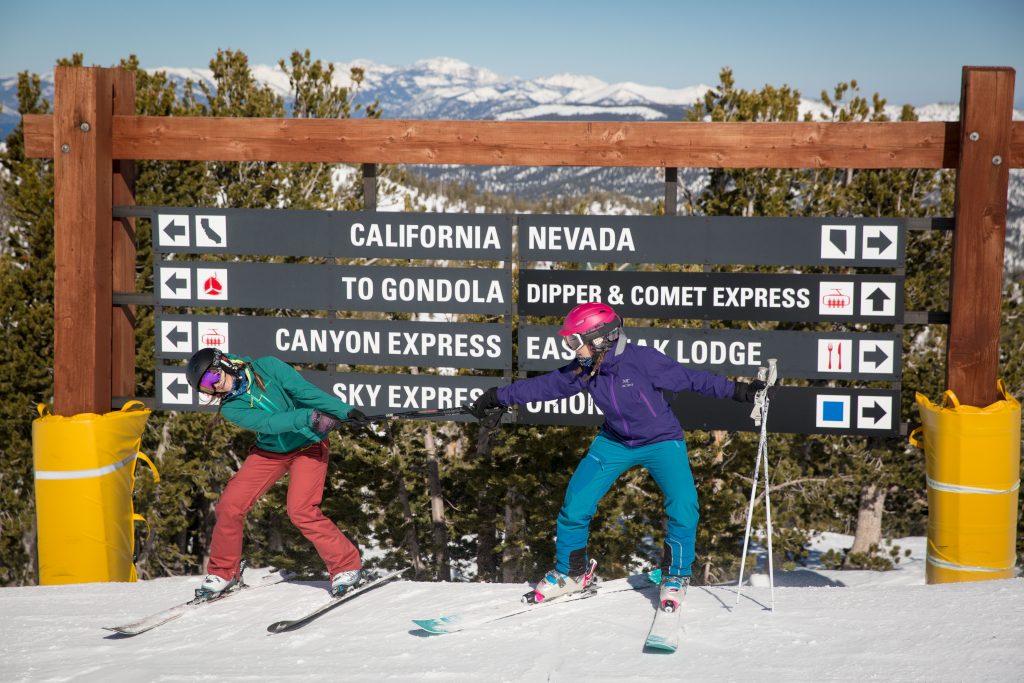 Of the two, I preferred Kirkwood to Heavenly. I’m sure it was user error, but I felt like we frequently ended up on catwalks at Heavenly and I kept getting confused as to WHERE we were on the mountain. And if we hadn’t been skiing with locals? Pretty darn sure I would’ve skied back to the Nevada base rather than the California base area where we parked…but again, I’m positive that’s just user error on my part! 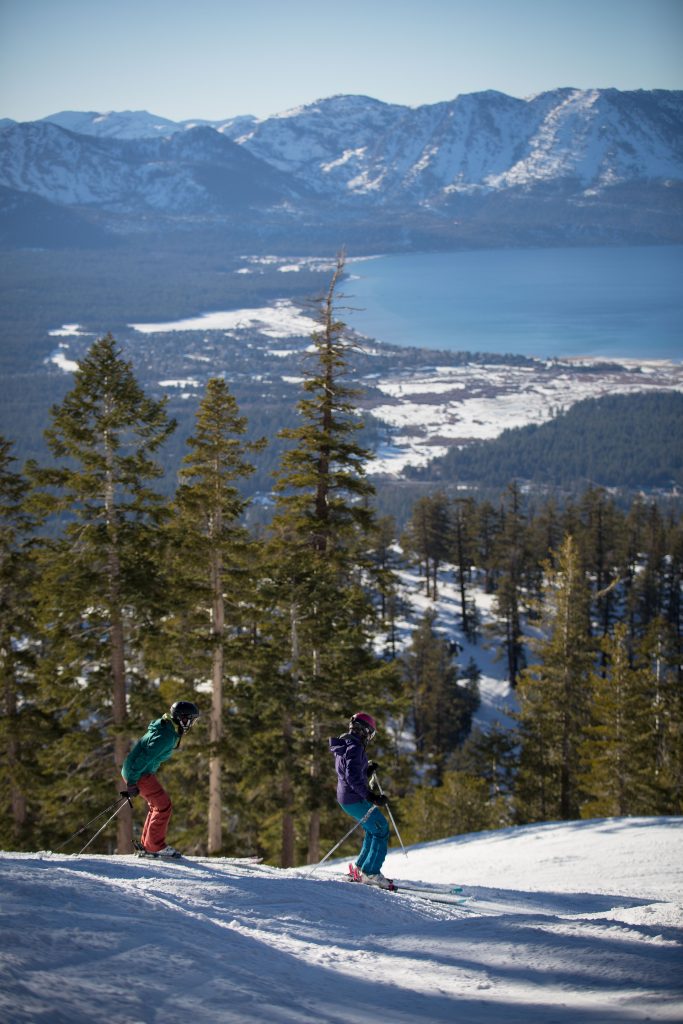