A Look Inside the Hardrock 100 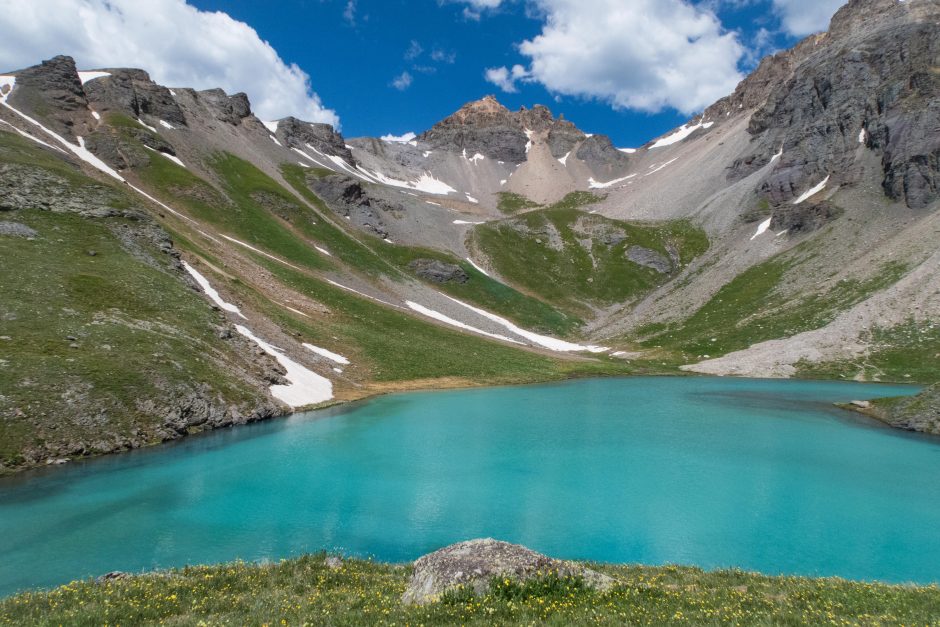 There is nothing worse than the grating sound of an iPhone alarm at 3:30 in the morning. Fortunately, I rarely set my alarm that early, so it’s a burden I don’t typically have to carry. However, that is precisely the time I shot up in bed this last Saturday. Thankfully, it was for good reason: I needed to get to the finish line of the Hardrock 100!

A few months ago, the team at Smartwool invited me down to Silverton with some other media folk. The reason? The 2016 Hardrock Hundred Mile Endurance Run. As the title sponsor, Smartwool has about as much pull in Hardrock as any brand can have….but that isn’t saying much. You see, the Hardrock 100 is notorious for being its own race and it doesn’t succumb to the pulls of the outside world. 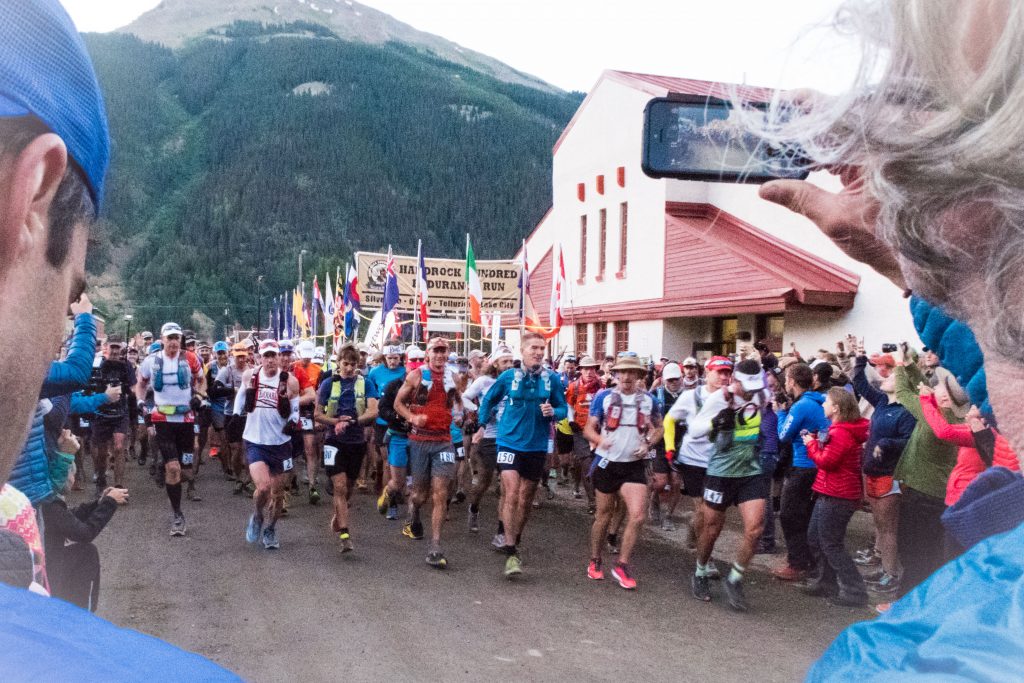 For example: there are plenty of elite runners who want to run the race, and don’t get to. Hardrock has one of the most complicated-yet-difficult entry systems for registration. First off, the race is considered a “post-graduate run,” meaning it does not accept novice runners. This isn’t for elitism; this is for the safety of the runners {but more on that later…!} After that, potential runners must do two things: 1) Meet the service requirement of 8 hours of volunteering at, for, or on a trail used by an ultra AND 2) Nab a finish at one of the qualifying 100 mile races {Barkley Marathons, UTMB, Run Rabbit Run and Pine to Palm, to name a few.}

But after all that, you’re still not at the race yet. 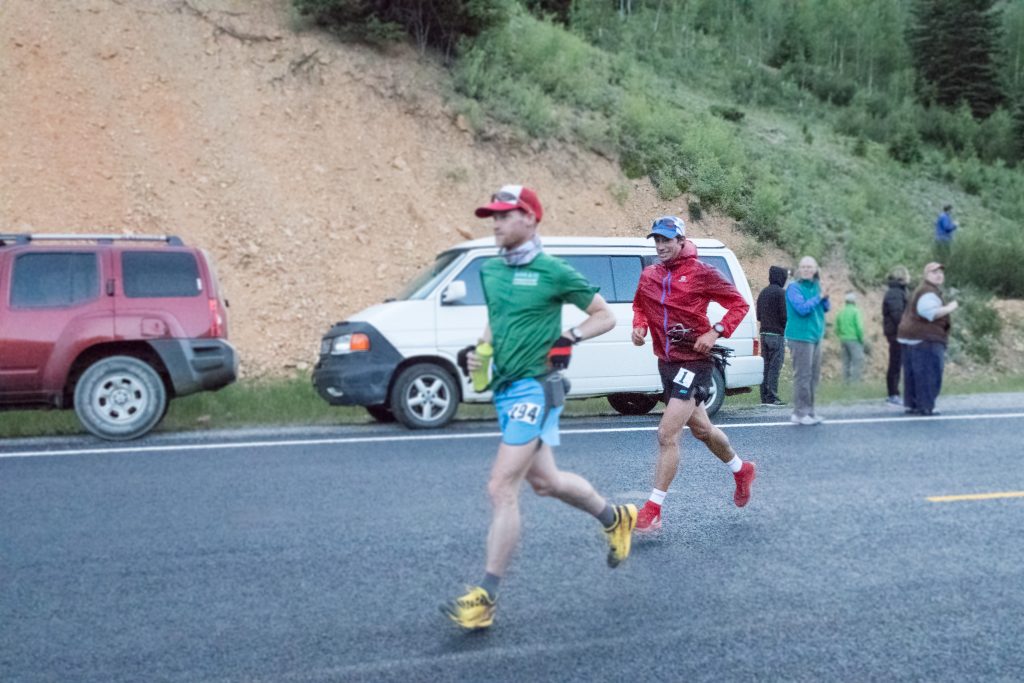 The one and only Kilian Jornet (in the red)

Even runners who meet all of the qualifications are not guaranteed a spot. This year, 152 runners were chosen from thousands of applicants. Two of those runners had guaranteed entries from last year as the male and female winners {but their numbers count against the lottery pool they would have fit in}. Then, 47 slots are reserved for first-timers, or runners who have never started the race. After that, 35 additional slots are reserved for race veterans, or people who have five or more Hardrock finishes. Finally, 70 runners are selected from anyone not in the previous two categories.

Whew! And that’s just to register for the race. What’s the course like? 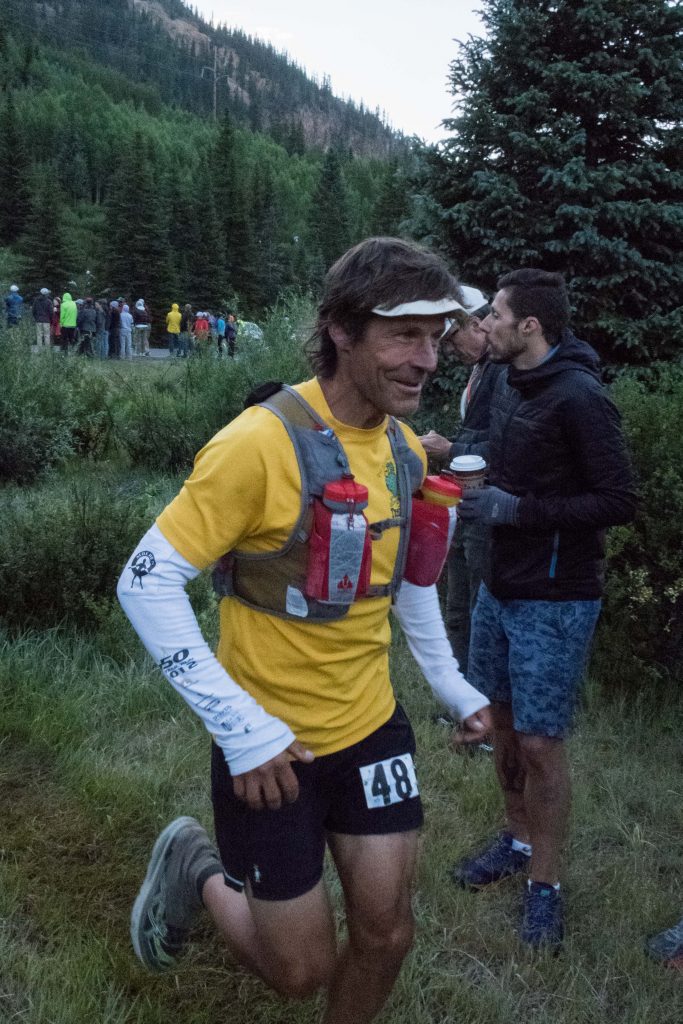 In a word, the Hardrock 100 course is insane.  There are four legs, linking together the mountain towns of Lake City, Ouray, Telluride and Silverton. There is 33k feet of elevation over the 100 miles, along with another 33k feet in descent. The high point is just over 14,000 feet. Can you even imagine what 66k in elevation change feels like on the quads?!

All that is to explain how physically demanding Hardrock is on the runners, and why I was so psyched to be there to witness it. I had a few friends on Facebook ask me if I was running it, to which I laughed. Y’all, I hiked ~10 miles near Island Lake on Friday and it was a tough trek that left my quads a touch sore. The kicker? That was only at mile 15 of the course…those runners still had 85 miles left. 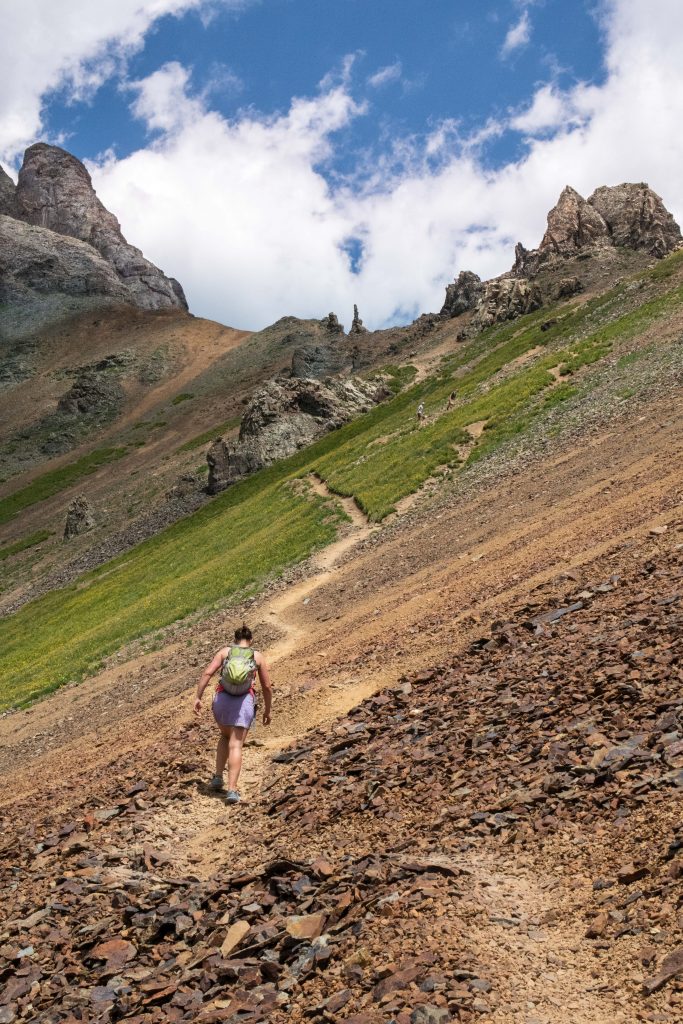 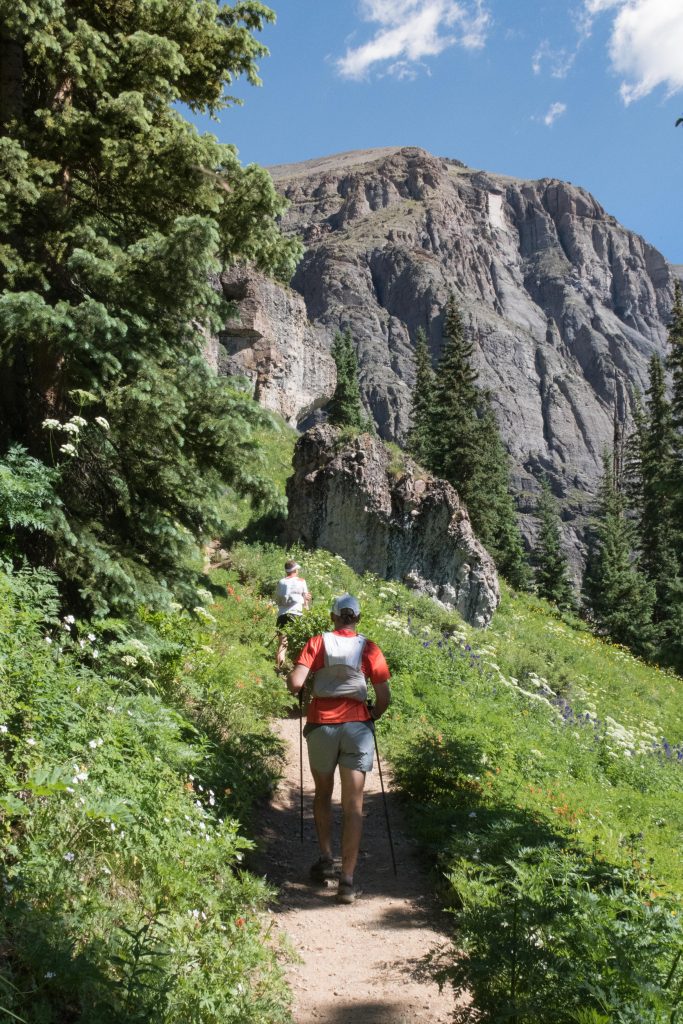 After trekking up to Grant Swamp Pass and catching the final three runners in the race, our crew hightailed it down to Ouray where we watched runners stumble in for the Mile 43 checkup. Kilian Jornet and Jason Schlarb {the eventual co-winners} had long since passed through, but we watched the majority of the male lead pack and the overall female winner, Anna Frost, come through. Even at mile 43, you could see the exhaustion on these runners’ faces. Not only is the course a bear, but daytime temps hit record highs on Friday!

I nestled into my cozy bed that night, thinking about the runners traipsing through the San Juans while I snoozed in my bed. The average runner finishes in 41 hours, so there was a good chance that they would be running through Saturday evening as well. However, runners like Jornet and Schlarb are not “normal” in any stretch of the word; they crossed the finish line together in 22 hours, 58 minutes, 28 seconds. 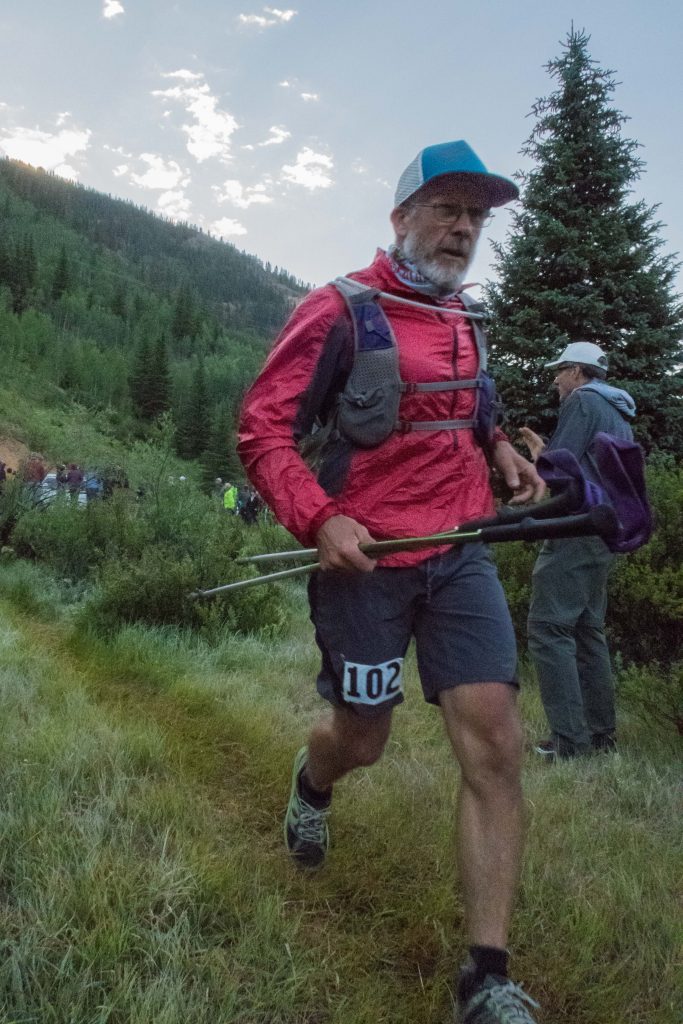 Yup, you read that correctly: a dual finish.

Jornet, last year’s winner and course record holder, and Schlarb ran together for the majority of the race. Trust me, I know: I was there, and I was constantly refreshing the race’s “spot tracker” while watching to see if one of them would pull ahead of the other. But in the end, Jornet and Schlarb chatted it out after the Cunningham Aid Station at mile 91 and agreed to finish together. After all, says Jornet, it wasn’t logical for one to outsprint the other over a one-minute time difference. 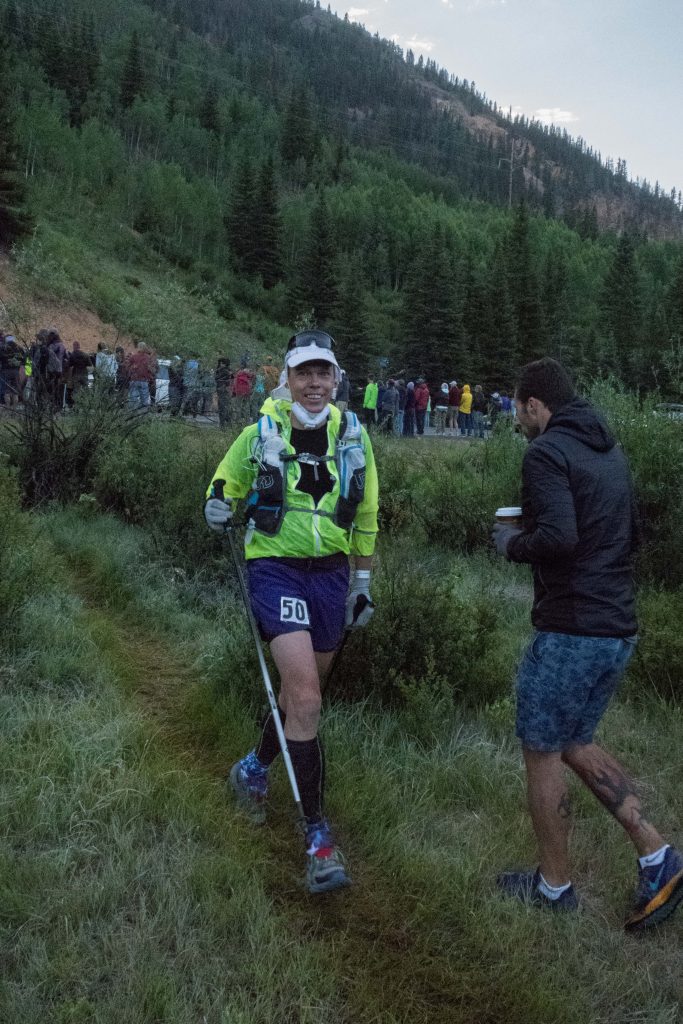 And so it was. Jornet and Schlarb crossed the finish line hand in hand before leaning over to kiss the rock, as per Hardrock tradition. Before they knew it, two chairs had been pulled out, blankets were folded over their laps, and a two dozen media were firing questions at them. While I didn’t ask any questions myself, I managed to catch the majority of the interview via Facebook Live, so definitely check it out if you’re interested. 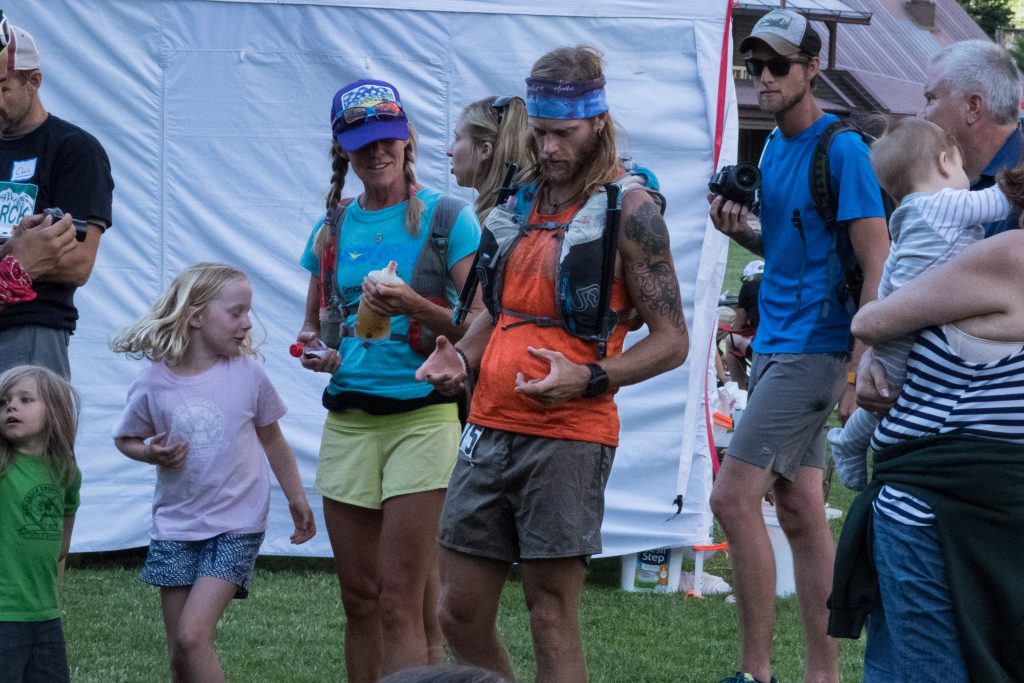 But beyond the dual finish, I was most excited for Schlarb. The happiness on his face was palpable since, as an interviewer pointed out, he had just run the race of his life alongside Jornet. When asked what the high point of the race was, Schlarb immediately responded: “Getting to know my lifelong trail running idol” while nodding towards Jornet. 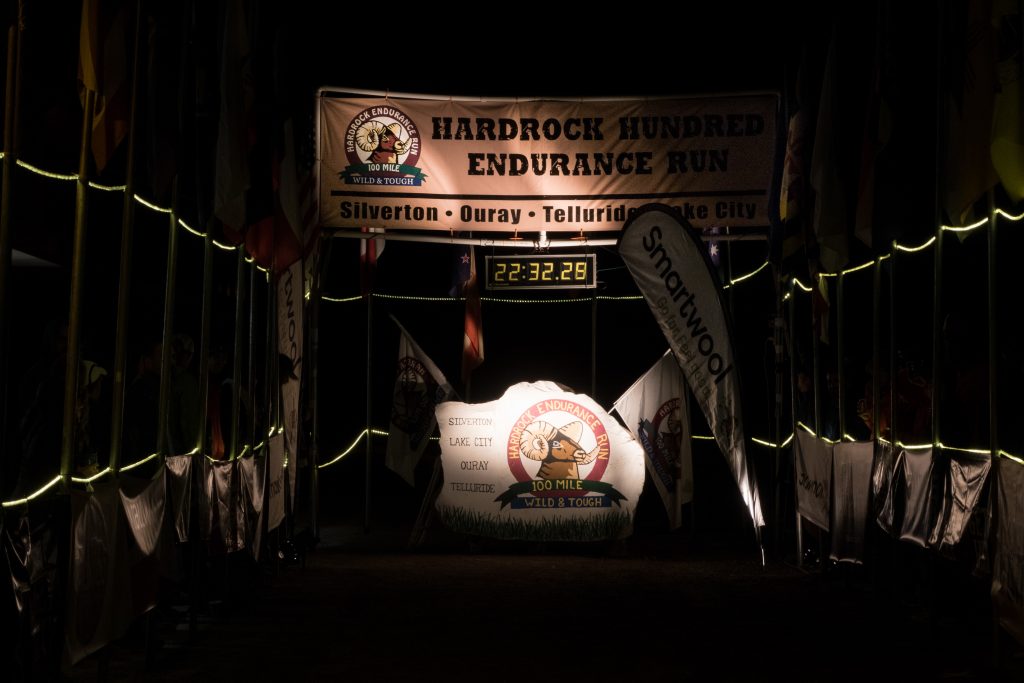 And you know, I almost think he was more excited about that instead of winning the actual race.

Huge thanks to Smartwool for the invite and the accommodations. I had a wonderful weekend!