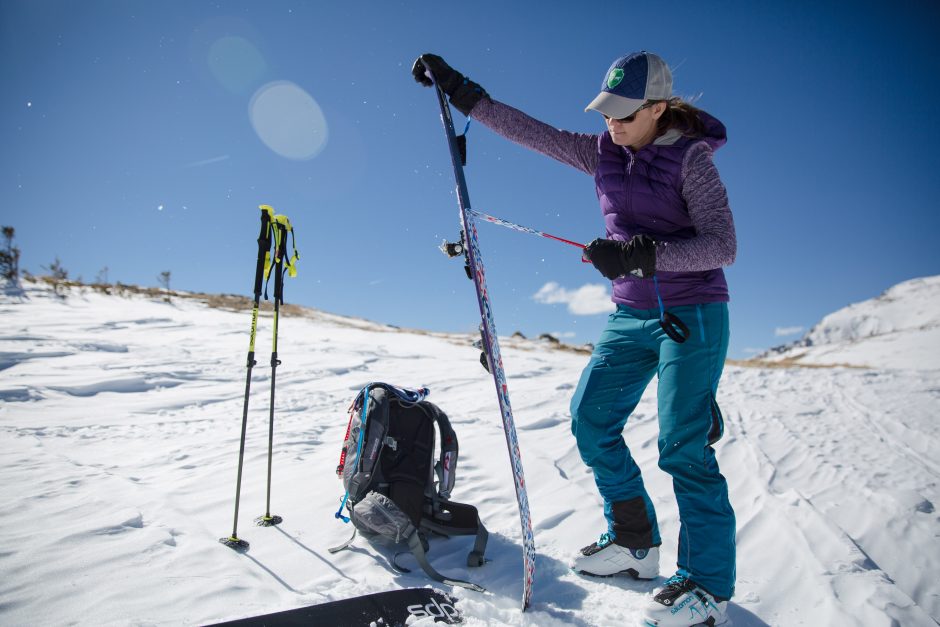 A few weeks back, Will and I decided to tackle a new-to-us adventure: venturing to an abandoned ski resort known as Geneva Basin. In many places, the onset of spring means the end of ski season. But one of my favorite things about Colorado is that it’s the exact opposite! With our sketchy snowpack {easily the most volatile in the country}, spring brings safer snow conditions in the high country. What does that mean for Will and me? All the backcountry skiing adventures!

Originally coined Indianhead Ski Area, Geneva Basin opened in 1963 on the backside of Guanella Pass. It was eventually owned by former Governor Roy Romer and operated for some years until permanently closing in 1984. 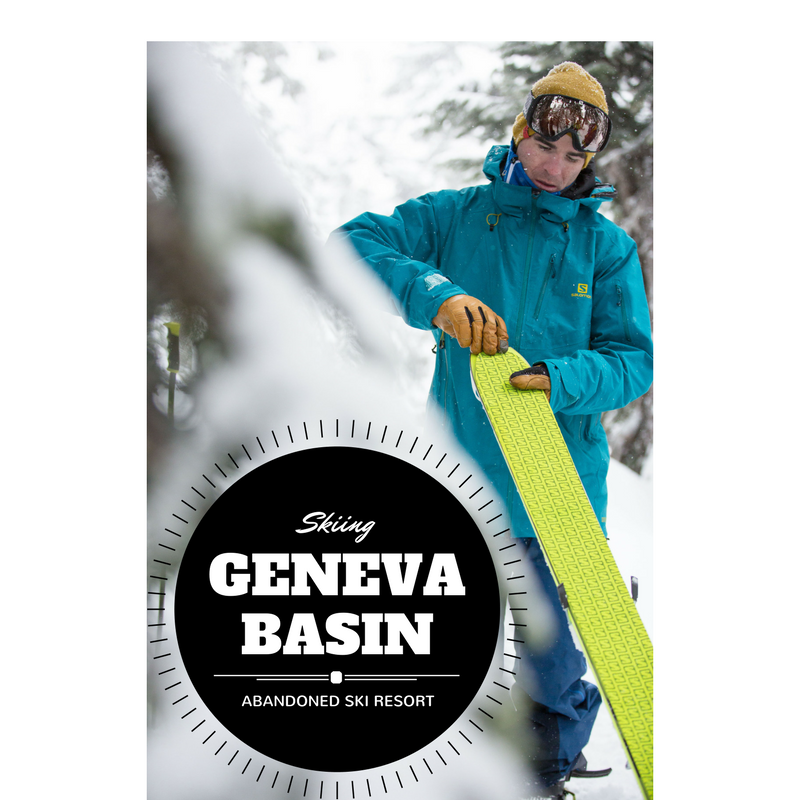 But the fun thing about an abandoned ski resort? The ski runs are still there– if you can get to them!

We originally planned to skin in on Saturday with some friends and camp out at the base of the ski area on Saturday night, leaving us with two solid days of skiing. Alas, life got in the way and Will and I couldn’t make it up on Saturday. Instead of scrapping the trip, however, we opted to wake up SUPER early on Sunday to skin into the base, run a lap, and ski back out. 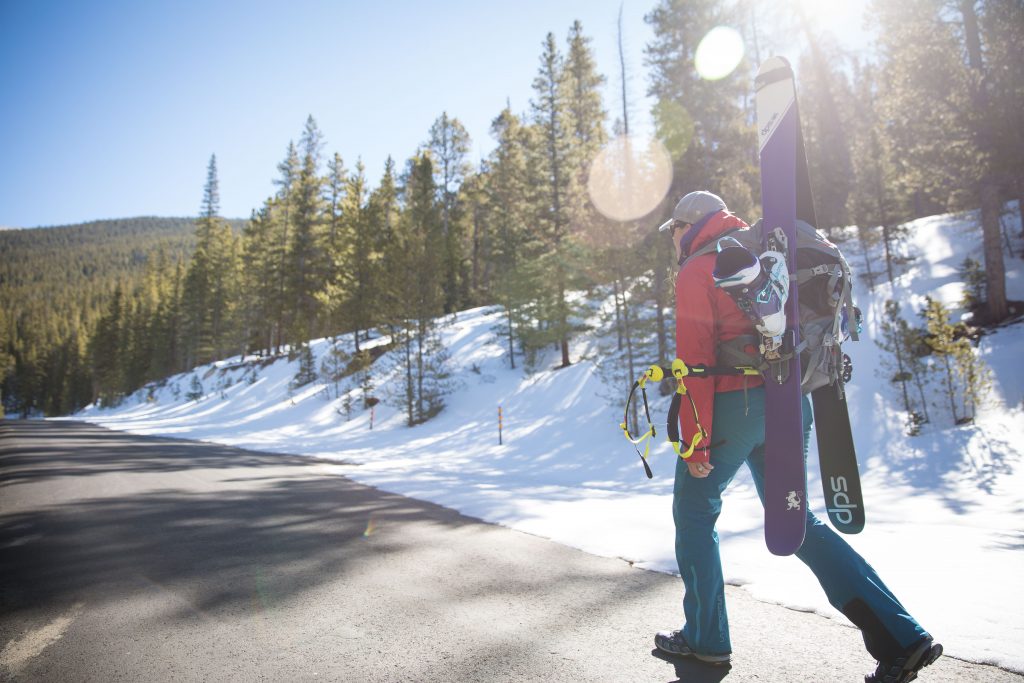 There are two options when skinning into Geneva Basin: approaching from the north or the south. If from the north, you have to skin up and over Guanella Pass before dropping into the basin where the ski area is. Will had done this previously and said that it would be a lot of climbing for a single day trip. As such, we opted to approach from the south and highway 285.  We knew this would be sporting when we got a text from our friends on Saturday: “Heads up guys: there is a locked gate at the base of the pass. And there is no snow as far as we can see on the road.”

Not easily deterred, we still awoke early, drove up to the south entrance, and found the locked gate. Sure enough, we were not driving around that metal barrier….and there was definitely no snow on the road. To complicate our situation further, I realized I was an idiot. I’ve been struggling with my backcountry ski boots for months, constantly battling blisters, hot spots, and losing toe nails. Finally, as a surprise, Will bought me a new pair of Salomon ski boots {yay!} This was my first outing in them and I was psyched to give them a try…until I went to pull them on and realized they had no insoles. Whoops!

I tried pulling insoles out of the shoes I was wearing but they unfortunately did not fit. At this point, we were left with a decision: suck it up and tackle the day without any insoles or cut our losses, pack it up and head back to Denver. 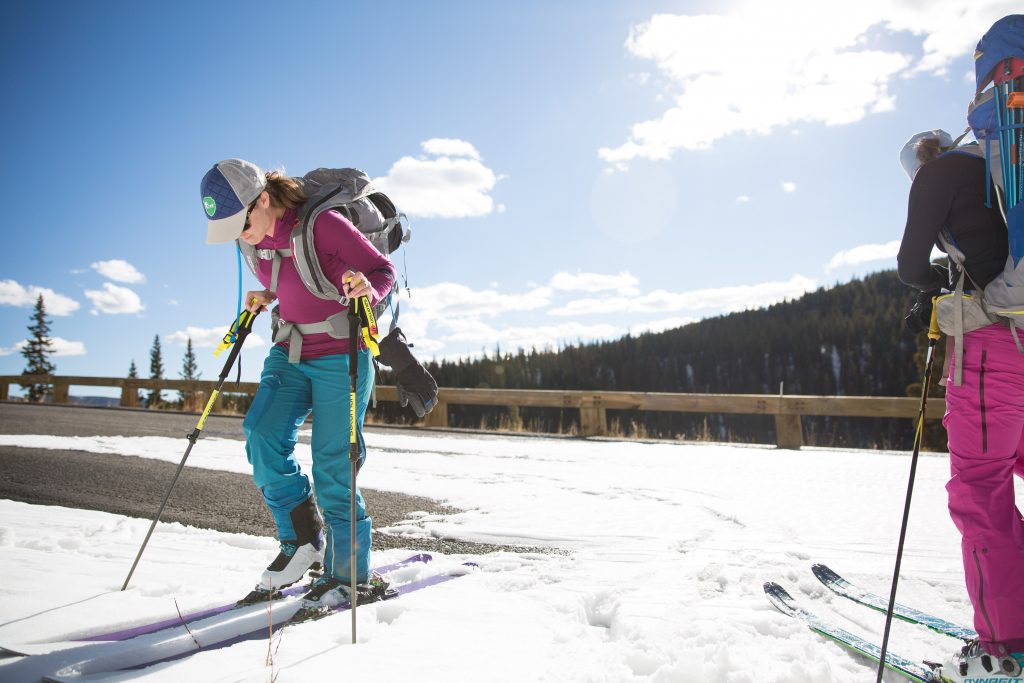 Obviously, we chose the former. After all, why did we get up at 4am?!

Because the road was dry as a bone, we stayed in our hiking shoes and A-framed our skis on our daypacks. It made for some heavy backpacks, but it was the only choice we had. Then, we began hiking the road.

Hiking with skis is never anybody’s favorite thing, so we tried to make the best of it. I discovered that wedging my ski poles underneath my pack transferred the weight from my back to the poles. I had a brief moment of concern when I worried about snapping a pole, but then I decided I didn’t care– this way way more comfortable!

Will and I hiked for a mile or so, watching the snow gradually creep back onto the pavement. Eventually, the road had a light covering of the white stuff, so we decided it was time to skin up. Sure beats hiking! 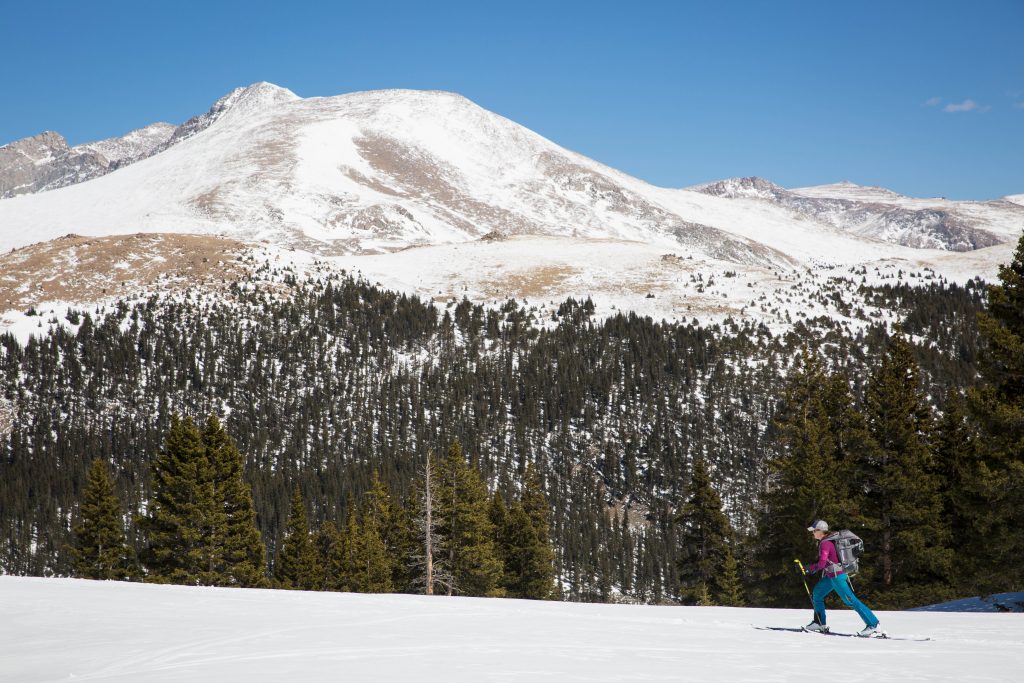 From the gate to the Geneva Basin, it is roughly four miles so we still had a trek ahead of us. And for awhile, our skin was no big deal. Snow covered the road, we were steadily climbing towards the pass, and our spirits were high. Any day outside with my husband is a good day, yanno?

But then things got….tricky. The road took a sharp switchback and turned left, entirely changing the aspect of the pavement. Almost immediately, it was clear that the sun had melted all of the snow. Blank patches of black pavement appeared and Will and I continued skinning towards the side of there road where the snow still lived. Eventually, we weren’t even on the road– we were in the grassy ditch alongside it. And for awhile that worked, but it became a “choose your own adventure” of sorts. Not wanting to take the time to remove our skins and skis, we found ourselves picking our way through rocks, desperate to make contact with any snow. Eventually, we knew it was ridiculous and threw in the towel: time to remove the skis! 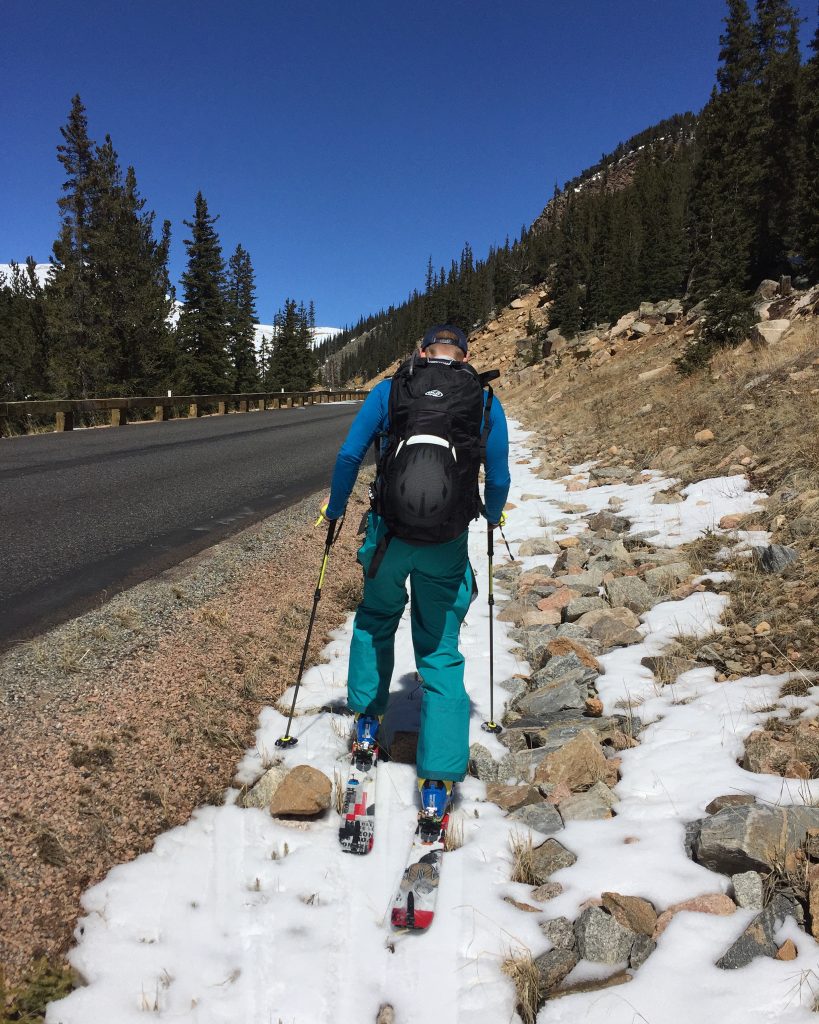 Do you ever have those moments where you just think to yourself, “What the F am I doing?” This was one of those moments. Not only were we carrying our skis far more than we wearing them, but hiking in my insole-less ski boots was killing my feet. I had hot spots and blisters all over the place, and Geneva Basin was nowhere in sight. WHAT.

Thankfully my husband knows me well! He plopped us down on a guard rail and dug through his pack to find some chocolate-covered anything snacks. When I get cranky, food is typically the answer, and if it’s chocolate? Even better. Sure enough, he bought my love with food that day, and my energy returned. I was having fun again!

We hiked the remainder of the road, carrying our skis in our arms rather than taking the time to re-secure them to our packs. It was a welcome sight when we hiked around the corner to see a mountainside filled with snow-covered ski runs. Geneva Basin! 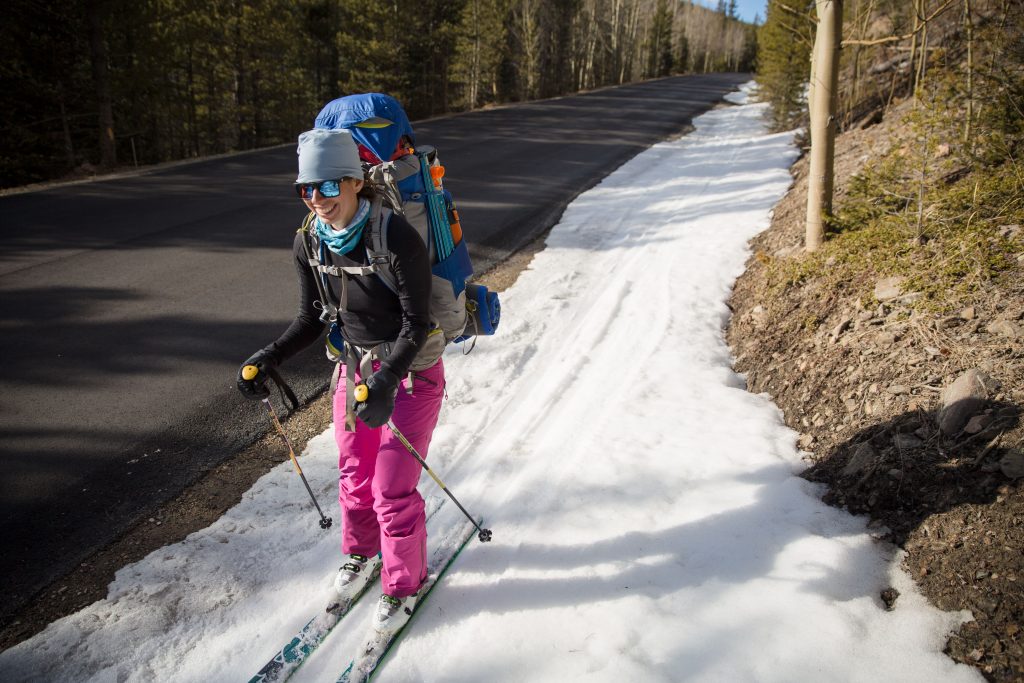 We immediately saw our friends’ tent in the valley at the base of run, so we strapped our skis back on and headed that way. Miraculously, Danny had just finished skiing a lap and was beginning to skin back up to the top to meet his wife. Instead, we all hooked up and skinned up the mountain together.

The skin up to the top wasn’t easy. It was a bluebird day so the heat was blasting down on us but the wind was wicked. There were a few moment when I had to hunker down to get out of the gales; I was afraid I’d get blown right over. Thankfully, it didn’t take us *too* long to get to the summit and I let out a gleeful whoop when I saw the little cabin. It was the old ski patrol hut! 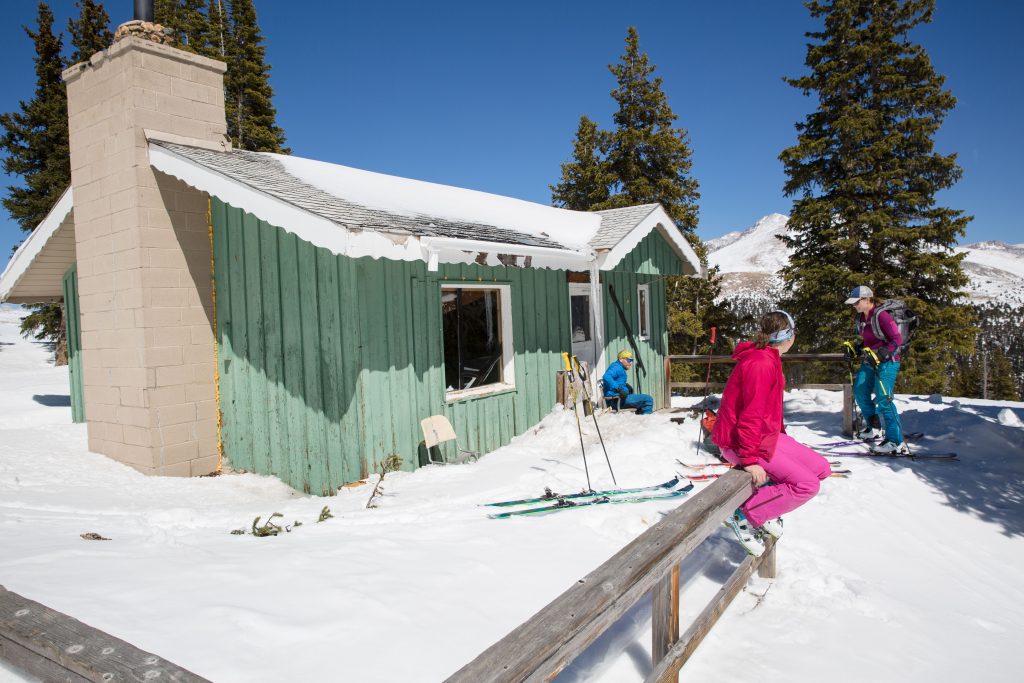 Hands down, this hut is my favorite part of Geneva Basin! When the resort was in operation, it was used as a ski patrol hut but these days, it is the only remaining structure from the resort’s glory days. I read somewhere that the Forest Service originally planned to tear it down, but a group of locals got involved. They promised to take care of the hut and somehow everyone agreed on keeping it intact. Users can sleep in it if they want, but it is kinda dirty. It does have a wood burning stove though, so if you had wood, you could totally head it up all cozy. Plus, there is an old trail map on the wall so you can look at your options for ski runs! 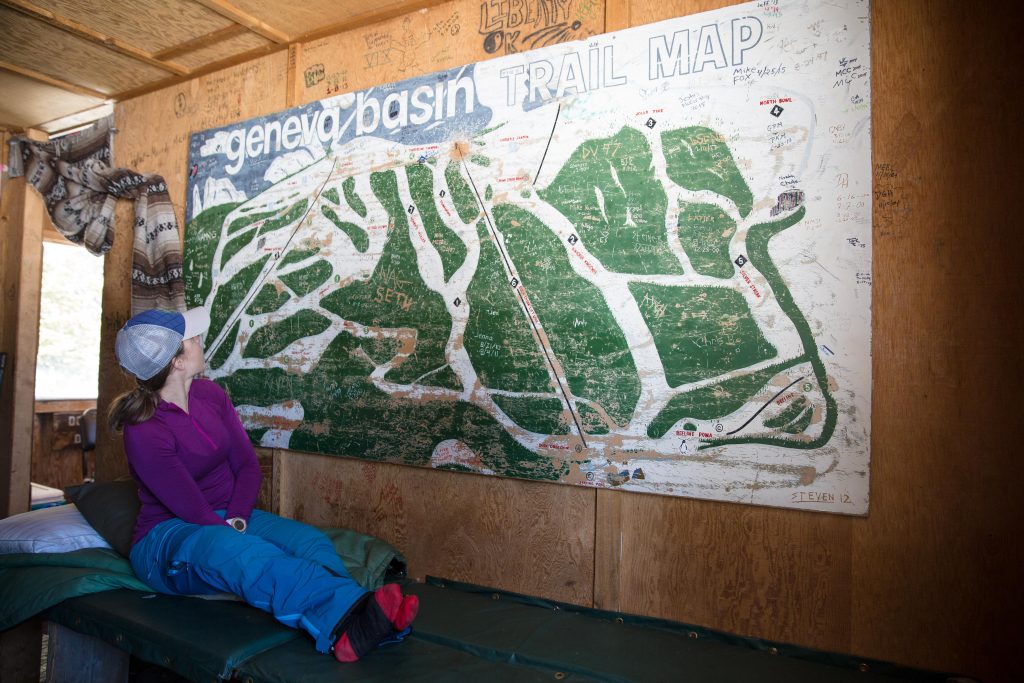 After the exhausting, multi-faceted morning of skinning, I was pretty damn tired. Danny and Rachel skied back down to begin tearing down their camp while Will and I pulled a couple chairs out on the deck and basked in the sunshine {maybe a bit too much. I ended up with a wicked burn!} It felt so good to sit in the sun and soak in the scenery. Moments like this are what makes all the sweat and pain worth it. 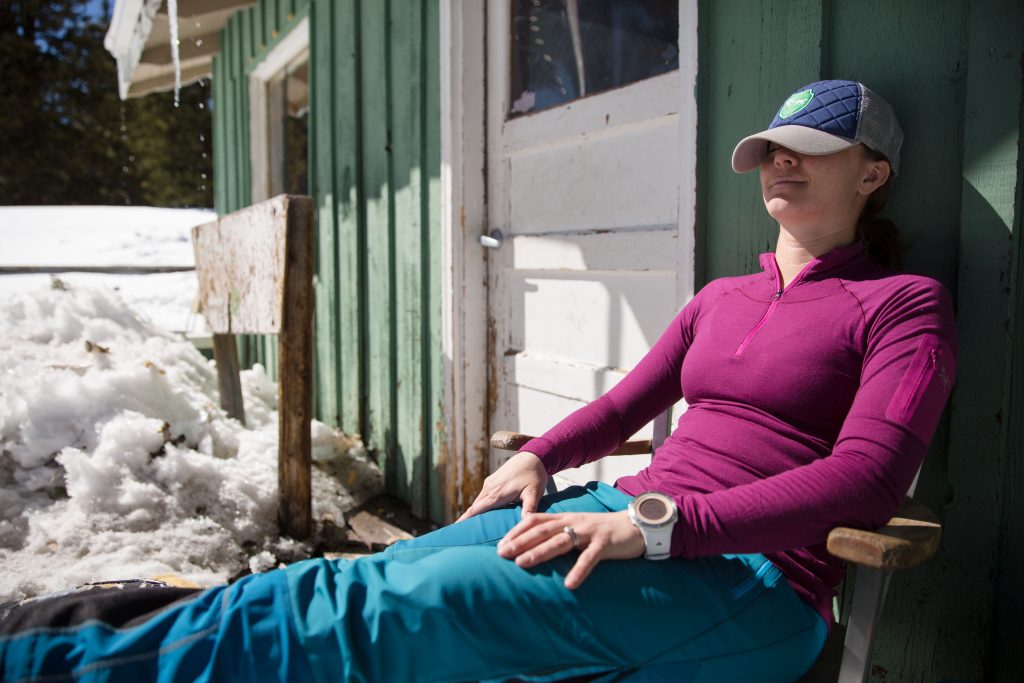 Eventually, Will and I noticed the sun dipping lower on the horizon and knew we needed to get back. After all, we still had the four miles of road. When covered with snow, we could easily ski down in 30 minutes, but since so much of it was dry, we were going to have to hike a bit.

We chose a run that we had seen while skinning up and enjoyed the rewards of our skinning.  We ended up skinning/skiing 11 miles with a couple thousand feet of gain, which was definitely a big day. And when I told my mom about it, she asked me if it was worth it, all that work for a single downhill run.