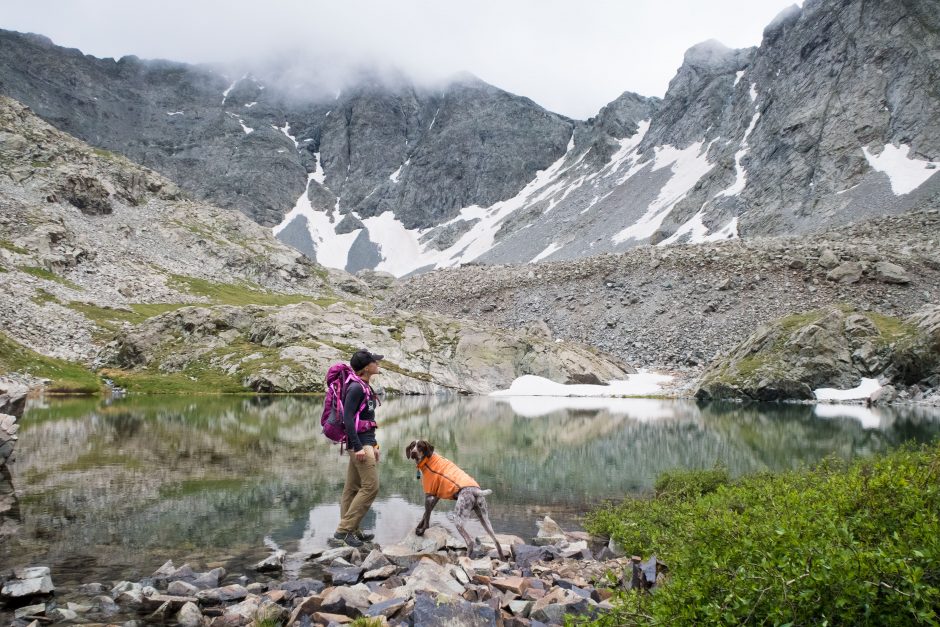 Do you ever have those weekends when madness ensues? You know, you start out with Plan A and devolve to Plan D….and readily end up around Plan Q? That was our Independence Weekend trip to South Zapata Lake!

For months we had been planning to return to Capitol Peak. Ever since our first trip a few years back, Will and I have both wanted to return if only to actually stand on the actual summit of Capitol. Unfortunately, Mother Nature can be a jerk and she decided to throw us a curveball. Rather than 2013’s bluebird sky and wildflower-filled meadows, Capitol was looking at violent rainstorms and snow-filled campsites. Not ideal.

Not ones to be deterred, we gathered with our friends and came up with an alternate plan. The Sangre de Cristo Range was forecasting better weather, but still not perfect. Rain was predicted every day, but it was with less frequency. A long weekend in the Sangres? Don’t mind if I do! 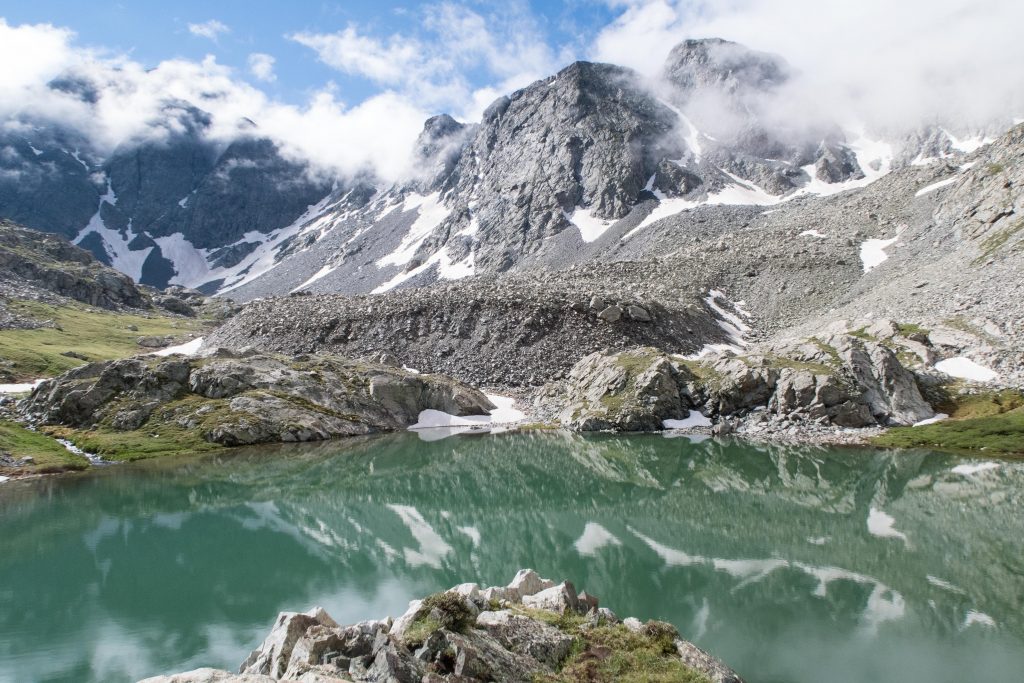 Guys, all of these photos are mine! Loving my new camera and Will has been teaching me so much!

Our target goal: South Zapata Lake. This alpine lake is located on the backside of Ellingwood Peak, one of the 14ers in that range. Most people access Ellingwood and Blanca via the Lake Como trail, but I’ve vowed to avoid that trail for the rest of my life, if possible. You see, it’s notorious for its rough 4×4 trails {read: I’m talking holes that are deeper than I am tall} so it is filled with jacked up jeeps and trucks, winching themselves to trees to navigate the depths of the nasty road. For 4×4 enthusiasts, I’m sure it’s awesome. But if you’re a backpacker trying to hike? Sucking fumes all day is less than ideal.

Instead, we opted for this lesser known and rarely used approach from the other side of the peak. Day hikers will occasionally trek up to South Zapata Lake, but it’s a steep hike that tends to be tougher than most day tourists at the nearby Great Sand Dunes NP want to deal with. For the entire weekend, we were the *only* group camping anywhere on the entire trail.

After all the twists and turns in the planning, our group of ten shrunk down to a stout group of six people. Megs and Mikey planned to head up early Friday morning, while Will, Josh and me arrived closer to sunset. Morgan had to catch up on some work, so she planned to meet us at our campsite on Saturday.

But it sure didn’t happen that easily. 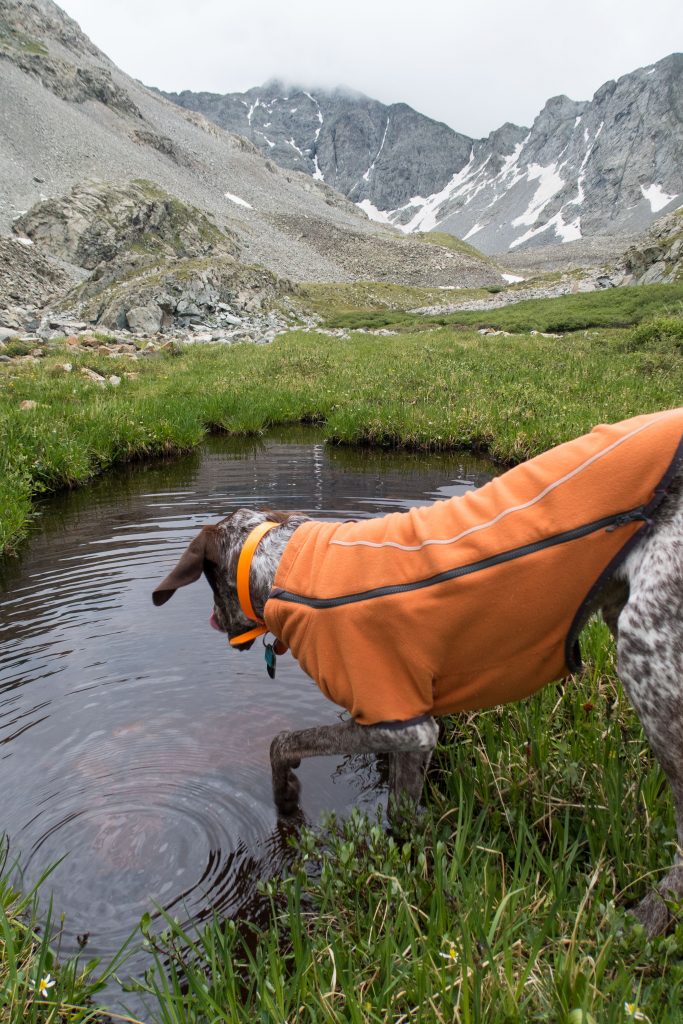 Will, Josh and I left the house late, for starters. And then, while driving towards the Sangres, we watched this wicked black thunderhead sit right on top of the lake, likely drenching Megs and Mikey. This was confirmed when a rogue text popped on Will’s phone from Mikey’s DeLorme messaging device: Huge storm rolling through valley. Waiting it out under a tree.

We were off to a good start!

Our trio finally reached the trailhead around 6 pm and set out at a brisk pace, amidst the sea of pterodactyl-sized mosquitoes. {What is WITH those damn bugs this time of year?!} The trail almost immediately began to climb at a relentless pace, but Josh and Will were cruising so I tried my best to keep up! 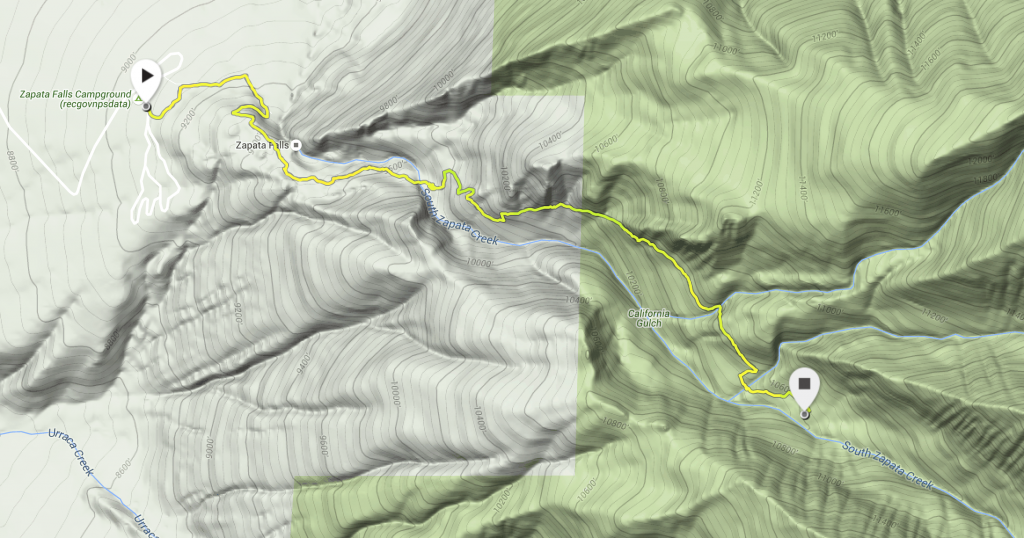 Megs and Mikey had used their DeLorme to tell us they had stopped prior to South Zapata Lake. According to their data, we were looking at 3.9 miles before we should find their campsite. Of course, it was a wonderful surprise when we saw Monty, their dog, bounding around the corner at mile three. Night was falling, the trail was getting dark, and it was still raining; I definitely didn’t mind a surprise early stop!

Saturday morning dawned cloudy and drizzly….again. However, the rain wasn’t so bad so we decided to throw together our day packs and hike up to Zapata Lake to check it out and scope for higher campsites. If we found a good one, we planned to move our base camp so that we would be closer on Sunday morning’s attempt of Ellingwood. 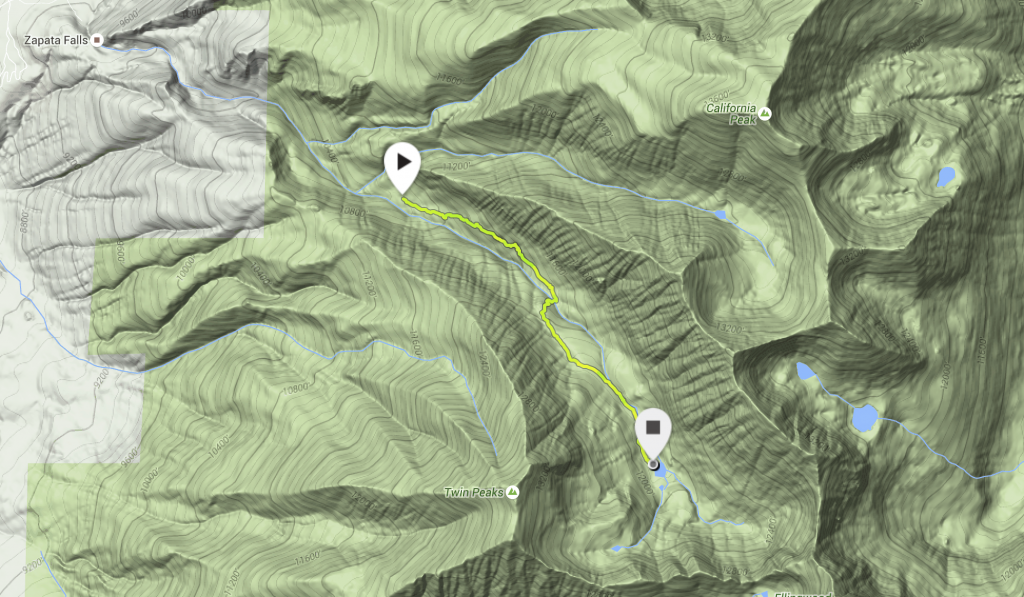 Sure enough, the trail continued to climb at a steep pace and I thank my lucky stars that we had spent the night curled up in a tent rather than wandering around the alpine single track. We did manage to find the world’s best campsite just at treeline, so we encountered a quagmire: What should we do?

It was Saturday afternoon and we still hadn’t seen Morgan. Chances are good that we would see her on our return trip to gather our stuff from campsite #1, but we didn’t want to make her hike back down only to turn around and hike back up with us. Instead of that, Will offered to carry *all* of my stuff from camp #1 to camp #2. As for me, I was charged with sitting at camp #2 in the hopes of catching Morgan before she trekked on by. Not a bad deal….for me! 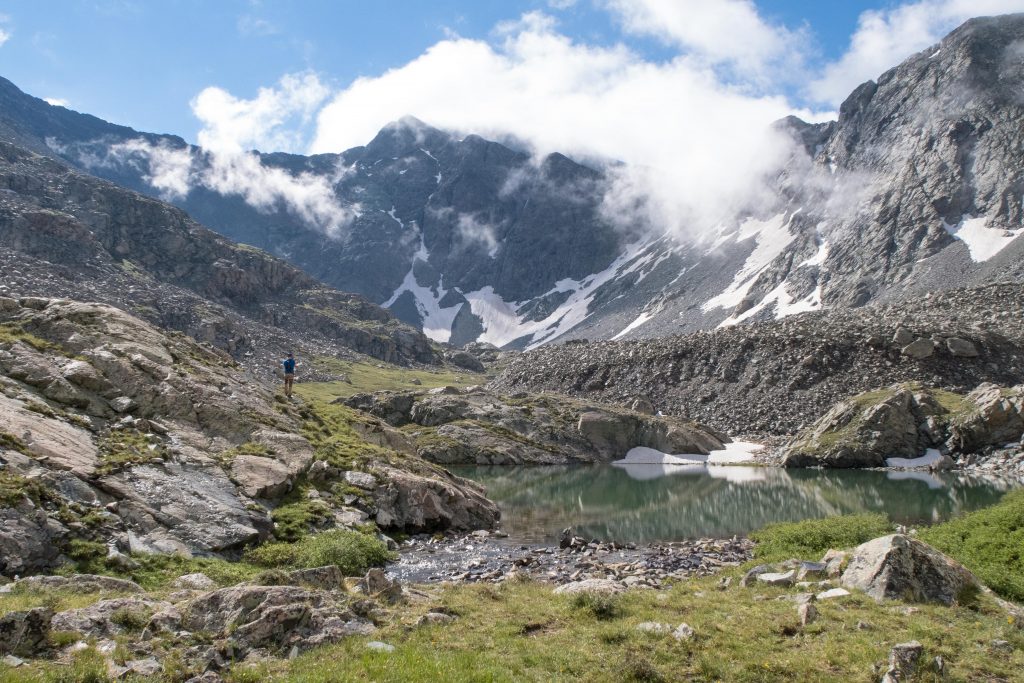 Based on our estimated time tables, I’d be hanging out at our second campsite for 3-4 hours by myself. I had my daypack with water, snacks, my camera, a rain shell, insulation, and gloves, but that was about it. Never deterred, I set about keeping busy to pass the time: I attempted to build a fort (fail), I hiked a nearby peak, I snoozed in a meadow of flowers, and I experimented with my new camera. I was about halfway up a rocky talus field when the next round of rainstorms moved in, dousing me with tiny pellets of hail. It didn’t hurt, but I sure hightailed it back to camp!

After that, the weather dramatically deteriorated. I used our walkies to call down to everyone else, trying to figure out where they were. Campsite #2 was stuck in an alternating pattern of rain and hail, so I was mashed under a tree trying to stay dry while I waited out the hours until everyone else returned. Thankfully, my husband is a freaking hero and was concerned about me hanging out solo above treeline sans shelter, so he completed the fastest EVER return trip. When I saw him huffing up that incline towards me, his pack busting at the seams with all of our gear, I was shocked. Instead of 3-4 hours, he did the entire trip in one hour 45 minutes. Sure, he was drenched with rain and sweat, but his smiling face has never looked so handsome to me!

We set about pitching our tent quickly in hopes of getting it up before the hail turned into rain. While doing that, the others arrived with their gear…but still no Morgan. Where was she?

We managed to pitch all three tents before the commanding thunderstorm rolled into the valley. And y’all, hands down, this was the most extreme thunder and lightning storm I’ve ever experienced from a tent in my entire life. It was crazy! 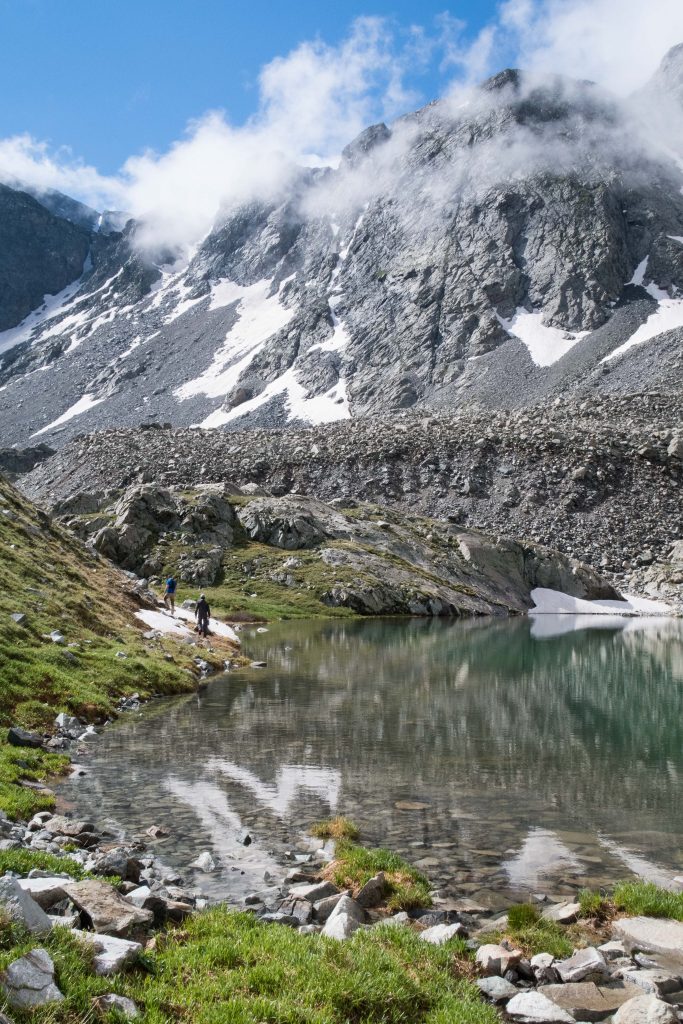 Obvi I didn’t shoot in the middle of the storm…but the nasty weather sure made for scenic views afterwards!

Will and I holed up in our tent for 2.5 hours, listening to thunder crack against the walls of the mountains and lightning fill the sky above our heads. Hail beat against the walls of our ultralight shelter and I thanked my lucky stars that UL gear has come as far as it has. Eventually, the novelty of the storm wore off and I fell asleep, lulled by the crunching noise of hail thumping above my head.

I eventually awoke to the sounds of JetBoils running and our friends talking, so I crawled out of the tent to survey the damage. Patches of thick hail covered the ground and trees and gear alike were soaked with remaining moisture. The clouds still socked in the basin too; morning attempts at Ellingwood were looking unlikely at best.

But still, where was Morgan? We all gathered around, considering the options. The girl is incredibly athletic and independent; she knows how to take care of herself. If she was stuck on the trail in that storm, we knew she would pitch her tent for shelter. It was possible that she was lost, but since we were the *only* campers in the area, there was no possible way she had missed us. In the end, we decided she had likely looked at the weather on Saturday morning and seen that it had changed from questionable to worse, and opted not to come. 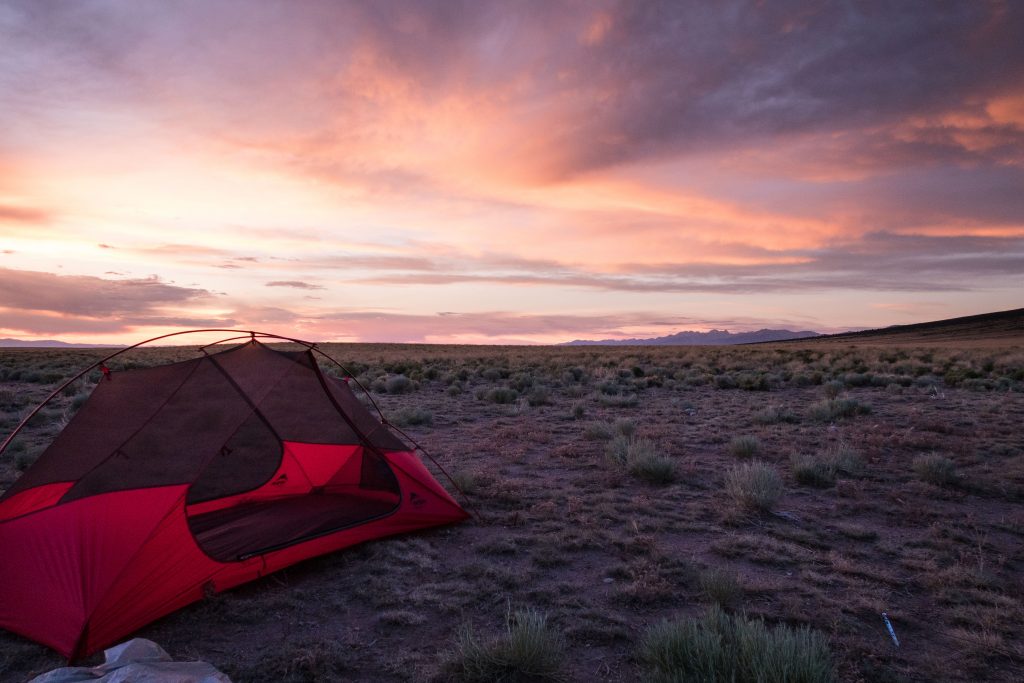 Will and I awoke at 5 am on Sunday to investigate the weather. Clouds socked in the valley and we couldn’t even see Ellingwood; the summit bid was off. Sadly, we scampered back inside our sleeping bags and went back to sleep. If there was climbing, might as well snooze for a few more hours!

I eventually rolled out of our tent at 7 am. The weather was looking much better but still patchy in spots. We all agreed that while we may have made the summit, it was smarter to have avoided it. Because we were attempting the peak from the backside, there was no set trail; instead, our route involved a choose-your-own-route scramble up a massive talus field. Should a storm have rolled in, there was no easy escape from there ridge.

Instead, we called an audible. The day still called with off-and-on rain showers and quite frankly, we were tired of being wet. Rather than spend Sunday night in yet another rainstorm, we came up with a Plan G: we’d pack up camp, hike back to the trailhead, and cruise over to the Great Sand Dunes National Park. Since Josh had flown in from Seattle, he had never been and while we couldn’t acquire a backpacking permit, we could easily do a night hike out onto the dunes! 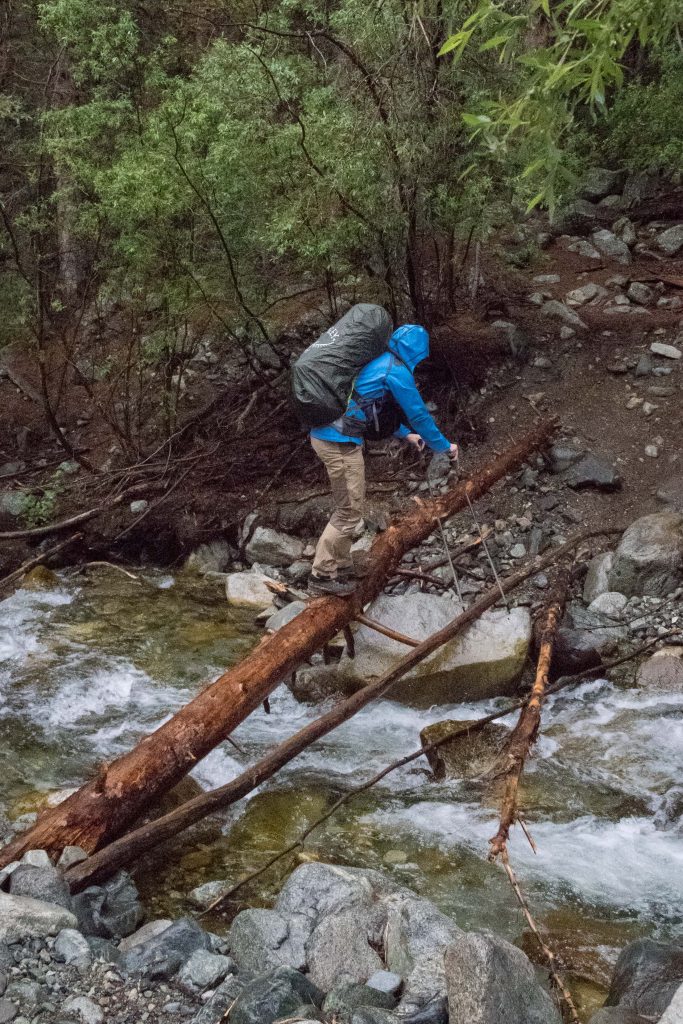 Reenergized by yet another change in plans, we began our hike back to the parking lot. At this point, we realized how nasty the previous night’s storm had been: parts of the trail were washed out, rocks rolled down the steep section of dirt, and tiny streams were now raging river crossings. We had just completed sketchy river crossing #2 when we heard a tiny voice float up above the shrubs: “Will, is that you?!”

Lo and behold, out from the greenery walked Morgan! Turns out, she had come up the night prior and had begun hiking at dusk. At some point, she had discovered a small social trail and it led her up an entirely wrong ridgeline. Once she realized she was heading the wrong way, she did the correct thing and returned to the main trail, set up her tent, and stayed put until morning when she could see everything again. And y’all, I am so thankful she did: if she had attempted that river crossing at night, she may have been in such a world of trouble!

Now that our group was back together, the wet weather seemed like a thing of the past. We hiked back down, spent the afternoon eating pizza and ice cream in Alamosa, and then headed into the sand dunes around 9 pm. With only the lights from our headlamps, we spent 45 minutes trekking upwards, unaware of the steepness of the sand in front of us. Eventually, we decided to call it and flopped down on the dunes to admire the sky. There is seriously nothing like the starry sky in southern Colorado. No light pollution and a solid Milky Way? Yes please! Will even taught me how to shoot night photos, and I snapped my first-ever star gazing photo. What do y’all think?! 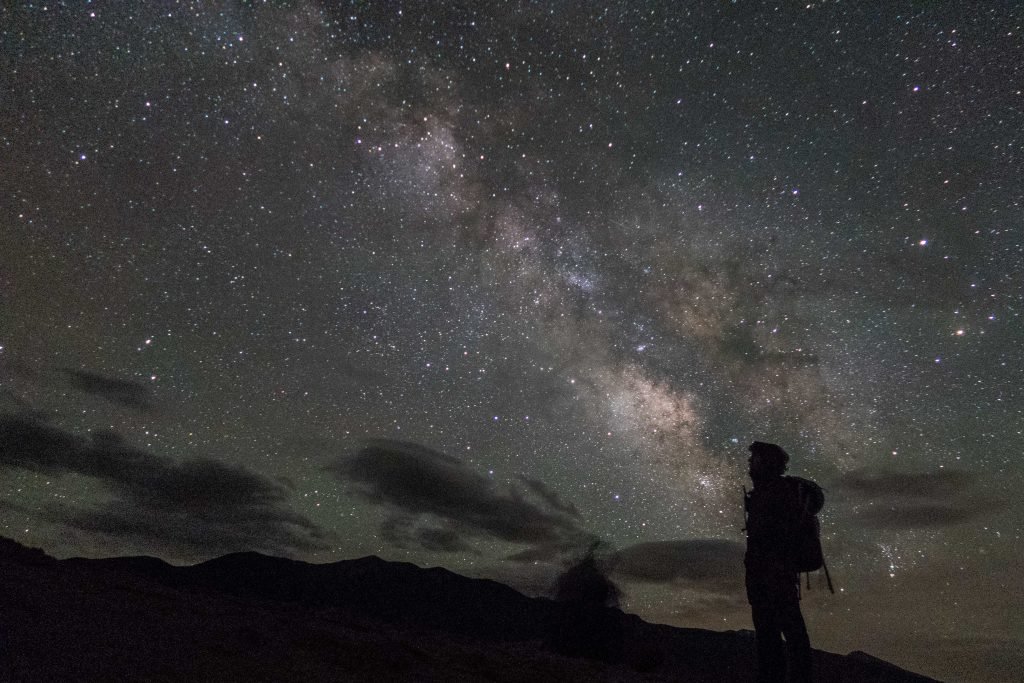