Backpacking with a Baby: 6 Tips To Get You Started 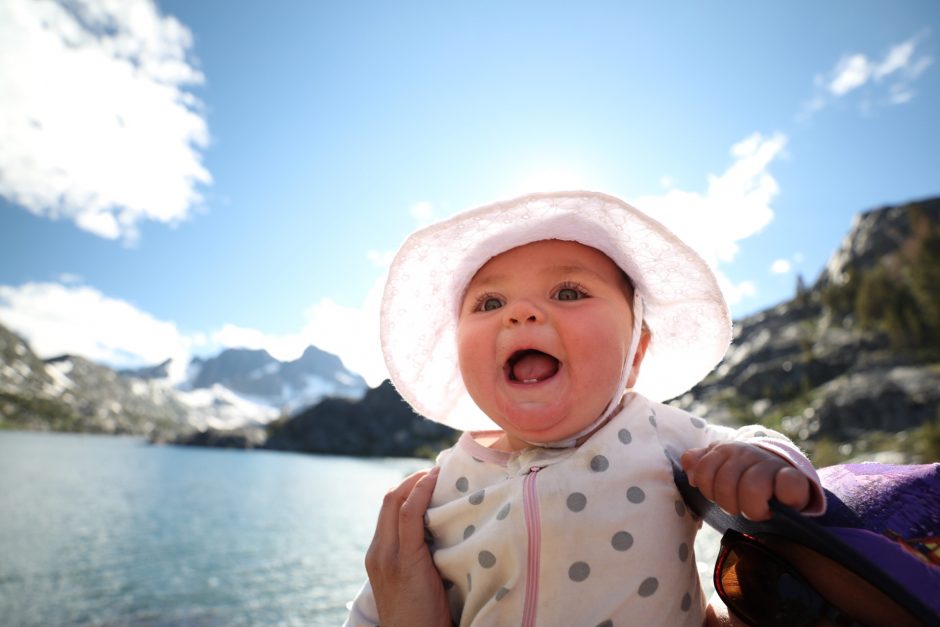 Guys, we did it. We went backpacking with a baby not once but TWICE on our road trip. And, our second voyage was a four night/five day trip in California’s Eastern Sierra up to Thousand Island Lake. Not to pat myself on the back, but….BOO-YA!

In all seriousness, there is a huge misconception that outdoor fun ceases the second a baby pops out. And while there are a million excuses to help you back out of your planned trip once you have an infant, there really isn’t any legitimate reason to do so. Sure, it takes more work and determination, but outdoor fun shouldn’t cease once that bundle of joy arrives.

Considering finding some wilderness with your babe? Here are some tips to get you started:

Plan for Heavy {Or Phone a Friend}

It sounds obvious, but plan on a {much} heavier pack than you are used to carrying. Backpacking gear weighs a lot to begin with, but once you add in the baby gear, the pounds increase seemingly exponentially. Your tent goes from a two-man to a three-man. You need to pack a third sleeping pad. A whole set of clothes? Add ’em in. Oh, and don’t forget her food because Baby Girl will be pissed if you make her go hungry {and the entire wilderness area will hear about it}.

And did I mention diapers? Yeah, definitely don’t forget those.

When it was all said and done, our packs weighed significantly more than usual. For our single overnight in Sedona, Will carried roughly 40-50 pounds, while I carried 35 pounds {Liliana + the backpack}. But, when we started considering our multi-night trip in Ansel Adams Wilderness, we began questioning whether we could do it. After all, I was hiking on a busted knee with strict doc orders to not carry a lot of weight {oops.} Time to phone a friend!

If possible, gather your favorite outdoor friends and ask for help. It may seem daunting to ask friends to carry extra weight, but our experience was nothing but favorable. You’ll be surprised at how happy your friends are to help! We ended up with a group of 6 { 3 friends + our family} and each of our friends carried an additional 5-10 pounds for us. Could we have done it ourselves? Sure, but this was way easier.

You’ve heard it before, but starting your kiddo earlier on is going to make the entire process that much easier. Liliana turned 10 months last week so she isn’t exactly ancient, but we already notice that her outdoor experience has made things much simpler. Her first flight was at 8 weeks {and she’s racked up 20 more since then}; her first hike was at 10 weeks; her first backcountry hut trip at 5 months; and her first night in a tent was just shy of 7 months. 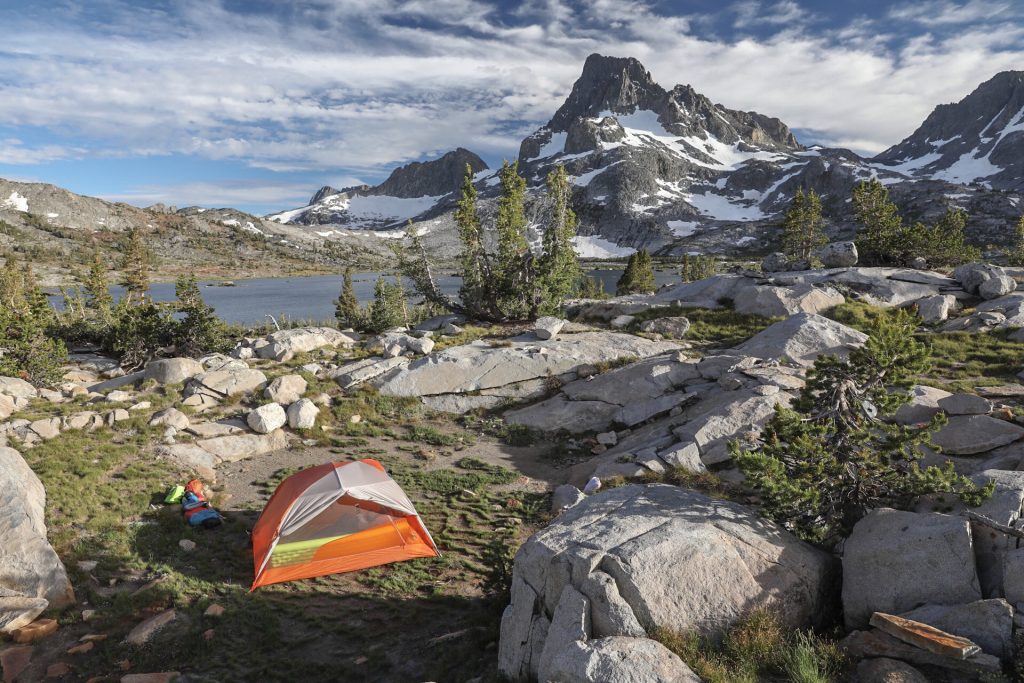 Our campsite at Thousand Island Lake

In showing her all of those new places and allowing her to adjust to new sleep situations, she has become the world’s easiest baby to take backpacking. She already knows how to go with the flow so what is one more day in a backpack or evening in a tent? Additionally, she views the outdoors as a comfortable place full of sensory experiences that make her happy rather than uncomfortable. Honestly, we reached one point where we were trying to find our campsite and we were doing a lot of back and forth hiking, so I sat down on a rock with her while Will and the others searched the lake. It wasn’t long–maybe 10 minutes?–but I watched Liliana sit in the dirt while playing with two rocks with nary a complaint. She was content, comfortable, and at peace.

That said, don’t discount you and your kiddo if you didn’t start early! If that’s the case, swallow your fear and do it anyway. You may have some bumps and bruises, but that’s life, right? Besides, once you get your kiddo out there, she will have that memory which will make subsequent trips so much easier. And if she cries? That’s the beauty of being in the middle of nowhere– you won’t disturb anyone!

To be fair, we’re not the best at practicing what we preach in this regard. Liliana’s first night in a tent was the first night of our three-month road trip!

However, we did start small with backpacking in that we tried a single overnight trip in Sedona to work out the kinks. It was a short trail–maybe 3 miles to our campsite–and it was relatively easy when compared to many trails we’ll see in the future. Plus, it was in Sedona where the weather is warm and easy and we didn’t need to worry about altitude or snow storms. We knew if things really blew up, Will could load her into the backpack, run down the trail, and be at the car within 30 minutes.

Starting small is helpful for two reasons. First of all, it gives you peace of mind. For me, I was a tad nervous heading into the wilderness the first night because I had a string of, “What if…?” running through my head. What if she got sick? What if she didn’t sleep? What if she got cold? In knowing that she was not that far from civilization, I was able to swallow my concern and focus on the fun.

Secondly, it allowed me to work out the kinks for myself. I had no idea what carrying a baby would feel like, and I wasn’t sure how I would fare. After all, Will carried her for all of our day hikes to save my knee. But again, in starting small, I knew I could gut check any discomfort long enough to get where we needed to go. 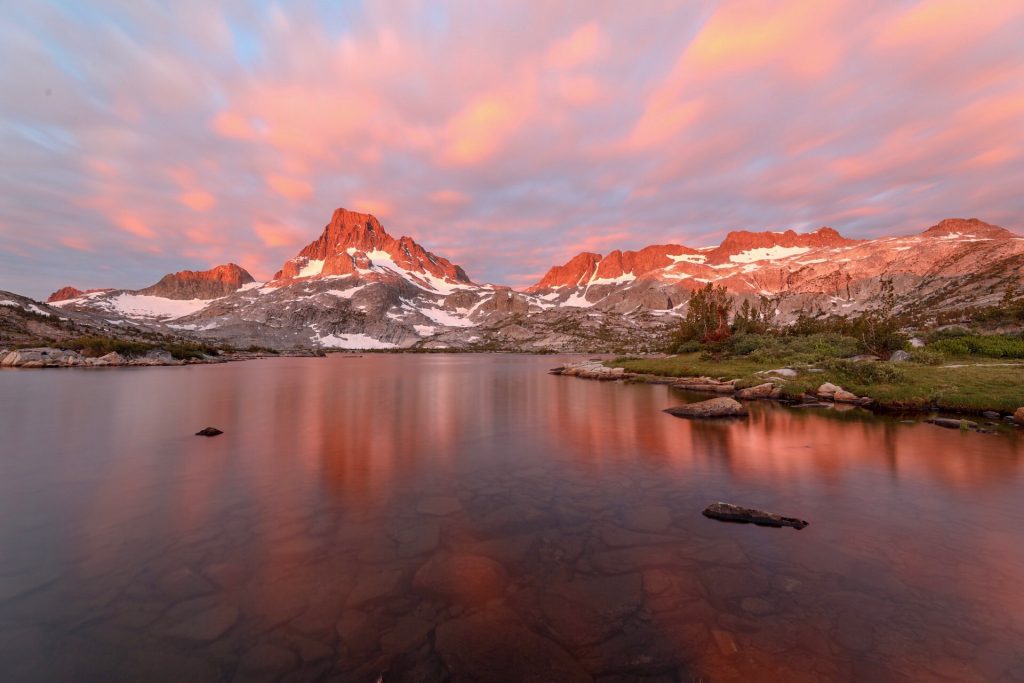 Roll with the Punches

I feel like this is Lesson #1 for parenting in general, but it certainly applies while backpacking!

All babies are different. Some sleep well and some don’t. Some walk out of the womb while others take well over a year. My point is this: you never know how your kiddos is going to react to backpacking, so it’s best to be prepared for anything.

Our first night in Sedona turned into a late one. We got to our campsite near dusk and I envisioned Liliana losing her mind with exhaustion since we had pushed it so far past her usual bedtime. But instead, we experienced the opposite: Girlfriend WAS LIT! The excitement of the day combined with the new surroundings wired her to a level that we’d never seen before or since. She giggled uncontrollably in the tent, rolling 360s on the sleeping pads while simultaneously chewing on the valves and marveling at the crinkling of the sleeping bag material. Our car camping tent was much bigger so she was overjoyed to realize she would be sharing a sleeping pad and sleeping bag with her papa.

These life discoveries went on for hours. It wasn’t until 10pm {for a kiddo that was falling asleep around 8pm at that point} that she literally fell over and passed out, almost as if she was narcoleptic. It was seriously the funniest thing we’d ever seen, but it was also a good lesson for us as parents. The two of us were gassed and so ready for bed, but that wasn’t an option until she decided to bless us with sleep.

For awhile, I stressed about how she would feel in the morning. I already knew the sunrise would wake her up early so when combined with a late bedtime, I dreaded the potential cranky baby we’d encounter at dawn. But then I realized that our little family was making beautiful memories. It didn’t matter if she wasn’t sleeping when I wanted her to; she could sleep on the hike out {which she totally did!} I readjusted my mindset and enjoyed the baby circus happening in the tent. After all, we would never get back our first night of family backpacking.

Thankfully, this is an easy one for me since I’m about as Type Z as one individual can be, but I realize that may not be easy for everyone. 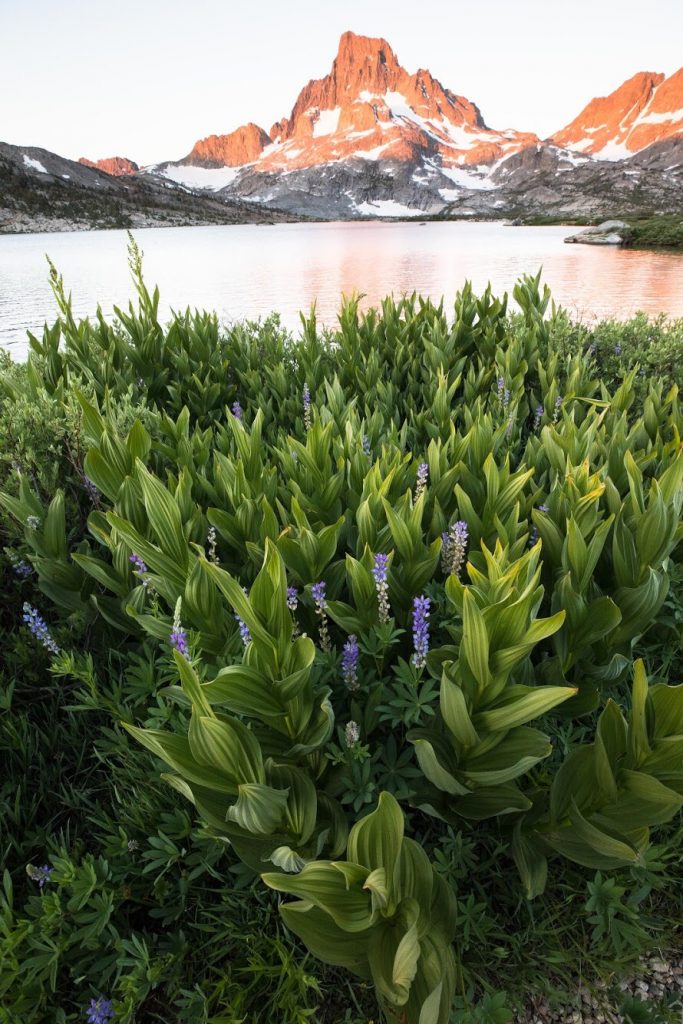 When you hit the trail with your babe, blow any preconceived notions away. Maybe you used to hike 10 mile days, no problem? Or you have a set camp routine that you’ve followed since your teenage years?

In our experience, backpacking with a baby doesn’t follow much of a routine. For example, Liliana tends to nap in her hiking backpack which means she may sleep well into the afternoon. There goes bedtime. She pinwheels in her sleep which is less-than-comfortable when she is mashed between two adults in the tent. There goes a restful night of sleep. She loves the backpack but after three days straight, she needed multiple breaks to stretch her own legs. There goes high-mileage days. Perhaps you like coffee in the morning? Baby girl wants a bottle first, so mama needs to wait.

My point is this: drop your expectations. The only reason any of those above points are problems is because of the expectation that went along with them. Once I learned to view every scenario as an unknown circumstance, it became a lot easier.

Backpacking with Liliana has honestly been of of the most cherished memories Will and I have from her first 10 months on this earth. Watching her learn to navigate tent life while educating herself on the natural world has been a spectacular experience. There is something special about nestling up in the tent together, hearing her little giggles echo throughout the mountains, that makes my heart explode. 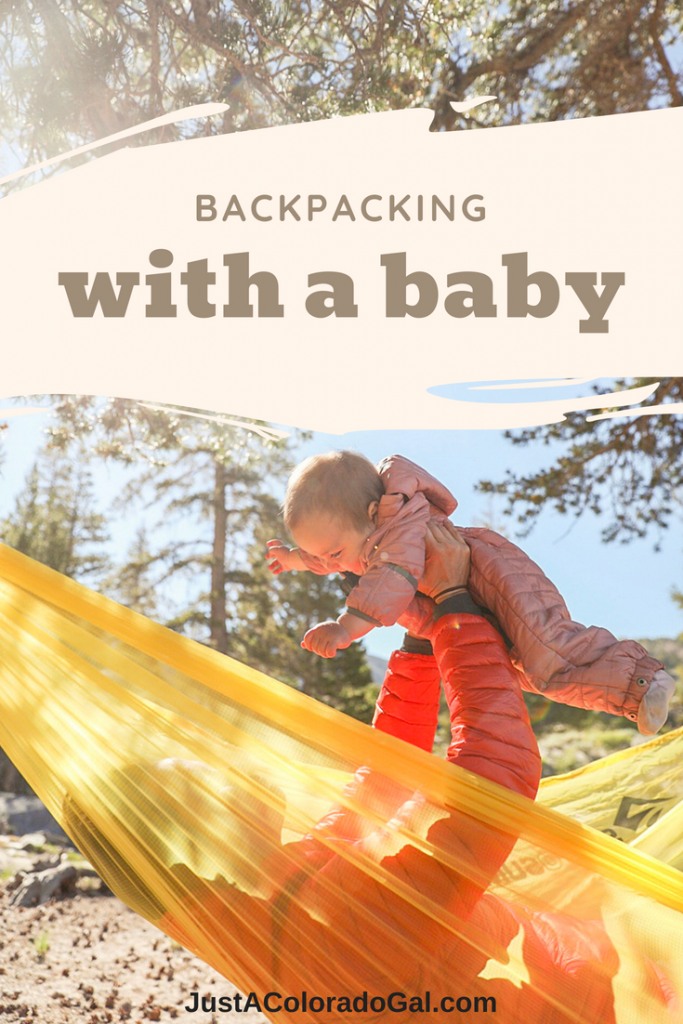 Is it tough sometimes? Of course. But I wouldn’t trade those memories and experiences for anything.

I realize there may be some specific questions about backpacking with a baby. Let me have ’em!

Come Join Us at the Getaway 5K!