My Balinese Adventures {AKA: When Monkeys Attack}

Back in April, I was feeling sprightly about getting all of my travel stories posted and sharing all of my adventures with you. I managed to get through the Jordanian adventures, but it occurred to me that I never included anything about Bali! What the what?! So, without {even} further adieu, here is my Bali story!

After my late-night cab ride to Amman, I caught a couple of hours of sleep, slammed some coffee, and found my way to the airport in Amman. I don’t mind traveling alone, but I was so exhausted that I was convinced I’d do something stupid! Fortunately, I kept my cool and managed my flights. I had a quick, two-hour flight from Amman to Dubai that went off without a hitch, and followed that up with a longer {8.5 hrs} flight to Jakarta. Columbia had purchased me United Arab Emirates tickets, and I’m pretty confident that they are the best airline in the world. Seriously. Such a nice plane, spectacular flight attendants and surprisingly tasty food. Waking up at sunrise as we landed in Jakarta was pretty amazing too! 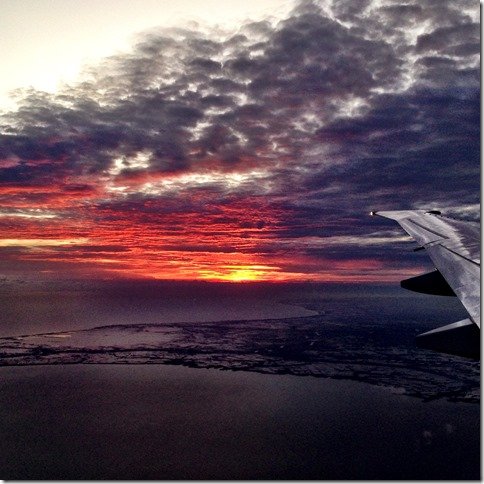 At this point, I had to hang out in the Jakarta airport for a few more hours until I could catch my last plane over to Bali. I was exhausted after 36 hours, three car rides, two flights and five hours of sleep, so I parked myself smack next to my gate and didn’t move. I was pretty sure I’d fall asleep and miss my flight if I sat anywhere else!

Eventually, wheels touched down in Denapasar, Bali, and I breathed a sigh of relief. We had made prior plans so I knew that both Will and a guard from our villa would be there to pick me up. Will had flown in an hour prior, so we had agreed that he would wait at the airport until I arrived. Walking around the corner to see his smiling face was the best moment ever!

Ketut, our main contact during our stay in Bali, was amazing and I learned a ton about him while he drove us around all week. You see, when you rent a villa in Bali, it comes with staff as well. We had cooks, security guards, drivers and even massage therapists. Y’all, it was glorious. And did I mention how stunning our villa was? 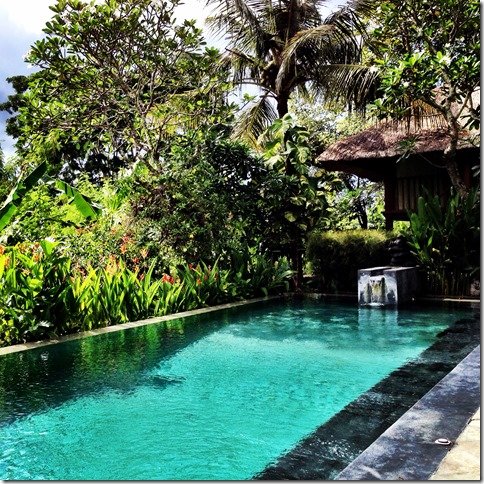 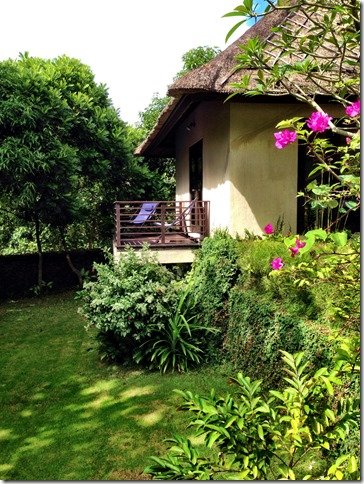 We had three villas between our group and the largest was the site of Cindy and Craig’s wedding. Since the wedding planner was taking care of everything, we all had the week free to explore!

We went to the beach, where I quickly learned the importance of a rash guard when boogie boarding…. 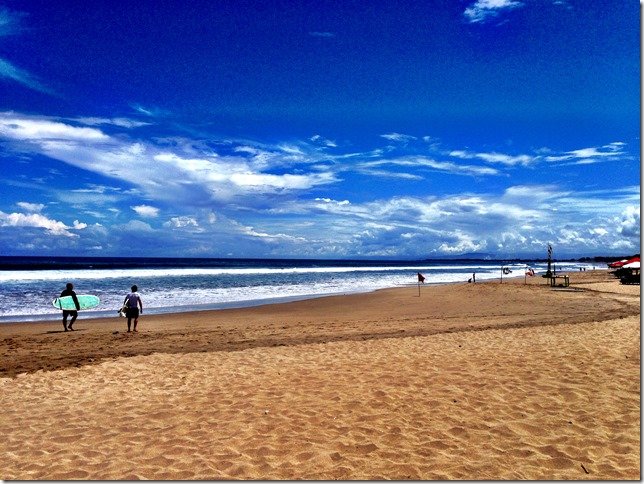 Spent the day hiking to a beautiful waterfall….. 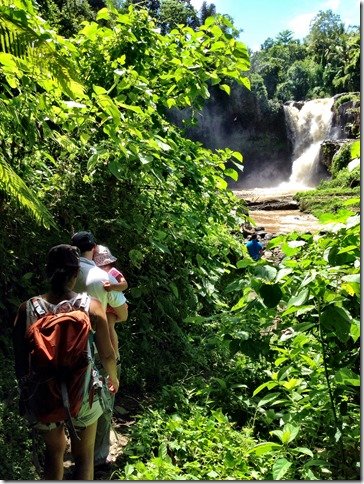 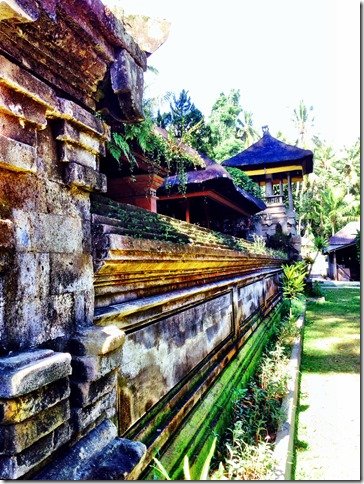 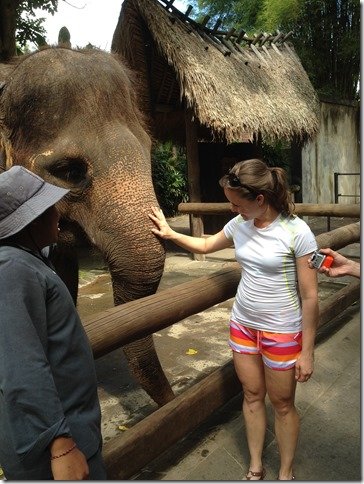 I also had one of the most bizarre experiences I’ve ever had with monkeys! We swung by the Monkey Forest in downtown Ubud one day, and initially, I was enthralled. The Monkey Forest is a small forest in town that has, quite literally, thousands of monkeys. That town has built up around it and the monkeys just kinda have the run of the place. We walked around for awhile, watching the monkeys and laughing at their behavior. 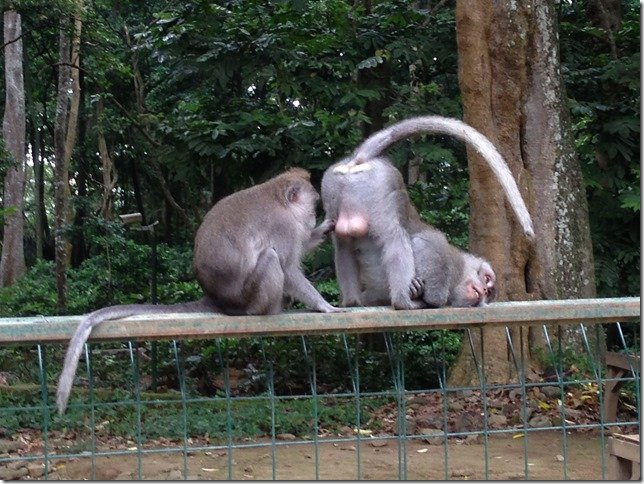 Don’t even ask; clearly, they wanted to put on a show for me!

However, after awhile, you could tell that the monkeys were growing agitated. They seem so friendly and outgoing and I suspect many tourists forget that they are, in fact, wild animals. At one point, a monkey aggressively jumped on Katie because her shiny bag {from shopping} caught his attention. At that point, Ketut explained that monkeys are pack animals. If we were to yell or become irritated with one of them, it could be dangerous because the whole clan may reliate in response. Since they seemed to be growing more aggressive, we all agreed that it was time to explore Ubud, and we left. However, our crew got split up and at one point, I was asked to run back to the Monkey Forest to grab a few remaining people. I ran back and was talking to one of our friends when I turned around to see a monkey standing at my feet. I kinda laughed it off….until the little beast lunged at me! 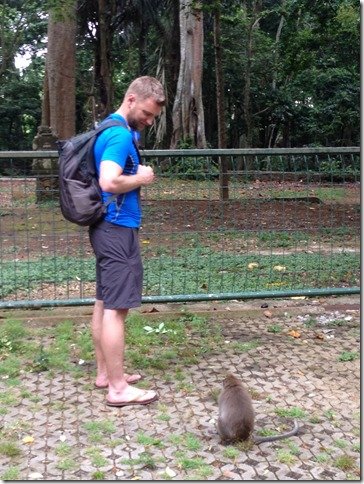 This monkey loved Will and followed him everywhere!

I jumped back and kinda laughed, thinking it was no big deal. But then, the monkey became more intense and full-on mauled me! He sat back on his haunches and launched up from the ground, attaching himself onto my shirt. He was gripping my clothes with both his feet and hands so I couldn’t pull him off, and even more intimidating, was baring his teeth in my face! I immediately freaked out because he was clearly pissed, but I remembered what Ketut had told us earlier: if I strongly reacted against this monkey, it was likely that his whole family would hop out of the trees and attack.

I stayed calm and kinda yelled for Ketut to come over and help me. I wasn’t sure what he would do, but I sure as hell needed some help! I remember trying to hold my face back and away from the monkey’s face; I wasn’t sure if they were big on biting, but I probably didn’t need a monkey bite on my nose!

Ketut quickly saw what was happening and ran over to help. Fortunately, his approach distracted the monkey and he jumped off me to investigate. I was shaken so I quickly got out of there, not wanting to trigger another monkey mauling. I found Will and the others and told them what happened; I was so glad Will hadn’t been present because who knows how he would have handled a monkey attacking his fiance!