Bryce Canyon: The Sleeper Park That Surprised Me 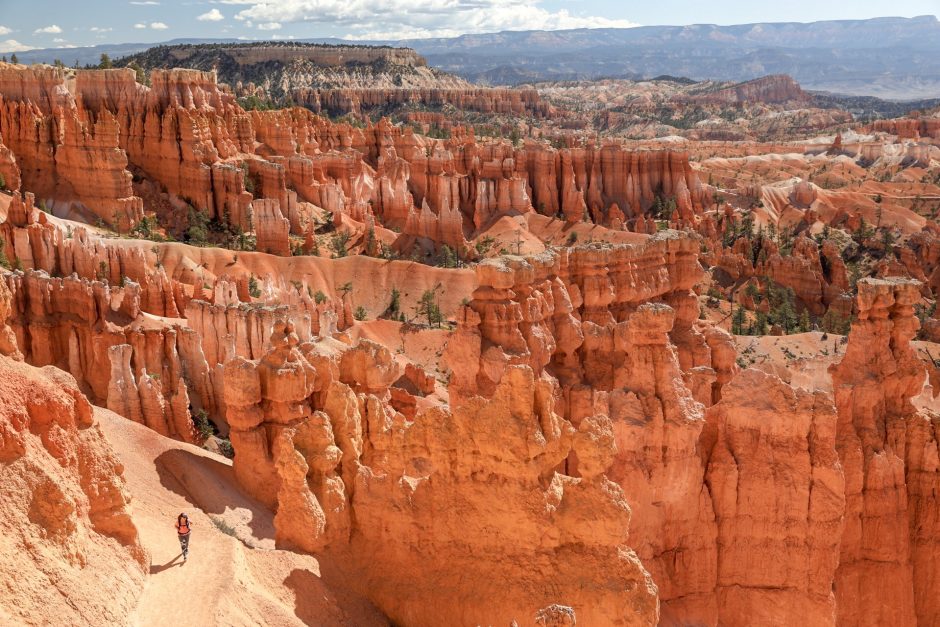 You know what one of my favorite feelings is? When you walk into something completely blind with zero expectations and it knocks you on your head with utter amazement. That’s how Bryce Canyon National Park was for me.

Truth be told, Bryce wasn’t on the list for either of us when we planned our initial road trip itinerary. Sure, I’ve heard stories of how beautiful the park is and even planned to run the Bryce Canyon 50K a few years back. But, that’s also representative of how I saw the park: worthy of a day of running but not for a multi-day camping trip for in-depth exploration. It’s small and certainly talked about less than it’s more popular cousins, Zion and Canyonlands National Parks.

But, things have a funny way of working out and Will and I can thank Liliana for discovering the beauty of Bryce. After leaving Capitol Reef National Park, we straight-lined it towards the now-shrunken Escalante with plans of tackling some easier slot canyons. We stopped in the visitor center to use their picnic tables for Liliana’s lunch and while there, Will popped in to speak to the park ranger. Tis a good thing, too, because the ranger squashed our plans: There aren’t any slot canyons wide enough to accommodate your child carrier, he told us. 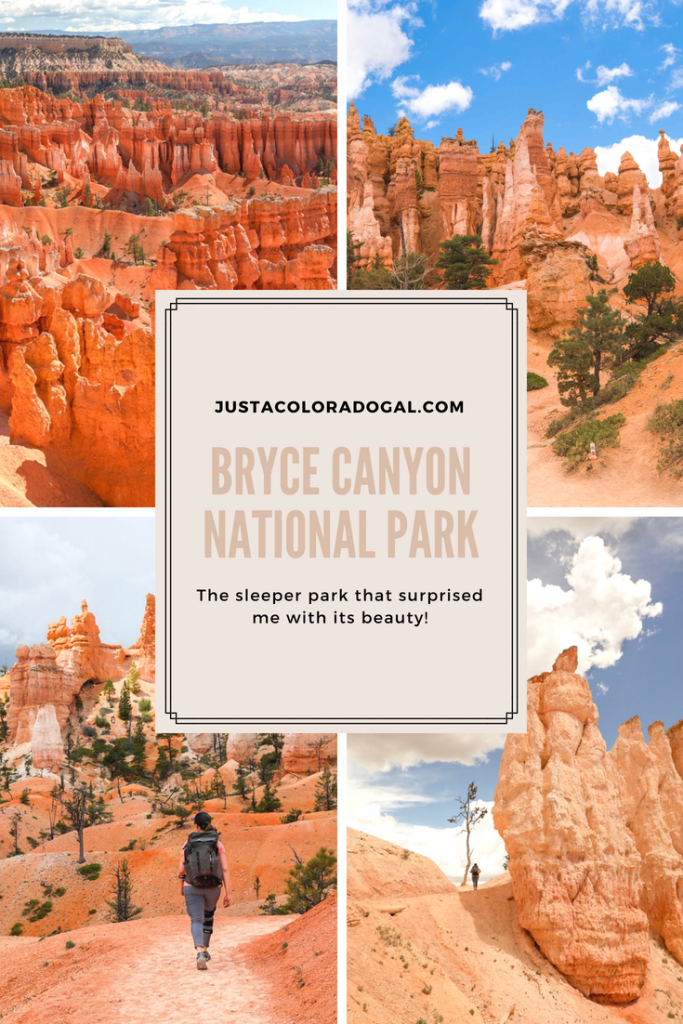 We needed a Plan B and if possible, we didn’t want to drive too far. We pulled out a map and visually inspected Utah, deciding which part of canyon country would likely be the most accommodating to a 7.5-month-old baby in an Osprey backpack {affiliate link!} We settled on Bryce. It was new to both of us with me previously vetoing the 50k race and Will passing over Bryce in favor of other parks with more long-distance backpacking trails.

And so it was decided: we were going to Bryce Canyon. 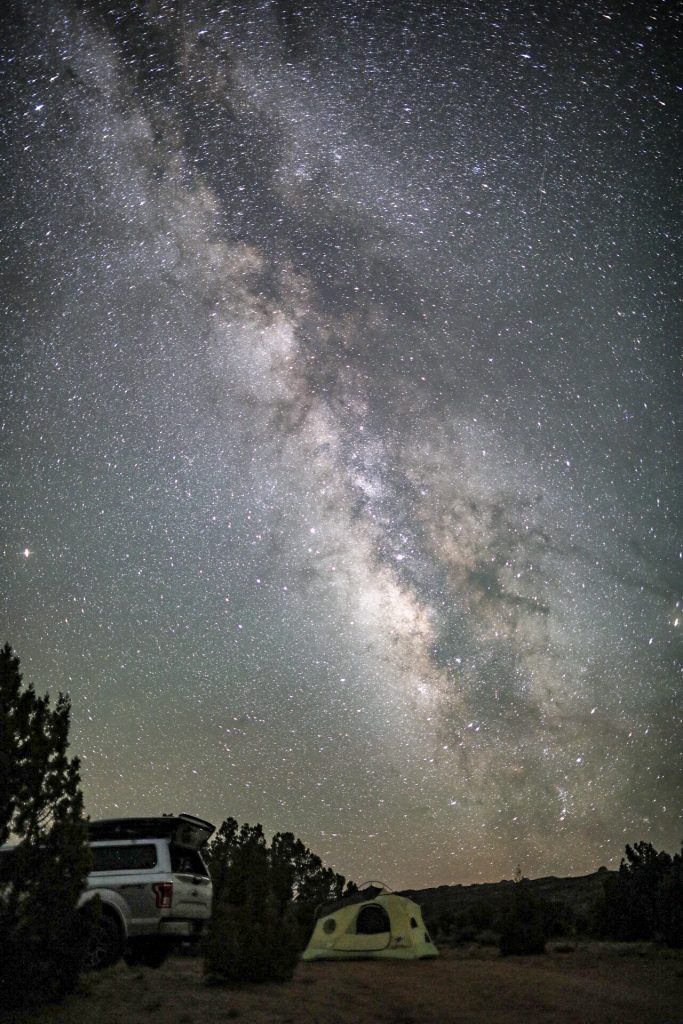 Camp in Escalante before heading to Bryce

Upon arrival, we immediately noticed the higher altitude. The rim of Bryce Canyon varies between 8000-9000 feet of elevation so while the lack of oxygen was nothing new to us, the cooler temps were! Escalante and Capitol Reef had been quite warm, causing us to throw the fly off our tent at night and lounge on the tailgate of our truck in flip-flops and trucker hats. Not so in Bryce.

We scooted into town and scanned our trusty map for a nearby national forest. Sure enough, we located the Dixie National Forest about 10 minutes west of the park, and pointed our F-150 in that general direction. True to form, we found a random dirt road, drove a ways down it, and found a solid dispersed campsite. No cost, no people…and no sunshine.

Hot damn, it was chilly outside! 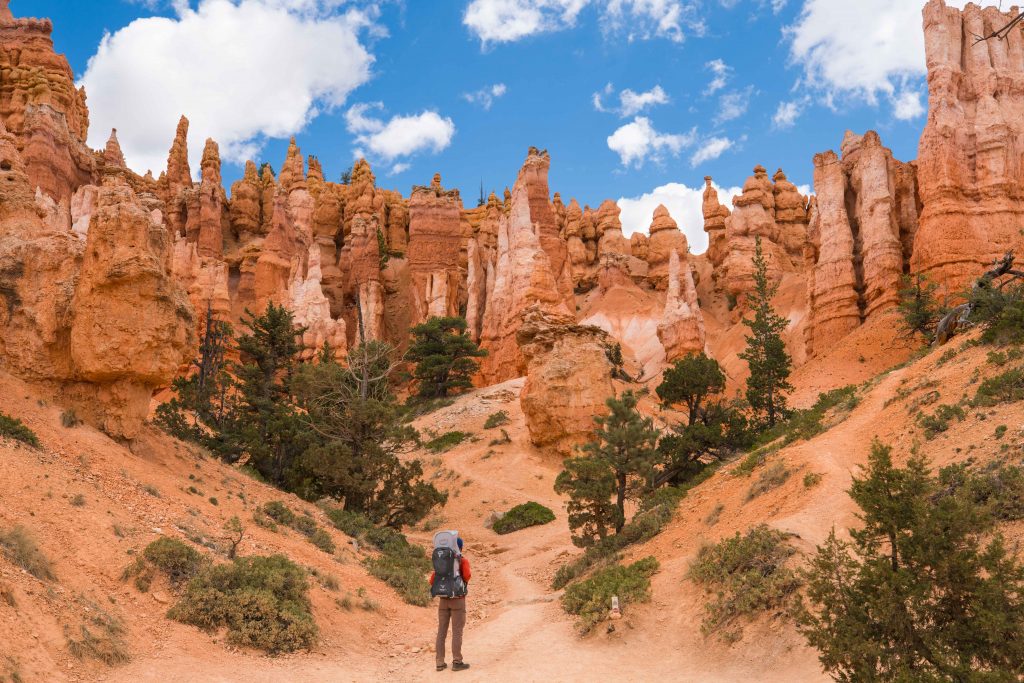 We pitched the tent while I shivered in my flip-flops and Liliana {thankfully} worked up a sweat in her bouncer. Night fell quickly and we could tell temps were not going to be as comfortable as Utah’s desert had been the previous week. We checked the weather on our phones, and sure enough, lows were reporting to be in the mid-20s. Knowing that, we scratched Liliana’s independent sleeping plans and settled on co-sleeping. Turns out, girlfriend is quite the little space heater! She was warm, Will was warm….I froze.

I like to think it was from excitement but Liliana awoke with the birds, sounding the alarm for the new day. It wasn’t even 6am, but the timing was perfect. We opted to avoid a cold morning at camp by chucking everything into the truck and beelining it towards the park and the uber-popular Sunset Trailhead. We didn’t want to deal with the park shuttle with a baby, so we figured we’d handle our morning routine from the parking lot.

Yes, we’ve turned into true dirtbags. Our only redeeming trait is the absolutely adorable child that we carry with us.

We ate breakfast, brushed our teeth, and drank our coffee while watching the parking lot fill to capacity. Finally motivated to hit the trail, we popped the baby into her backpack and pointed our feet towards the most popular trail in the park: the Queens Garden-Navajo Loop Trail.

To be sure, the trail isn’t difficult. At 3 miles roundtrip with just over 600-feet of elevation gain, it was a great warmup for hiking on my busted knee. But the ease of the trail didn’t matter because the scenery was incredible! 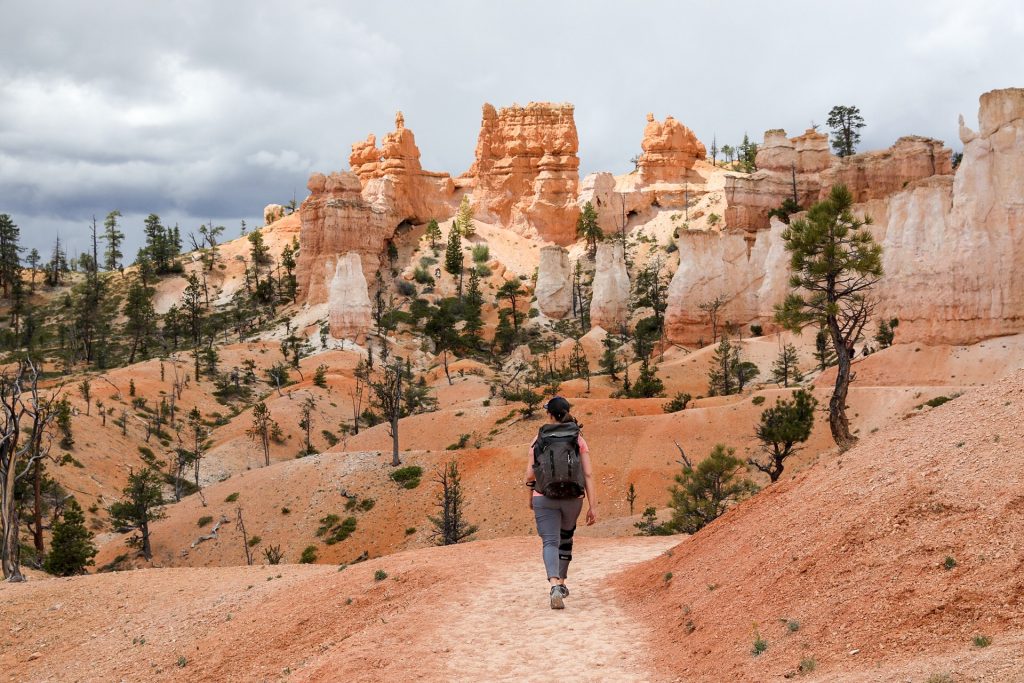 As we followed the switchbacks over the rim and into the canyon, I couldn’t contain my awe. In fact, I’m sure my mouth dropped over in amazement. Those colors! Hoodoos filled my line of sight, ranging in various hues of orange and red with some tipped off in a contrasting shade of chalk white. I wandered down the trail with my eyes constantly peeled in the air, admiring the beautiful rock figures. No joke; Will had to remind more than once that I had a torn knee and should likely watch where I was walking. But I couldn’t help it; the scenery was so stunning that I wanted to ensure I didn’t miss anything!

The popularity of this particular loop was evident and there were certainly more people than either of us prefer. But, everyone was polite and we got quite a few waves as we changed Liliana’s diaper on the side of the trail. And, the trail was just the ego builder I needed. Climbing out of the canyon made my patella sore, but certainly nothing unbearable. It was time to find another hike for the following day! 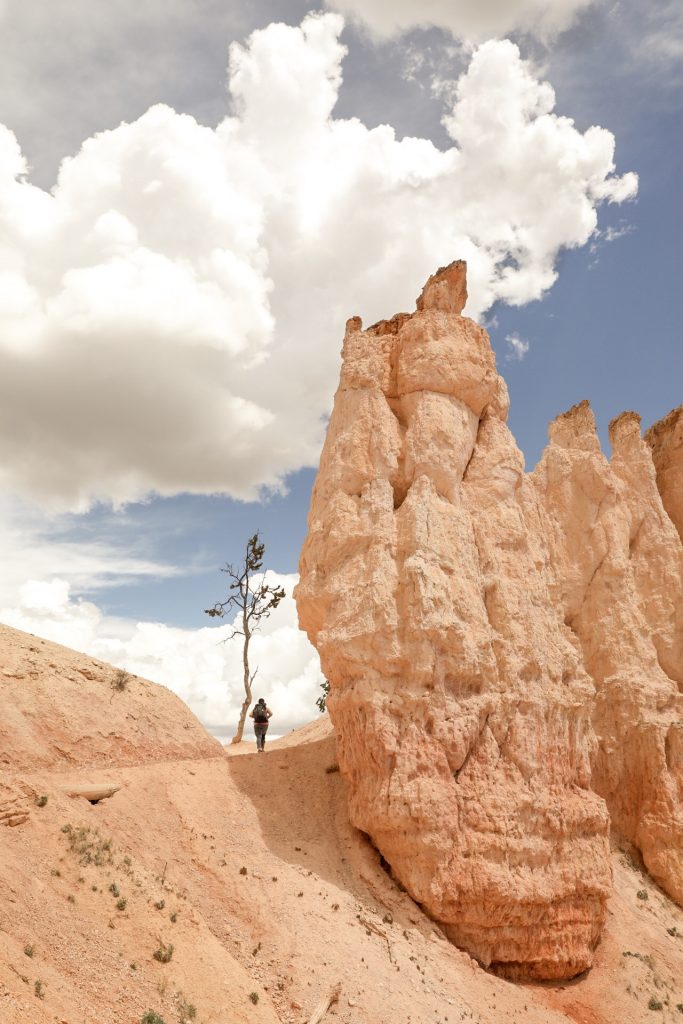 And so it went. We followed our initial day up with a second trail, hiking a portion of the Fairyland Loop down to Tower Bridge via the China Wall. Just like the day prior, I was wowed by the scenery. But unlike the day before, there were very few people on this trail leaving the three of us to wander and stare as we saw fit. We spent a lot of time shooting photos at the China Wall, mesmerized by the rock formations and the natural ombre of the colors. Will settled into a nook on the side of the trail and fed Liliana via a bottle while I explored a little bit. Truthfully, we likely would’ve dawdled longer if we hadn’t seen the dark storms clouds looming.

But that’s the thing with Bryce Canyon; it sucks you in and makes you want to spend hours upon hours exploring every crevice. Sure, the park is small {55 square miles versus 229-square miles of nearby Zion}, but it’s mighty. Those tiny corners are enchanting and definitely make for a worthwhile destination. And, if you’re like us, you’ll likely get pulled in by the magic of those hoodoos and stay longer than you planned.

Life on the Road

Leave No Trace in the Digital Era