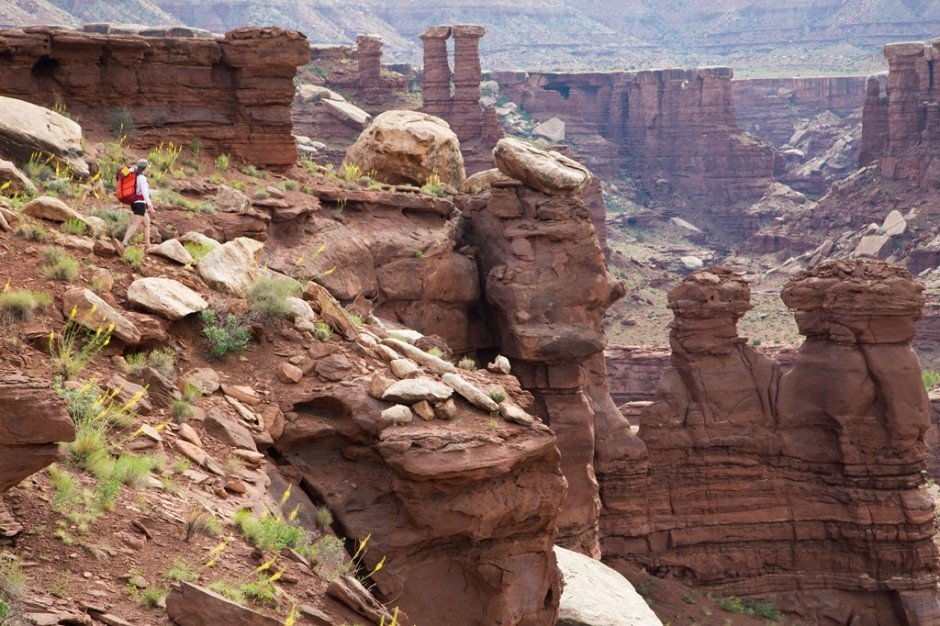 Per usual, all photos by my incredibly handsome fiance, Will Rochfort.

From the second we began planning a trip for the long Memorial Day Weekend, I was pushing for Canyonlands. I’ve heard that it’s a beautiful park and while it’s relatively close to Denver {6 hours}, I had yet to visit. I am also done with snow for the season, so I was beyond psyched when Will agreed to my backpacking decision. After rounding up a crew of 10 awesome friends, we were headed to Canyonlands! After spending the night in a Motel 6 in Green River, we ambled our way to the trailhead in the portion of the park known as Island in the Sky. Canyonlands is split into three sections—Island in the Sky, The Maze, and The Needles—and Island is definitely the least populated. In fact, both The Needles and The Maze were sold out of backcountry permits when we looked, so we really had no other options. 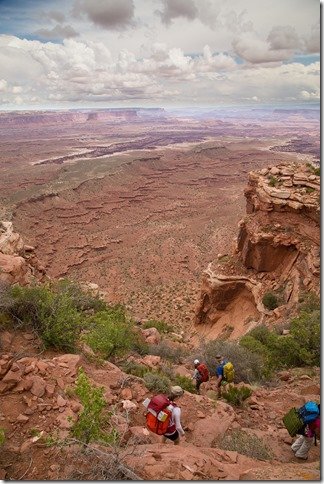 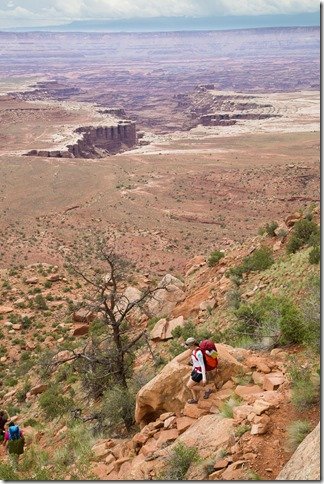 We easily found our trailhead, loaded up our packs, and began the precarious downward trek to the White Rim 4WD road. You see, our initial day of backpacking was split into two sections. First, we had a 1400 foot descent from the top of the Island down to the White Rim road. I knew this portion was a marked trail so I hadn’t been expecting much, but I was a bit surprised by how steep it was. We plummeted the 1400 feet over 1.4 miles, so the quads were feeling the burn. Occasional rock steps were built into the side of the canyon, but the exposure was very real and the views were absolutely outstanding! 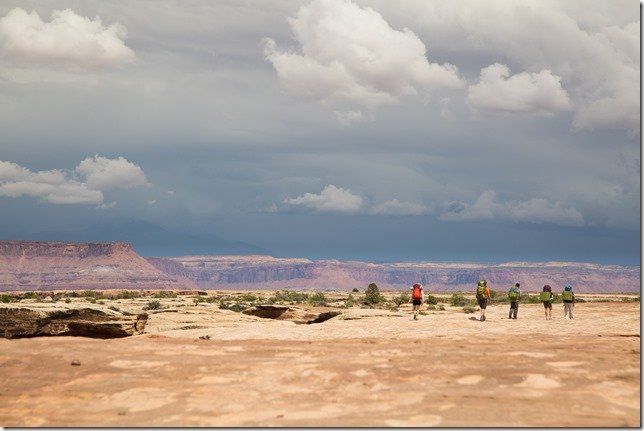 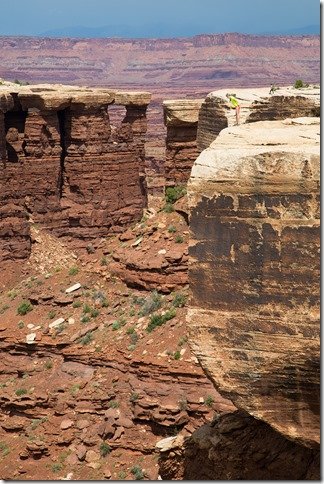 Heidi, taking in the view!

Upon reaching the 4WD road, we crossed the worn path and headed south-southeast along the flat rim of Gooseberry Canyon. This is where the second part of the day came in, and the route finding got tricky! The descent into Gooseberry wasn’t a marked trail and as we found out, there are merely a handful of cairns scattered throughout the canyon to help guide backpackers. Will and I were solely relying on the topo map to find the small break in the canyon rim where we knew we could descend. It took us quite awhile to locate this section of the rim, and I’ll own it: there was a hot second where I was semi-stressed because I knew eight other people were depending on us to find a way into the canyon. What if we couldn’t find this small section of the canyon rim?! 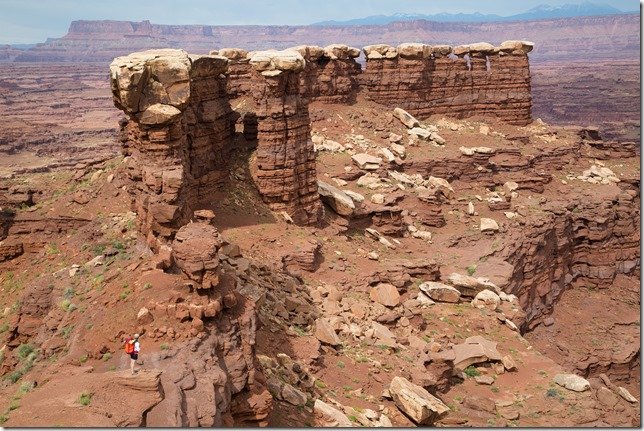 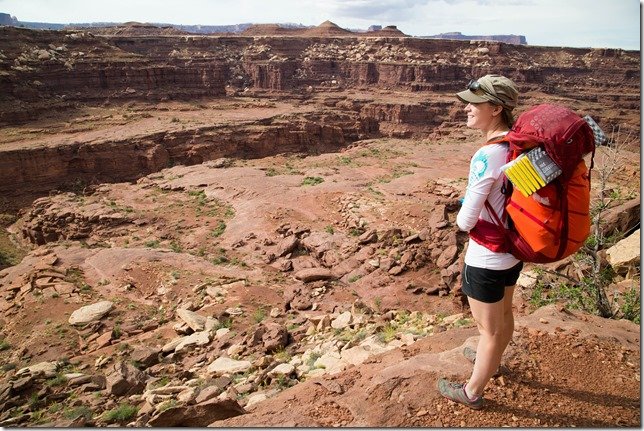 Fortunately, we finally found a way into Gooseberry but that didn’t mean the rest of the hike was easy! As I already mentioned, there was absolutely no route and traversing the side of the steep canyon was sporting at best. In the end, I seemed to have the eye for route finding, so Peter and I went first to mark out a semblance of a route with cairns. From there, we could shout up to the gang with minimal instructions so that everyone could safely reach the first Gooseberry plateau. 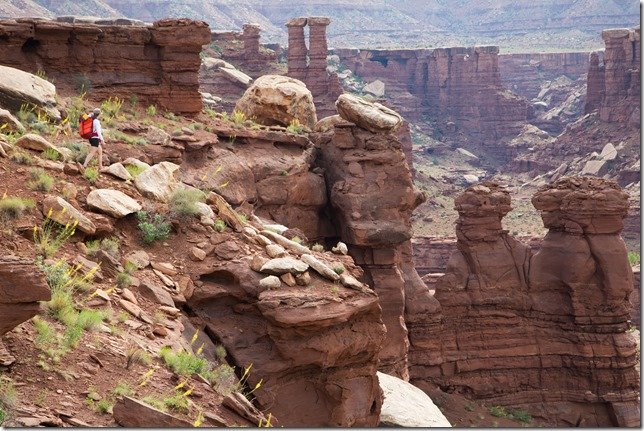 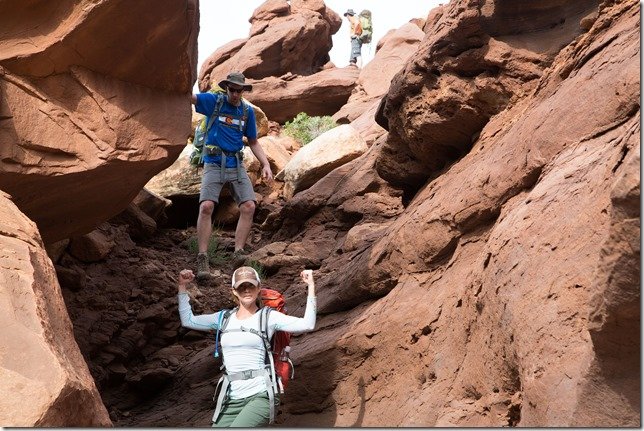 After safely navigating the first portion of the canyon, we decided to call it quits for the day and found the ultimate campsite. We perched our tents on the ledge of the canyon, affording us the best views in the world….seriously! 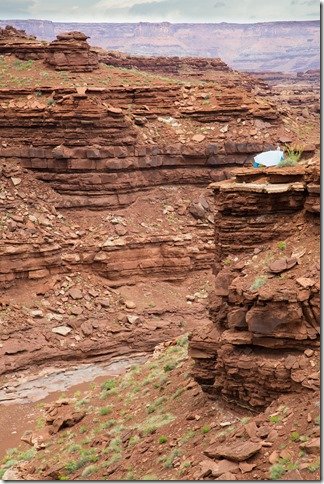 The following morning dawned dreary and rainy but the clouds eventually passed and the rain lifted long enough to allow us a four mile hike through Gooseberry. We had originally hoped to day hike down to the Colorado River, but alas, we still couldn’t find the route to descend to the base of the canyon! Regardless, we enjoyed traipsing around the rocks and taking in the scenery. The rain continued to hold off, so we all decided to hike back up to the top of Gooseberry and spend our final night on the White Rim. This would eliminate the need to climb out of two canyons the following day, and I think everyone appreciated splitting the canyons up. 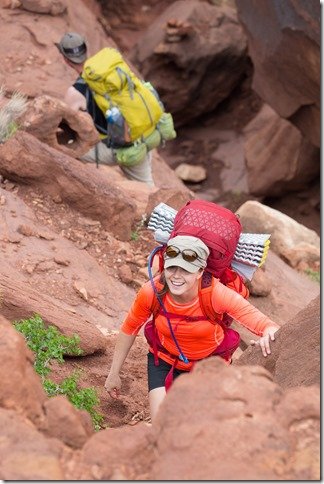 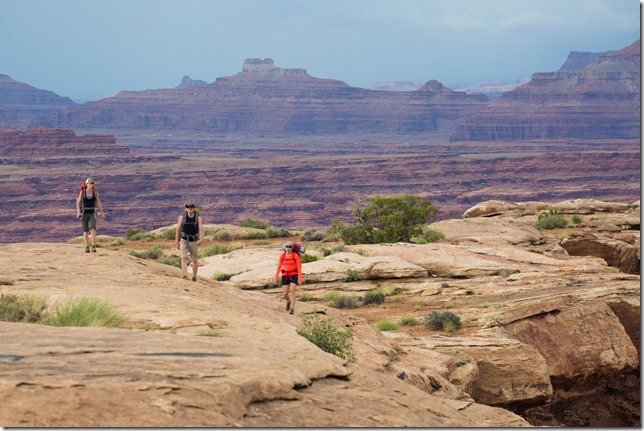 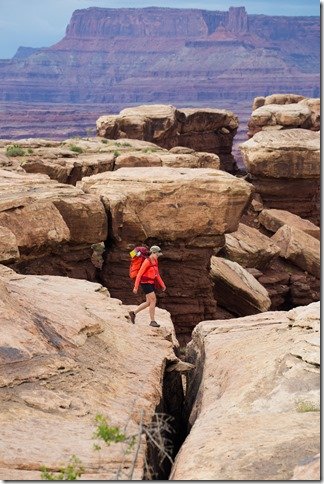 Naturally, the weather gods couldn’t be too kind to us! We all hiked up at our own paces, and Will and I were last to arrive, barely reaching the White Rim before a monumental thunderstorm rolled in. We had seen the lightning behind us during our hike, and we knew that it would be cutting it close. We set up our tent in record time, threw our gear inside, and zipped up the doors just as the rain came pouring from the sky!

It only lasted for 20-or-so minutes, but this was one angry storm! Wind blew the rain everywhere, including under our vestibule and into the tent. We watched through our tent windows as rivulets of water poured down the canals in the rocks surrounding our happy home. With such a violent storm, I knew that it wouldn’t last and sure enough, the moisture abated after a half hour. Once the gusts subsided, Angel and Will and I realized that we heard rushing water. Where in the world was that coming from?! We ran out of the tent in a semi-panic, worried that the flash flood had caused a river that could possibly take out our tent and knock us into the canyon. Fortunately, no such river existed, but we did find the source of the noise: the rain had formed a stream that was gushing off the side of the canyon, making a beautiful waterfall! 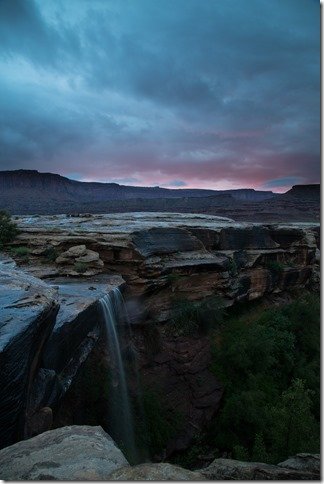 I yelled like a lunatic, alerting everyone else of the waterfall. After all, how cool is that?! Our last day began pre-dawn when Will, the eager photographer, woke before sunrise in order to snap some photos. I originally planned to sleep in and ignore the dawning of the new day, but then I realized I was being an idiot. I was already awake, so why not roll out of the tent with the fiance and take in the views? 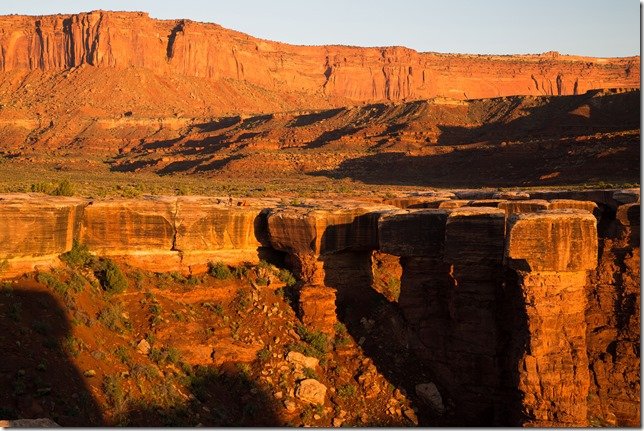 Kinda glad I did. 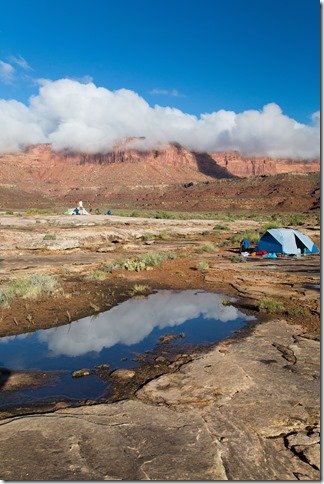 We eventually gathered our belongings before beginning our ascent back up to the top of the Island. After feeling the burn in our quads on the descent, I knew a 1400 foot/1.4 mile climb out would feel extra special! Fortunately, it wasn’t as bad as I imagined and per usual, the views were awesome. But you know what made it the best way to spend the holiday weekend? 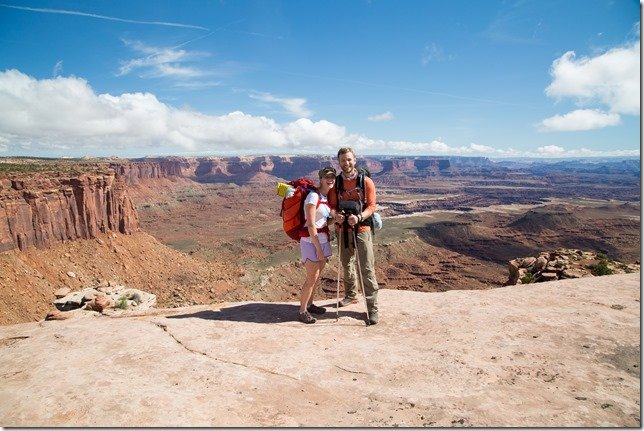 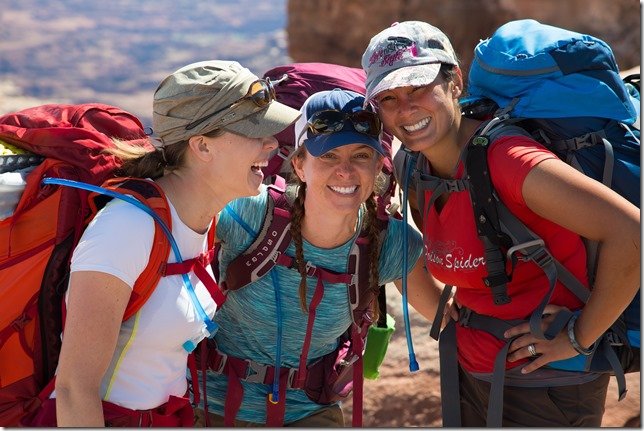 Have you ever been to Canyonlands?

How do you feel about backpacking in general? Love it, hate it, or never tried it?

Doing What You Love: Coach Kane is Heading to Regionals!