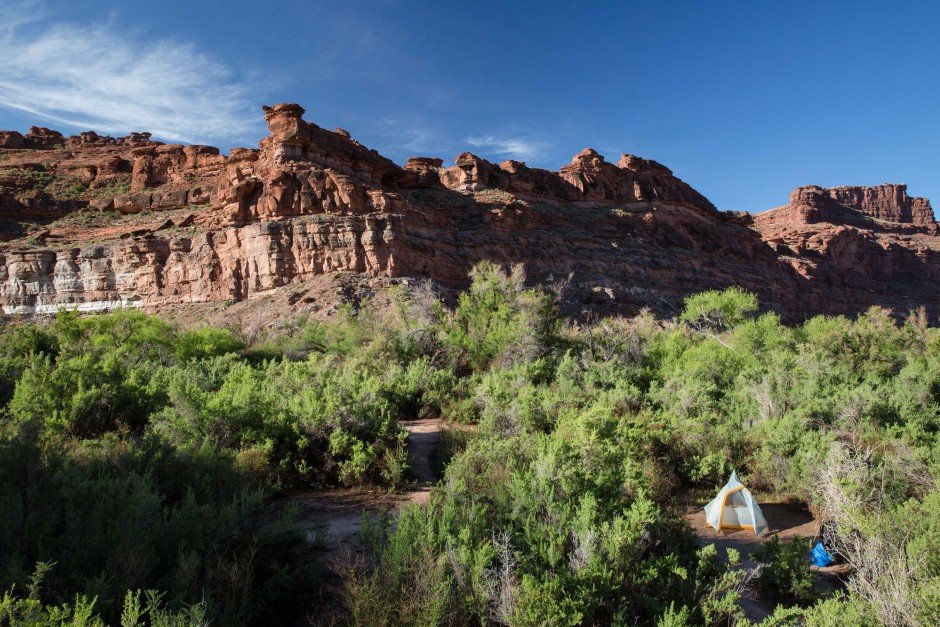 Memorial Day Weekend is a default adventure weekend in our household and this year was no different! We debated over our options for awhile but in the end, we chose to head back to Canyonlands National Park in Utah. Colorado was in the middle of a six-week-long rainy spell with gray skies and cold temperatures. Utah’s sand and sunny desert sounded about perfect!

Last year’s long weekend was spent backpacking in Island in the Sky, so we knew we wanted to shake it up in 2015. Will put in some sweat equity to figure out a masterpiece plan, and we came up with this grand adventure:

But of course, this didn’t happen. What is that famous expression? “The best laid plans of mice and men often go awry”? Yeah, that. A lot went awry and we found ourselves having to adjust to a new problem every few hours!

So here’s what happened….

We left Denver on Friday and reached Moab with zero problems and light traffic. Score! We tracked Kalen down at the parking lot of McDonalds and set about finding a place to sleep for the night. We knew that it would be sporting since it was Memorial Day Weekend and we didn’t have reservations, but it proved to be tougher than expected. Moab used to be a mecca for dirtbag camping but that’s definitely not the case anymore! In the end, we paid $20 to camp at an RV park who was using their playground as overflow tent sites. While Stew and I stayed behind and set up the tents, Andrew, Will and Kalen shuttled the car down to The Needles. They finally returned to RV-land around midnight where we all listened to drunk and loud campers shout through the night. 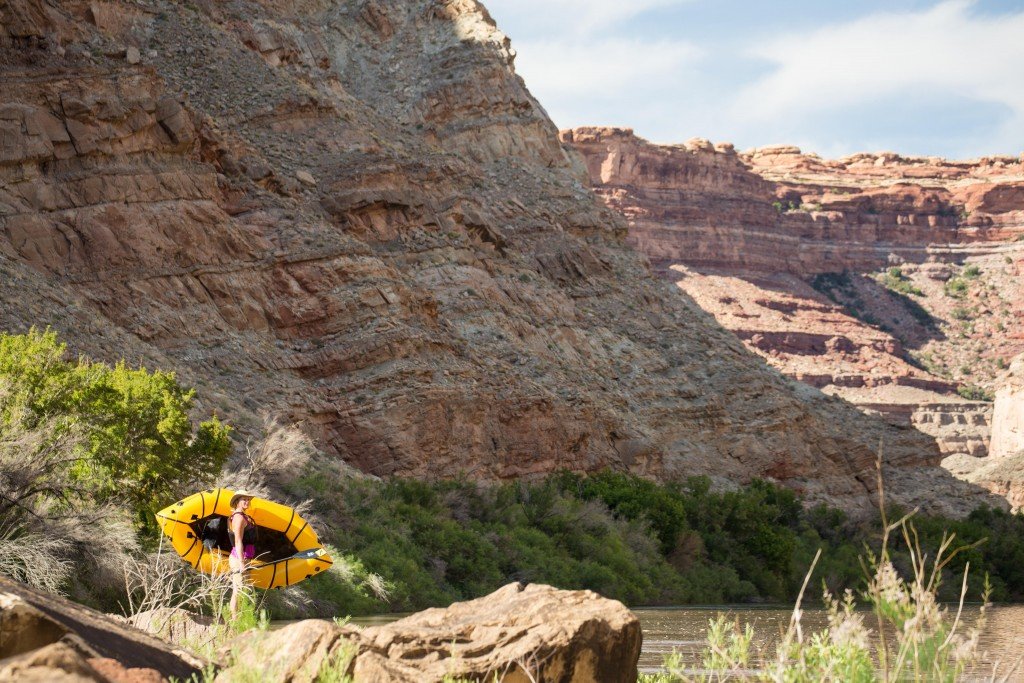 Needless to say, Saturday morning came early and I was quickly reminded why I avoid campgrounds like that!

We were psyched to get moving and greeted our shuttle driver warmly. After a longer-than-expected car ride, we finally arrived at the Lathrop Trail on the White Rim Road. Eager to stretch out legs, we all jumped out of the vehicle and began unloading our gear. I was bent over my backpack, trying to strap on the packraft, when I heard Andrew’s voice cut through the morning:

“Hey, did anyone grab my raft?” 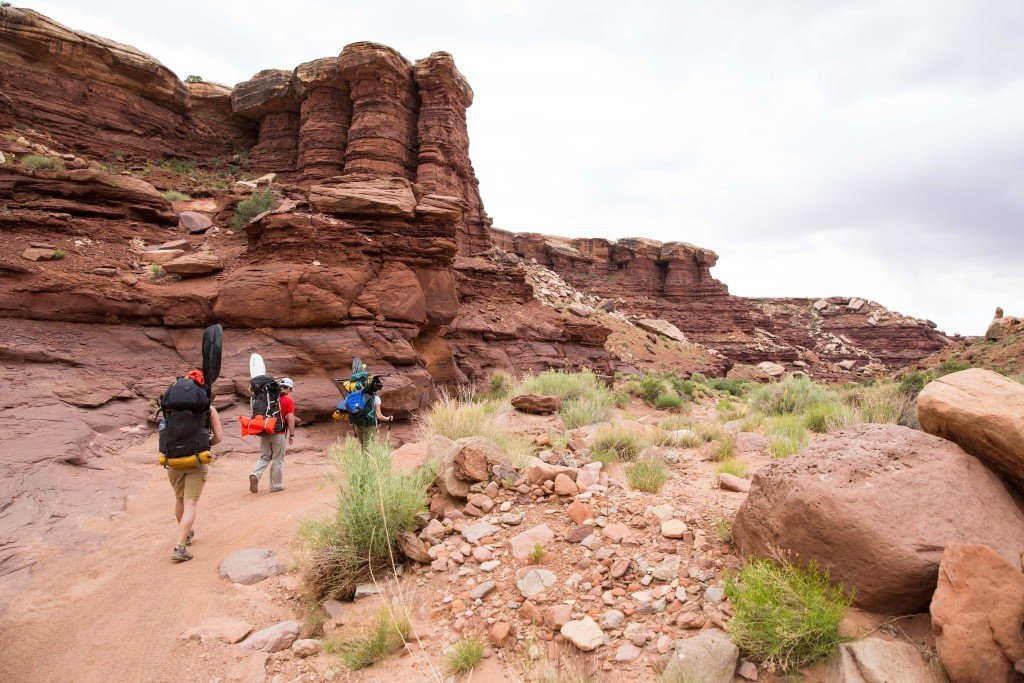 Turns out, Andrew assumed Kalen grabbed his raft {since she brought it to Utah} and she assumed he grabbed it since he was the one using it. The bottom line was this: we were 2.5 hours from Moab and we were one raft short. We could pay our driver to shuttle us back to town, grab the raft, and then pay him again to take us back to the trailhead, but he didn’t have the time in his schedule and neither did we. It was a game-time decision: we were going to have to make five people and four packrafts work!

{Bonus side story: as we were mulling over this turn of events on the side of the canyon rim, I hear a random voice call out, “Hey, is that Heather?” I look over at a passing group of mountain bikers and realize it’s Ann Driggers! Ann is another Colorado OmniTen who I never see because she lives on the Western side of the state. She managed to recognize me from my gear while peddaling by; what a small world!} 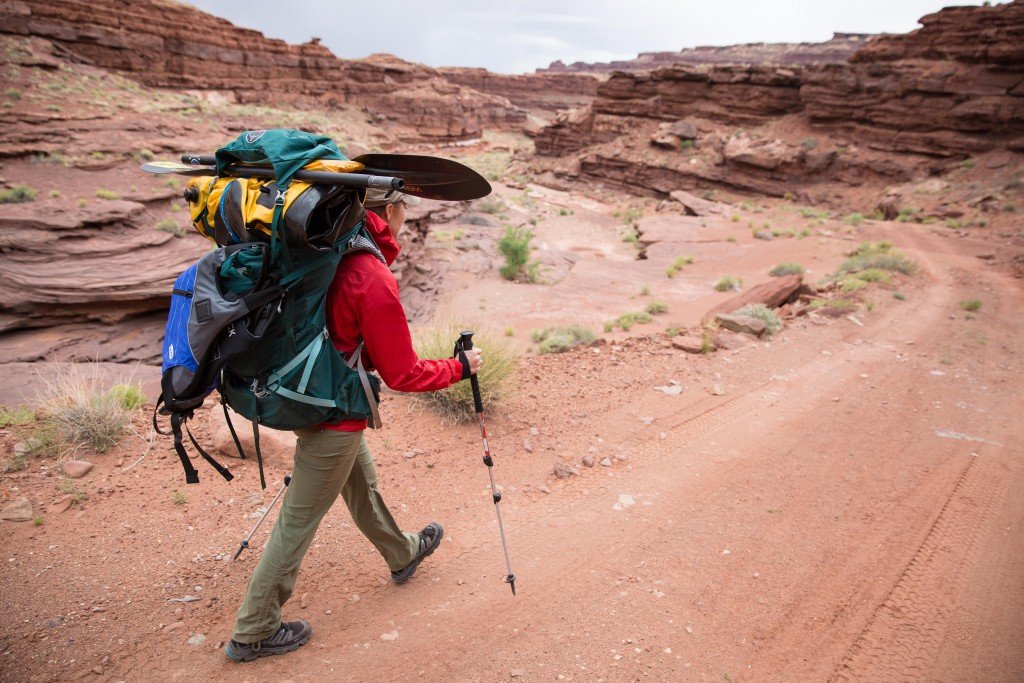 We finally accepted our one-raft deficit and loaded up our packs, complete with the packrafts that Kokopelli Raft had loaned us. We weren’t off to a great start but we were off!

The four mile hike to the Colorado River was mellow and easy. It was all downhill on a wide fire road so it gave me some time to adjust to the extra weight of the heavy pack. A few cold and drizzly storms crossed overhead as we hiked and we were covered in goosebumps for quite awhile. Fortunately, I kept running into more people to break up the monotony of hiking!

We were about a mile from the river when I glanced up to see two gentlemen hiking up the trail towards us. I immediately noticed that both of them were wearing Ultimate Direction gear from head-to-toe. Naturally, because I have zero filter and talk to everyone on the trail, I blurted out, “Hey! I love UD! The Jenny Vest is my fave and I wore it for my first ultra this past winter!” 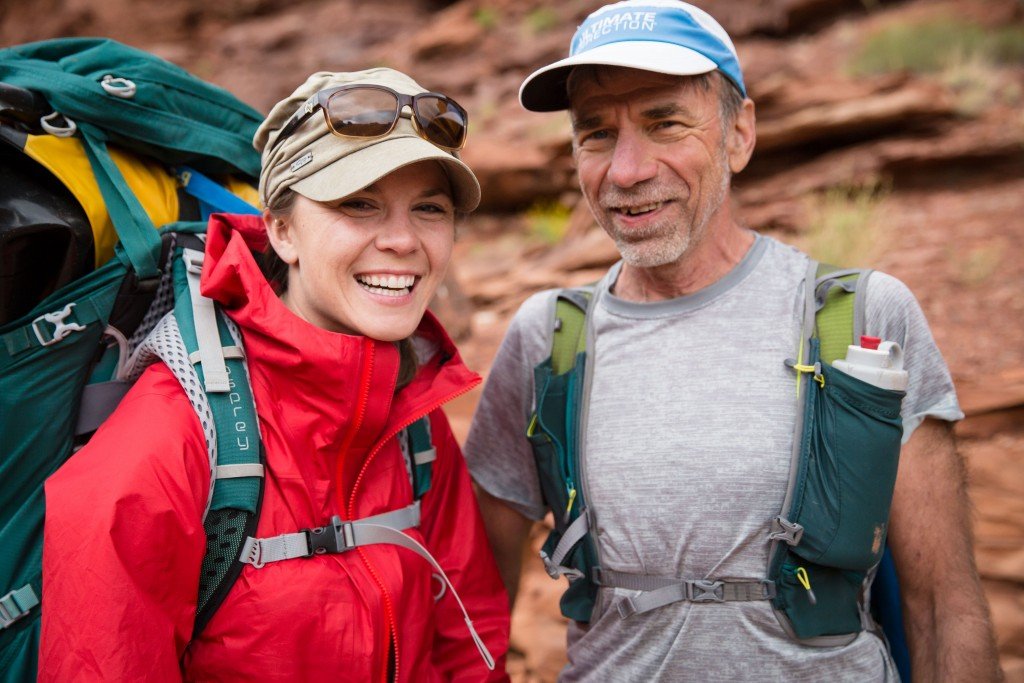 Buzz and me. It should be clear how badass he is since I’m wearing hiking pants and a hard shell while he sporting a mere t-shirt and shorts

Turns out I was yelling at Buzz Burrell and Peter Bakwin. Not only is Buzz the mastermind behind Ultimate Direction but he is also a trail running icon {seriously, give him a quick Google.} And his buddy Peter? No big deal; just another record-smashing trail runner who is the only guy to run the Hardrock 100 course….twice. Back to back. Uh huh.

We chatted for a bit and Buzz filled me in on their epic 100-mile journey that they were just finishing. Not only did they run all over Canyonlands, but they used sleeping pads as rafts rather than carry the weight of packrafts. These men are legit! 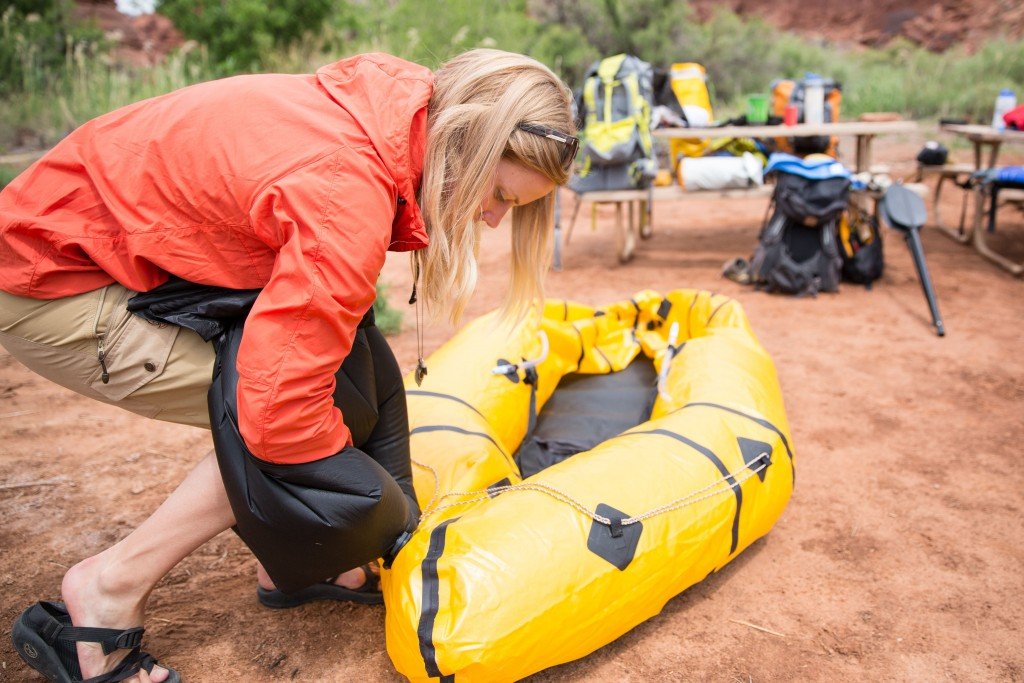 Anyway, we finally quit yapping and finally hit the Colorado River and finally inflated our packrafts. Of course, once the Kokopelli rafts were inflated, we had to figure out how to pack all of our gear! Typically each person straps their own gear on the front of their own boat, but we were in a unique situation. Both my raft and Will’s raft had spray skirts which meant a second person absolutely couldn’t fit. And as for Stew? Somehow he ended up in a fun-sized packraft that was probably better suited for someone my size. Needless to say, there was no room in his raft for extra gear OR people! This meant that Andrew jumped in the raft with Kalen while Will and I took on their extra gear.

After sorting the rafts out, the four boats finally put in on the Colorado!

We paddled for a few hours, soon realizing that the Colorado River was not running at 5 mph like the ranger had told Will. At best, it was floating in the 2-3 mph range. This was much faster than we experienced in Alaska, but was slower than planned. Will, Kalen and me were all paddling heavier boats than expected and we definitely weren’t moving fast enough to make it to Spanish Bottom by Saturday night. It was time to call an audible! 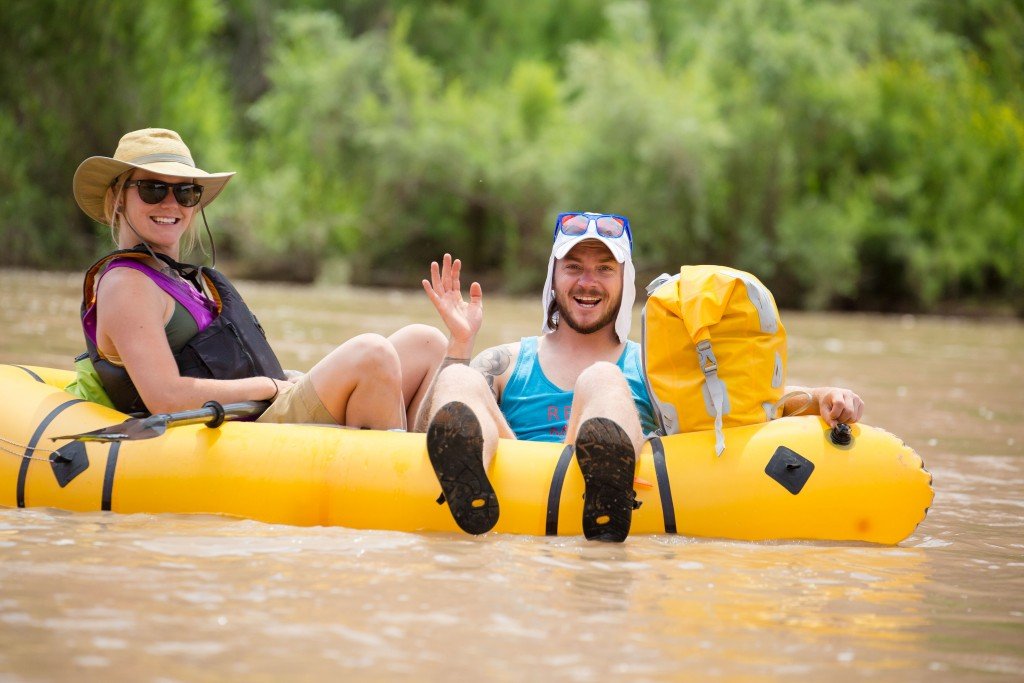 This happened for 25 miles. Andrew is lucky Kalen is such a beast with a paddle!

We convened over snacks and all agreed: we couldn’t cover 23 miles on Saturday. We ultimately decided to scrap the Green River and just stick to the Colorado. Rather than floating to Spanish Bottom and hiking back up through The Needles to float the Green, we would just spend Saturday and Sunday paddling to the confluence. Sure, this was nowhere near as ambitious as we had originally planned, but the scenery was beautiful and we were enjoying our time on the water. Why rush it? 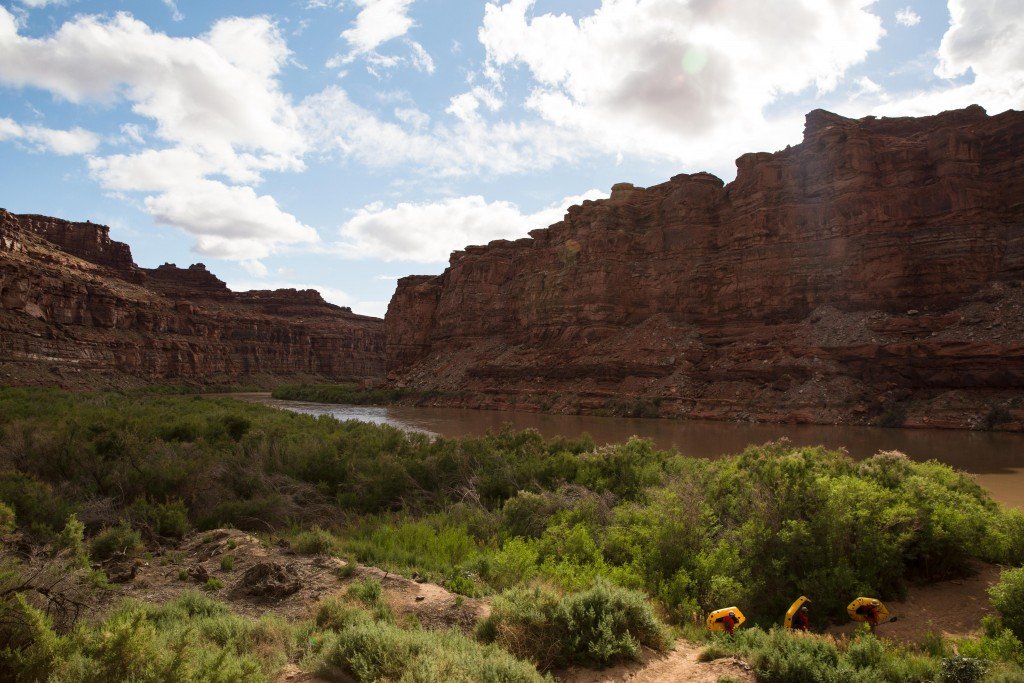 The best campsite on the river 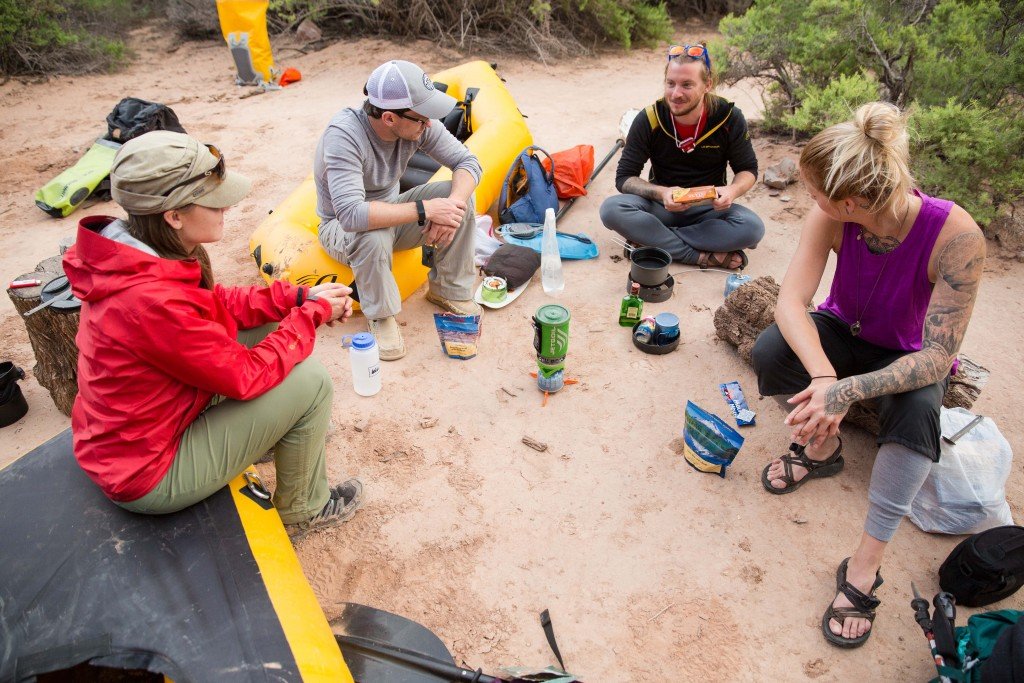 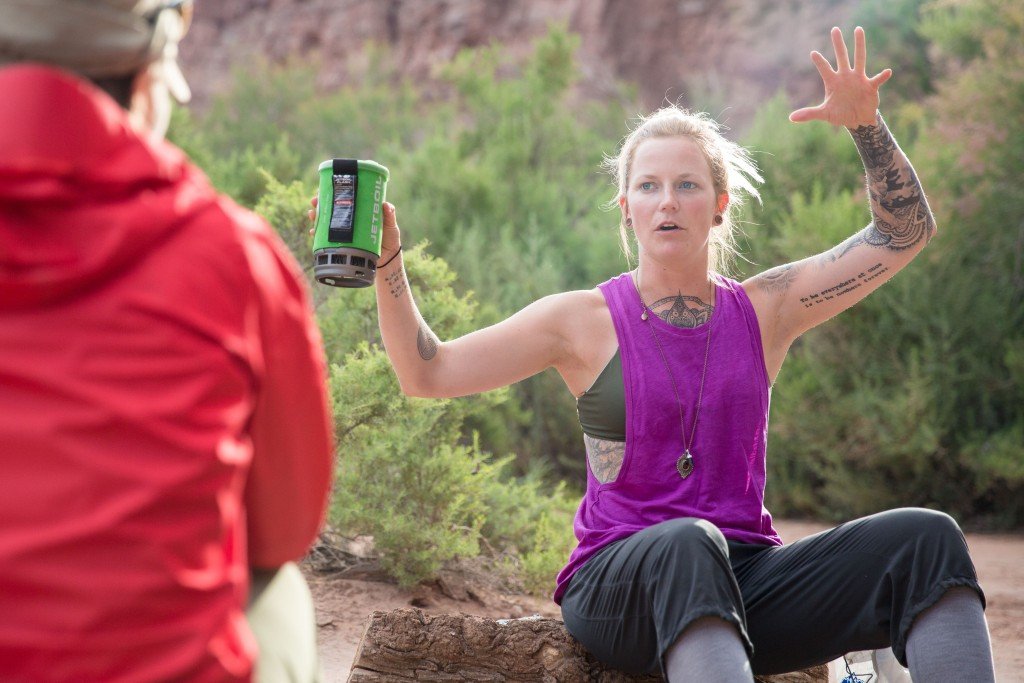 As you may guess, Kalen has some amazing stories!

Once we changed the plan, we were all able to enjoy the river. There was no pressure to paddle quickly {thank goodness!} and we were all able to soak in the views. We floated by a beautiful campsite at 5pm on Saturday night and rather than push on to “make time,” we opted to stop. Who knew if there would be another decent campsite within the hour and it would be a shame to waste this one. Besides, good food + good whiskey + good company is always the best way to spend an evening! 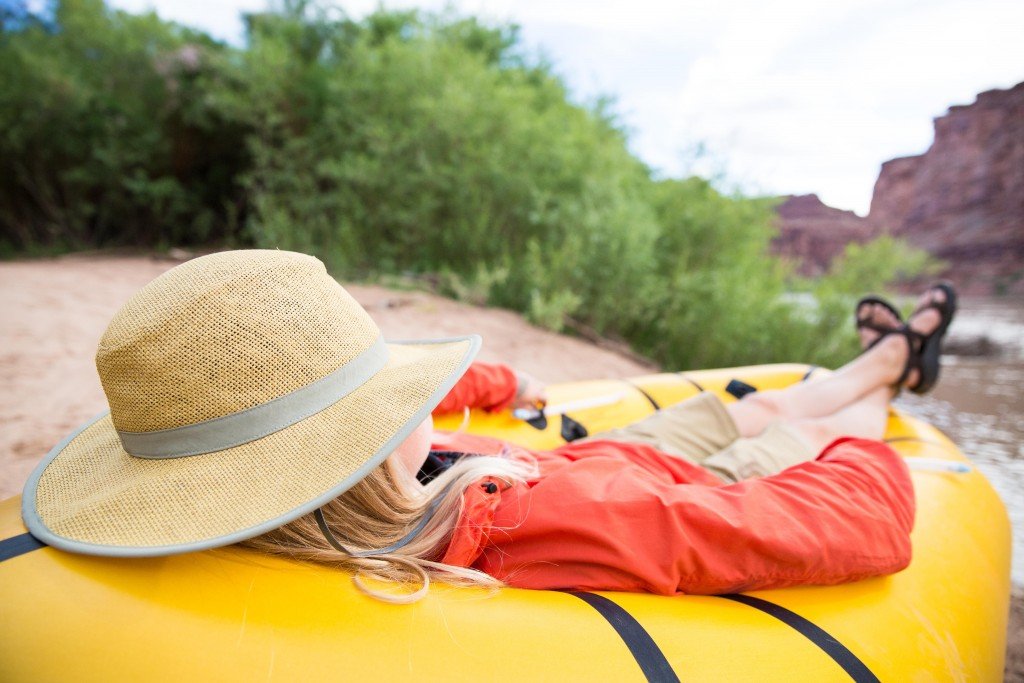 Our comedy of errors got even worse with part two of our Canyonlands adventure!