As I mentioned last week, I had the Georgetown to Idaho Spring half marathon this past Saturday and although I knew I was running, I was definitely just hoping for survival. My training had not been consistent, and while I had conquered a few of my long runs, I hadn’t done much else! (Seriously, I hopped from long run to long run without any maintenance runs in between…whoops!)

Having said that, I headed into Saturday morning with the plans of having fun and not wrecking my knee. Turns out, I was able to accomplish both!

Fortunately, Will was extra sweet and agreed to get up at the crack of dawn and drive Charlotte, Angel, and me up to the race start. This meant we didn’t have to deal with parking, so we could leave a lot later. He dropped us at the start line at 7:30, so the three of us had 30 minutes to use the bathrooms and track down some safety pins for our race bibs. No problem! 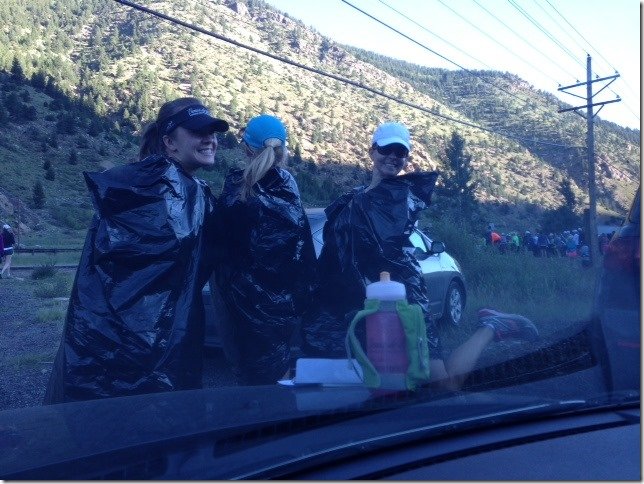 Hanging out pre-race in our trash bags

We eventually lined up at the start and after a few minutes of pre-race chit chat, the half marathon started. I wished Angel and Char good luck, knowing that they would smoke me and I wouldn’t see them till the finish. After that, I plugged in my iPod with an entertaining podcast, took a deep breath, and started my slow plod to the finish.

The race course circles Georgetown Lake for the first two miles before hopping onto the frontage road and starting the 1000 foot descent to the former mining town of Idaho Springs. The sun crept over the mountains just as I hit the 5k mark, and I immediately felt my fingers switch from frozen bits of ice to little balls of sweat. Graphic, no?!

I also took my first sip of water right around this point and realized I had made a stupid mistake! When I had filled up my handheld that morning, I had noticed that not all of my Cytomax had rinsed out from its prior use. I squirted some dish soap in there and let it soak while I finished getting dressed. Then, I rinsed it out a few times, filled it back up with Cytomax for the race day, and took it up to the mountains. Unfortunately for me, there was a ton of soap still inside my water bottle, and I immediately tasted bubbles when I gulped down my first mouthful. Gross! I didn’t want to dump it all out because I didn’t know what type of hydration stuff they had on the course, but by mile 6, I absolutely couldn’t handle the soapy taste anymore! I dumped everything out and stopped at all of the water stations for the second half of the course.

This was also the first race where I had cramping issues and that was super bizarre for me. It almost felt like I had a little gas bubble around my heart and honestly, it was pretty painful. It may have been from drinking soapy water, but I also think it was from lack of training. Once I hit miles 8-10, my body was suffering! I continued my slow trot with a small walking break at every mile, but I was definitely in a world of hurt. I also managed to tack on some serious extra mileage around miles 11-12. There was some traffic coming up the road, so we kept having to switch sides to stay out of the way. In the end, I clocked 13.3 miles instead of the usual 13.1, and I’m pretty sure this was why. 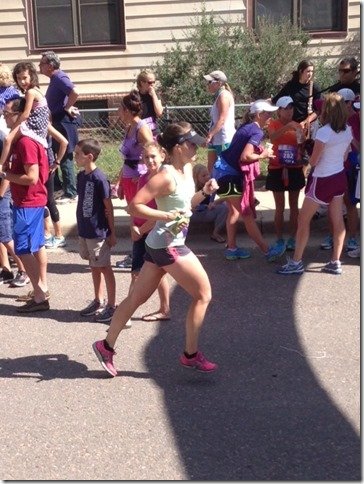 As I finally trekked my way into downtown Idaho Springs, I realized I still barely had the energy to finish up the race with speed. Usually, I can garner an extra burst of energy in front of the finish line crowd, but I was so tired that I struggled with even that. The only thing saving me was my insanely loud Rage Against the Machine blasting in my earbuds—in fact, it was so loud that I didn’t even hear Will, Angel and Char screaming my name!

In the end, my final time was 2:25-something for 13.3 miles. Yup, that’s almost the slowest half marathon I’ve ever run. Lovely! However, I’m not necessarily bummed or upset about my abysmal time. I mean, I totally deserve it since I didn’t put any effort towards training. In fact, I’m pleased with the fact that I managed to come in under 2.5 hours considering how little running I have done. Granted, the overall elevation chart from the course probably aided in me actually finishing!

More than anything, the GTIS half made me realize how unprepared I am for my Xterra trail half marathon at the end of September. It’s one thing to suffer through 13.1 miles downhill on a paved road, but it’s entirely another to tackle that same distance on singletrack with this elevation profile:

My knees were pretty sore immediately after the race, but the pain subsided within a few hours. My hips were pretty cranky with me yesterday, but everything seems to have smoothed out as of today. However, I’m seriously going to have an evaluation period this week because I am now on a mission—there is no way I can suffer through another race like I did this past weekend. Lesson learned!

Any tips for training for a trail half?

What You REALLY Need to Start Hiking