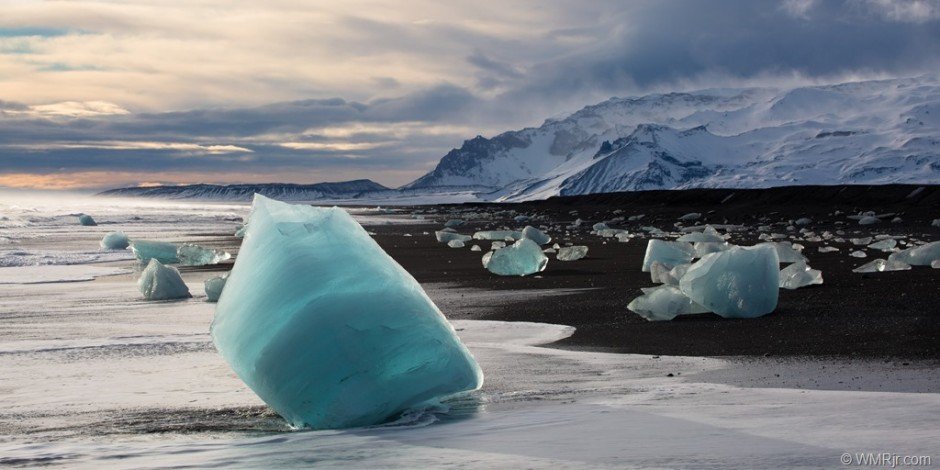 Guys, out of any country I have ever visited, I think Iceland may be the most beautiful….and Jokulsarlon Lagoon might be the single most spectacular sight I’ve ever witnessed.

We flew into Reykjavik late Thursday night and quickly picked up our rental car. We had heard horror stories about the cost of Iceland, but it hadn’t truly sunk in until the rental car lady told us that it cost $100 American to fill up our tank…and we were driving a tiny VW Golf! Ouch! Knowing that, we put the pedal to the floor and headed to the southeast side of the country.

You see, Iceland has a single road that runs around the perimeter of the entire country, and it’s known as the Ring Road. The interior, known as the Highlands, is completely uninhabited and the only type of travel allowed is via 4×4 vehicles with off-roading capabilities. Outside of Reykjavik, there aren’t any “large” cities in Iceland; instead, the Ring Road is filled with hours of open road interrupted with tiny, picturesque villages. 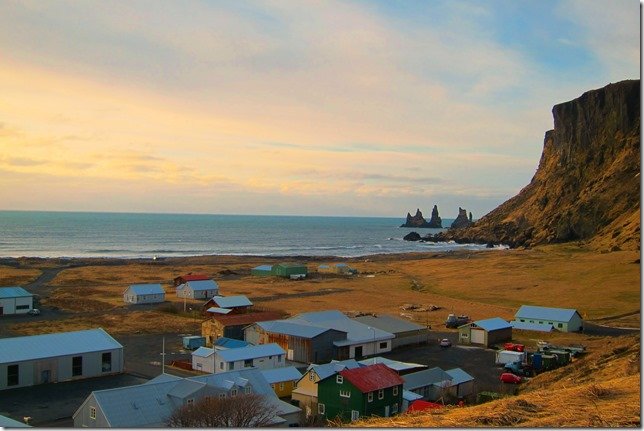 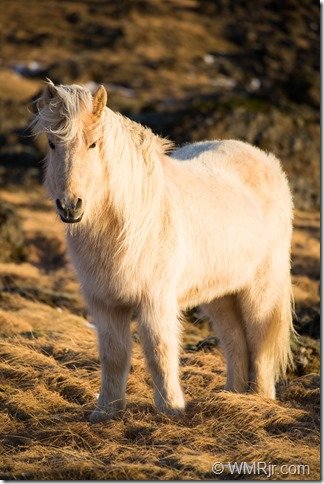 Since we only had three nights and two full days, Will had chosen to book us a hotel in a town called Kirkjubaejarklauster that was a quick hour from Vatnajokull National Park. If we only had two days to explore, you better believe we were going to spend it outside!

Friday was a bit gloomy so instead of hiking into the park, we decided to visit Jokulsarlon Lagoon. We had read that it was the site of various movies {it was featured in Die Another Day, Tomb Raider and Batman Begins}, and the photos looked spectacular, so I was beyond giddy to check it out.

Y’all, this place was absolutely.freaking.stunning! 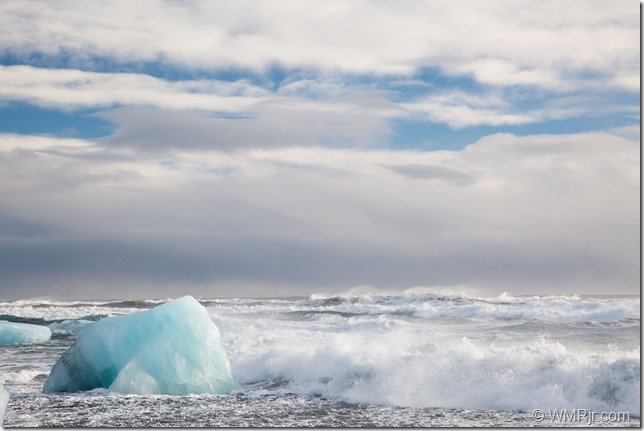 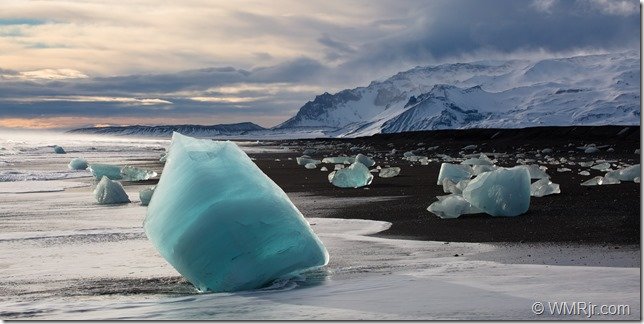 The Breidamerkurjokull glacier is gradually receding and as it does, bits of ice are breaking off into the Jokulsarlon Lagoon. The icebergs slowly float through an inlet before reaching the mouth of the ocean where the crashing waves eventually force the ‘bergs to shore. And did I mention that shore includes black sand beaches?! 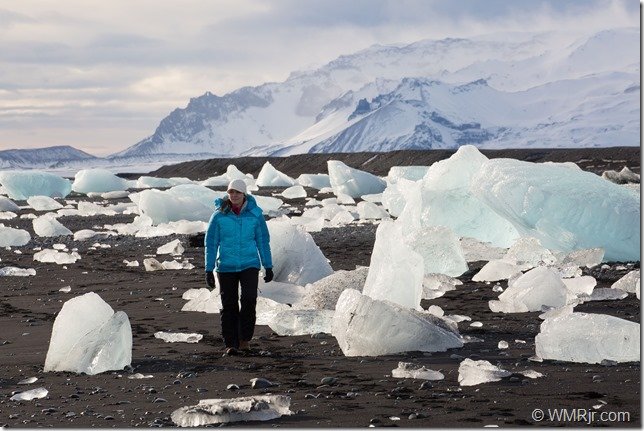 I’ve seen black sand beaches before, but I have never seen such dynamic color exist in nature! When the sun poked out from behind the clouds, the blue of the ice was breathtaking against the sand. When combined with the waves crashing behind the icebergs and the snow capped mountains in the distance, I literally couldn’t do anything other than stand and stare….and then snap 475 million photos! 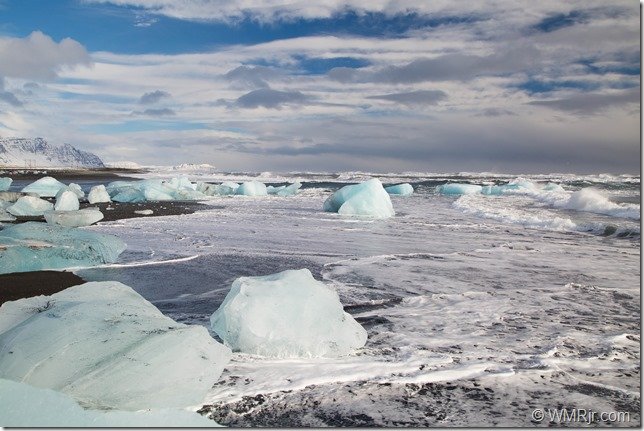 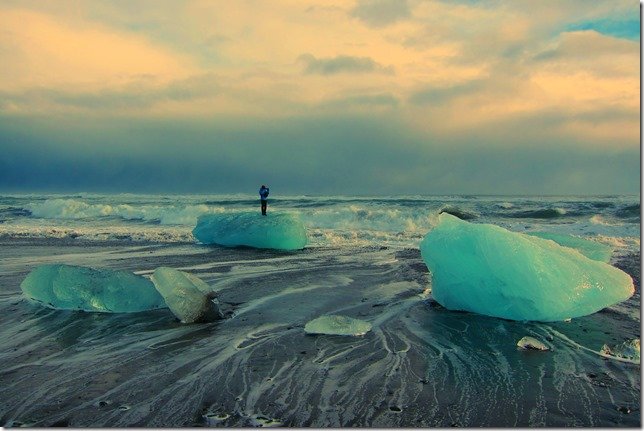 We spent a good 3-4 hours wandering around Jokulsarlon Lagoon, snapping photos and looking at the ice. It was so beautiful we didn’t want to leave! Occasionally, a tour bus would swing by and 20-ish people would get out to enjoy the view, but they typically hustled back inside the bus where it was warm and cozy. Iceland is fairly quiet in regards to tourism, but even more so in the winter…and those that do visit typically can’t handle the freezing wind that pummels the island! We were surprised when we realized that we were the only tourists who had rented a car and done the trip solo: everyone else we met was on an organized group tour.

We finally retired to the safety of our heated Golf and headed back towards town, only to spy a trailhead on the side of the road a few minutes later. We bundled up in all of our down layers and headed out to explore. After walking over the berm that divided the view from the road, we were greeted with another stunning vista! 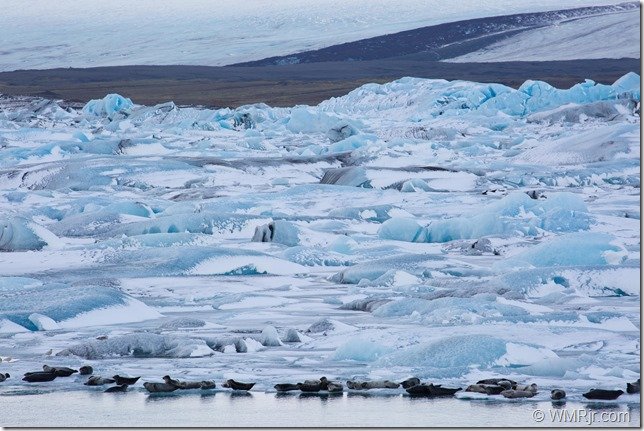 Is this real life?! 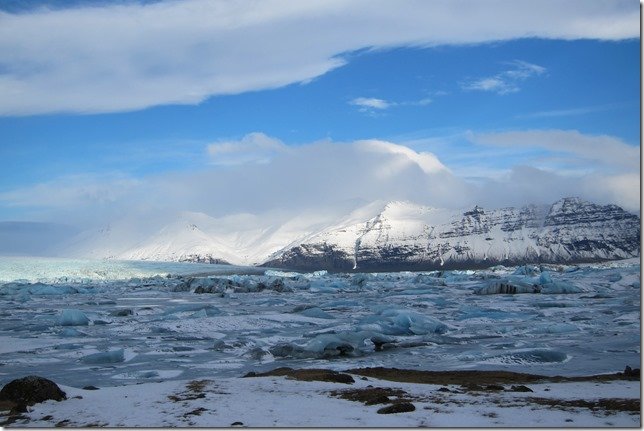 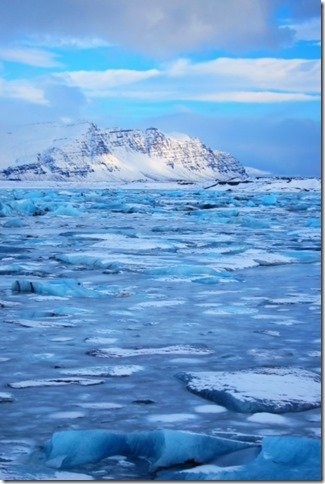 There was a semblance of a trail marked out in the snow, so we packed up the daypack and trekked out to see where snowy ribbon took us. Turns out, it merely skirted the ice, but it was still totally worth braving the cold. Our footprints were the only ones left in the snow, and the feeling of isolation was very real.

We’re headed into the Park next!

If you could go anywhere in the world, where would it be and why?