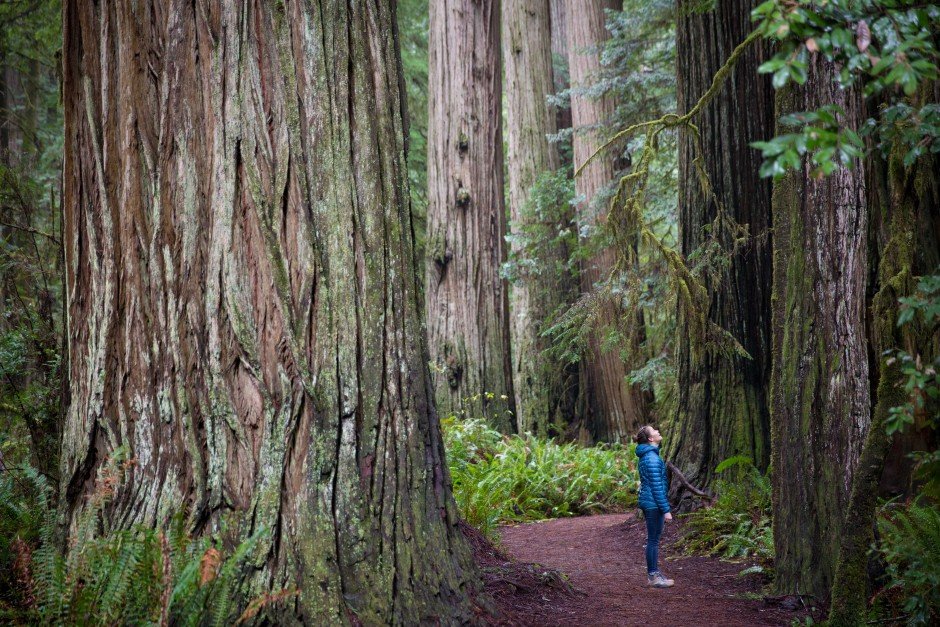 “The redwoods, once seen, leave a mark or create a vision that stays with you always. No one has ever successfully painted or photographed a redwood tree. The feeling they produce is not transferable. From them comes silence and awe. It’s not only their unbelievable stature, nor the color which seems to shift and vary under your eyes, no, they are not like any trees we know, they are ambassadors from another time.” ~John Steinbeck 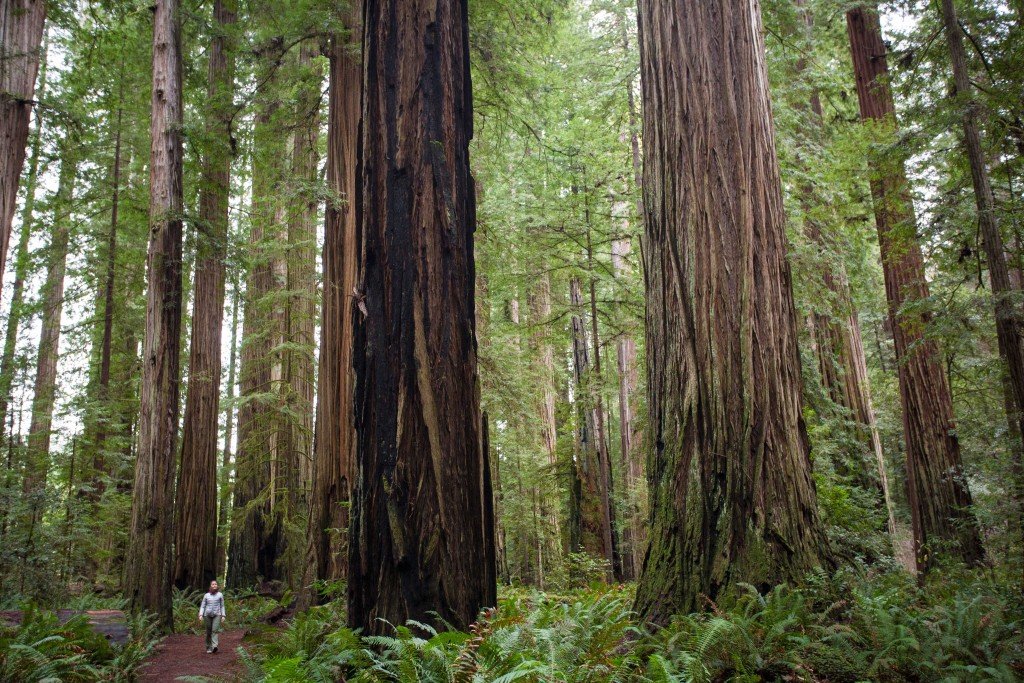 I first visited the redwoods as a child, gallivanting about the country with my parents on one of our many family road trips. To a nine-year-old, the grandeur of these behemoth trees was beyond impressive. Would I find them equally awe-inspiring as an adult?

As Will and I adventured into Northern California, he finally broke the surprise that we were headed to the redwoods. Of course, then the decisions came: where in the redwoods did we want to go? Redwood National Park itself was founded in 1968 when Congress protected the land adjacent to three existing Californian state parks: Del Norte Coast, Prairie Creek, and Jedediah Smith Redwoods state parks. In 1994, the National Park Service and the California Department of Parks and Recreation decided it was more beneficial to team up. Thus, the Redwood National and State Parks was born. 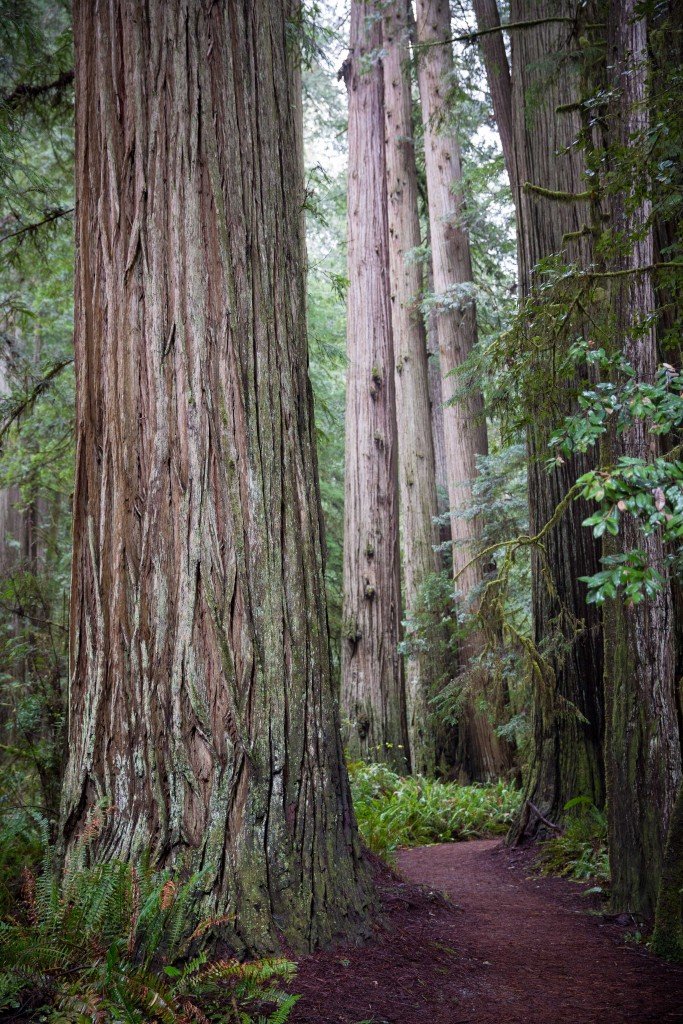 These days, each of the four sections of the national park retains its state park name. Based on some research, we decided to visit Jedediah Smith Redwoods, the northern-most park of the group. Because it is located near the Oregon border, it is the quietest and least-visited section of the Redwoods.  Since Will and I were headed to Oregon afterwards anyway, we thought it sounded like the perfect fit.

With only 18 miles of trails winding through the park, Jedediah Smith Redwoods is a different kind of hiking than I was used to back home. In fact, some people believe that Jedediah could be better enjoyed with a more elaborate trail structure since there is only a single trail {The Boy Scout Tree Trail} that ventures into the interior. The elevation gain was non-existent and there was never, ever a point where we reached an overlook or vista. Rather, the moist single track wove through dense forests of large trees and thick foliage with the occasional speck of sunlight breaking through the canopy. Drops of moisture hung on every possible surface, coating the entire park in a layer of dew. Toto, we’re not in Colorado anymore! 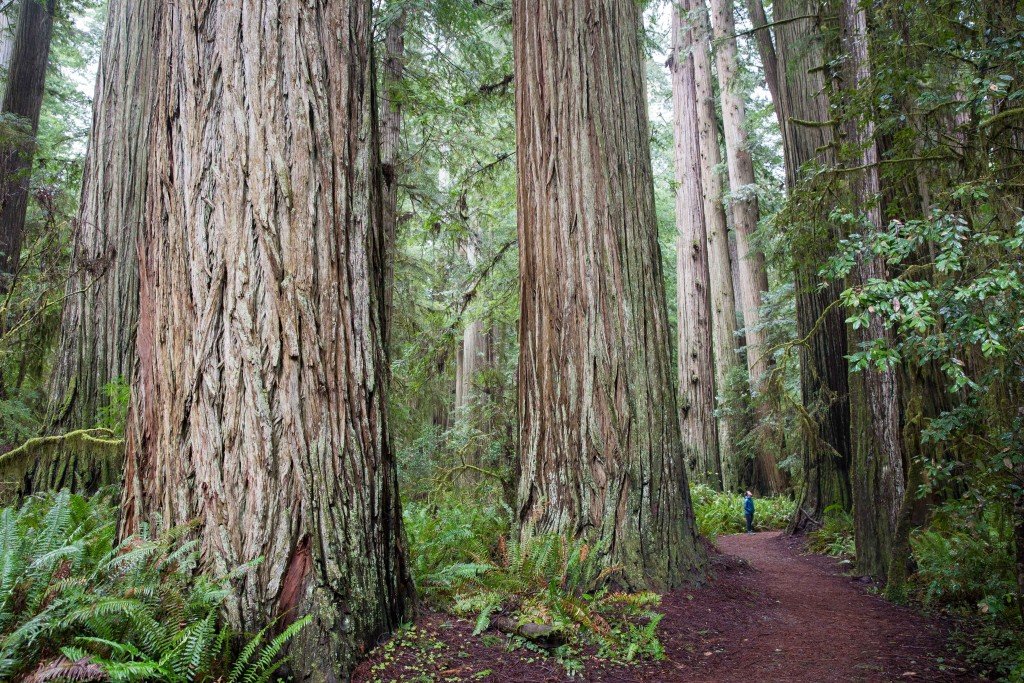 We pulled up to the Jedediah Smith Redwoods Campground, thankful for the premium campsite the host had given us. The group campsites are currently being converted to a couple regular sites; as a result, that area is typically closed to camping. However, we struck up a conversation with the camp host and he told us he would allow us to camp there for two nights since we only had our Subaru and a tent {rather than a motorhome.} As a result, we ended up camping in a relatively quiet site that was originally meant for four large groups; it was huge! 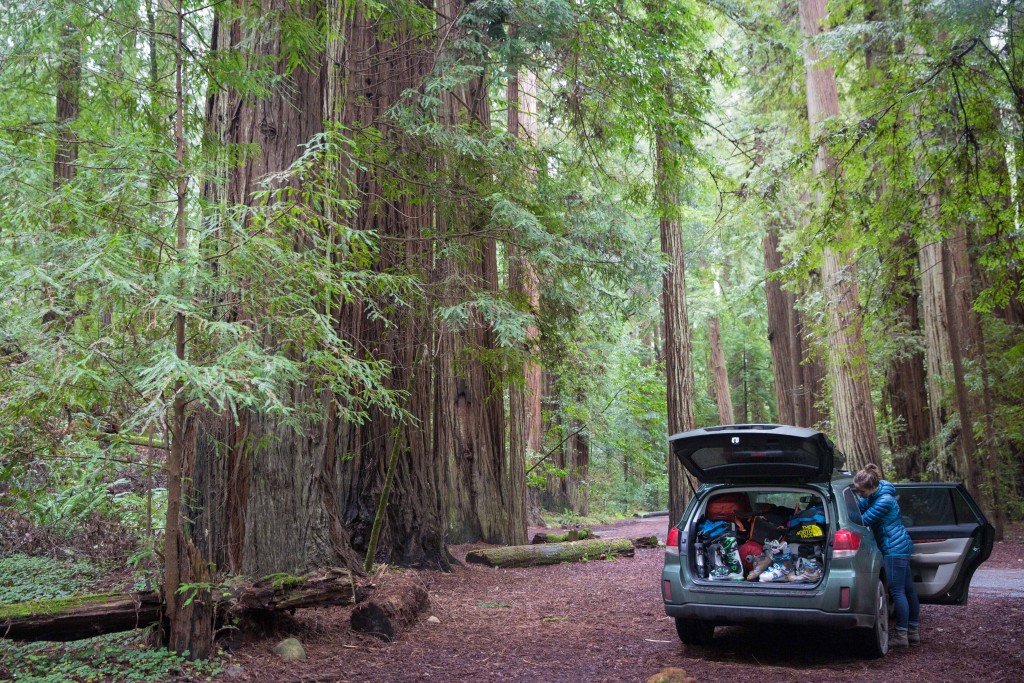 We spent our full day exploring the park on foot. First, we drove into the park on the ridiculously beautiful Howland Hill Road. Once the road turned to bumpy dirt, it turned into another version of Avenue of the Giant. Towering redwoods lined the wet road, reaching so far into the sky that I literally couldn’t see the treetops from inside our Subaru. We popped out of the car here and there, stopping at the Stout Grove to walk the easy half-mile loop while admiring the giants. 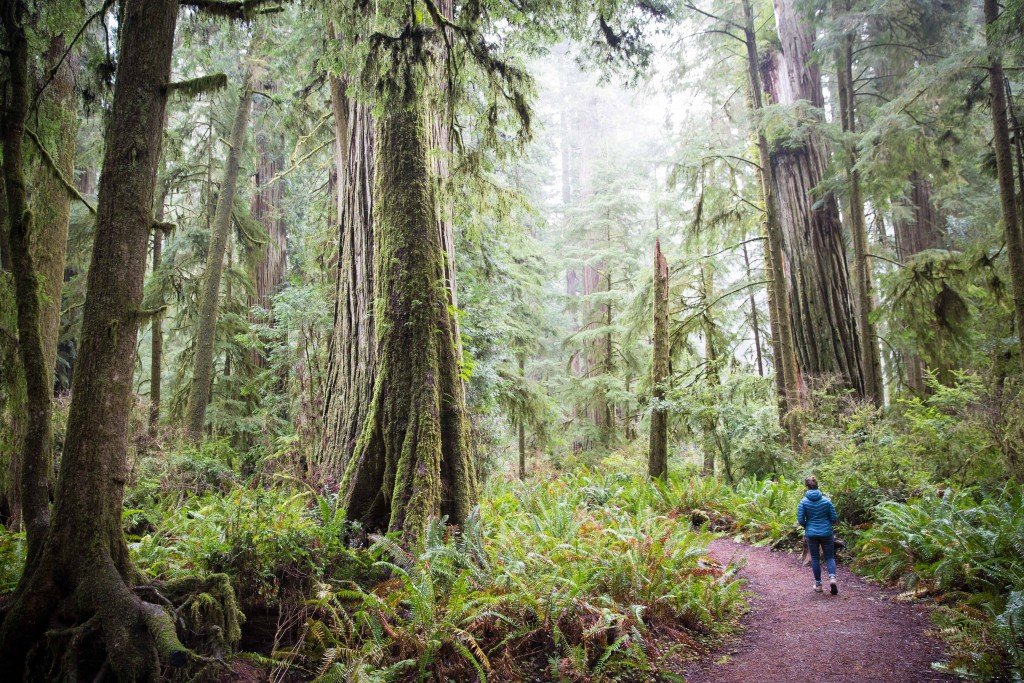 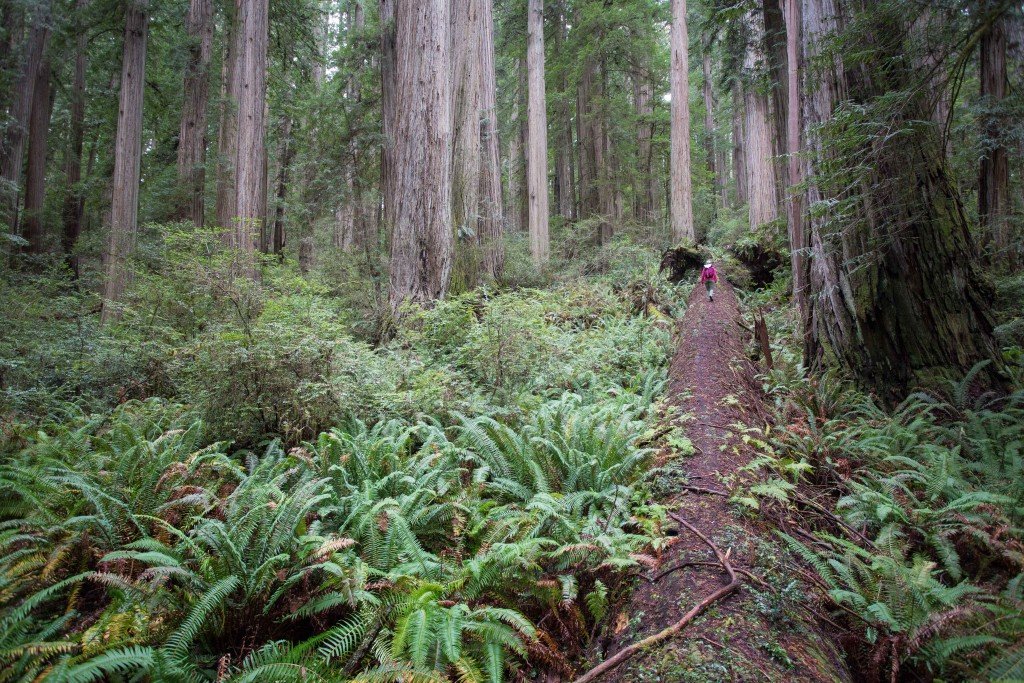 Afterwards, we found the middle of the Mill Creek Trail. Following Mill Creek for four miles, this trail was an easy, meandering trail that offers some decent old-growth redwood scenery. That said, Mill Creek doesn’t take you to the giant trees like the Boy Scout Tree Trail. Rather, it hints at the secrets within the park. With so few trails into the interior, Will and I found ourself intrigued by the possibilities laying within the depths of the forest. Were there even bigger trees? We pondered the original pioneers of the park– even Jedediah Smith himself– while walking. How difficult it must have been to explore this dense forest without any trails! 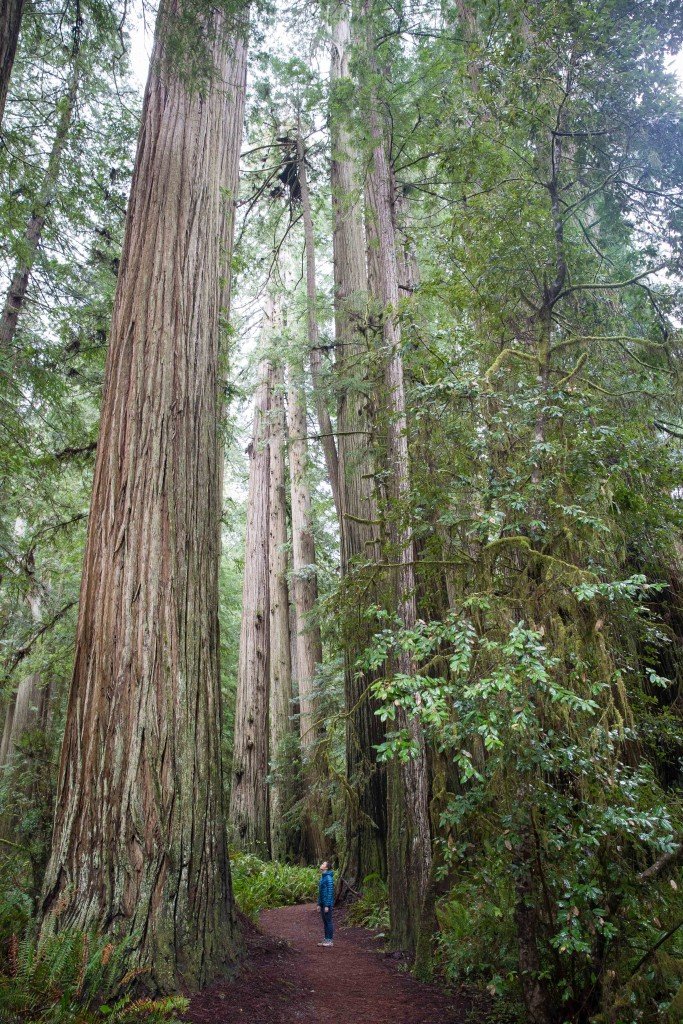 While the Redwoods shouldn’t be highlighted for their hiking, the magic of these enormous trees is something worth seeing. Despite their massive size, they have a shallow root structure. There is so much moisture in the area that the tree roots have never needed to grow deep into the ground; all the moisture is right on the surface. Unfortunately, this means the towering trees frequently get too top heavy for their own good. The roots rip out of the ground, and the mighty trees fall. Wonder what type of sound that makes if no one is around?! 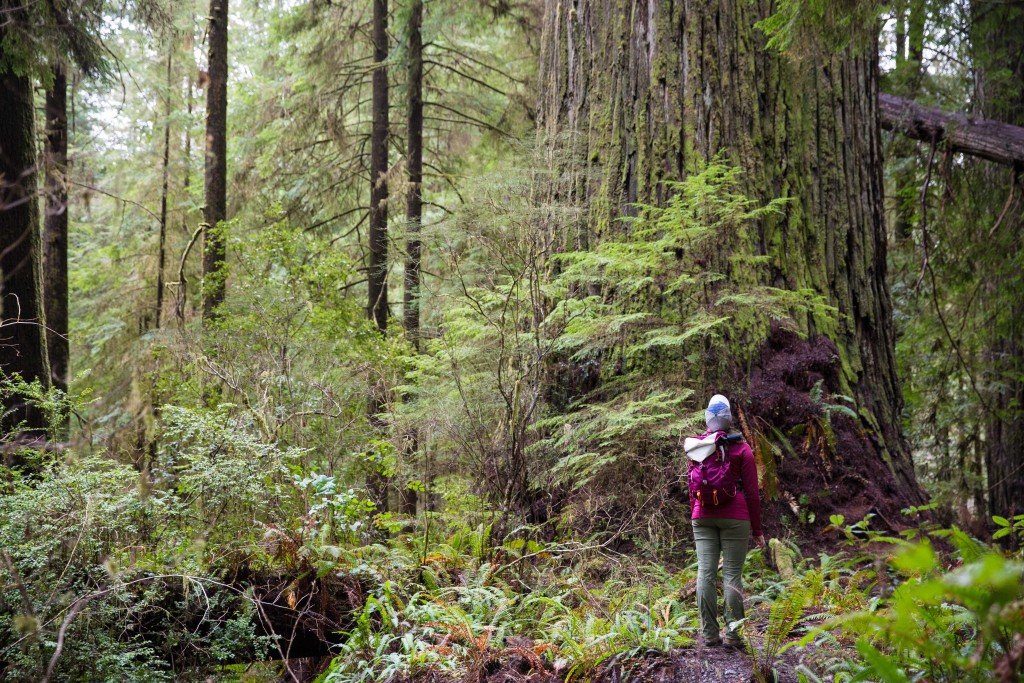 Giant Redwoods can grow up to 378 feet tall!

The three main natural destroyers of trees are typically insects, fungi and fires. How do redwoods live so long? They can evade all three of these enemies! Living redwood trees are resistant to insects and fungi, making them stand strong while other trees get wiped out by common insect problems such as beetles. More impressive to me, however, is that redwoods are resistant to fire! Redwoods don’t contain pitch or resin, and have a bark that is anywhere from 1-2 feet thick. This makes it incredibly hard for fire to reach the interior of the tree, so while you can see scars on the bark from past fires, it is rare for the flames to actually breach the bark. Instead, these bark scars act as timestamps for historical fires.

Find Your Own Adventure