When Misadventure Leads to Microadventure 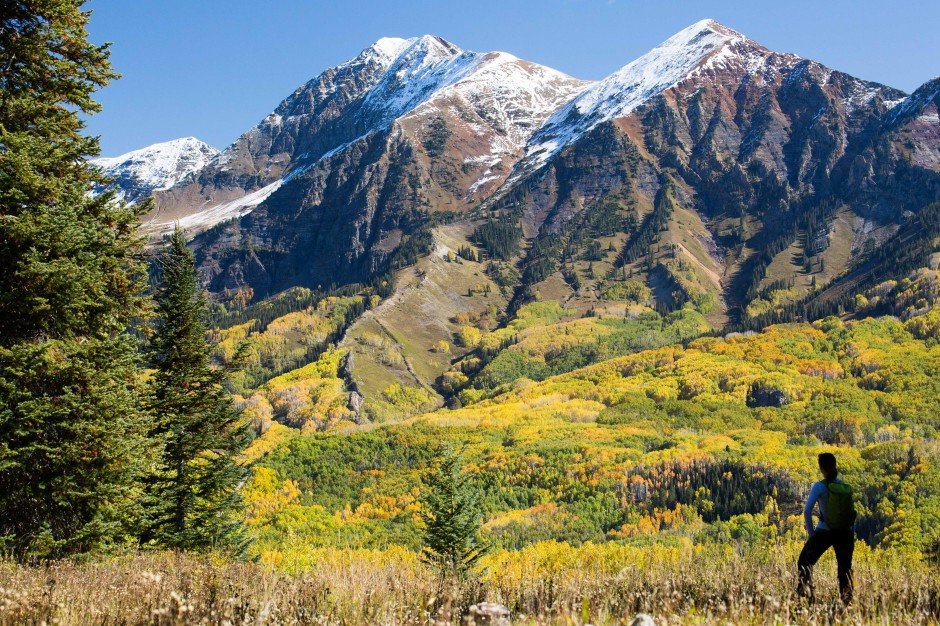 We were off to an inauspicious start last Friday.

This past weekend, Will and I had planned a backpacking trip to see fall foliage before it withered away with the summer months. We debated our options but finally settled on the Denny Creek Trail outside of Buena Vista. According to Google Earth, there were some large groves of aspen just begging to be photographed! However, the odds were not in our favor. 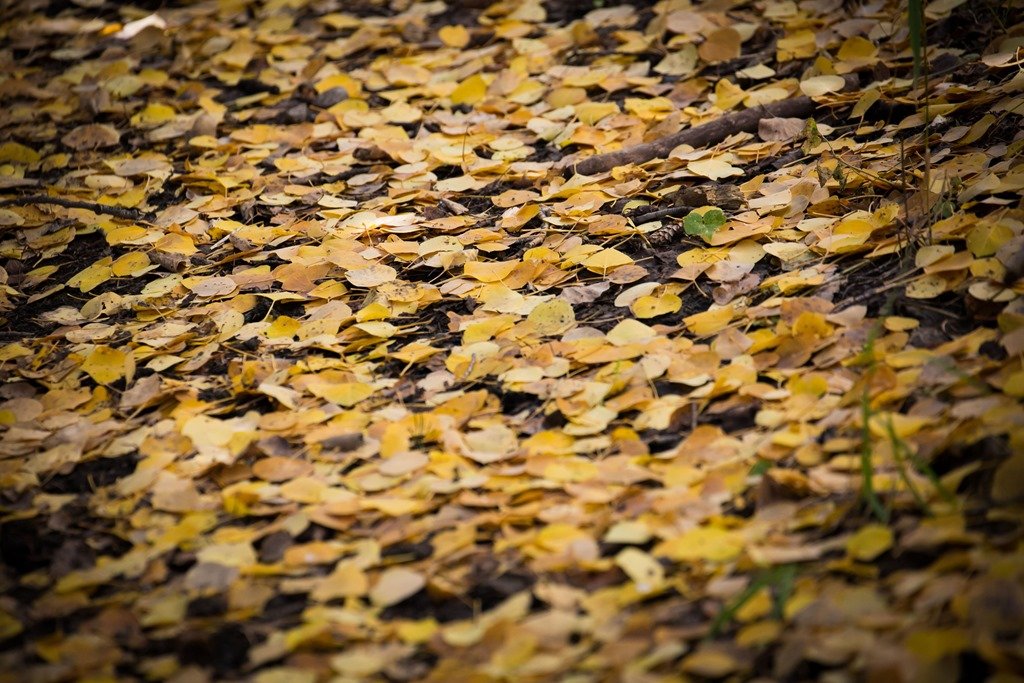 We planned to leave at 3 pm but alas, I couldn’t get all of my work done.

When I finally got home, I couldn’t find any of my gear…..including my fave OR Squadron Cap.

When we finally arrived in Buena Vista, we couldn’t find a map in any of the open stores.

Upon reaching the trailhead, we learned that the parking lot was paved. Our plans of camping at the trailhead were foiled! We decided to pitch our tent in the woods surrounding the trailhead, but the only flat area we could locate in the dark was 200 yards above the outhouse. Lovely.

The temps were cold–hovering around 30 degrees–but Will and I were both so tired that we barely noticed. After gathering the bare essentials from the car and hiking them to our temporary sleeping arrangements, we set up our double sleeping bag and Tally’s bed and passed out. 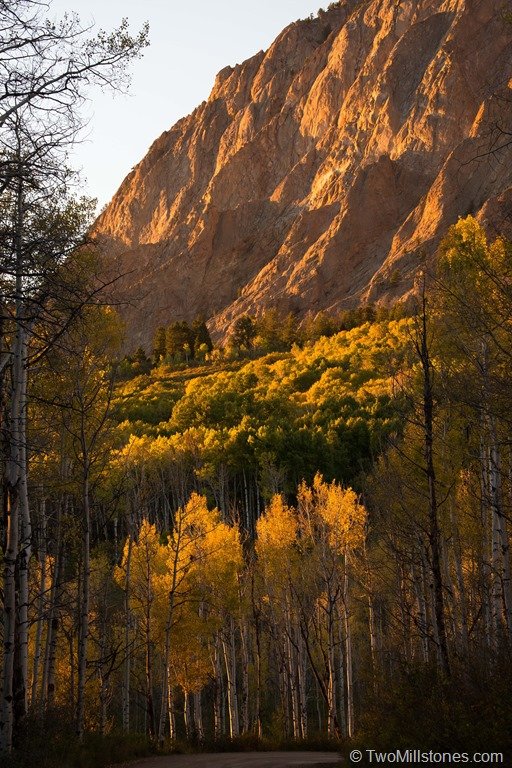 Morning arrived quickly and we awoke to the sound of car doors slamming. Day hikers setting out for Mt. Yale had arrived bright and early and Tally wasn’t having any of their chit chat! She growled and barked at their cheerful voices, definitively ending our night of slumber. I finally rolled out of my cozy cocoon to climb out of the tent with my furry friend. Once Will got moving, we headed back to our car, packed up our backpacks, and hit the trail.

Almost immediately, I could see that this trail was not all that we had hoped. We were hiking on Cottonwood Pass and it was clear that the recent snow storm had demolished what remaining fall color had existed. The aspen trees were stripped of any leaves, and we still had a lot of climbing to do. There would be no foliage at camp. I could see the disappointment on Will’s face and it practically broke my heart. The man simply wanted to photograph some fall color; was that too much to ask?! 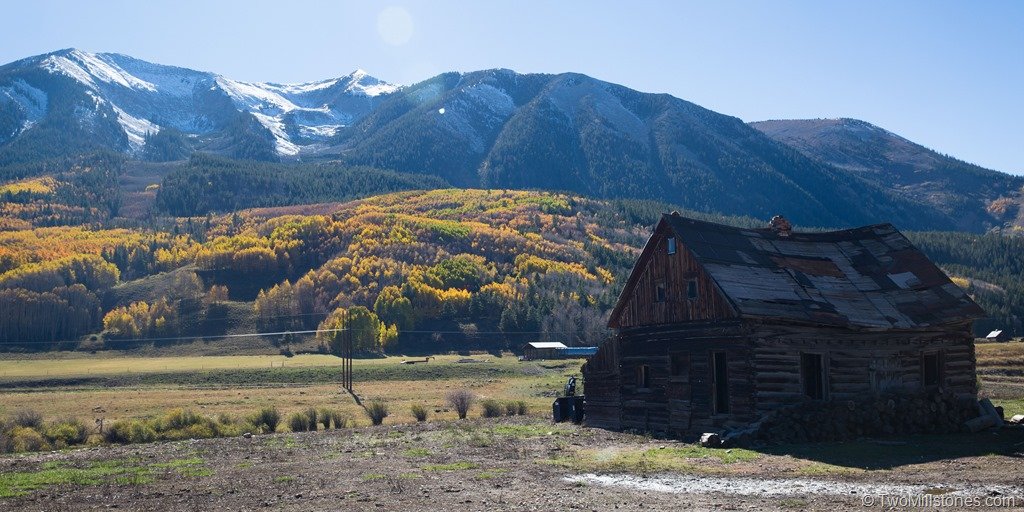 We were 45 minutes into the hike when I looked over in time to see Tally puking on the side of the trail. Honestly, I wasn’t too concerned since she had spent the morning eating every twig and tree branch she saw; no wonder her stomach was upset! I did, however, take it as a sign: this trip was clearly not meant to happen!

Will tentatively broached the idea of us turning around, hiking the hour back to the trailhead, and then loading up the car and making the additional 1.5 hour drive to Kebler Pass outside of Crested Butte. He had originally heard the aspen were at peak on the pass, but I had vetoed the trip: a four hour drive from Denver? That was way too far! However, I could see how excited he was to witness the beauty of Kebler and I knew I couldn’t turn him down again. So, we abruptly changed our plans, turned around and trekked back to the parking lot.

Upon reaching the car, we both felt lighter. Will was all smiles with his sights set on the golden leaves of Kebler, and I was merely happy because he was so enthusiastic. However, my grin quickly diminished when we tried to start my new car….and it wouldn’t start.

We stared at each other in disbelief as we listened to the engine rev but refuse to turn over. In silence, Will removed the keys from the engine and we stared out the window. It was 10:30am on Saturday morning, well over 12 hours into our trip, and nothing was going as planned!

After waiting it out for 10 minutes, we gave the engine one more crank in a last ditch effort. Fortunately, the car decided to cut us some slack and finally start! {And truthfully, I have absolutely no idea what that little display was about; we’ve had zero problems before or since with the car!} We breathed a sigh of relief, gunned it out of the parking lot, and pointed our car west towards Crested Butte.

Two hours later, we crested the summit of Kebler. There are no words. 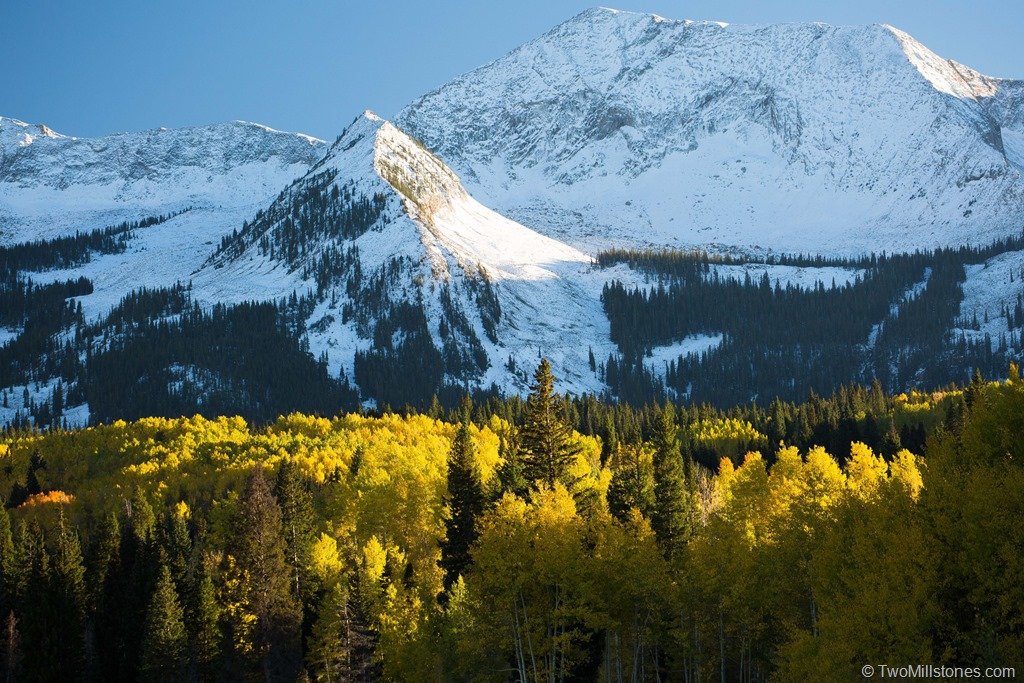 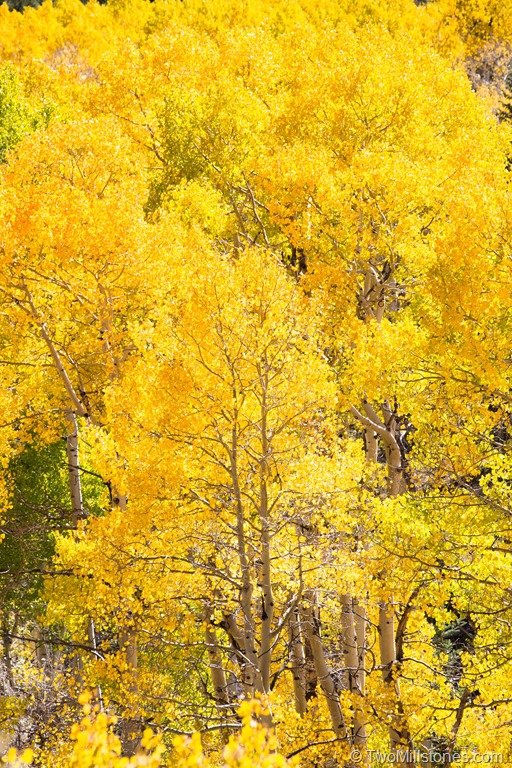 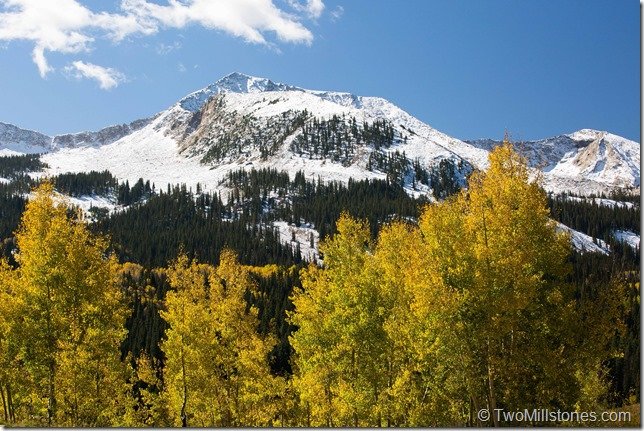 Kebler Pass is home to one of the country’s largest aspen groves yet I had never seen the area in full color! Miles and miles of aspen crawl through the mountains below the rugged ridgelines of the Elk Range. The Elks are some of the prettiest peaks in Colorado on a bad day and a recent snowstorm dressed the picturesque mountains up in their finest white attire, proving to be one of the most stunning landscapes I have ever seen. The glaring contrast of white-on-yellow was almost incomprehensible. 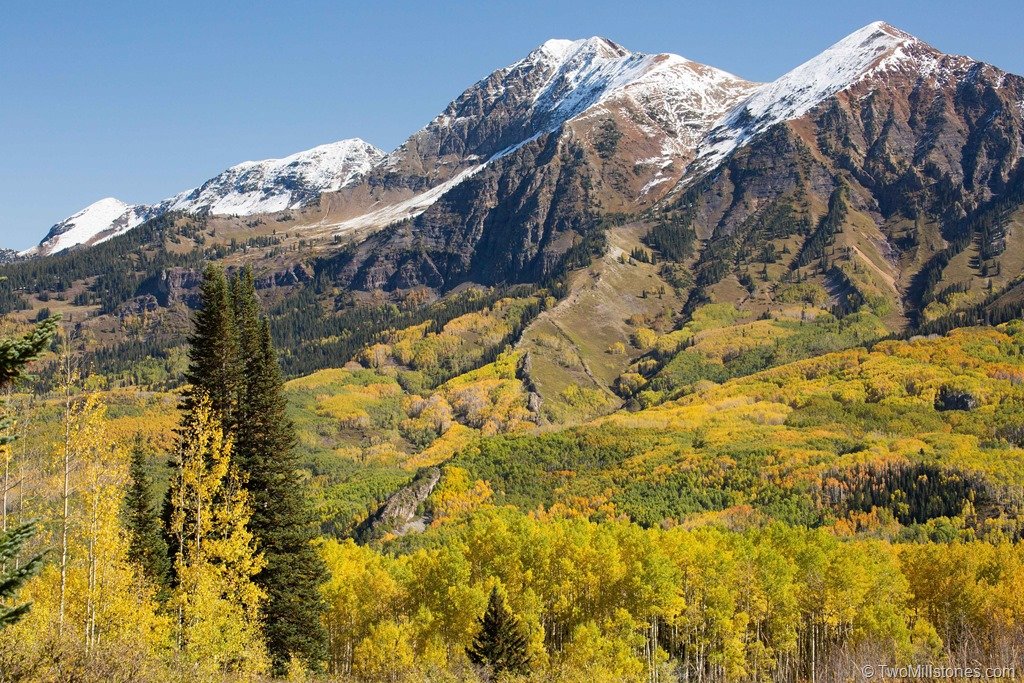 Saturday became the day of exploration. What had started out as a frustrating and disappointing misadventure quickly became an exciting day of discovery in our own backyard. We are both so accustomed to exploring the world on foot that we’d almost forgotten that microadventures can happen via a car, too!We drove around the various roads on Kebler Pass, constantly jerking the wheel in one direction whenever we saw a vista that was too gorgeous to pass up. Even Tals sensed our excitement from the backseat, calming down enough to hang her head out the window and soak in the view. Dogs may be colorblind but I’m positive she loved the scenery! 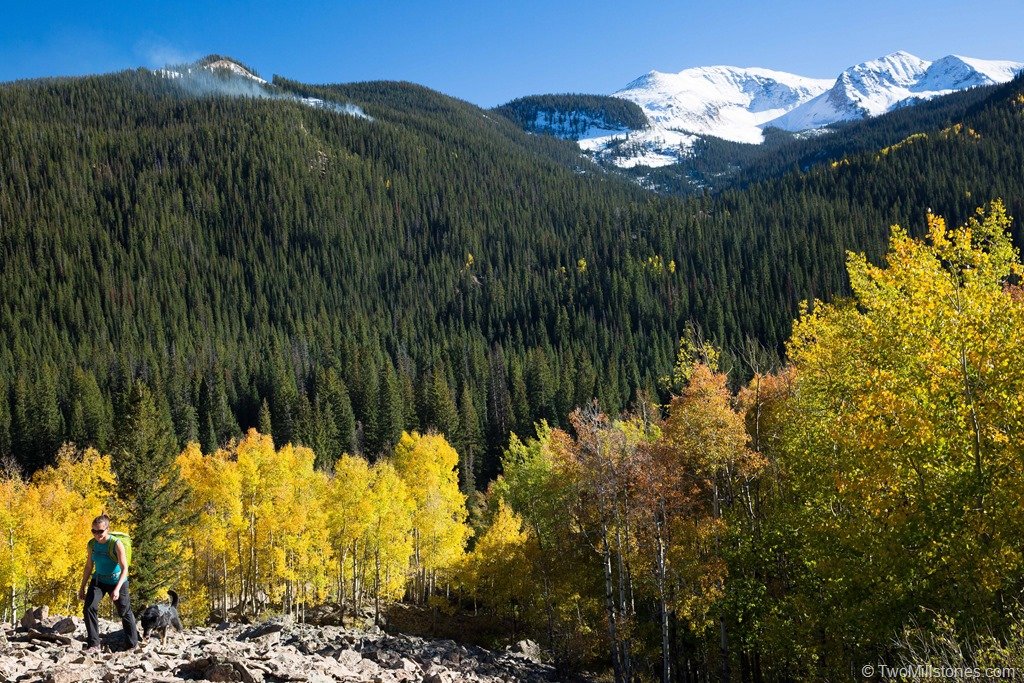 Dusk came quickly so we found a dispersed campsite on the side of a road and put together our tent, sadly shaking our head that we brought a small backpacking tent instead of a larger car camping home. We had no way of knowing that our weekend would change so drastically! After eating a backpacker’s rehydrated dinner, the cold night chill crept in and we retired to the tent for the warmth of our sleeping bag.

Kebler Pass is around 10,000 feet where winter is already showing her wintry face. We awoke around 6:30 on Sunday morning to find frost on our tent and crystals on the surrounding grass. After lazily throwing our gear in the back of my Subaru, we started the car and headed to a nearby trailhead. It was a balmy 28 degrees! 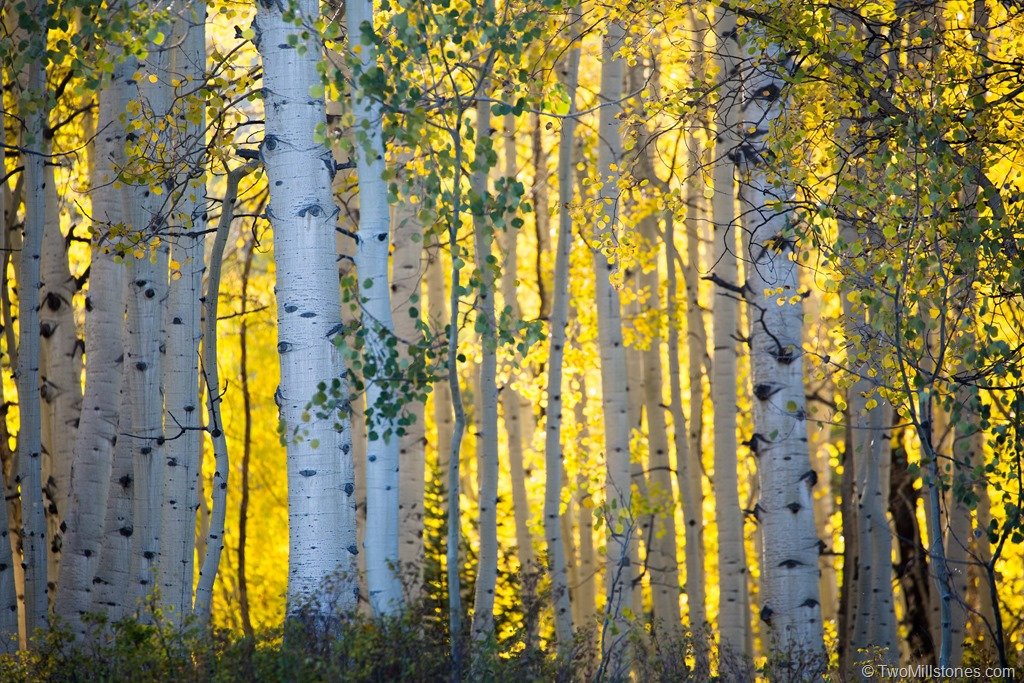 The day before we’d stumbled on a nearby trail to the top of Beckwith Pass. Due to the spontaneous nature of the trip, neither of us had a clue where the trail went or what we would see; we simply hoped it would climb high enough that we could catch a birds-eye view of the stunning fall foliage. Fortunately, we weren’t disappointed and our six mile hike led to one of the most beautiful vistas of the entire weekend: 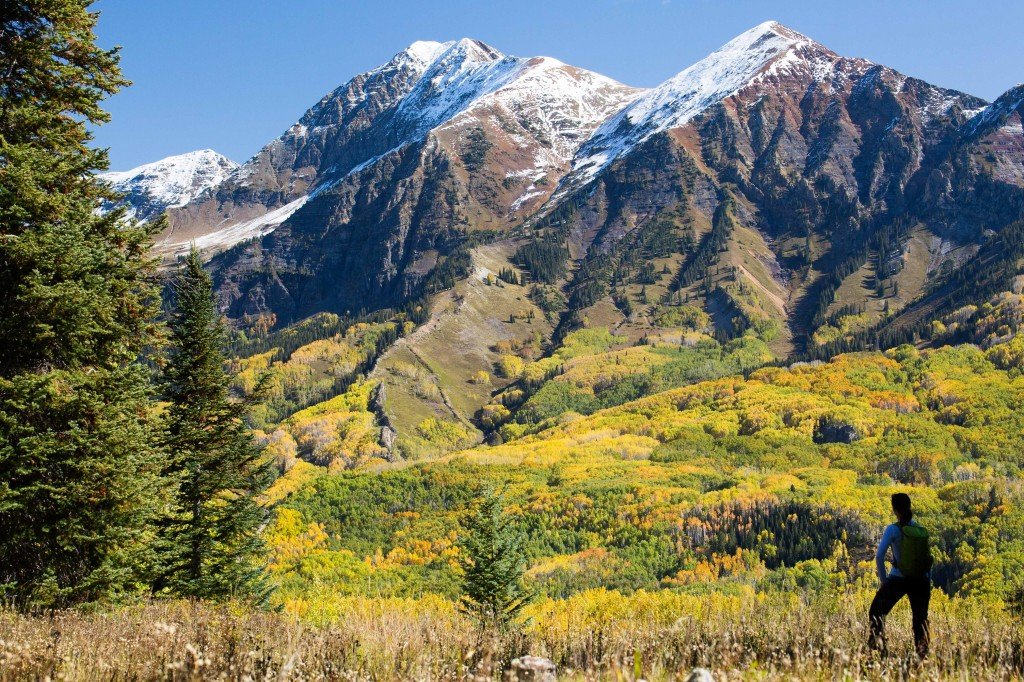 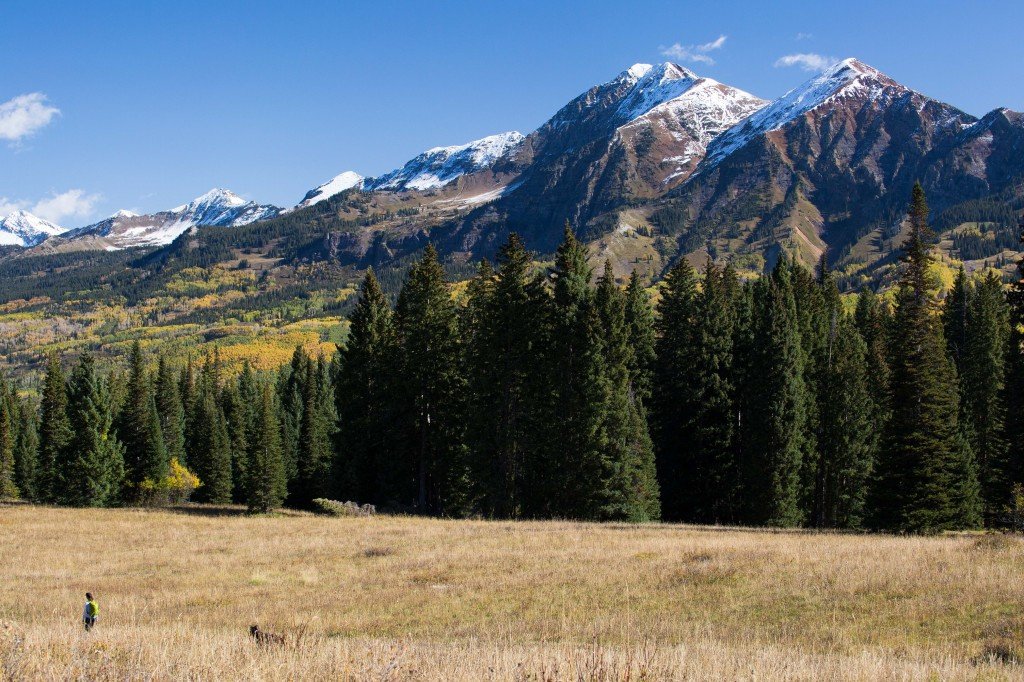 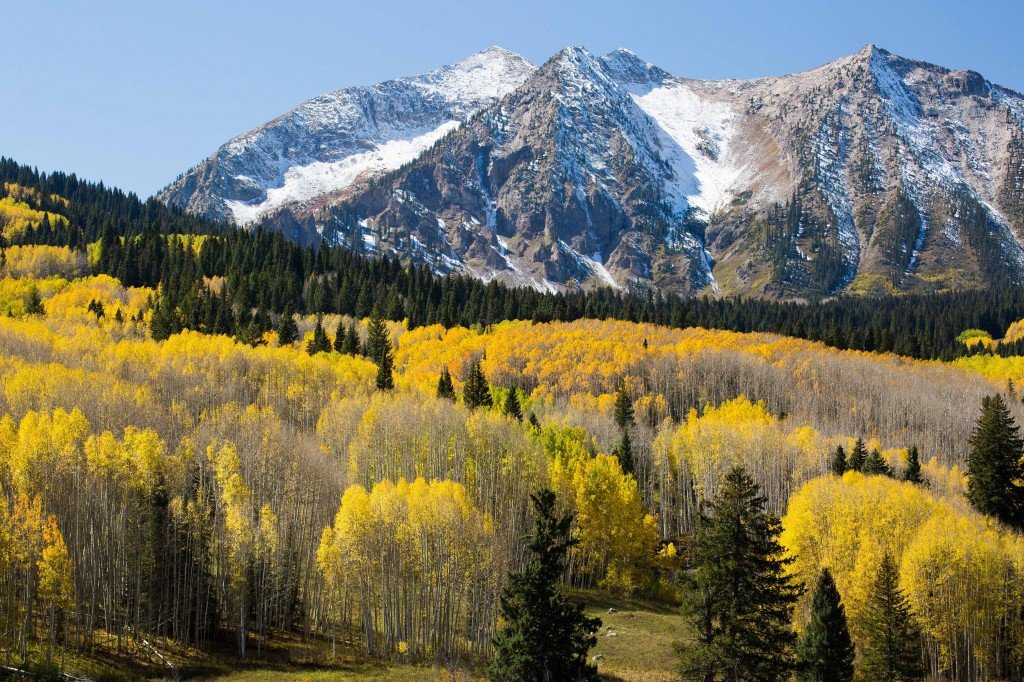 We returned back to Denver late Sunday night. We were tired, dirty, behind on work, and far from our original weekend plans. However, both Will and I agreed that this was one of the best weekends in recent memory. I like to think that adventure is a normal part of our lifestyle, but this weekend was a reminder that adventure can happen in all forms. It doesn’t have to be the Northern Lights in Iceland or riding camels in Jordan or learning to surf in Bali. In fact, it doesn’t even have to include remote wilderness locations where the bears outnumber the people. Our little family of three—including Tally!—overcame our disappointing misadventures to find an epic microadventure from the front seat of our car.

What is your most recent microadventure?

Antelope Canyon 50k: The Next Adventure

Five Reasons Why You Should Try Camping