Moab Trail Half Marathon {The Recap} 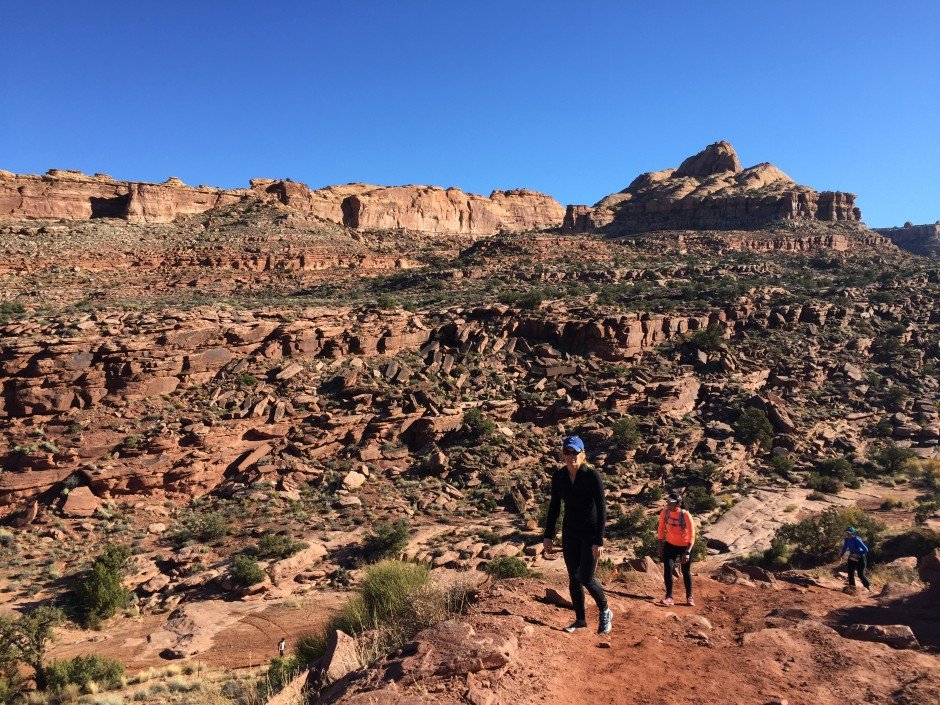 For the second consecutive year, I trekked westward to Moab, Utah for the annual trail racing series. And just like last year, I ran the half marathon. Spoiler: if a race is even better the second year when compared to the first, you know it’s a winner!

Truthfully, I was nervous going into this weekend. I haven’t done much running since last spring and I totally fell off the wagon in the months leading up to our wedding. I kept thinking I’d get back to regularly scheduled programming after we returned from our honeymoon, but alas, life happened. As such, I headed into this weekend with minimal miles on these legs: plenty of shorter ({3-4} mile runs, one six-miler, and one eight-miler. Total. That said, I do hike a lot and for a runner like me, hiking is a critical component of trail running. So, I viewed Moab for what it was: a great weekend with my girlfriends, enjoying the beautiful outdoors!

I set my alarm for 6 am on Saturday morning, affording plenty of time to get ready, pick up my race packet, and get to the starting line for our 8:30 start time. Imagine my surprise when I stumbled into the kitchen of our condo only to discover complete blackness when I flicked the light switch.

I reached for the coffee maker, plugging and unplugging it from the wall, as if that would make the power happen. Still nothing. I yelled at my friend {who was still sleeping}, telling her that something was wrong. I then found the fuse box and started flicking switches, thinking maybe that would help. Still nothing. I ran outside and saw all four of our condo rentals were dark. In fact, every light on Main Street was out too.  Finally realizing that this problem reached farther than just our rental units, I fumbled through the darkness to my phone, eventually pulling up the Rocky Mountain Power website. Sure enough, I was greeted with this message: 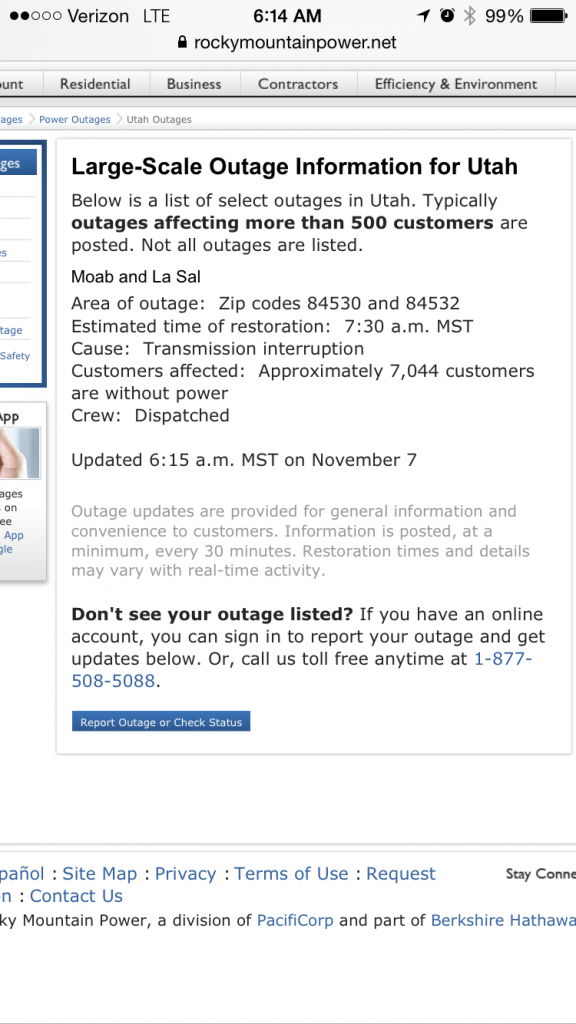 Turns out, the entire town of Moab was without power; definitely not the best way to start your race morning!

{Note: I had a few snarky Twitter followers leave sassy comments about how I should “imagine what it’s like to live in a third world country without any power ever.” Y’all, I get it. Losing power isn’t the end of the world. If we had been camping, it would’ve been fine with headlamps and lanterns. But alas, we were not, and it’s a bit shocking to wake up to find yourself fumbling through the darkness while preparing for a half marathon!}

We were off to an inauspicious start. We had no coffee and no breakfast: our usual oatmeal couldn’t be eaten because we couldn’t boil any water. Instead, I wolfed down a Lara bar that I had brought for race fuel. It would have to do! 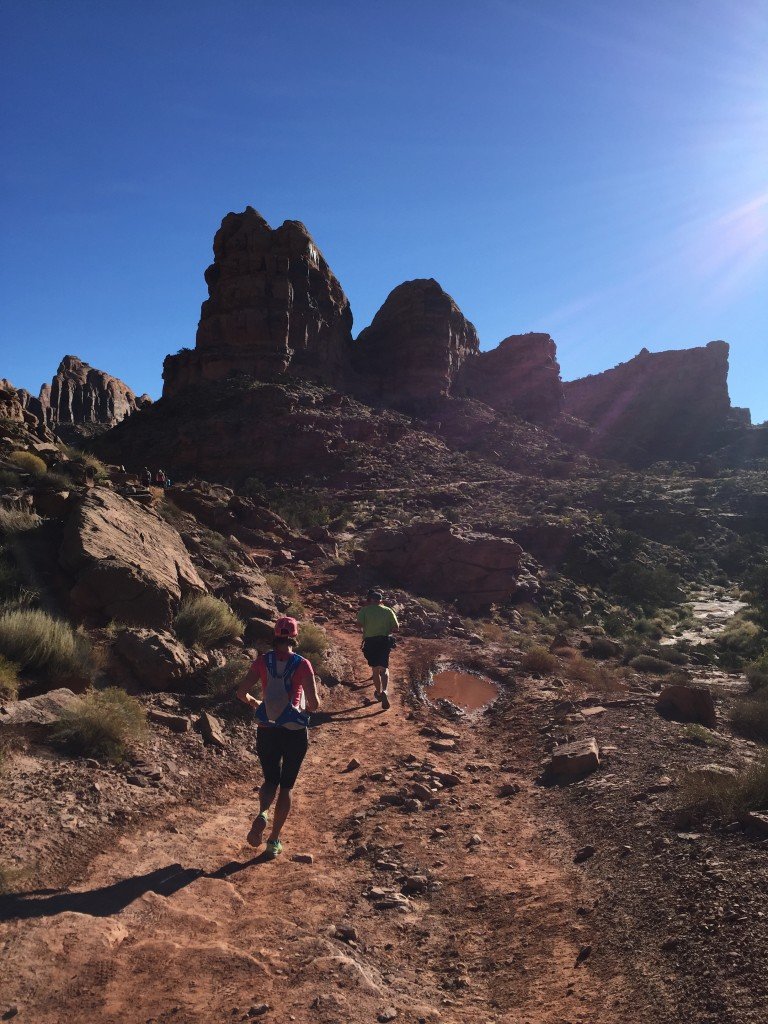 I then tackled my gear. I carried no less than five outfits to Moab since I wasn’t sure what I wanted to wear. It was high 20s in the morning for the race start, but it was supposed to warm to low 50s by the time we finished. All of these options were chucked in a large duffel bag in our bedroom which happened to be the darkest room in our rental. We couldn’t see a thing, so I grabbed some clothing and hoped for the best.

In all of the madness, I realized that my bladder was leaking for my Jenny Vest. Double whammy! I had already loaned both my extras to my friends, so I was without a water supply. This caused a bit of additional panic in my morning since I remembered that there are minimal water stations on the Moab course. Running in the desert without water does not equal a good day, amiright?! 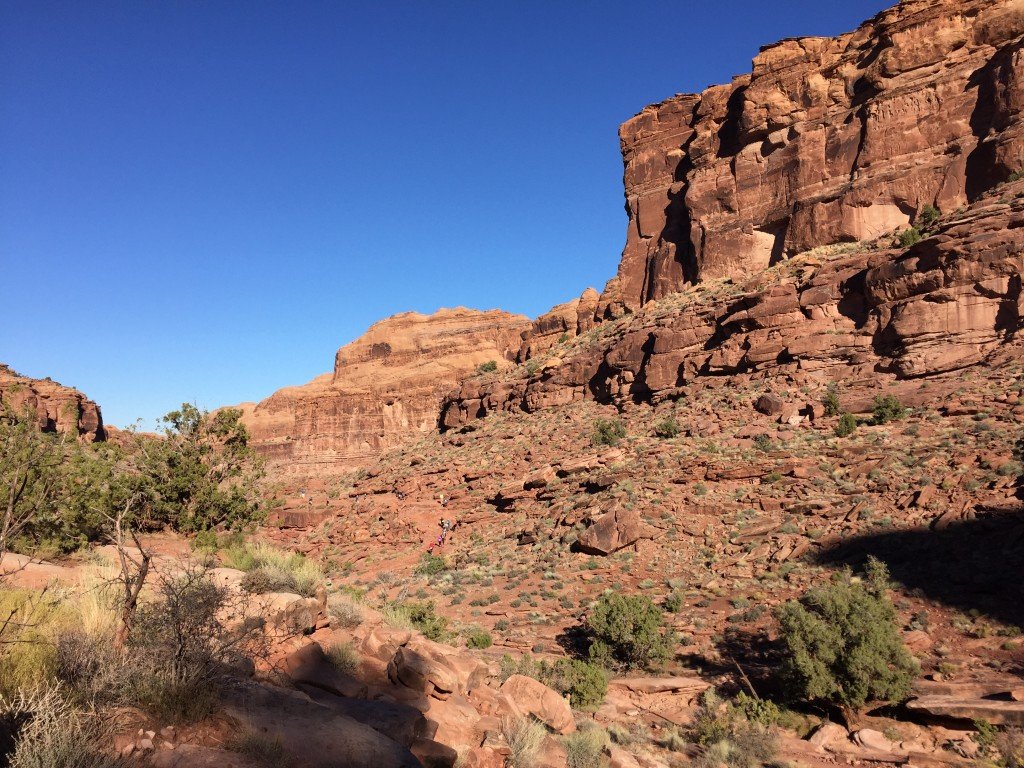 Fortunately, my Jenny Vest does come equipped with two 8-ounce bottles on the front straps. It wasn’t near enough water for 13.1 miles, but it was better than nothing. And of course, there is always a silver lining: my hydration vest was super light!

After our chaotic morning, we finally loaded up in the car for Cindy’s husband to take us to the race start. We all felt a bit overwhelmed and unprepared after our confusing morning, but we had done our best. It was time to focus on the day ahead of us rather than the madness behind us. 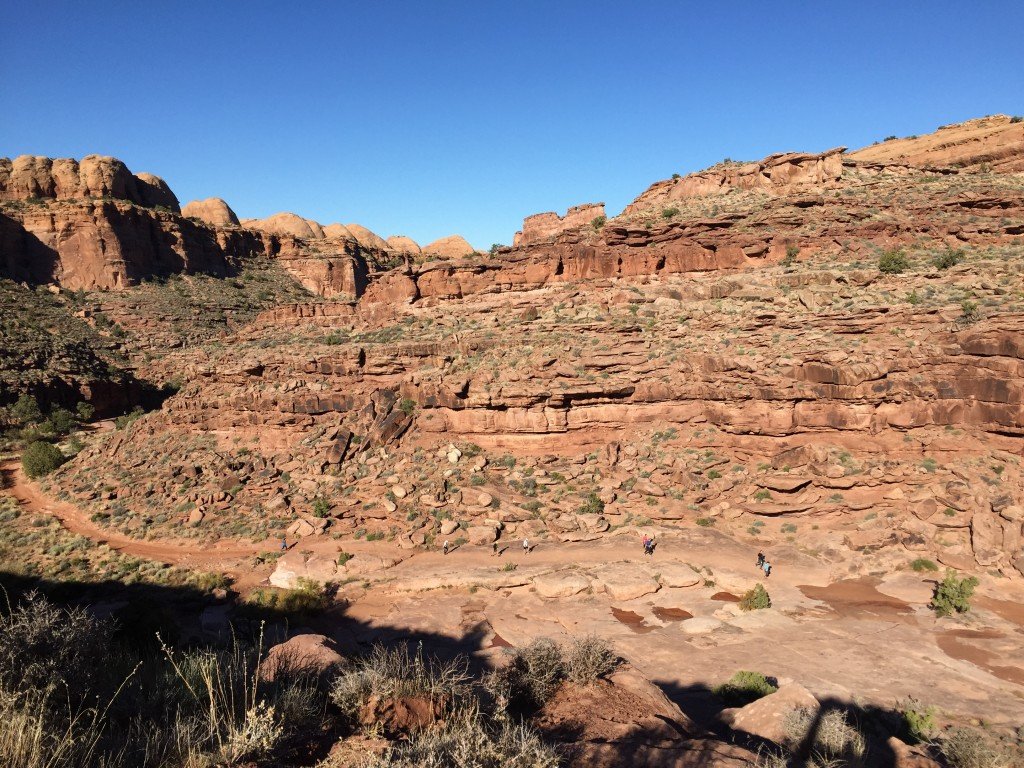 Thankfully, the rest of the day went amazingly well! Aside from my minimal water and lack of hat, I hadn’t forgotten anything critical. We gathered ourselves at the race start, waiting for our back-of-the-pack heat. Once our wave number was called, we lined up in the corral and took off!

Just like last year, I was astounded by how beautiful this course is. It was a frigid morning and we spent the first hour in Pritchett Canyon, running through the dappled sunlight and blocks of shade. The course climbs 1000 feet over the first four miles, so the initial pace wasn’t fast. We all just found our running legs, warmed up our hands, and chatted.

The five of us had agreed to stay together all day, pace be damned. One of our group had never run a half marathon in her life, so Moab was her absolutely first foray into double digit-mileage. I was severely undertrained, and two of the other gals recently had babies. My point is this: we weren’t going to kill it, and that wasn’t our intentions. For us, it was simply a day with friends, enjoying the sunshine, and capitalizing on our much-needed time to catch up on life. Perfect. 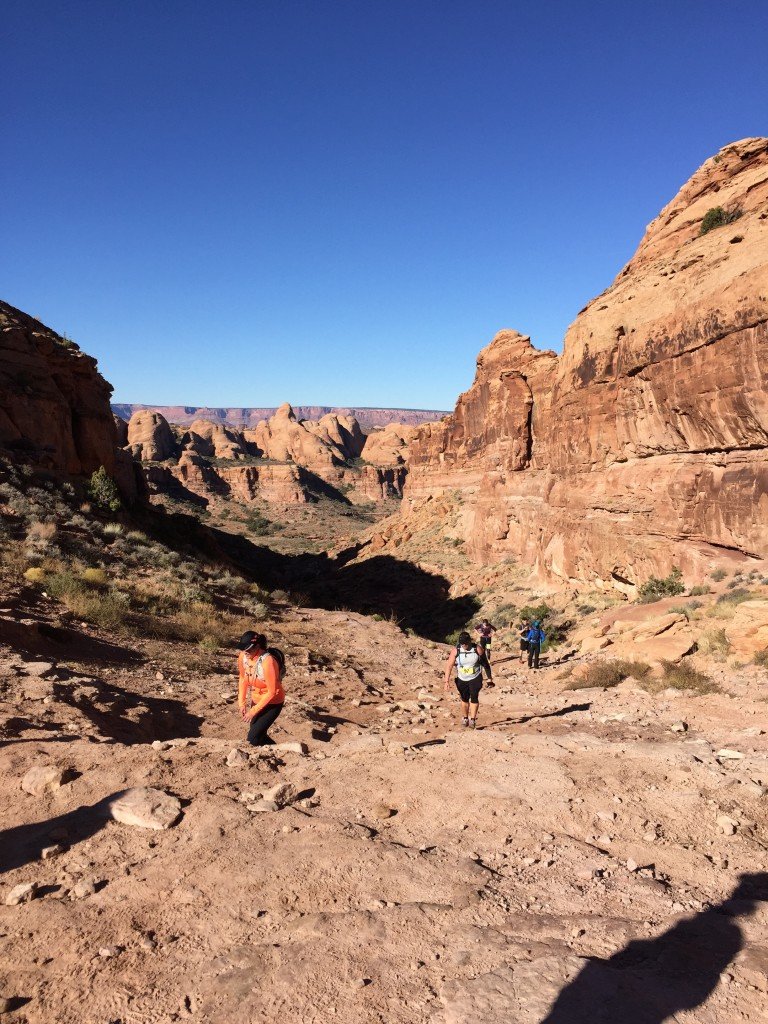 The trail out of the canyon eventually narrows and concludes with a steep, rocky climb up to a ridge. From there, it’s a fun, sandy descent down to the first aid station around mile six. Feeling a bit parched from my teeny tiny water bottles, I thanked the volunteers as I filled up my small containers. I felt like I was drinking from a sippy cup all day!

From the first AS, we picked our way up some wider rocky trails, spreading out our group just a bit. We reformed around mile 8 when Angela and I stopped to talk to a runner. I had just rolled my ankle pretty severely and was feeling some discomfort while running. As I began feeling sorry for myself, we rounded a bend to see a 30-something man hobbling on a ridiculously swollen ankle. It was so huge that his skin was spilling over the top of his sock and he was struggling to walk. Since most of my friends are medical professionals, I knew one of them would have some pain meds, so we stopped to talk and see if we could help. The guy was a trooper though and rather than have us notify race officials at mile 11, he told us he preferred to hobble the next few miles on his own. Suddenly, my minor ankle pain seemed like nothing. It just takes a bit of perspective, doesn’t it?

We left the man with his friend and continued on to my favorite part of the course: Hunter Canyon. And, just like last year, I was shocked by the scenery. The reds and oranges of the rock stood in bright contrast to the bluebird sky and I found myself smiling with happiness as we picked our way through the technical and rocky terrain. It was a gradual downhill full of rolling single track and technical rock drops. In short, this part of the course is my jam!

We hooped and hollered as we cruised through Hunter Canyon, creeping up on the next aid station. Last year, we had experienced a huge pileup at a large rock drop, waiting in the shade for 30 minutes before the crowds of runners cleared the rock. The race directors learned from their mistakes and offered multiple routes around this technical section this year. We didn’t experience any wait time and were able to cruise onto Kane Road for the infamous switchbacks. 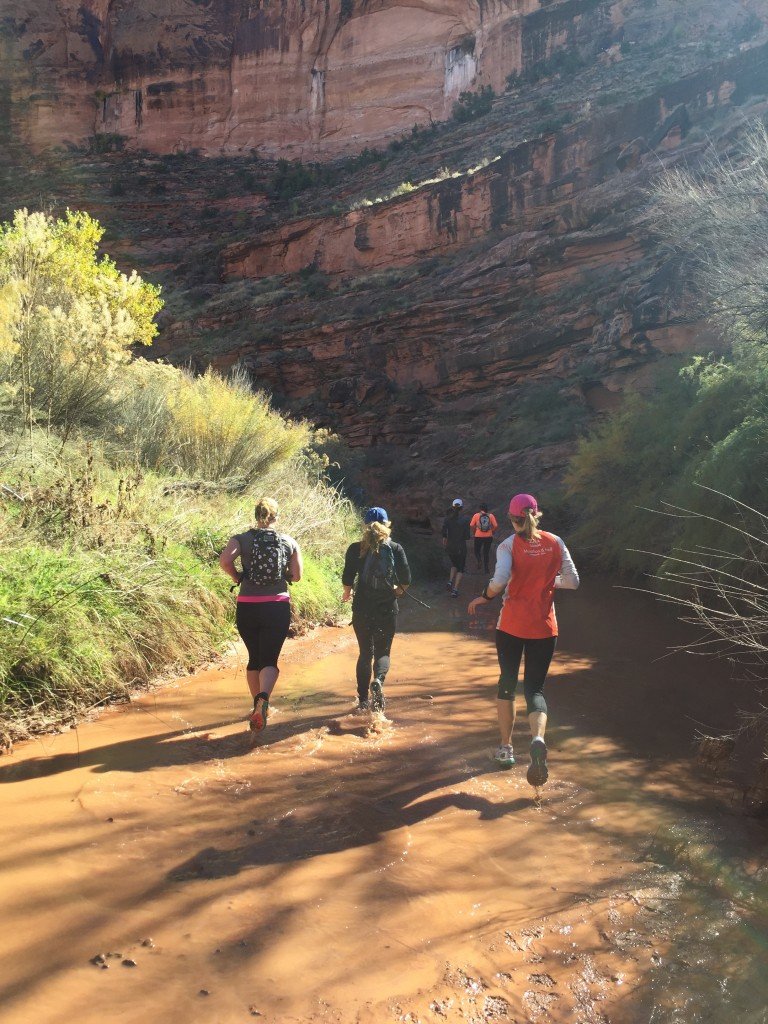 We climbed the steep road for a mile before dropping back into tight single track on the Hymasa trail in the Kane Creek drainage. Cindy and I warned the girls what was coming next: freezing cold water!

The race always tromps through a mile of drainage and the amount of water varies from year to year. This year, the water was less deep {in my opinion} but there was a lot more of it….and it was freaking cold! We spent a mile sloshing through knee-deep water that was just above freezing, yipping in pain every couple minutes. I always think the water will feel *good* after a long day of dusty trails, but it was painfully cold this year. Actually, the weather was a bit cooler in general: a few of the girls never even took off their long-sleeved shirts during the race! Thankfully, this section is merely one mile from the finish line, so you don’t spend too long running in sloshy shoes. 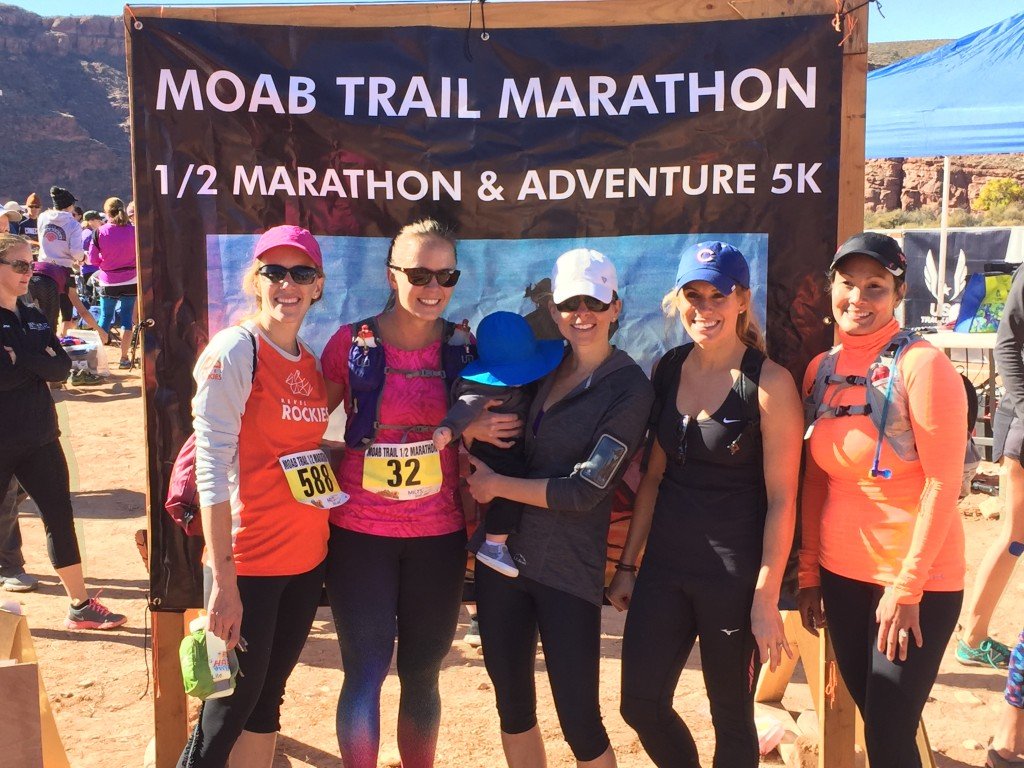 After finally escaping the arctic water, we covered a half mile on the dirt road before finishing the final half mile on a circuitous single track route. We clambered up the final steep incline before crossing the finish line. Yay for another year at Moab!

Final time: Not sure as official results aren’t available yet. My Garmin said 3:48-something while Charlotte’s reported 3:08. We later realized her Garmin stops for paused time, so her time was our actual moving time while mine included all of our AS and bathroom breaks, as well as helping the man with the swollen ankle.

Would I run this race again? Absolutely! The race curbed a few of the minor annoyances from last year, making it even more enjoyable the second time around. I’d love to actually prepare for this course and try to run a faster time, but I say that every year. We’ll see!

Final Thoughts:  I walk away from this year enthused about running, and this year was no exception. Honestly, I was very proud of how my body handled the 13.1 miles on virtually no training. I had zero soreness or stiffness on Sunday {even after spending six hours in the car on the drive back}, and even went to CrossFit on Monday. It was almost like I hadn’t done anything serious, which gives me hope….because I’ve got some big plans on the horizon!!