{For the big surprise and the first recap of the trip, click here or here.}

I could say Monday morning dawned bright and early as we headed to the local bakery for fresh bread, but that would be a lie. Instead, we managed to CRASH and sleep well through the morning! In fact, I don’t think we ever left the hotel earlier than 11am because we would sleep so long. After coming off my mysterious sickness, I knew my body needed it, but it was still crazy bizarre for an early-riser like myself. 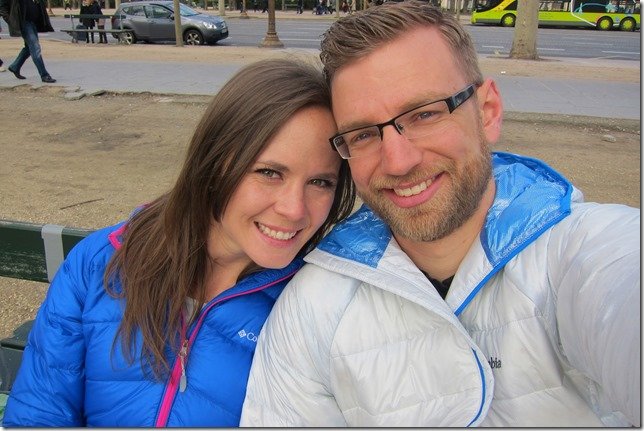 This is what happens when I use my photos…smiling faces and nothing more!

We decided to eat breakfast at a nearby restaurant and it was here that Will learned a lesson: that man eats far more than a normal Parisian! We ordered breakfast and per usual, Will ordered two: a crepe and a sandwich. The waiter must have thought he misunderstood our broken French because he only brought Will one of his meals. I mean, what normal person would order TWO meals for lunch, right?! 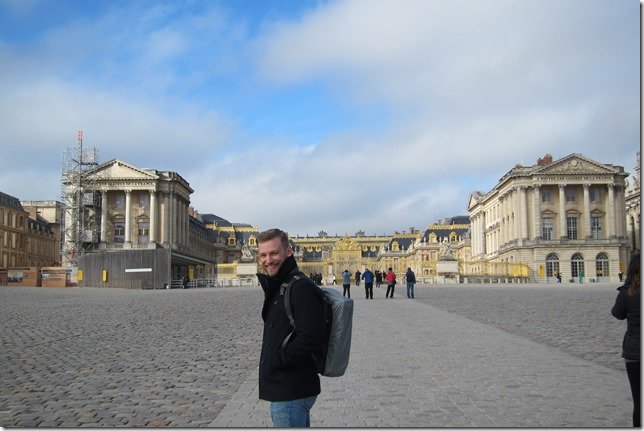 We then hopped on the Metro to Versailles, the home of Louis XIV. Again, I had visited back in 2002 but I really wanted Will to see it since he loves historical stuff. We navigated the subway like old vets but our confidence quickly faded when we realized Versailles was actually closed. Yup, we hadn’t bothered to look anything up and apparently the chateau isn’t open on Mondays! We had noticed the lack of crowds but assumed we had outsmarted everyone by coming on a Monday. Not the case! We briefly wandered around the gardens but since it is winter, there wasn’t a lot to look at, so we headed back to the city. Live and learn I guess! 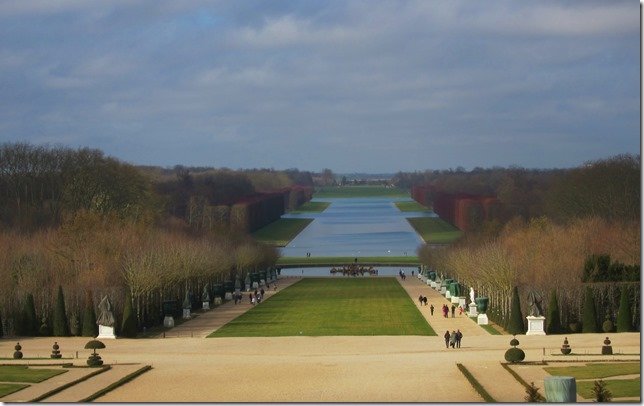 The beauty of not having an itinerary meant we were never stressed or pushed to cover ground. After our failed trip to Versailles, we basically wandered the city for the rest of the day. We ate crepes in the Latin Quarter and spent some more time in Shakespeare and Company. We meandered back to Trocadero and I was psyched to catch a dancing quartet of street performers. They put on a 20-ish minute production, and let me tell you—there is NOTHING like watching break dancing in front of the Eiffel Tower!

Will had heard me mention how beautiful I thought the Eiffel Tower was at night {compared to the daytime scenery} so he wanted to ensure he proposed after dark. Under the ruse of his photography, we found a park bench along the River Seine with the Tower as a backdrop. I settled in on the bench and prepared for a long wait since I know how dedicated Will is to his photography. After all, I’ve been around this block before! Turns out, he was actually prepping his camera on the tripod to capture our engagement moments, but I still thought he was snapping night photos of the Tower. The man literally thought of everything!

Obviously, y’all know what happened next: Will proposed to me on that bench! 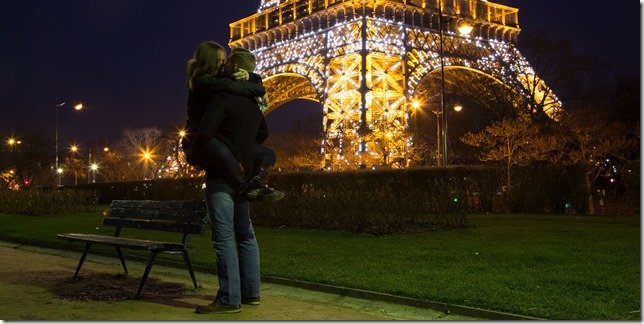 I imagine some of you will feel like I’m leaving you hanging with that minimal of a description, and maybe I am. Our engagement is one of the best things to ever happen to me, but I’d also like for it to stay private. It’s a moment that Will and I will remember forever, and it still brings a smile to my face.Having said that, you all know what my answer was! 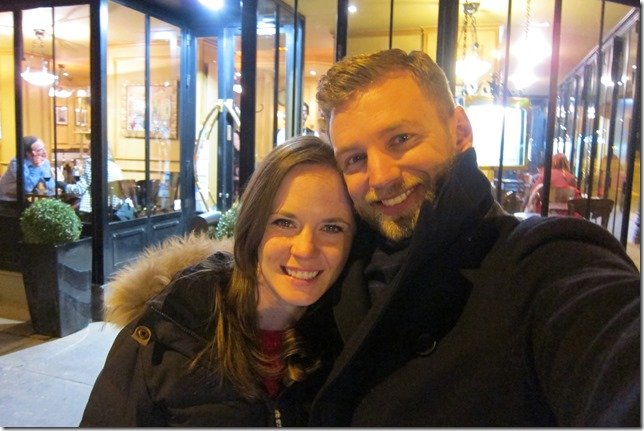 Dinner after our engagement

Determined not to let the palace beat us, we headed back to Versailles on Tuesday morning. Truthfully, Will didn’t have a preference but I knew he would like it so I was adamant that he visit! Luckily for us, the palace was actually open this time around and we got to wander the rooms. Apparently, Louis moved the capital from Paris to Versailles in 1682; before that, it was only a country village! The royal family was forced to move back to Paris at the start of the French Revolution in 1789, but it was still so crazy to look at the chateau and think of it as the center of French democracy. Y’all, Louis lived like a boss! 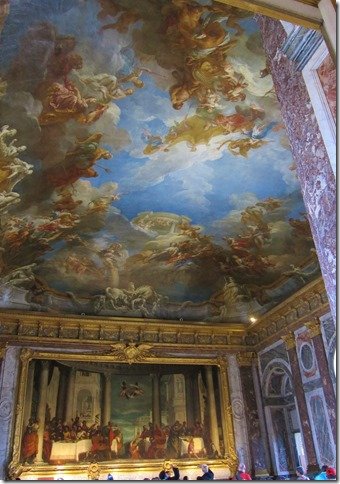 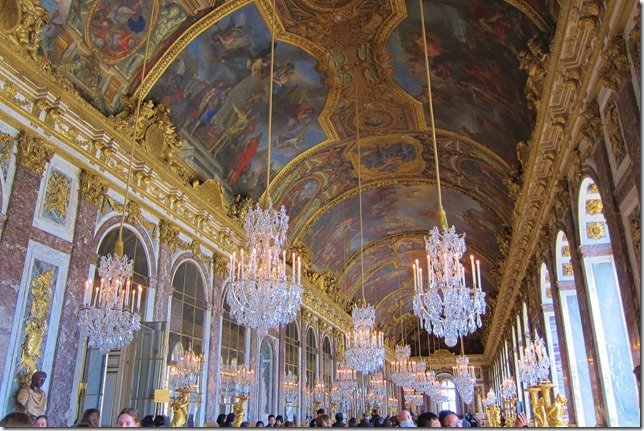 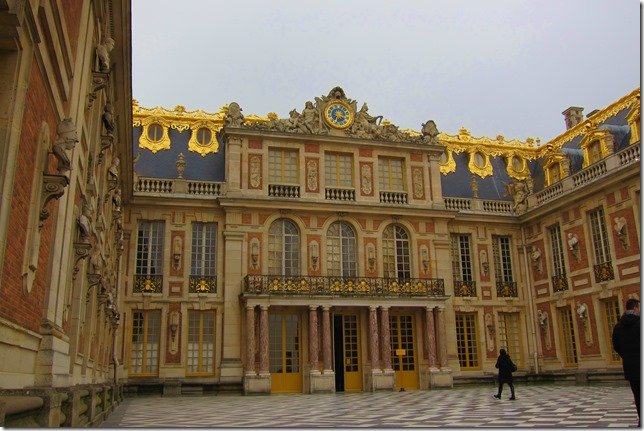 I told Will I wanted to purchase a bed like Louis had with individual blackout curtains around the frame. Too much you think?!

Also, I need to ask anyone who has been there: was there ever a room at Versailles that contained antique string instruments? I had this vivid memory of a room with beautiful old violins and cellos, and one was even a Stradivarius. I even have a photo of it! Apparently my memory is absurdly bad because there was no such room! I was so confident that I told Will they must have moved the room or closed it for restoration….will someone please tell me I’m right so I don’t feel like such a lunatic?!

If there was one place you could visit in the world, where would it be?