There are a lot of factors that go into my opinion of a town. What does it look like? How is the weather? What type of outdoor activities exist in that neck of the woods? Is there beer?

Fortunately for me, Bend delivered high marks in all categories!

For years, I’ve heard of Bend, Oregon as a “Boulder-20-years-ago” type of place. An old college roommate even moved there, so I’ve been itching to check it out for quite some time. And you know, after visiting this bustling outdoor haven, I finally get it: Bend is pretty awesome. Not only is the microbrewery scene overflowing with delicious bubbly beverages, but the outdoor options are limitless. The tourism board was gracious enough to set us up with a multitude of activities, so in three days, we managed to rock climb, fat bike and downhill ski. Yeah, it’s that kinda town. 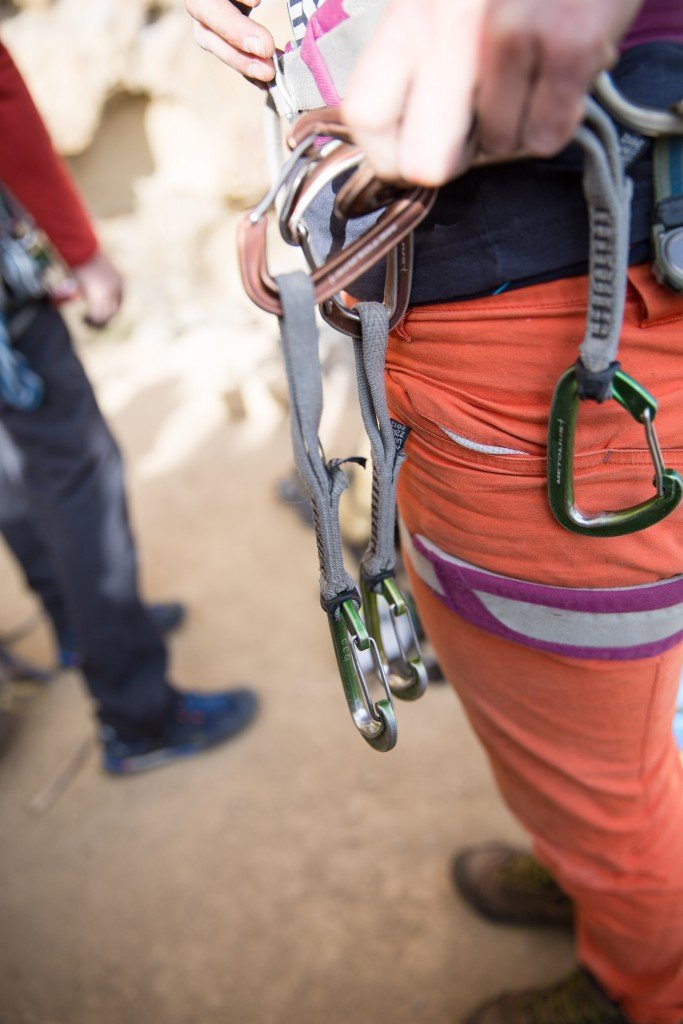 Our four-day bender began with skiing and concluded with fat biking, but just like any sandwich, the middle portion was a delightful surprise. Thanks to the combined talents of outdoor brand Five Ten and guiding company Chockstone Climbing Guides, our group was hooked up with a guided day of rock climbing at Smith Rock State Park.

You can see me climbing in here! (I swear, it switches to climbing halfway through.)

If you’re a climber, the name Smith Rock likely elicits feelings of excitement or anticipation. According to the climbers in our group, it’s a bit of a mecca in the climbing community. As for me? I was going for sheer survival! 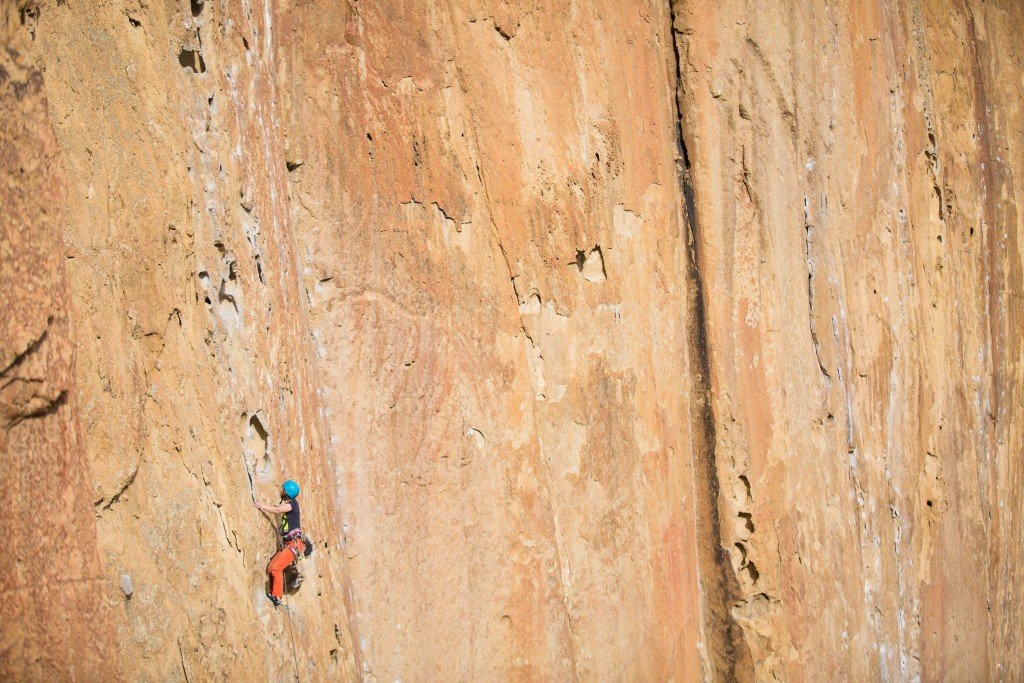 You see, I haven’t been on the end of a climbing rope in years. I dabbled in rock climbing in college and have occasionally tested the proverbial granite since then. But it’s never been my thing. If I’m going to climb something, I’d rather tackle a big peak via a mountaineering trip, yanno?

But on the flip side, it’s rock climbing. So many of my friends love the sport and I’ve started to think that maybe I didn’t give it a fair shot. I mean, how cool does it look?! Scaling a rock face like Spiderman; calling on your physical fortitude to hang onto tiny shards of sandstone; engaging your mental prowess to decode complicated maneuvers; dangling from a rope while soaking in the birds-eye view from above. What’s not to like about that?! 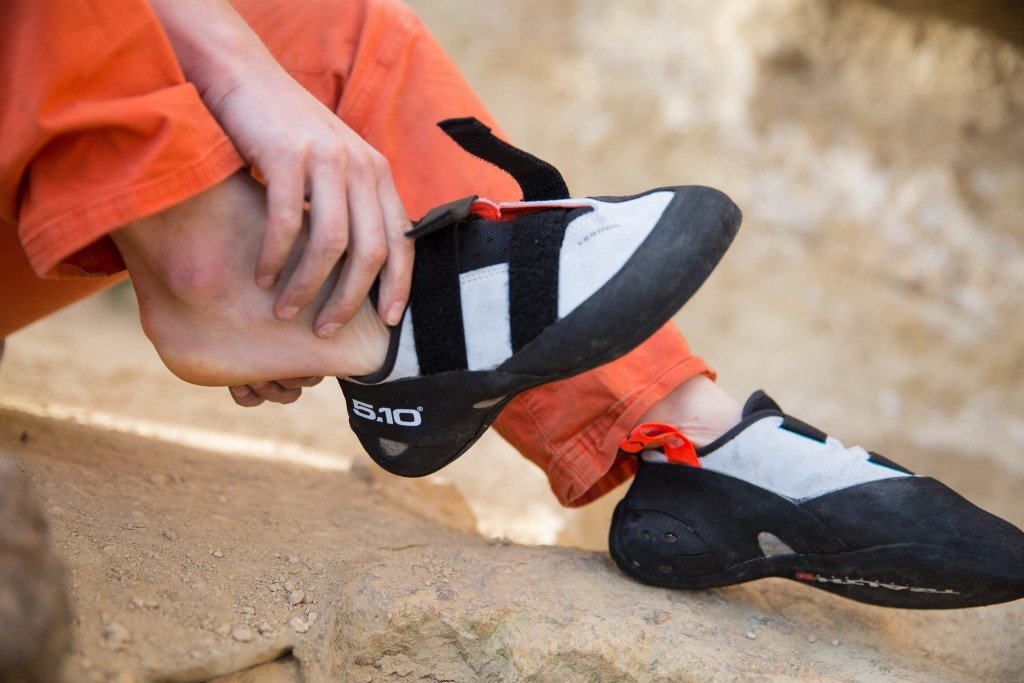 I took this one too!

Our morning dawned sunny and bright, ensuring our trip would actually happen. {Snow = no rock climbing for us!} We met our two guides from Chockstone who provided us with helmets and harness. Thanks to the folks at Five Ten, we didn’t need shoes; they hooked us UP! After gearing up accordingly, we hiked down to the climbing spot picked out by our guides.

Thanks to the mixed abilities in our group {read: everyone else knew how to climb; Heather did not}, we started out on an easier section of rock that had a handful of 5.6 and 5.7 routes. {Not familiar with climbing ratings?} I watched as Corey and Andrew climbed up rock faces like ninjas, barely stopping to breathe or adjust. In fact, I watched so long that I became quite comfortable in the sunshine! It was nice and warm, birds were circling, we had snacks; why did I need to climb anything? 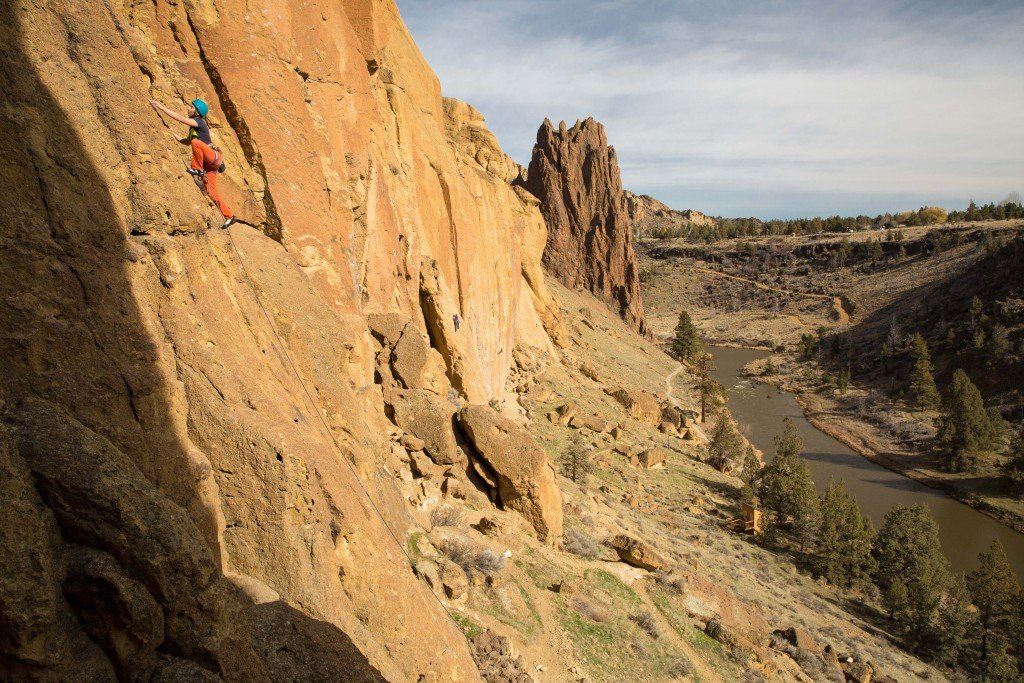 Of course, that didn’t last. I couldn’t travel all the way to Smith Rock and not try out this climbing thing! So, I smashed my feet into my new Five Ten Rogue shoes, plopped a helmet on my head, and tried to remember how to tie an eight knot. {Spoiler: I remembered!} Then, I looked at this ridiculous crack in front of me. Apparently I was supposed to climb it!

I was tackling Cinnamon Slab, a well-known and beginner-friendly 5.6 route. The slab of rock climbs the corner that separates the Dihedrals from another area, and a big crack runs right up the middle. The angle was very friendly for a beginner, so I was able to get moving almost instantly. 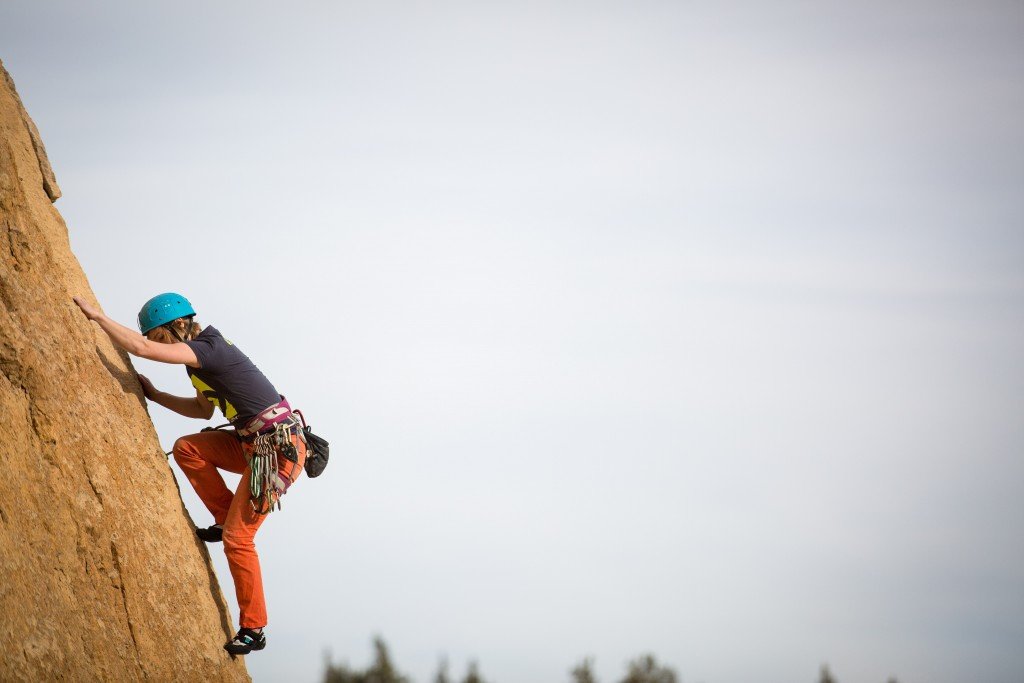 PC: Will Rochfort. All the rest are his photos!

I’ll cut to the chase and tell you that I conquered the beast! I conquered that slab o’ cinnamon! And the feeling of exhilaration at the top made the climb more than worth it. But more interesting to me, however, was how physically demanding rock climbing is on the body. I exercise, I workout, and I play outdoors a lot. But the type of physicality required by climbing was entirely different than anything I’m used to doing now.

Near as I can tell, climbing requires a definite efficiency in movement. I clearly did NOT have that kind of finesse as a I mashed my arm in the crack and crammed my toes on anything that looked relatively stable. But as I climbed higher, I quickly realized that my overambitious movements were unnecessarily exhausting. I had death-grips on holds when I only needed a firm handshake with the rock. And to me, the stone felt slippery which was totally mind boggling. {As it turns out, it kinda was. Our guide said this particular route is so popular that the rock has been smoothed by climbers’ hands and feet.} Needless to say, to my unconfident positioning, this 5.6 may as well have been a 5.14! 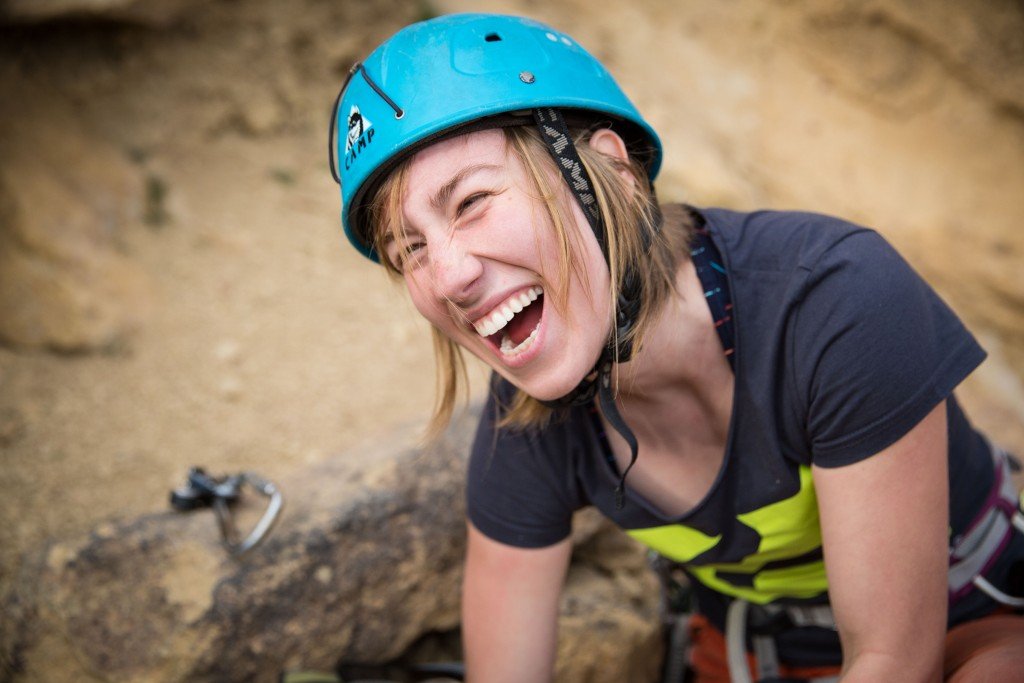 Corey was SO HAPPY to be climbing!

My musings aside, I had a blast climbing! After that route, I took a backseat and basked in the beauty of Smith Rock while allowing Corey to climb everything and anything. Climbing is her jam so I didn’t want to hold the group back by hanging out on my baby routes. Instead, we ventured over to classic climbs like 5 Gallon Buckets and Phone Call From Satan so she could stretch those climbing muscles. Honestly, it was so fun watching her enjoy a sport with so much passion!

Huge thanks to Central Oregon’s tourism board and Five Ten! They comped our travels, accommodations, adventures and food. As always, stories and opinions are my own!

The Best Powder Day of My Life: Crested Butte