Rough and Tumbling Creek Loop in the Buffalo Peaks Wilderness: Part I

**As always, all photos by Will at WMR Photography.**

Over Memorial Day weekend, Will and I decided to celebrate his migration to Colorado by doing a little backpacking. We both had tons of other stuff going on, so we decided not to spend the entire weekend out of service. Instead, we agreed that we wanted a mellow overnight trip so that we could head out on Saturday morning and be back by late Sunday night. Originally, we had planned on the Rawah Wilderness, but after analyzing maps (and realizing that Will’s waterproof shoes were still packed somewhere!), I made a final-minute, late-night decision that the north-facing wilderness of Rawah would have to wait until we at least had better footwear or the snow had melted. Instead, I lobbied for the Buffalo Peaks Wilderness, a frequently deserted area by Fairplay, Colorado. I knew this was one area that would be void of any people, even on Memorial Day Weekend!

We settled on the Rough and Tumbling Creek/Rich Creek loop, which is a fairly mellow 12-mile circle. The trailhead is located at roughly 10,000 feet, and the trail tops out just below 12,000, so there really isn’t too much gain to fret about. We read that most people hike the trail counter-clockwise (starting with Rich Creek), so we decided to do the opposite and tackle the trail in clockwise fashion. We were pleased to see only a few cars at the trailhead when we arrived early Saturday morning, and were even more psyched when they headed off to tackle the route counter clockwise. Turns out, we’d have an entire day of solitary hiking! 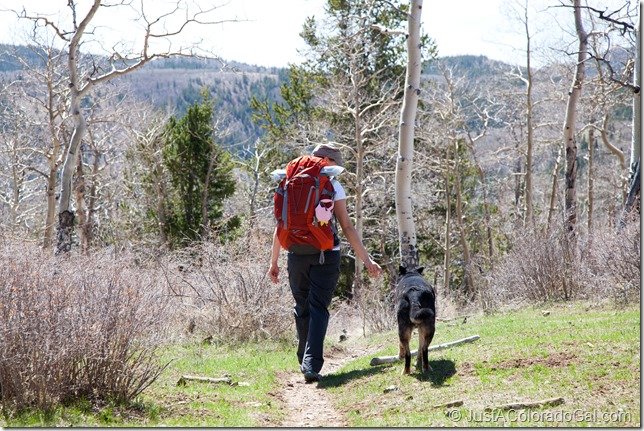 We had decided early on that we wanted to spend the night in Buffalo Meadows, a beautiful meadow located at the midway point around 12,000 feet. Since we only had six miles to cover on Saturday, we were able to amble and enjoy the scenery. My pack was fairly light (~25 lbs.), so the entire day was enjoyable. The first trip of the season always makes me smile, and I kept tilting my head towards the sunshine so that I could enjoy the warmth on my face. One of my all-time fave smells? That sweet scent that wafts through the mountain air when the sun heats up the tree sap. I love this smell and probably told Will this at least 50 times while hiking. Did I mention what I treat I am as a girlfriend?! 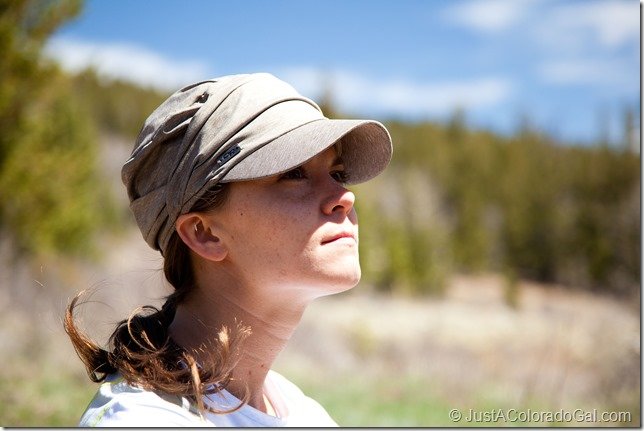 We continued on the very easy trail until we finally reached the point where the single track touched the stream. I had read that this route followed a creek the entire time (hence the name!), which is a key element for backpacking with Tals. However, the stream had been missing for the first couple of miles because of the direction we had chosen for the loop. I was incredibly happy to see the water again, and we decided to take a little snack break while Tals frolicked in the cool mountain stream. 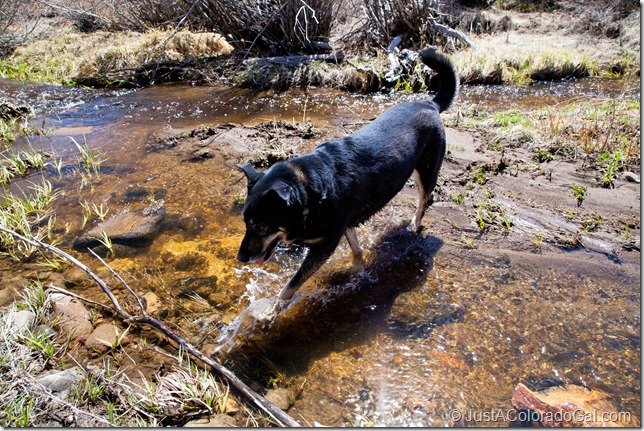 There is nothing like sunshine and wilderness to make my dog drunk on happiness! 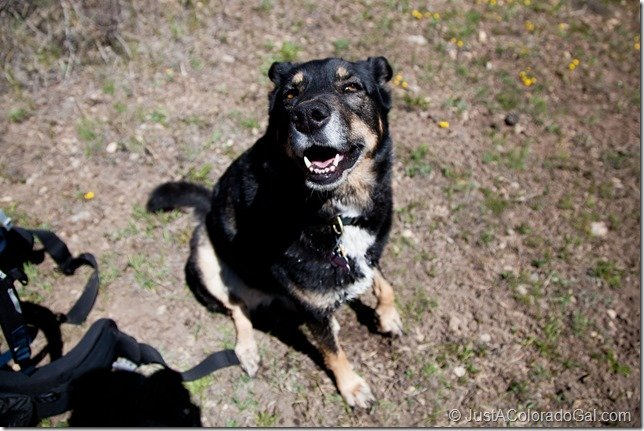 We spent a little more time enjoying the sun and relaxing by the creek, but we both realized we could easily fall asleep there in the sunshine. Instead of snoozing, we decided to continue on so that we could reach Buffalo Meadows early in the afternoon. If we had extra time, we could explore!

We tackled a few creek crossings as the trail continued to wind into the wilderness, but nothing major and all of them had solid bridges that Tally, Will and I could handle with ease. We did notice the water levels were pretty high, but that is to be expected this time of the year. However, we grew a little concerned when we encountered a larger river with some fairly high rapids. Like the others, there was a bridge to cross the river, but this time, the bridge was only a single log with a six inch width!

As soon as I saw the log, I knew Tally would never use it to cross the river. I mean, the darn thing was sketchy for Will and I since the weight of our backpacks kinda threw us around. We spent a few minutes trying to coax Tals onto the log, but she wasn’t having any of it. I was going to have to find another way to get my girl across the river!

Initially, we thought Will could carry her across, but that idea was quickly discarded when we realized how thin this log truly was. Tals kept crawling into the water, but she would panic when the current caught her and would U-turn and scramble right back out. After spending a ridiculous amount of time tromping up and down the length of the creek, I realized there was no better location to cross. I was going to have to get Tally comfortable in the river, and I realized that meant that I was going to get wet! 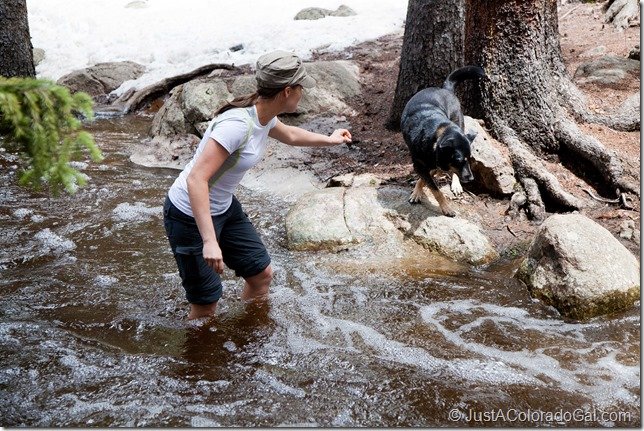 I threw my pack, socks and boots on the opposite of the river and rolled up my pant legs to try to keep them from getting wet. Normally, hopping into the stream wouldn’t be a big deal but this was the end of May—this water was entirely glacial runoff from the higher peaks! If I had to guess, I would say that the water temp was roughly 34 degrees and there was still large portions of ice sitting on the top of it in spots. When I climbed in, my toes went numb and I felt stabbing icicle pains in my calves. In short, that shit hurt! 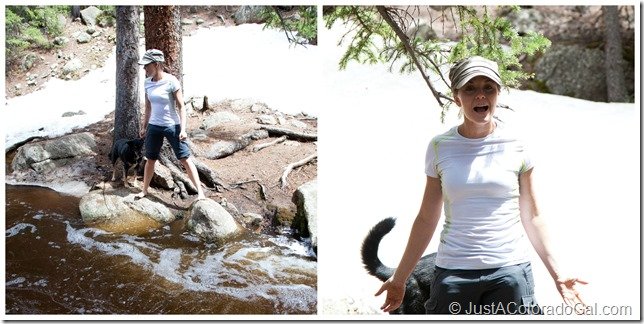 We’ve entitled the photo on the right “Heather’s WTF face.”

I quickly learned that I could only tolerate 4-5 minutes at a time in the water before the icy temps literally made me want to cry. Unfortunately, Tals still wasn’t having any of the crossing, and I couldn’t get her to swim into the deep end. I spent at least 10-15 minutes jumping in and out of the glacial water, and I was starting to think that she would never get across. I grew irritated and decided to hop back out and try to convince her, once again, to use the log. No dice. 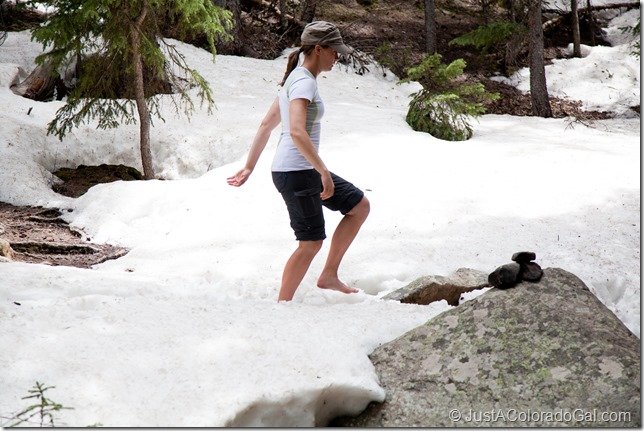 By this point, my feet were so numb that hiking barefoot through snow didn’t even make a difference. 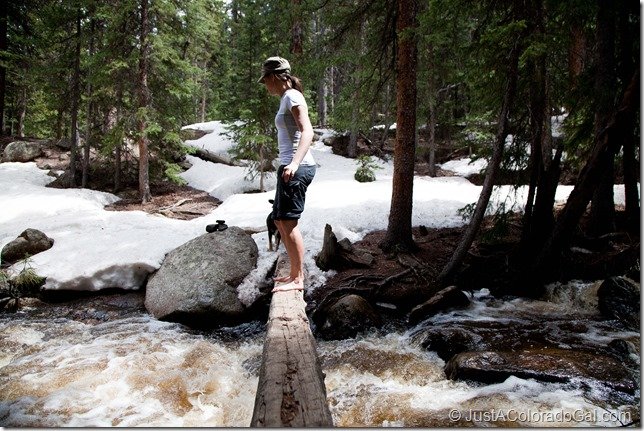 As irritated as I was, I also realized by the look on her furry face that she was really scared. Tals has never been much of a swimmer and although she knows how, she is not efficient or confident in the water. Usually, she has on her backpack with the handle on top, so I can just guide her across. However, because it was her first trip of the season and she is out of shape, I had decided to carry her food for her so she didn’t have to use her pack. Unfortunately, this also meant no handle for me to use! Go figure, huh?!

At this point, it had been about an hour and we were starting to think that maybe we would just camp by the river and retrace our course the following morning. I honestly didn’t think Tals was going to cross, and I sure didn’t want her to become more scared than she already was. We decided on one last ditch effort before we threw in the towel: Will stood in the middle of the creek on a log while I crawled (back) into the water from the opposite bank. This meant she literally only had to swim 3-4 feet at a time by herself, and I thought I would be able to reach her by the time the current started to freak her out. Luckily, the plan worked and Tals grew some serious guts! She swam her little awkward self across that river and scrambled up onto the bank with such confidence that I barely needed to help her. I have no idea where her sudden bout of self-assuredness came from, but I was so proud. It was like she looked and me and said, “Mom, I can do this—just give me one more try!” Love my furbaby!

To Be Continued Tomorrow!

Have you ever had any problems with your dog in the backcountry (or anywhere else)?

Rest Does a Body Good