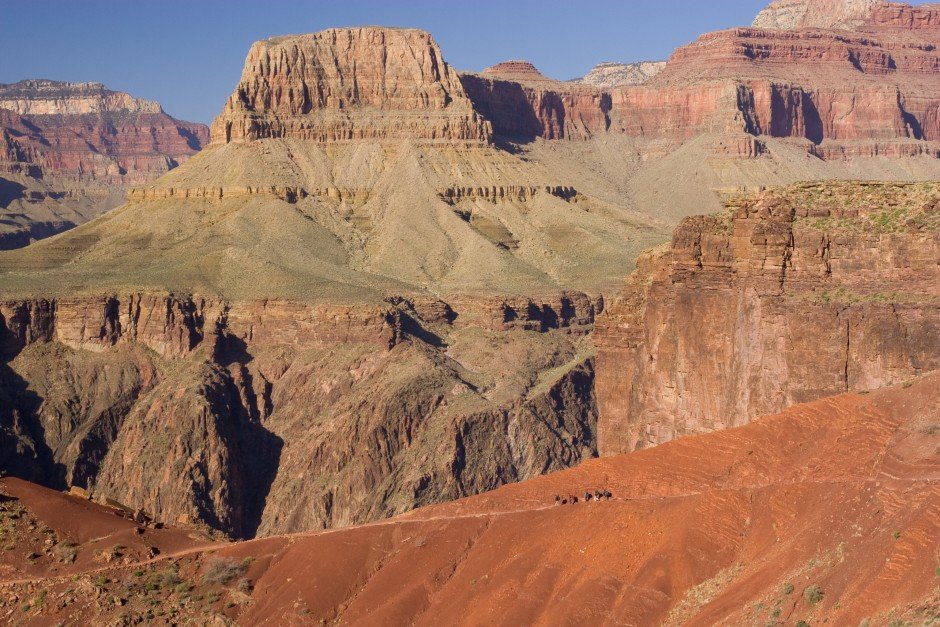 I first visited the Grand Canyon when I was a kid–maybe 6 or 7 years old. My sister and I met another kid named Ketchum and we became fast friends. We romped through our campground, causing havoc and playing in the dirt.

My next visit to the Grand Canyon was years later, when I was in college. Five of my closest guy friends and I voyaged to Lake Havasu for spring break, tacking on a side trip to see the big ditch. We were 20-years-old at the time which meant we were invincible {Or so we thought…} It was this trip where I found my first real-world, outdoors challenge: hiking the Rim-River-Rim in a day.

Signs covered the rim of the Grand Canyon, discouraging us for doing such a “dangerous” trek in one day. And while I put the word dangerous in quotes, I don’t mean it in a mocking tone–people die in the Grand Canyon. But, we were young and dumb and didn’t know any better. We wanted to see the roaring Colorado River and we didn’t have any permits to sleep in the canyon. If we were hiking down to the base, we were coming back up that same day. I vividly remember filling my bladder in the bathroom, and then coming out to meet up with my {now ex} boyfriend at the time. 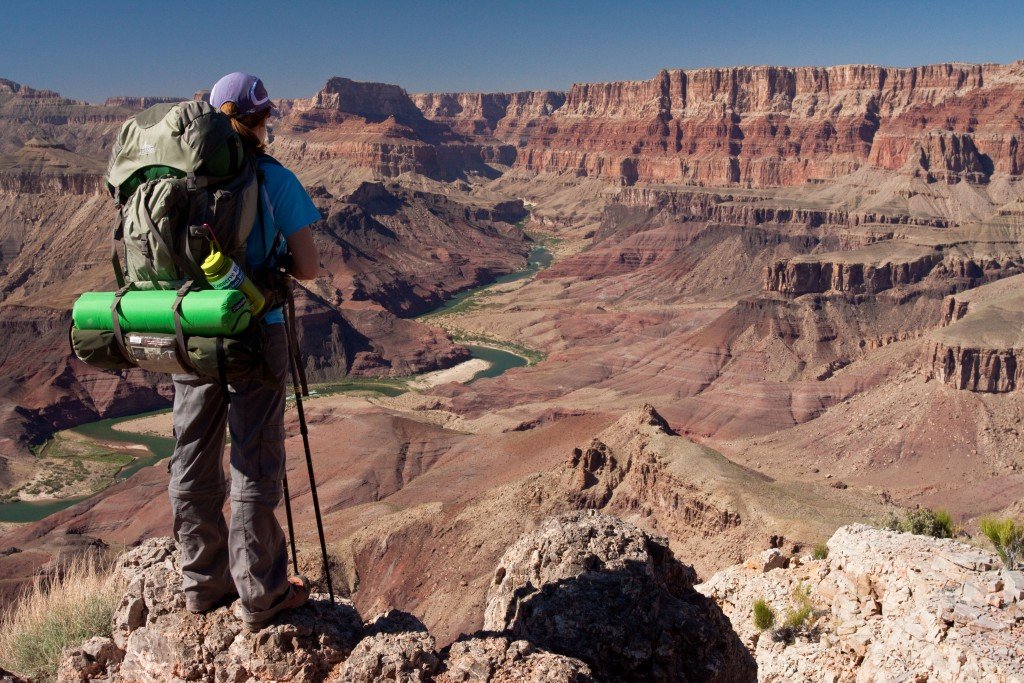 “The guys in the bathroom don’t think you’re going to make it,” he told me. “They’re rallying each other, saying that you’re the weakest link and we all have to make sure you get out in one piece.”

If you know me at all, you know that didn’t sit well. I had no idea how I’d survive the rim-river-rim hike, but I sure as hell would finish. I told myself I’d crawl out of the canyon if I had to; there was absolutely no way the boys were going to help me.

As it turned out, my sass and irritation fueled me for the entire day. I may have been hiking in sweatpants; I may have sunburned my face beyond recognition; I may have been vastly undertrained. But in the end, I was the survivor of our bedraggled group of underprepared college students. Not only did I make it to the river and back out again, but I finished ahead of every guy in the group. I helped one of our team by sharing my water when he ran out, and I even carried the backpack for another friend when he gassed out and began to struggle.

I last returned to the Grand Canyon in 2012 during the OmniTen trip where I met Will {<—-Catch the first photo of Will I ever snapped! I took a photo at dinner without ever thinking that we would be married years later!} Of course, this trip took place at Havasu Falls which is located in Havasu Canyon, a mini-offshoot of the Grand Canyon. While the trek in and out of the falls is a fair bit easier than the true Grand Canyon, I sandwich them all in the same category in my brain. A canyon is a canyon, amiright?!

In particular, I want the Rim-to-Rim-to-Rim {R2R2R} of the Grand Canyon.

If all goes as planned, I’ll be heading to Arizona to run the R2R2R during the first weekend of April. In case you’re unfamiliar, the R2R2R is a long trek where hikers typically start at the south rim, hike down the canyon, across the bottom, and back up the north rim. Once they reach the top, they turn around and head right back where they started. In the past, it was typically considered a multi-day journey for backpackers, but in recent years, it has become fairly popular among ultra runners as a single-day effort. 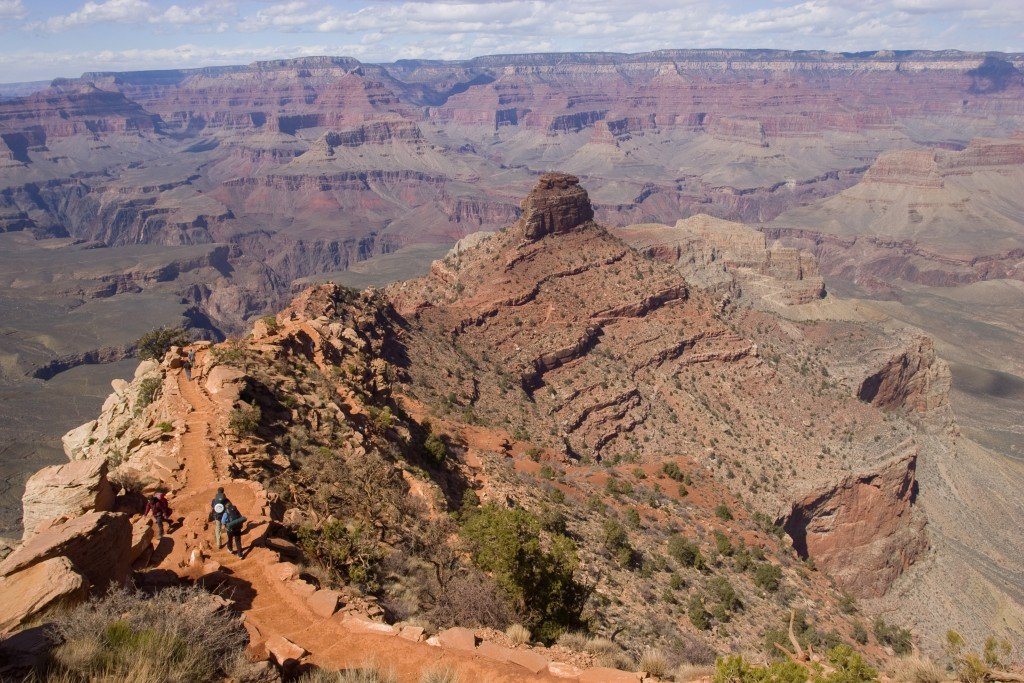 As for the stats? Check out these wicked numbers:

~45 miles of running {depending on which route you take}

Of course, there is no way I’m tackling this beast by myself. Will vetoes anything over a 10k, so I had to seek out a few people who thought this sounded like the right amount of type-2 fun. And with that, a Heather-Heidi-Heather sandwich was formed!

I first met Heidi back in 2012 on the same OmniTen trip. Since then, she and I have become close friends. We ran Antelope Canyon together last year and are already registered for Bryce Canyon in June. She even flew all the way out to Colorado in February for my bachelorette party. But the best part about Heidi is that she always says yes to anything I suggest! She is far more organized than me and tends to be more cautious {as opposed to my impetuous leaping-and-thinking-later nature.} I figure those are great qualities to have around on a trip like this!

Heather and I haven’t actually met in real life– the R2R2R will be our first face-to-face encounter. We’ve communicated tons over the past few years, always chatting about our latest outdoor pursuits and conquests. She is even one of my snowshoe testers for the magazine! At one point, she briefly stated, “I want IN!” when I mentioned my hypothetical-yet-future plans for the R2R2R. Not sure if she realized I recorded her name in blood, but regardless, she sealed the deal. Besides, what better way to get to know someone than by suffering together over 45 miles and ~16 hours of trail time?! 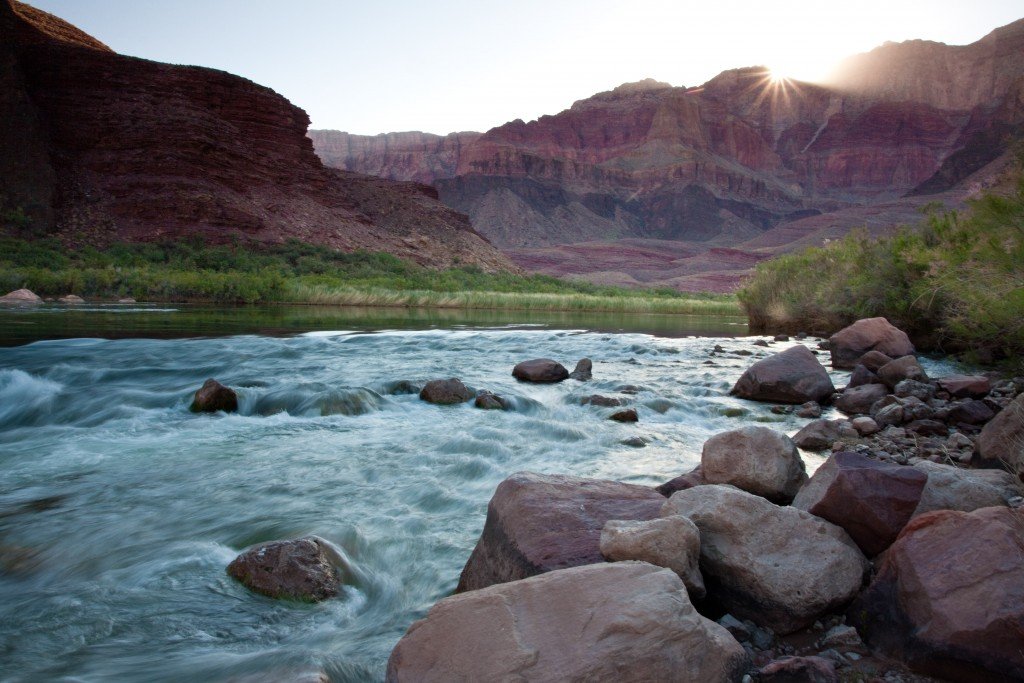 So, there you have it. Truth be told, I’m terrified. Scared sh*tless. This is so much bigger than anything I’ve ever done, but that in itself doesn’t scare me. Rather, it’s the lack of support out there that makes me nervous. I’ve spent enough time in the Grand Canyon to fully appreciate how wild it is– and how dangerous it can be. We’ll be monitoring the water pumps to ensure that they are turned on when we run. We’re eyeballing early April because it is late enough to be ice-free but early enough to avoid the deadly hot temperatures that creep in later in the season. Of course, Mother Nature is a fickle beast so who knows what will happen. The best we can do is plan and hope for the best.

My official training kicked off this week and I’ll be the first to admit: I’m without a clue. Time on my feet is great and all, but I’m going to have to invent new and unique ways to build some climbing legs—and some descending muscles. That’s a whole lotta up-and-down to survive!

But here is my question for y’all: how interested in this are you? I know there are quite a few blogs out there that recap their weekly training cycles. I’ll be the first to admit that I’ve never gone down that road, but for some reason, I’m considering it for this adventure. Maybe accountability? Maybe so someone can {virtually} smack me when I’m doing something wrong?! No idea. Would you be interested in any of my training details? Which ones?

Gear of the Year: Outdoors {Giveaway}

Five Reasons to Visit Iceland in 2016