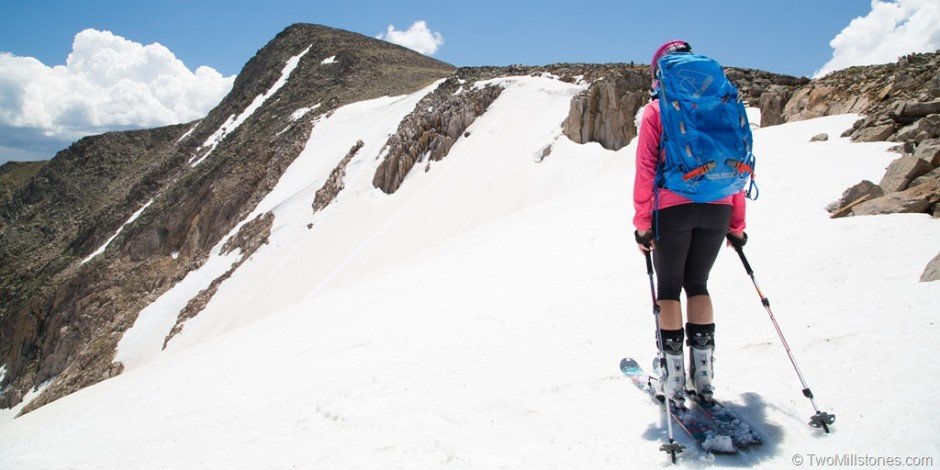 A few weeks ago, Will asked me if I wanted to head out for a hike over the Independence Day weekend. We were stuck in the city due to work obligations, so I readily agreed. A Saturday morning hike sounded fantastic! I asked him a few questions but didn’t really pay too much attention to the details {typical!}. I do remember him using the phrases easy hike and skiing, but that’s about it. I had agreed to a little backcountry skiing, but let the matter drop. Will is the ultimate planner and it was nice to just let him take the reigns.

{Lesson learned. I will pay attention to the planning process after this in order to prepare for my own ass kicking!}

Friday night arrived and instead of watching fireworks, we were packing up our backpacks in the basement. It was just a day hike, so the clothing was minimal. However, there was apparently a glacier somewhere that Will wanted to ski: Tyndall Glacier. What did this mean? We were hiking our backcountry ski gear up the mountain! 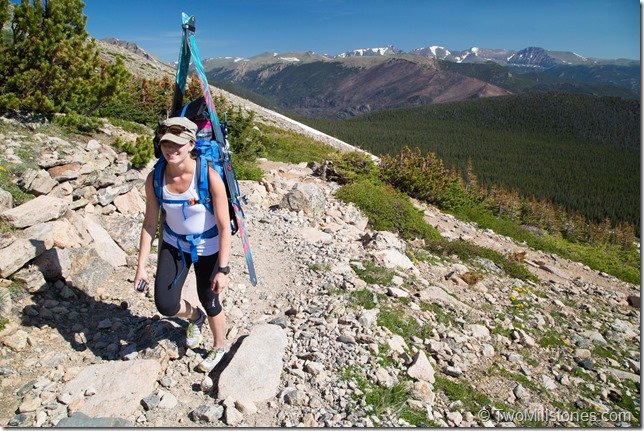 This smile was forced. I was in the pain cave!

Located in Rocky Mountain National Park, Tyndall Glacier is a year-round snowfield that lies against the ridge between Flattop Mountain and Hallett Peak. I rarely venture into the park since I can’t bring Tally, so I was eager to check out a new area. We parked our car at the Bear Lake Trailhead around 7am on Saturday morning. Immediately, I noticed that there were a ton of people – definitely a holiday weekend!

We both managed to fit our ski boots in our packs with the rest of our extra clothing and rigged an A-frame with our skis. All things considered, it was a relatively comfortable {yet heavy} setup. 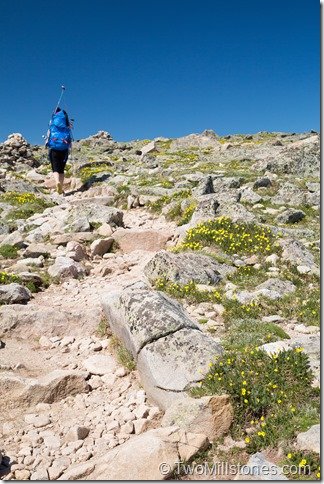 We chose to follow the Flattop Mountain trail up to the glacier. This is also the trail that leads to Hallett Peak, a very popular hike. Because of this, tons of people were on the trail and you can only imagine the looks, stares, questions and smiles we received in regards to our skis. After all, it was a bright and sunny day and I was hiking in a tank top….with skis on my back!

The first mile clicked off easily but then the elevation gain started to kick in. I was struggling with the pack I was using since it was awkwardly digging into my lower spine; I felt like I had an abnormally placed hunchback. I had no idea why it was doing that, but it was causing me a ridiculous amount of pain. However, we eventually stopped halfway up the hike, quickly found the cause of the problem, and I was able to continue a lot more comfortably.

We trucked along, soaking in the views in an effort to ignore the weight on my shoulders. When I had seen the four mile one-way tally, I had mistakenly assumed it would be a relatively easy hike. However, the elevation gain was legit and we clocked 3,000 feet of gain in just four miles.

We finally reached the top of Flattop and caught our first glimpse of Tyndall Glacier. Fortunately, there was still plenty of snow! 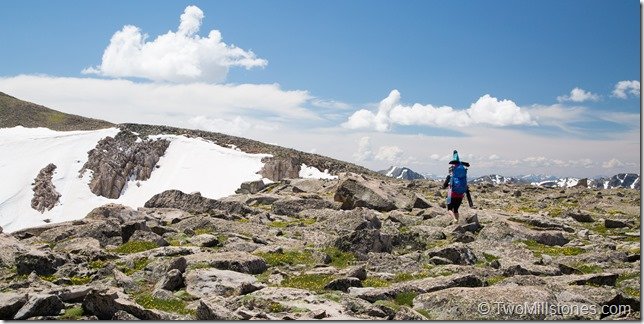 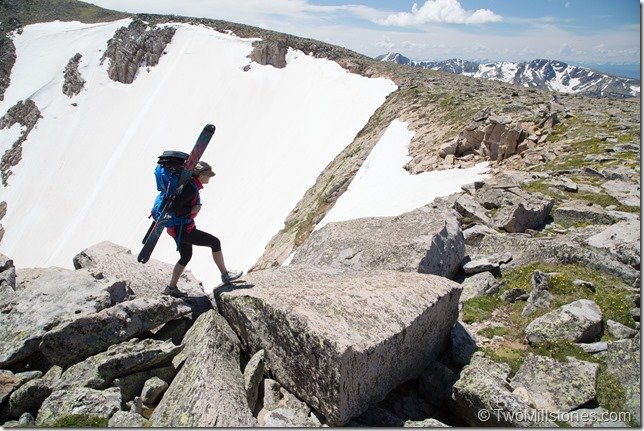 {I may or may not have threatened a tantrum if we hiked up there with our skis and couldn’t find a single glacier to ski.}

After an absurdly long lunch break where we snoozed in the sun while watching fat marmots play, we ambled up to the glacier to do a little scouting. At first, we couldn’t find a good entrance point. However, we walked around the far side as if we were hiking to Hallett and eventually find a perfect place to drop in. 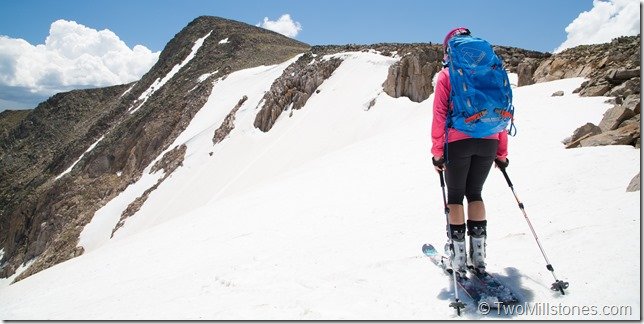 At some point, the dozens of people on the ridge noticed our skis and we became quite the spectacle! I was trying to ignore the growing audience by focusing on my skis and boots, but it made me slightly uncomfortable. I understood the oddity of what we were doing, but I was nervous that their peering eyes would make me screw up. This glacier was steep! There were a half dozen guys sitting on the rocks directly behind me, and I assured them I wouldn’t be doing anything worth watching. “I promise guys, I’m not that cool! No flips or tricks, just going to ski!” They told me they were from out of town so any skiing in July was awesome to see – and could they take my photo?!

Agh! I eventually shut them all out by shoving my ski helmet on my head and focusing on Will. I had thrown on a lightweight Adidas shell, but vetoed any gloves, goggles or pants; I was rocking some capris with ski boots and sunglasses for an uber wicked tan!

{For the record, you should see my calves. Worst tan line ever!}

According to beta, skiers right of the glacier is the steepest with a narrow couloir that runs about 50 degrees. I looked at it and it was definitely doable—albeit wicked steep! After Will’s three knee surgeries, we’re hoping he can avoid a fourth, so we moved down towards the center of the glacier and picked our lines. Based on the beta we had read prior to the trip, I think I skied a line that was around 45 degrees.

Naturally, Will wanted to grab some photos of me while skiing, so he traversed the mountain a bit to get into position. Once he was ready, I launched! 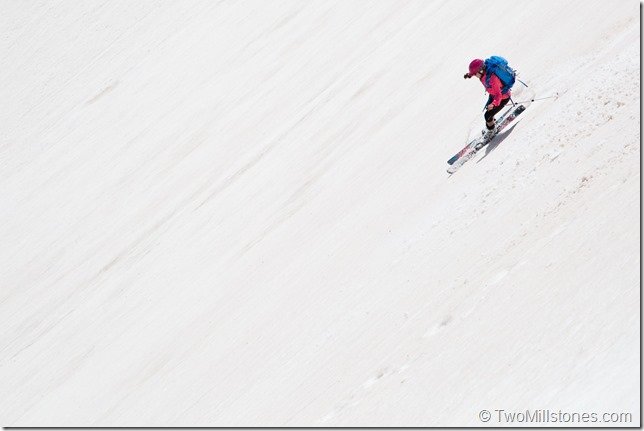 It took two turns before I got a good feel for the snow. It was incredibly soft and a bit slushy, and I even managed to spray a whole lotta crystals into my ski boots! Regardless, it was an absolute blast and so worth the climb! 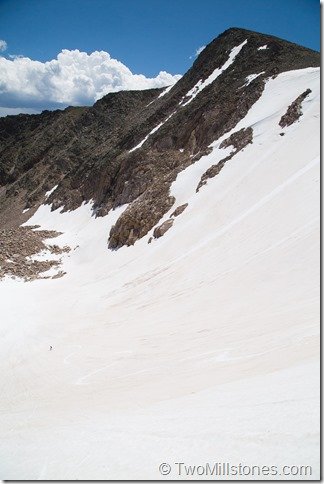 See me way down at the bottom?

Will zipped down after me with a huge grin spread across his face. We considered a second line and began boot packing back up the glacier to obtain the ridge and nab a second run. However, we changed our minds after 10 minutes of climbing: the glacier was steep and slippery and without crampons, neither of us were comfortable. 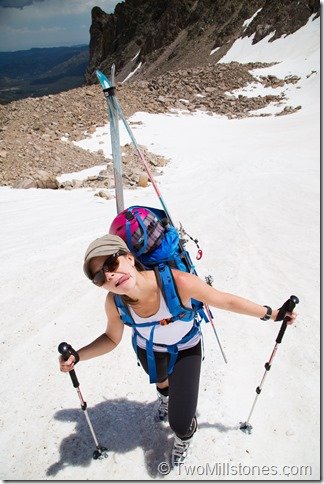 This about sums it up.

Instead, we headed skiers left across the snow until we caught up with the talus field. 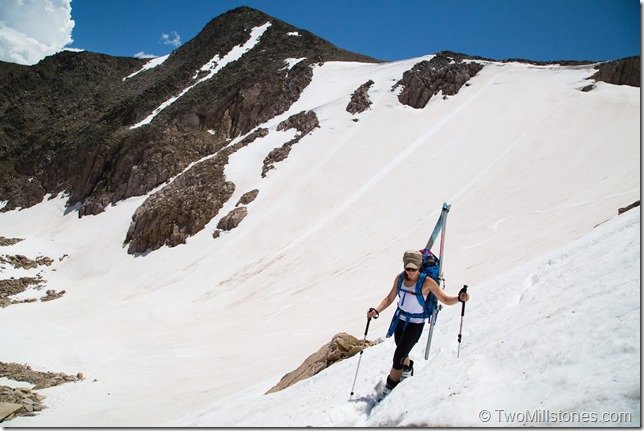 You can see our lines on the glacier behind me!

From there, we spent a frustrating 30 minutes climbing over boulders and skirting around loose debris. Usually, I am sure footed in boulder fields but I had the wrong shoes on and was not used to carrying the skis. As a result, I kept smacking my ski tips against rocks and getting caught in between boulders. In short, I was a flipping nightmare! 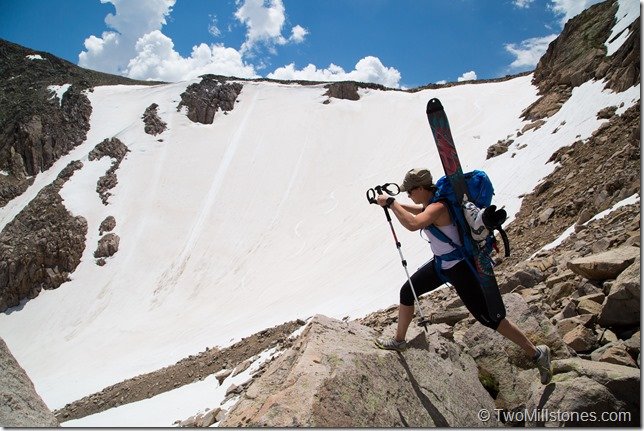 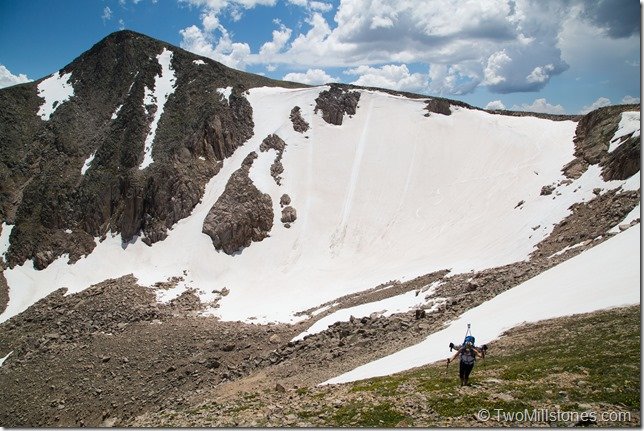 That’s Tyndall behind me and Hallett Peak on the left. You can still see our lines! 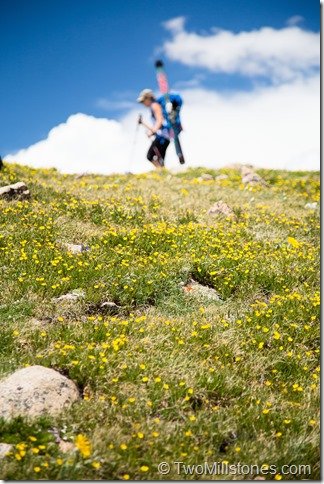 We finally obtained the ridge just in time to see the black clouds begin rolling in; no more skiing for us! We hightailed down the mountain, knowing that the summit was the last place to be in a lightning storm. Fortunately, we managed to zip below tree line before the storm arrived. Unfortunately, we still had two miles left when the hail began smashing into our bodies! 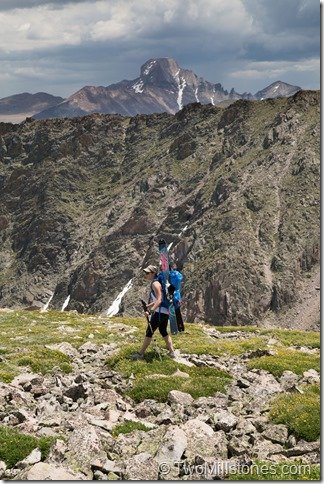 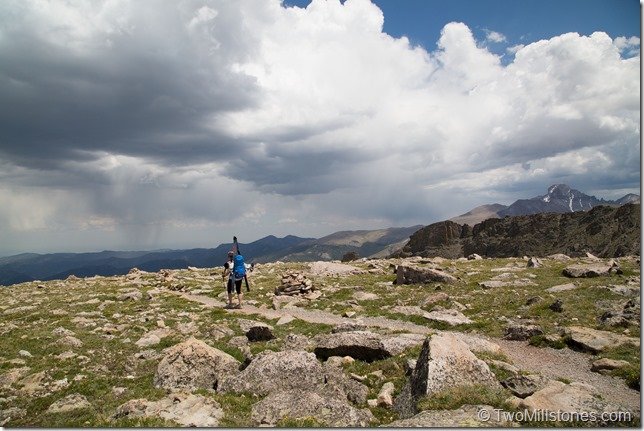 Seriously, that storm was a beast.

At that point, we knew we were safe and close to the car so other than the painful stings of the ice and the chilly wetness from the rain, we were alright. Per usual, the storm lasted for 20 minutes—long enough to soak us!!—before sun came out and dried us off. 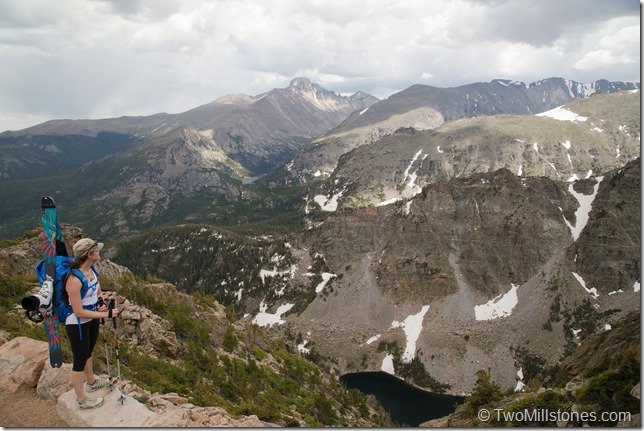 Final Stats for the Adventure:

Elevation Gain: ~3,500 feet, including the climb back up from the base of Tyndall

Want to see the rest of Will’s photos from the adventure? He uploaded the entire album to his website; go check it out and let me know which one is your favorite!