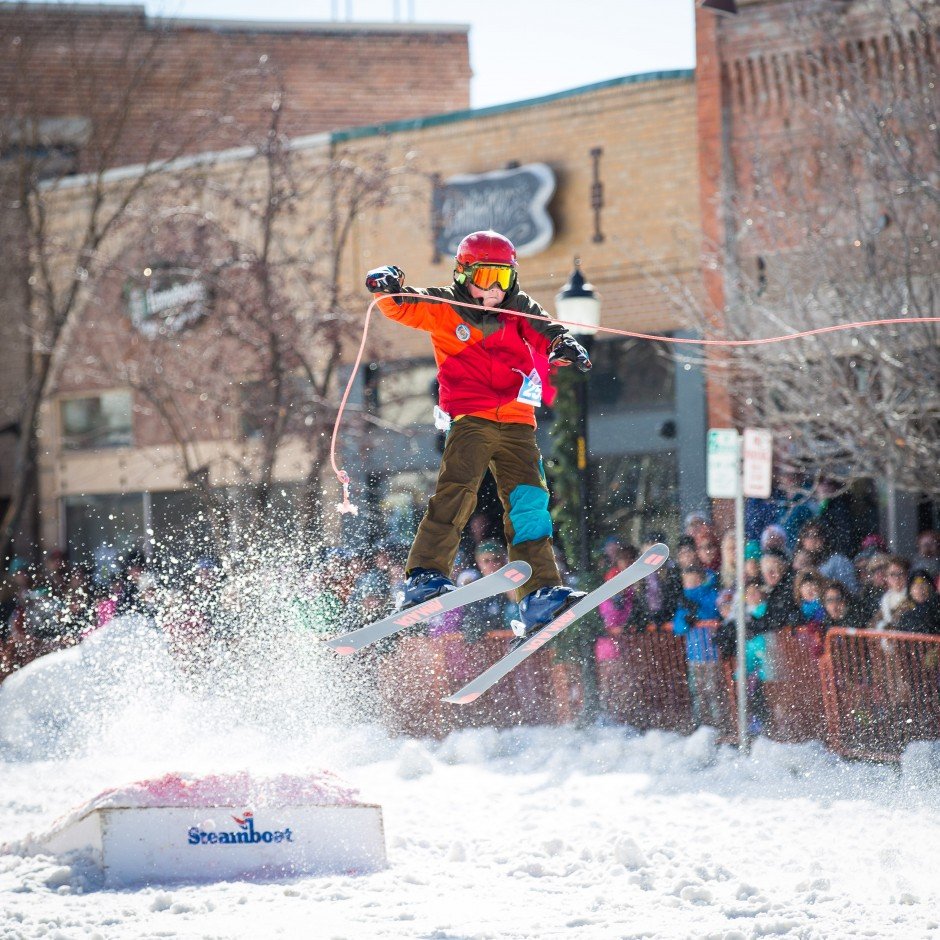 …but I’m sure going to try!

Steamboat Springs was celebrating their 102nd Winter Carnival and obviously, I needed to take my loaner Toyota Highlander on an adventure. We packed up our ski gear and some snacks and hit the road! 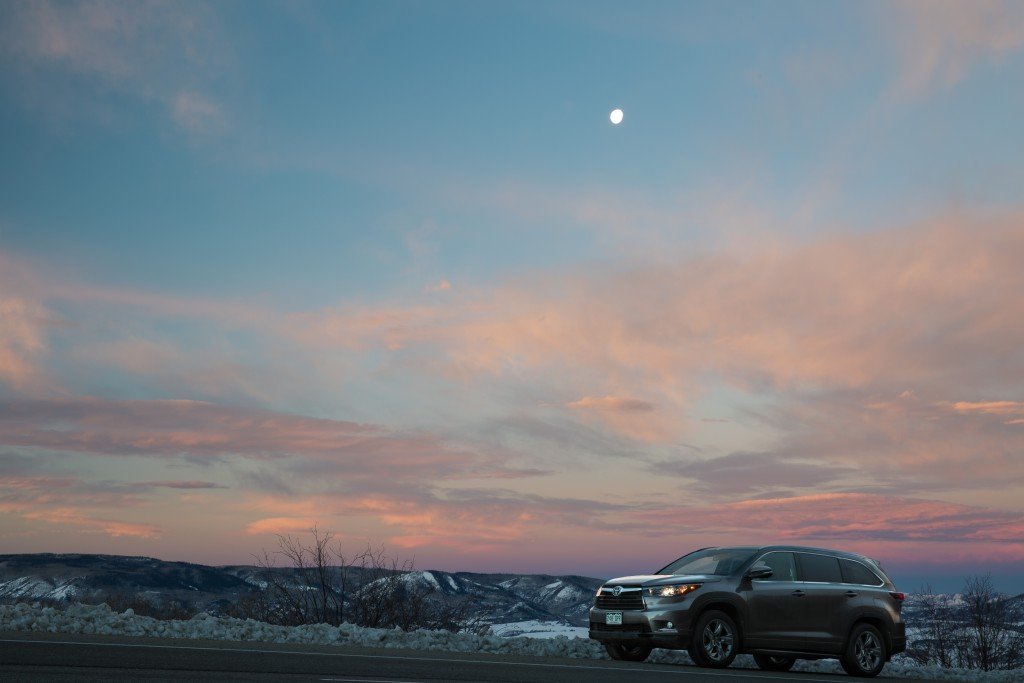 The Steamboat Springs Winter Carnival is an iconic event in this Western mountain town and after witnessing it, I can see why. Historically speaking, the carnival came to be in 1914 as a means to break up the frigid and long winters that happen up in Routt County. As a result, it’s almost like liability waivers are thrown out the window in favor of sheer entertainment! And, I’m not the only one that considers this Winter Carnival a must-see; in 2012, National Geographic listed it as one of the ten best winter carnivals in the world!

Will and I forewent the Carnival events on Friday and Saturday morning and opted for skiing instead. Sadly, Steamboat isn’t getting much of their iconic Champagne Powder, but we still had some fun. Side note: I quickly learned that skiing the day after a long run is a poor life choice! I can’t even begin to count the number of times Will found me laying on the side of a ski run, staring at the sky while I tried to give my legs a quick reprieve! 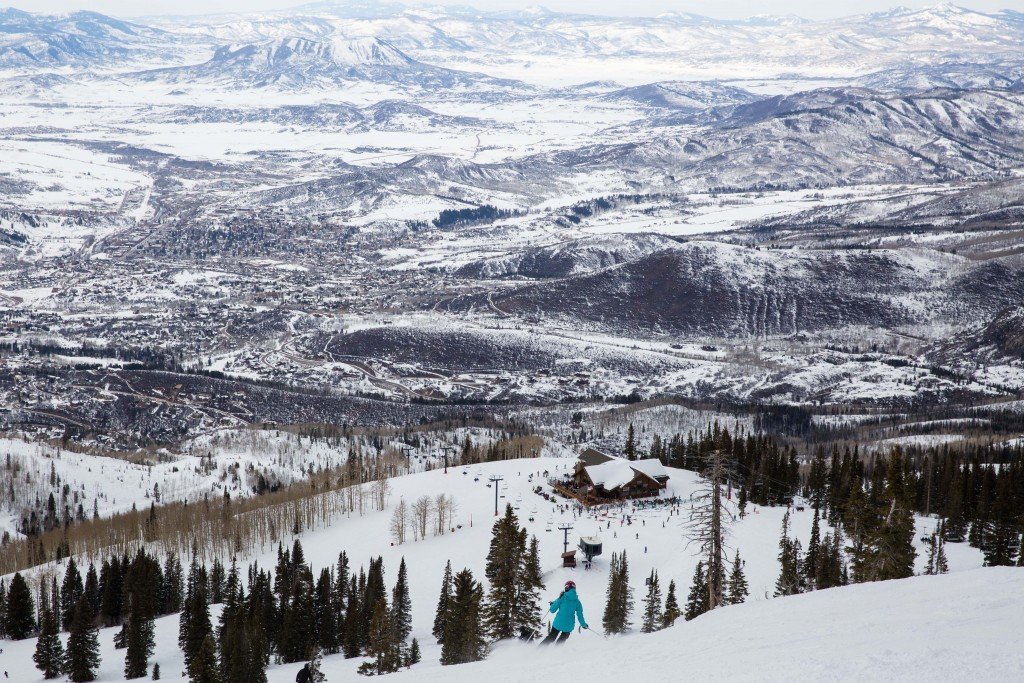 Saturday night was the main event and we headed over to Howelsen Hill for the Night Extravaganza. We had no idea what to expect, but a friend told us that there would be lots of fire and explosions. Seriously? Count me in!

The Night Extravaganza began with a bang–quite literally–when the Lighted Man made an appearance on the ski hill. He appeared at the top of the mountain, completely covered in lights that brightly shone through the darkness. That in itself was entertaining, but I almost lost it when I realized he was wearing a backpack full of fireworks that were going off as he skied down the hillside! The Lighted Man was literally a human firework machine! 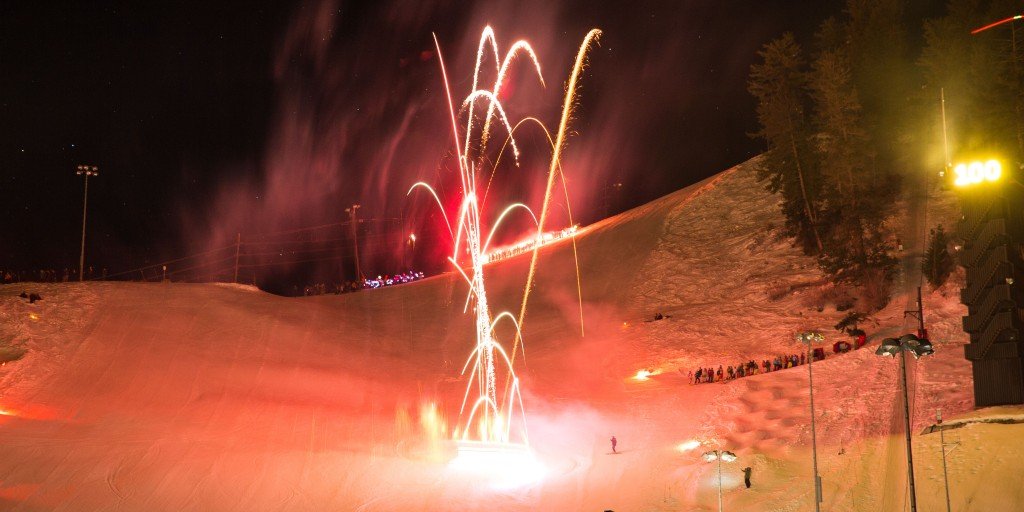 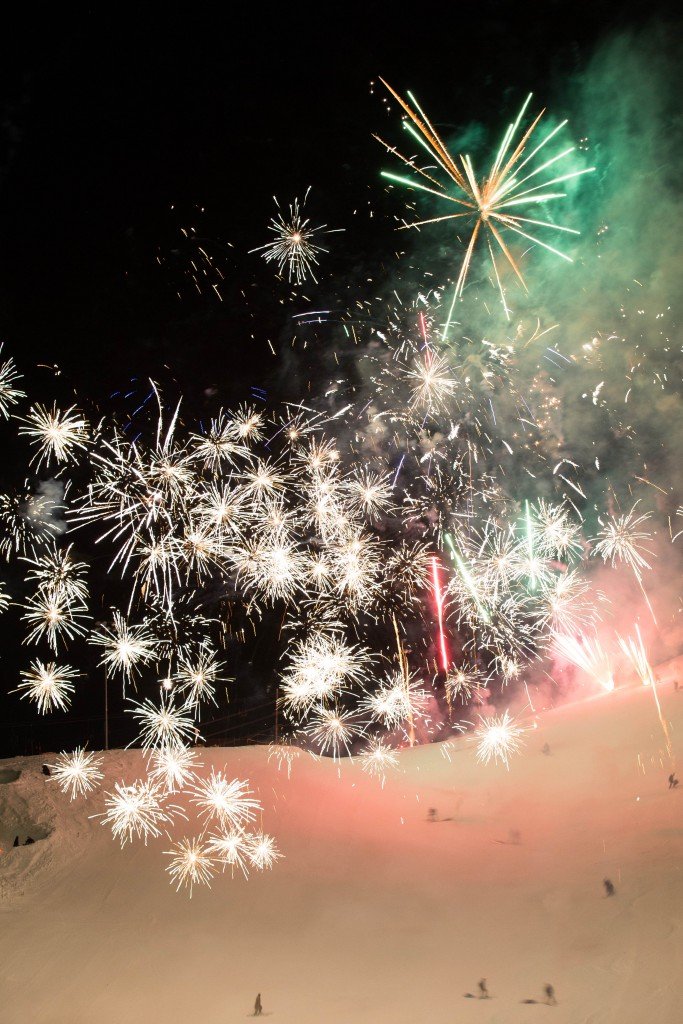 After that spectacle, we weren’t sure anything could top it but the pyrotechnics continued to impress. Various ski teams from the Winter Sports Club skied down the mountain with torches, illuminating the hillside with neon patterns. 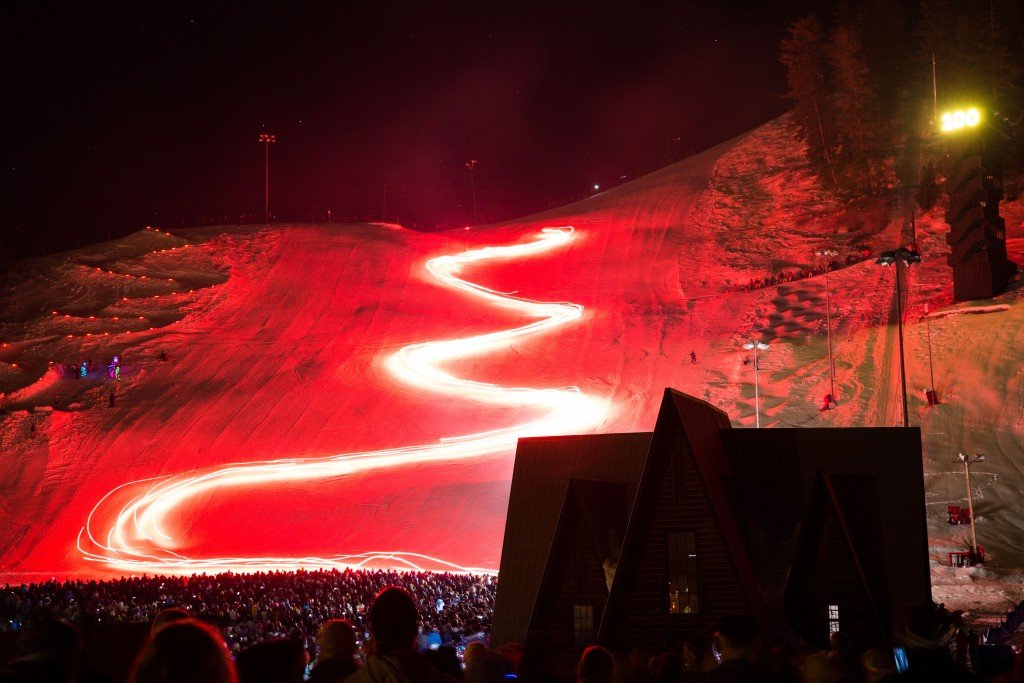 But then, things got crazy! Howelsen is known for its ski jumps and skiers use them to train for the Olympics. Not only were people launching off these jumps into the inky darkness, but they decided to add a little more danger with some fire: these kids were jumping through a flaming hoop as they launched off the ramp! 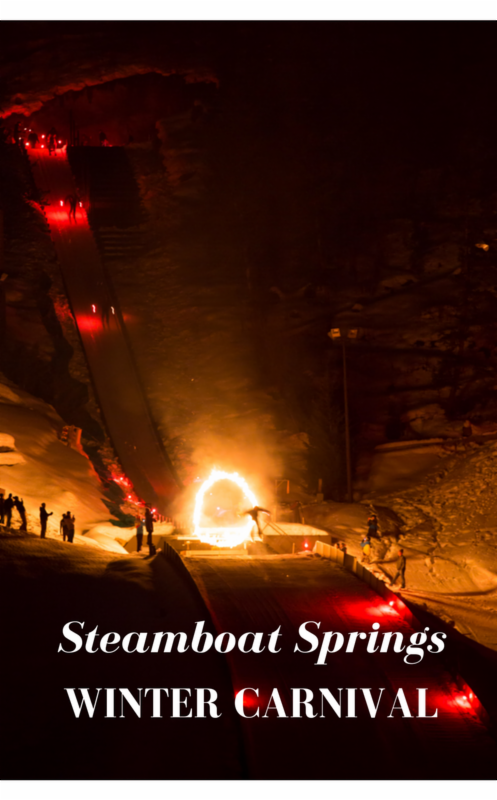 Finally, to top that, a ski patrol guy came down the ramp, pulling an emergency rescue sled that was essentially filled with kerosene and lit on fire. This man pulled his fiery sled through a hoop of fire, and then launched off the jump before safely landing. 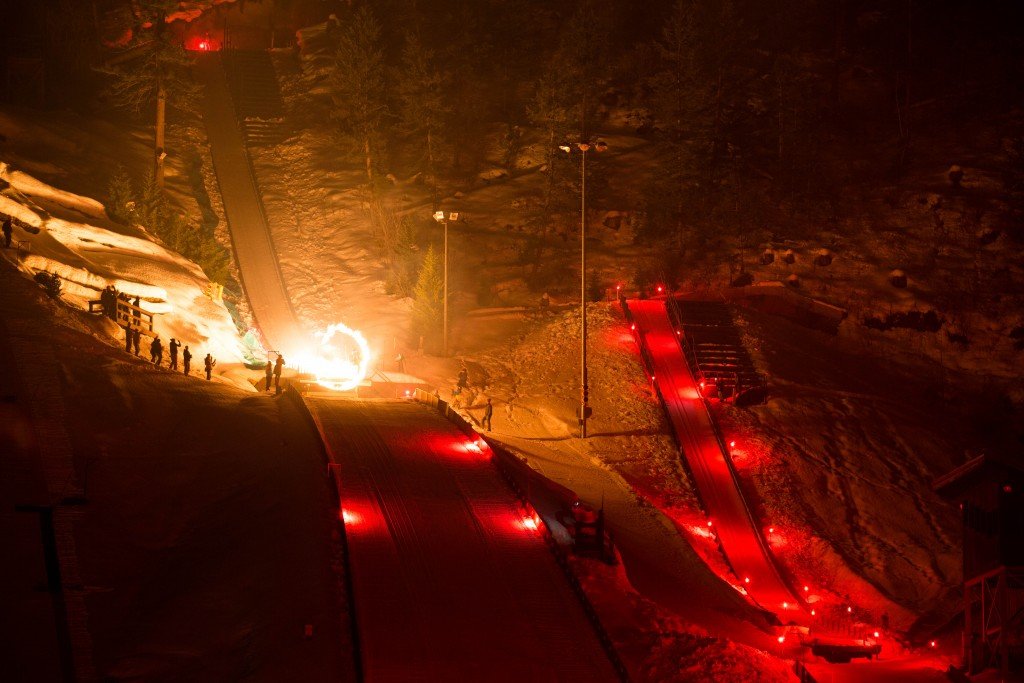 Y’all, I couldn’t even handle these massive jumps without breaking my face, and these guys were navigating them while lit on fire. It was madness!

Will and I laughed all the way home, confidently claiming that Sunday’s street events could never top the spectacle we had just witnessed at Howelsen. And while the street events were decidedly different–and there was no fire!!–they were equally entertaining. 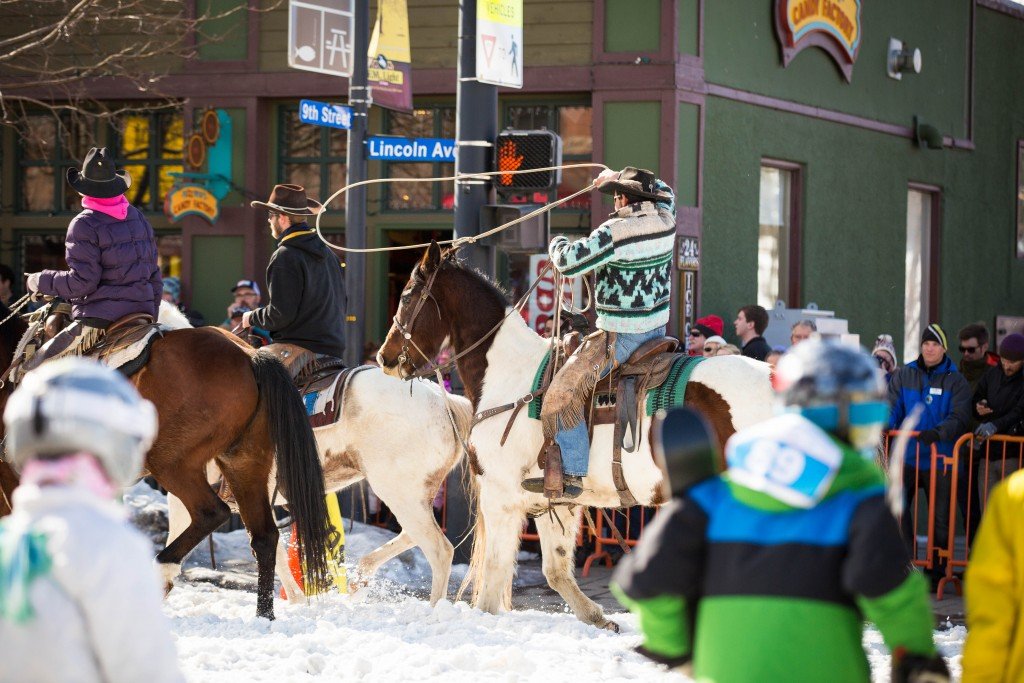 In order to accommodate all of Sunday’s events, the City of Steamboat carts in dump trucks full of snow from the mountains. Before the events begin, they drop all of the snow on Lincoln Ave, the main drag through town. They cover the pavement so Lincoln is essentially one long, flat ski run.

The first event we watched was the Donkey Jump. Kids ages 8-14 strapped on their skis and grabbed a rope that was tied to a horseback rider. When the announcer said go, the horseback rider would take off sprinting down the street, pulling the kid behind him. They would line up so that the kiddo hit the ramp that was carefully placed in the middle of the road, launching into the air. The winning skier was the person who managed to cover the most distance with his jump. {For the record, the winning kid launched almost 40 feet!} 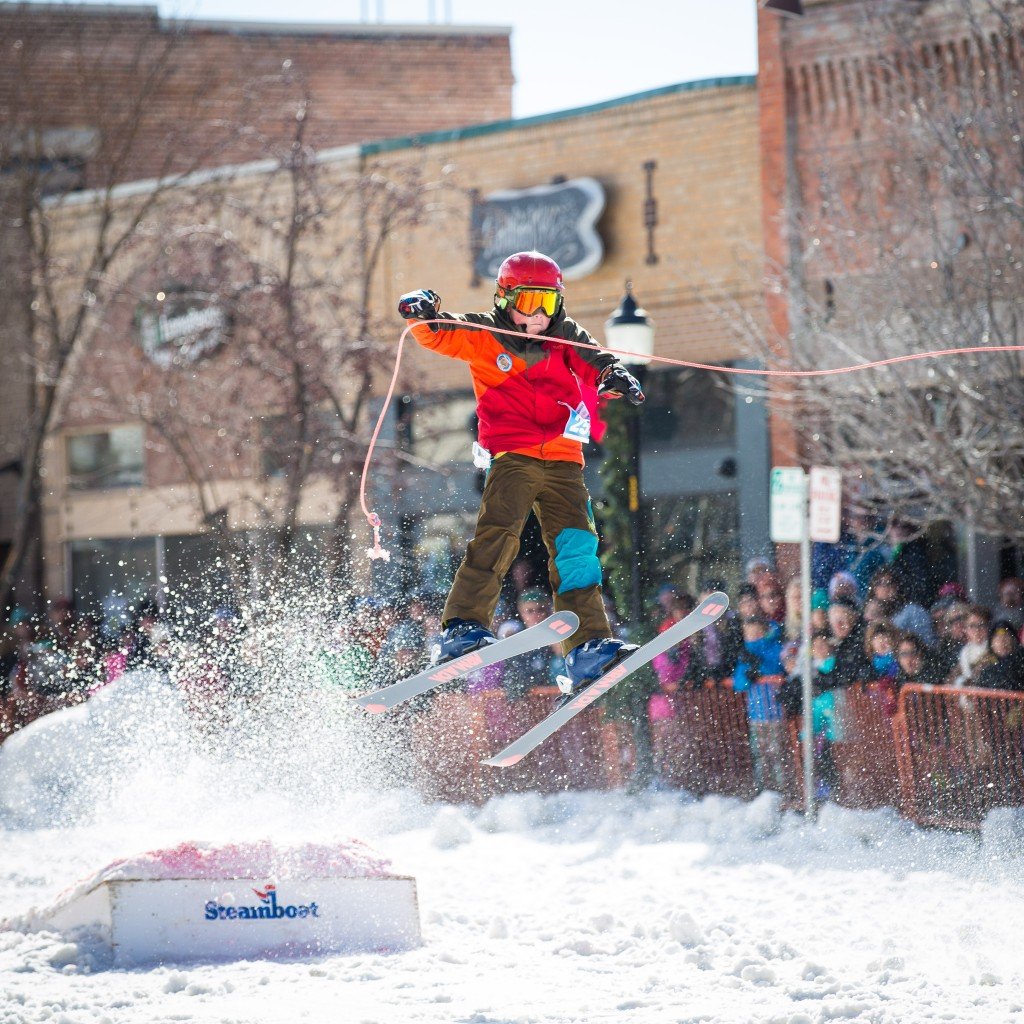 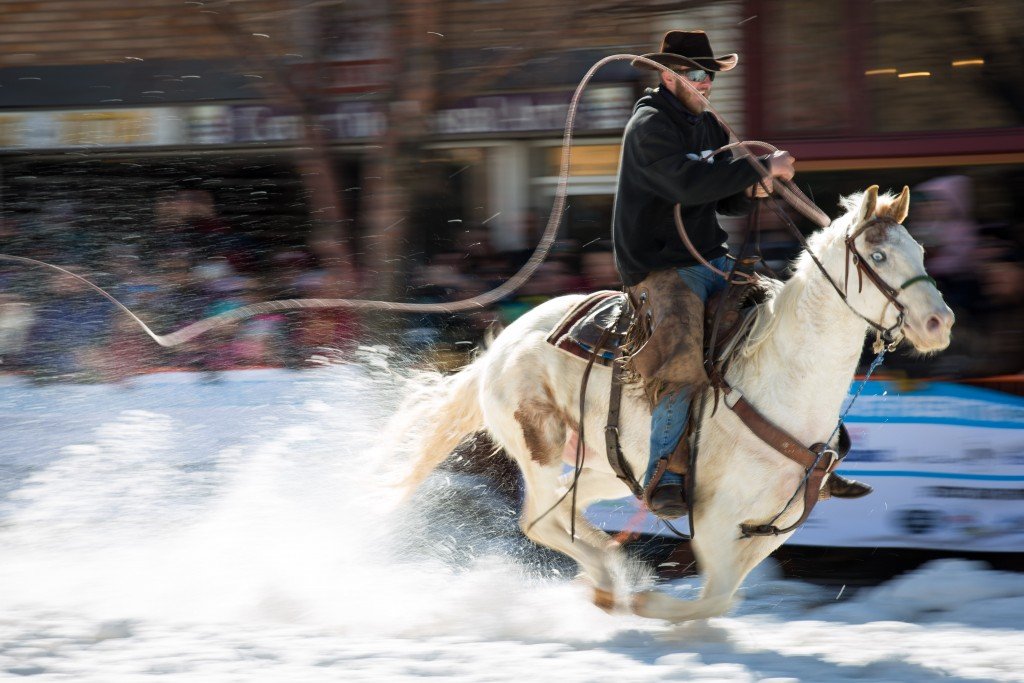 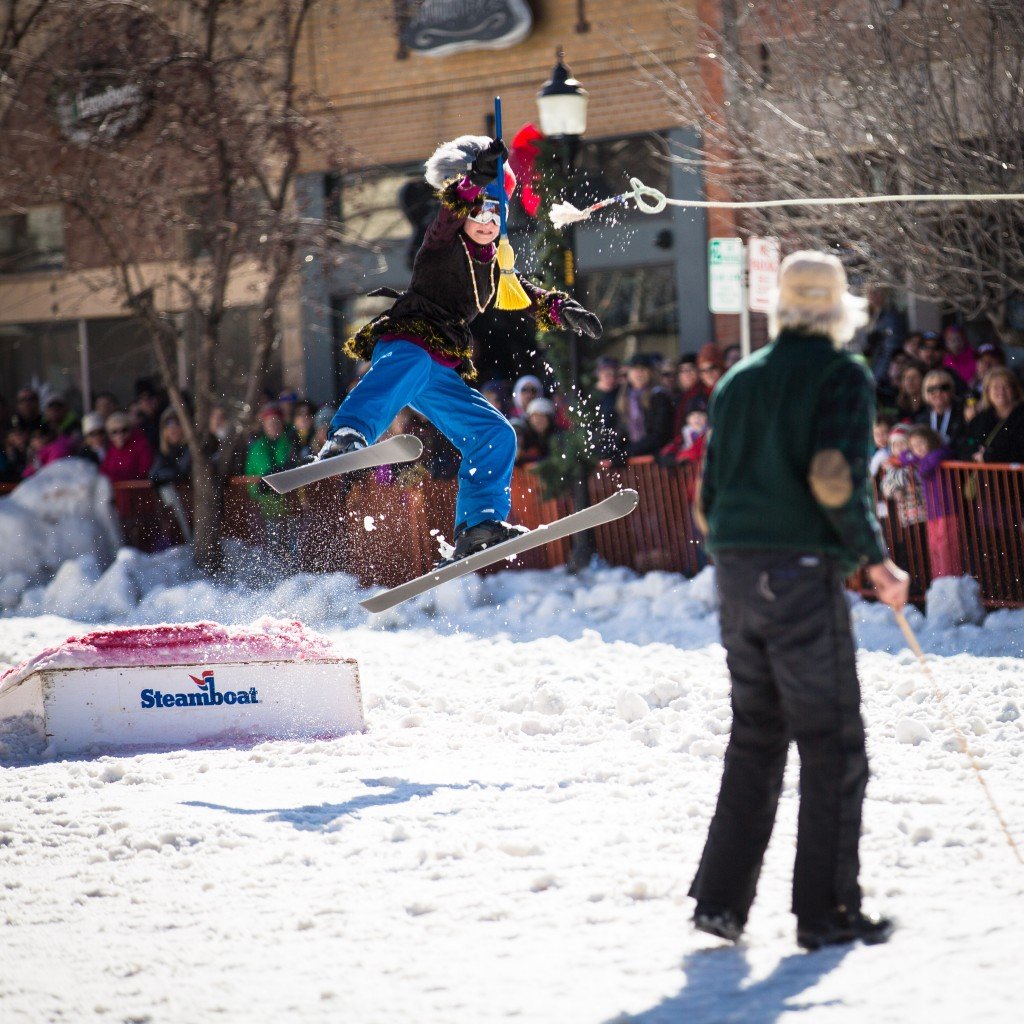 Finally, we closed out our trip by watching the infamous Shovel Race. For adults only, I had heard about this event and labeled it as pure carnage. Again, horses were involved only this time, adults supplied their own shovels so that horses could pull them down the street. Fastest time won and it was hysterical to see the different techniques used by the adults.

Some chose to straddle the shovel and lift their feet in the air: 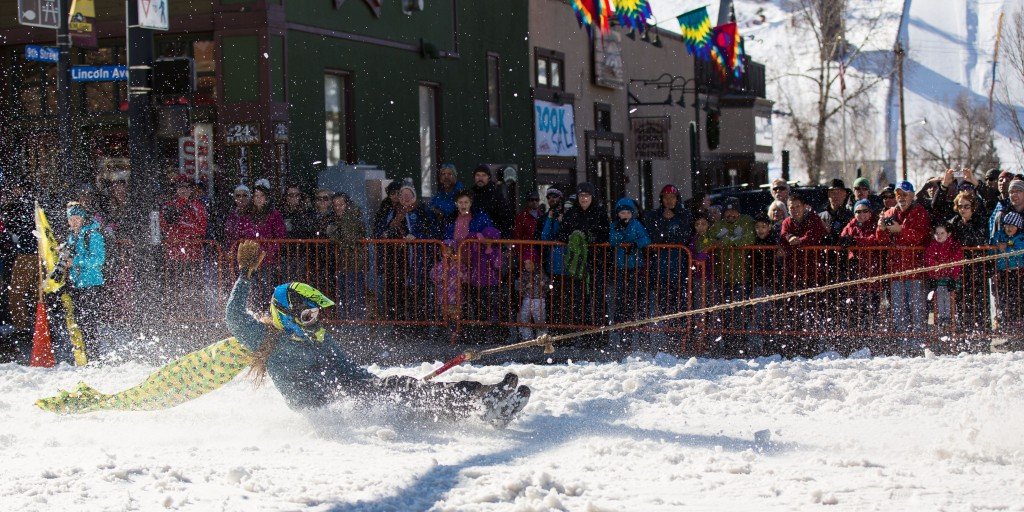 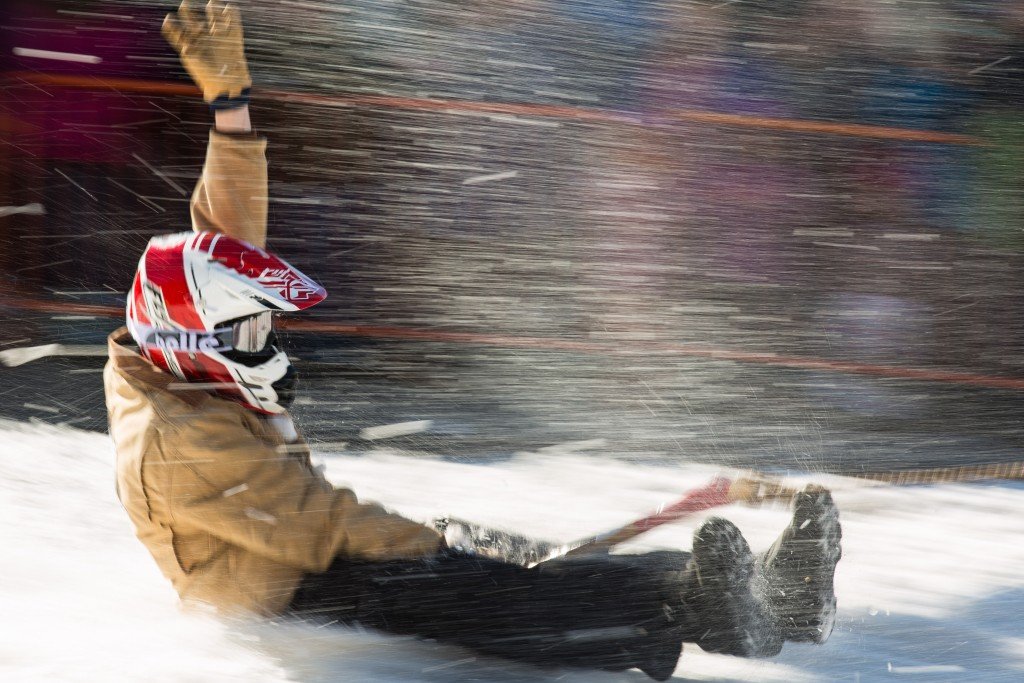 While others simply chose to hang on for dear life. 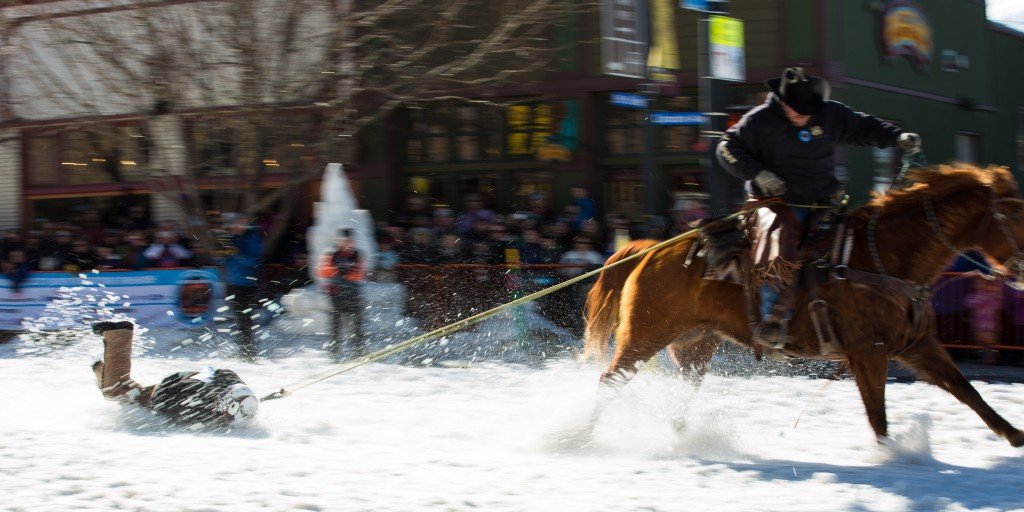 Regardless, it was absolutely hysterical and I kept inwardly cringing as I watched them fly by. Did some of these guys not want to have babies?! The winner was a 40-something woman who covered the distance in 8.2 seconds!

The entire Steamboat Springs Winter Carnival concluded with a parade–complete with a marching band on skis!–but Will and I missed it since we needed to head back to the city. Usually, tourist events like this don’t live up to their hype but Steamboat’s Winter Carnival was different. Not only does it appeal to out-of-towners like us, but locals enjoy it as well. Plus, for me, it encouraged that wild west feeling that Steamboat is known for. After all, there aren’t too many towns that will light people on fire for the sake of entertainment!

Have you ever been to a winter carnival?