I don’t frequently write about CrossFit. Instead, I tend to focus more on my outdoor pursuits like trail running and backpacking. That said, it doesn’t mean I don’t love the sport! I simply realize that those of you who don’t CrossFit really don’t care, and I respect that.

BUT GUYS! I competed in my first-ever CrossFit comp, so how can I NOT share that?!

{I promise I’ll try to make this as simple and easy to follow for those of you non-CrossFitters!}

I’m pretty sure it all began with an innocent Facebook post: Who wants to compete in The Schoolyard Showdown?! I watched online as my fellow gym members grouped themselves into teams of four, excited to participate in the upcoming competition. Truthfully, I wouldn’t have joined in if my coaches Jess and Marilyn hadn’t encouraged me. Regardless, I found myself on a team with Marilyn, Brian and Chris {all three of which are my coaches at Big Horn CrossFit!}

Saturday rolled around and I was kinda terrified. The work load wasn’t awful: there were two main workouts along with a third “floater” workout that you could complete whenever you wanted. The final workout {or WOD} was a tug-of-war battle. Not bad, right?

However, the first workout was my nightmare. 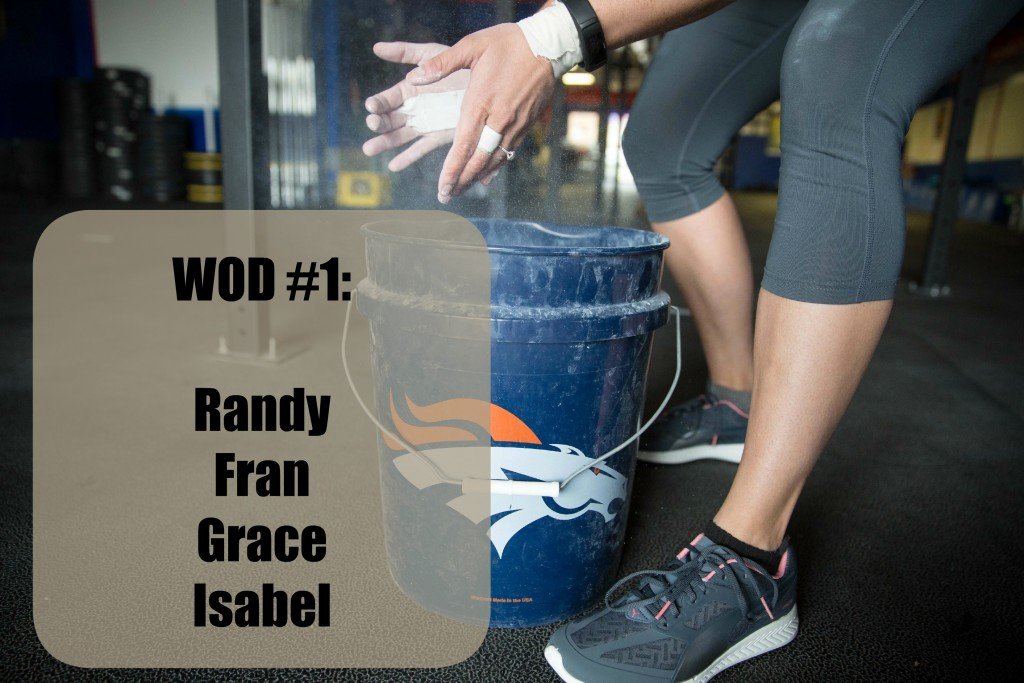 Each of those four names is an iconic CrossFit workout. Per the competition guidelines, each one of the team members had to choose one workout, and there was an 18 minute time cap to finish all four. Marilyn went first with Randy {75 snatches at 55 lbs for women/75 lbs for men} and did amazing! While 55 lbs isn’t super heavy, 75 snatches is a lot. It’s one of those workouts where you just have to put your head down and GO! 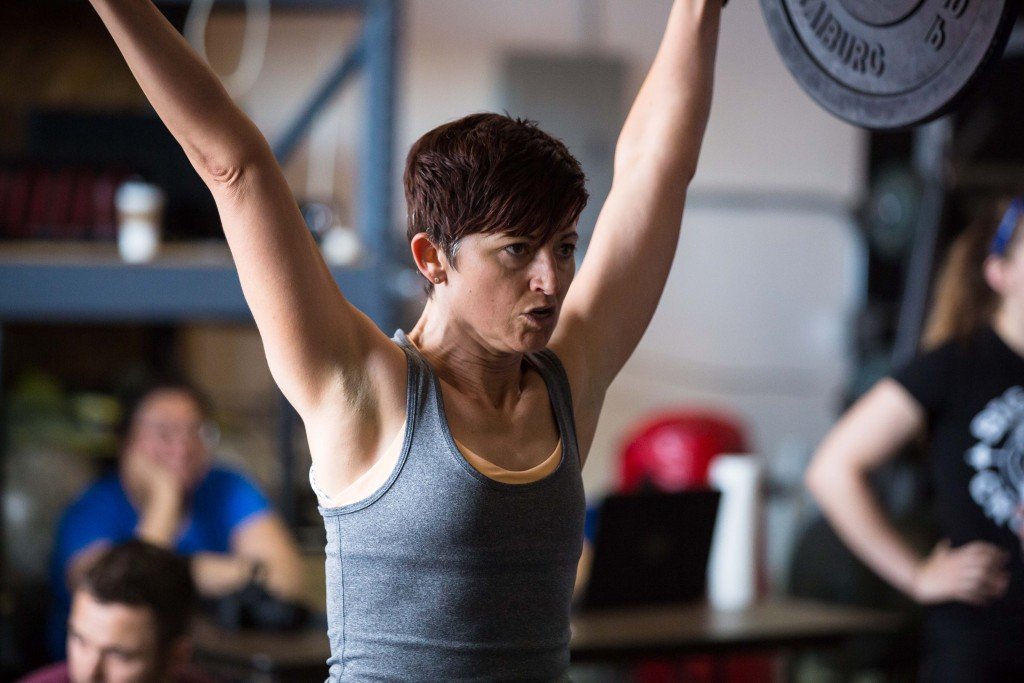 Chris went next with Fran, my most-hated workout in all of CrossFit. It’s notorious for making people miserable which is ironic since it only consists of two movements: thrusters and pull-ups. The rep scheme is 21-15-9, meaning participants do 21 thrusters (65# for women/95# for men), 21 pull-ups, then 15 thrusters, 15 pull-ups, and finally 9 thrusters and then 9 pull-ups. He annihilated this workout and set a new PR for himself; I think he did it in 2:49. {Yes, seriously!} 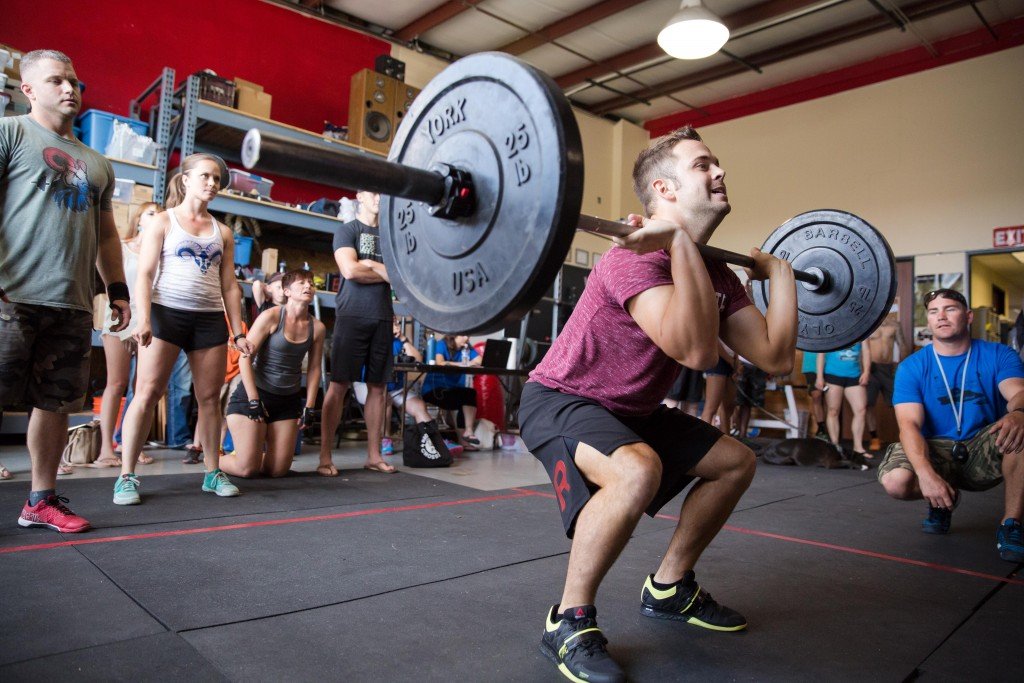 My turn came next with Grace, and I was terrified! Grace is a simple workout: 30 clean and jerks {95# for women/135# for men} but I’ve never done it “Rx’d”, or at the recommended weight. In the past, I’d always had to scale the workout by using a lighter weight. In fact, two months prior to the comp, I did Grace at 75#….not even close to 95#! 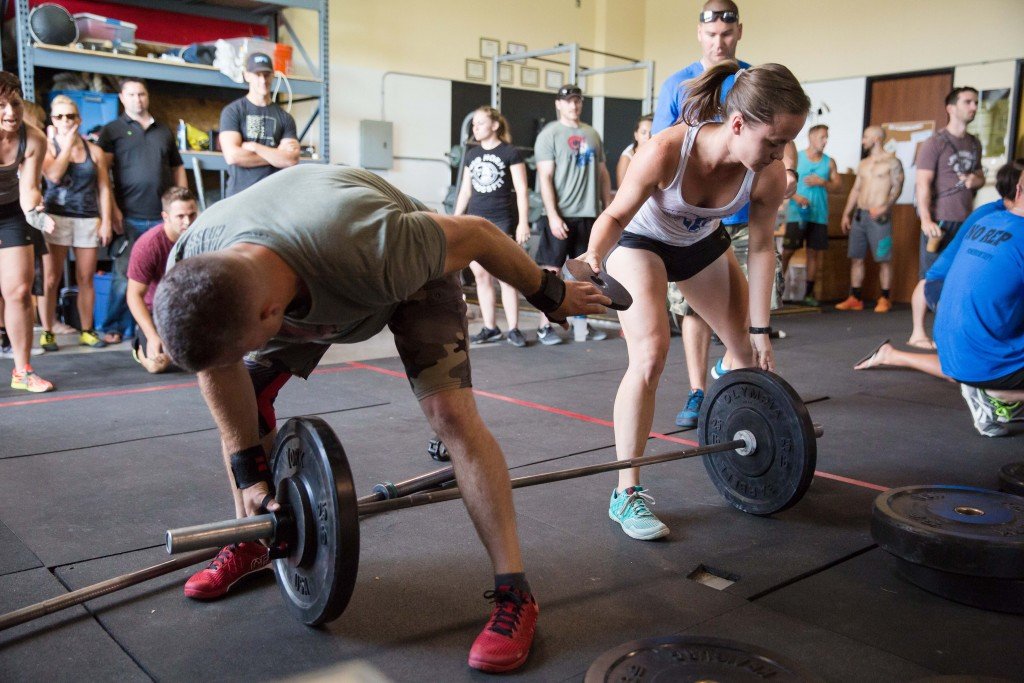 Alas, I couldn’t scale the workout so I set out to do the best that I could. Truthfully, I was psyched when I had three clean and jerks under my belt. At least I knew I could do the actual weight! 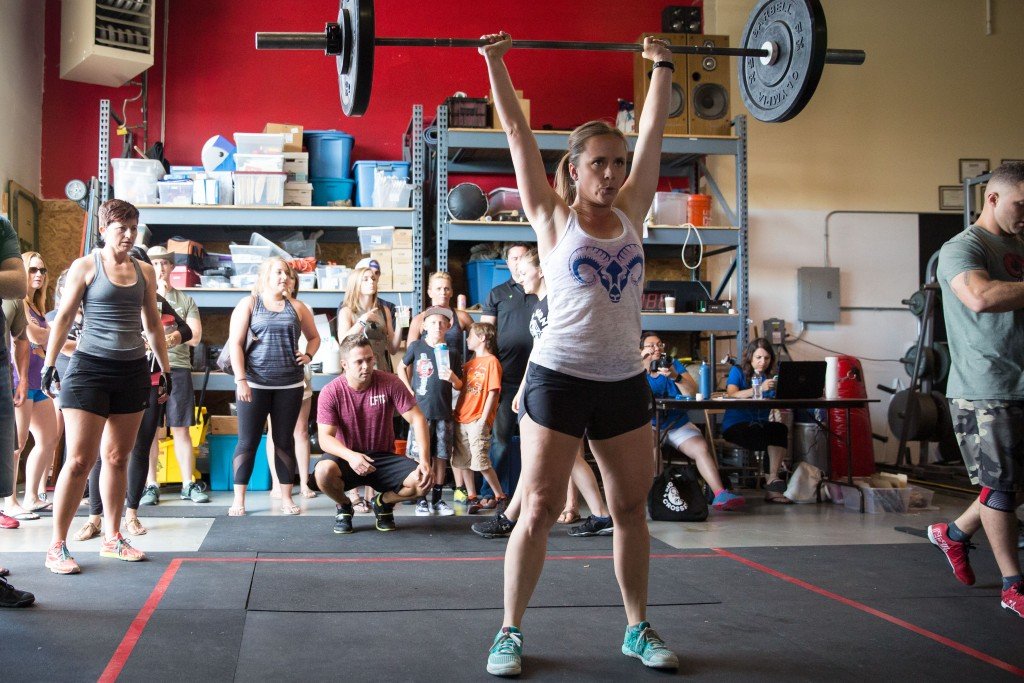 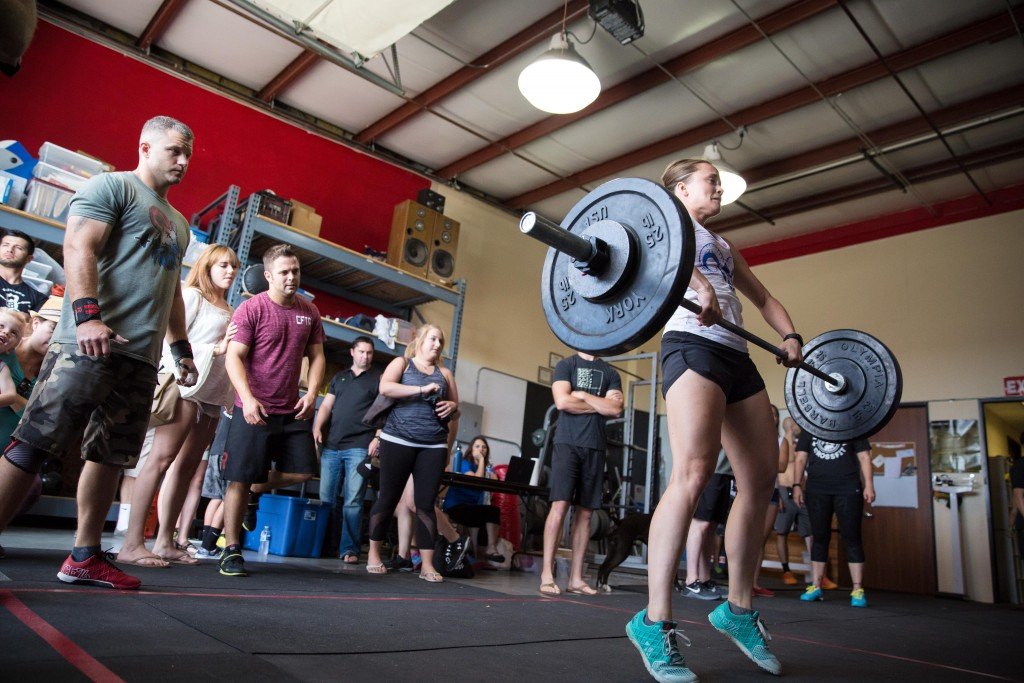 I came close to finishing but in the end, we hit our 18 minute time cap before I could finish {I was around 24-25 reps…so close!} Brian didn’t even get a chance to attempt Isabel, but I was still proud of myself. I finally did Grace!

This workout was straightforward: 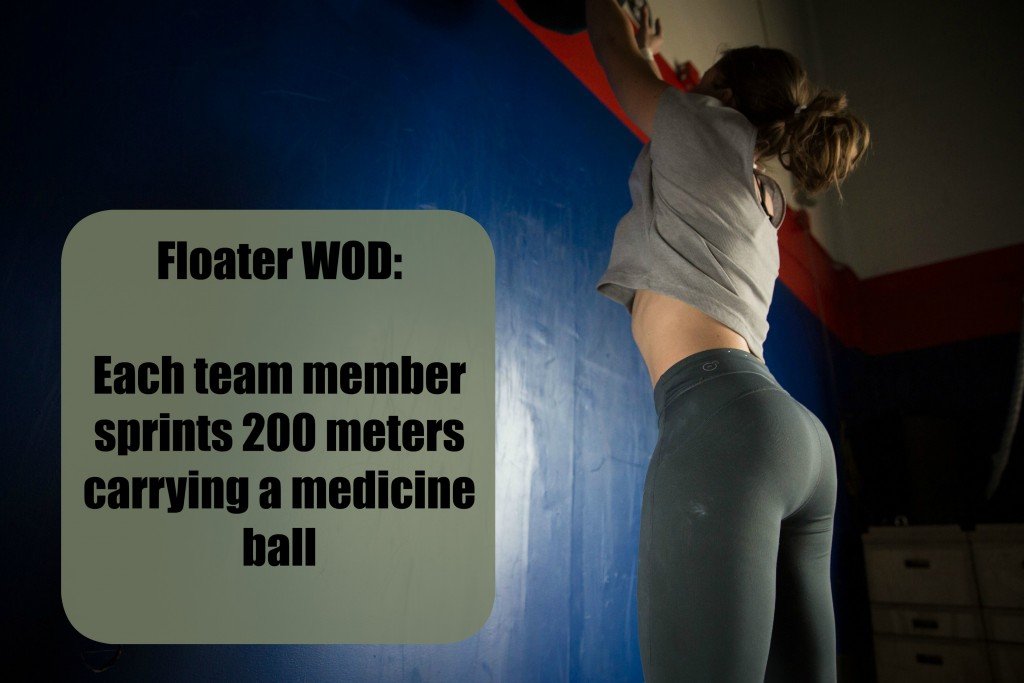 Pretty basic, right? The medicine ball weights were 20# for women and 30# for men. The only catch for me was carrying the thing. That was freaking awkward! 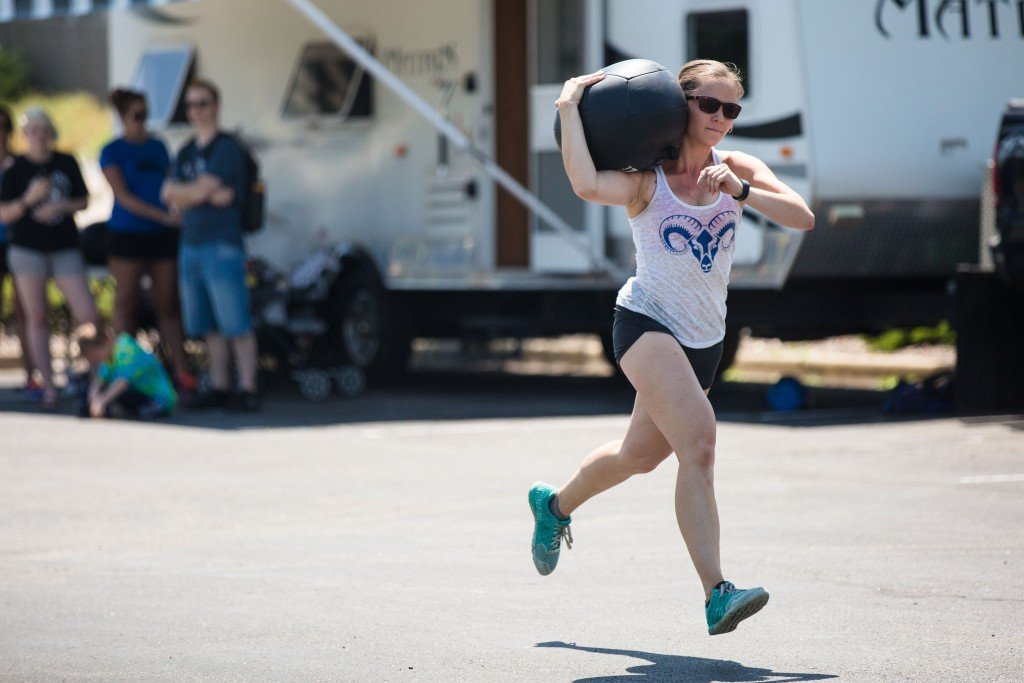 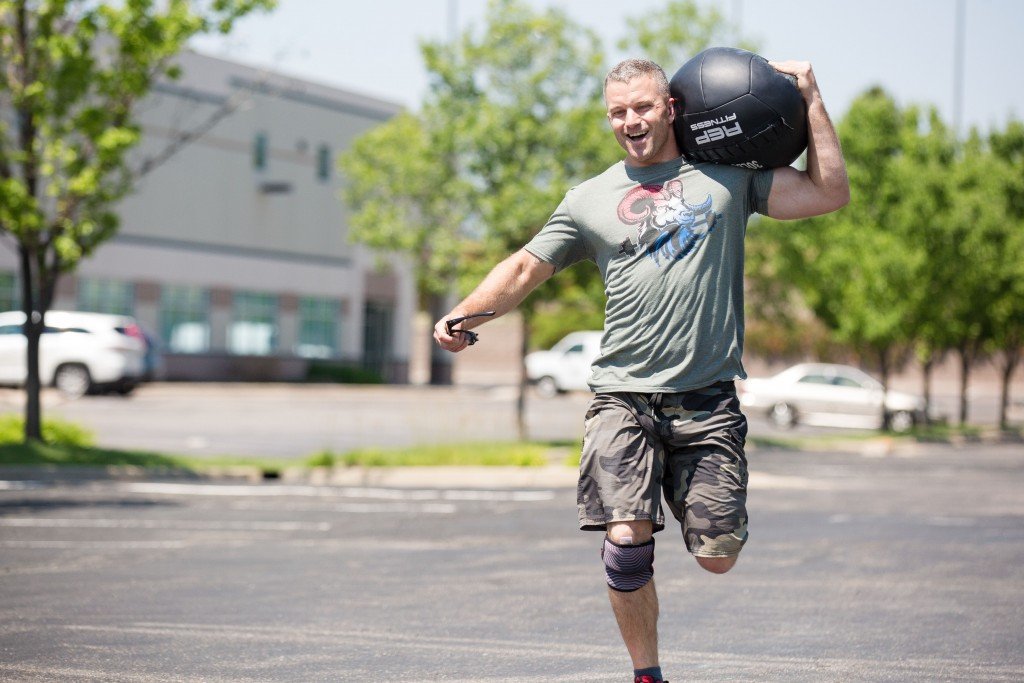 Brian did an amazing job and ran those 200 meters like a bat out of hell. His sunglasses even fell off while running, yet he managed to catch them while still sprinting!

Of the group, the third workout was my favorite! 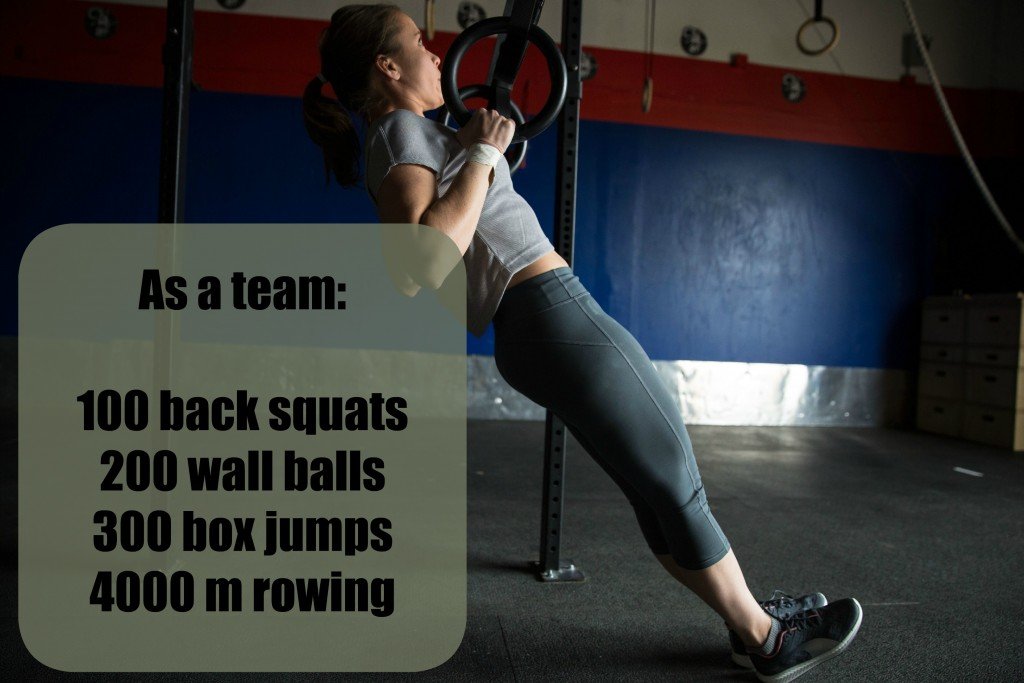 The time cap for this workout was 17 minutes and we were allowed to break it up in any way we saw possible. If you hit the time cap before finishing all of the movements, the judges added one second per movement/meter that you had left. 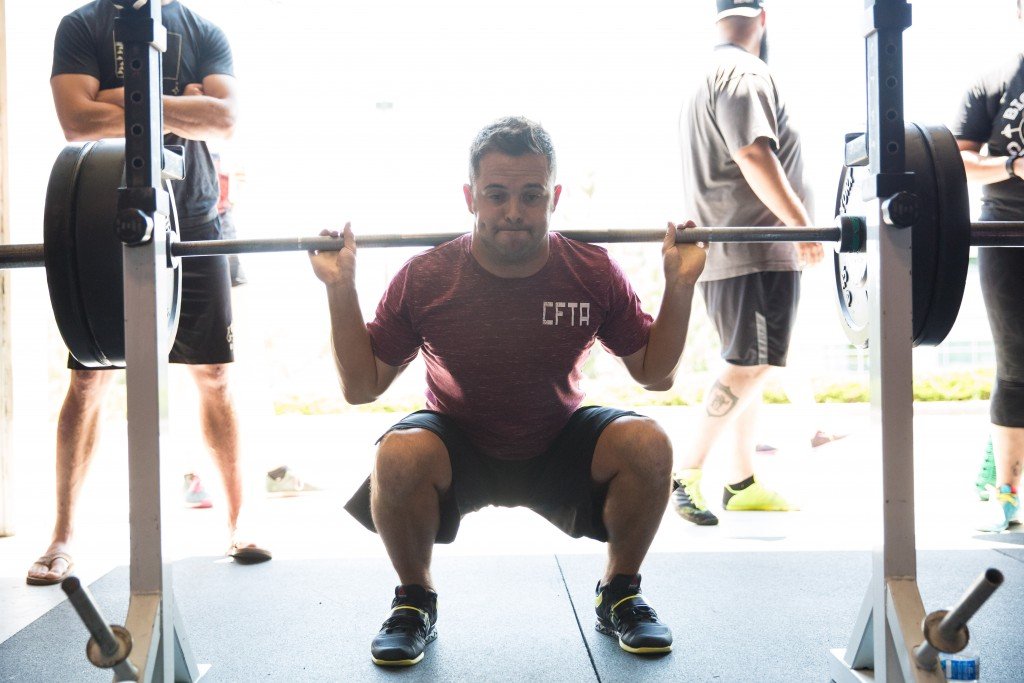 The back squat weight wasn’t super light: 125# for women and 185# for men. As such, Brian and Chris tackled all of the back squats and made them look easy!

Wall balls {14# for women and 20# for men} and box jumps are my jam! I love body weight movements and once I find a solid pace, I can settle in and do them forever. Because of this, I started out alternating between those two movements. Once Brian and Chris finished the squats, Brian came and helped me with the wall balls and Chris helped with the box jumps. 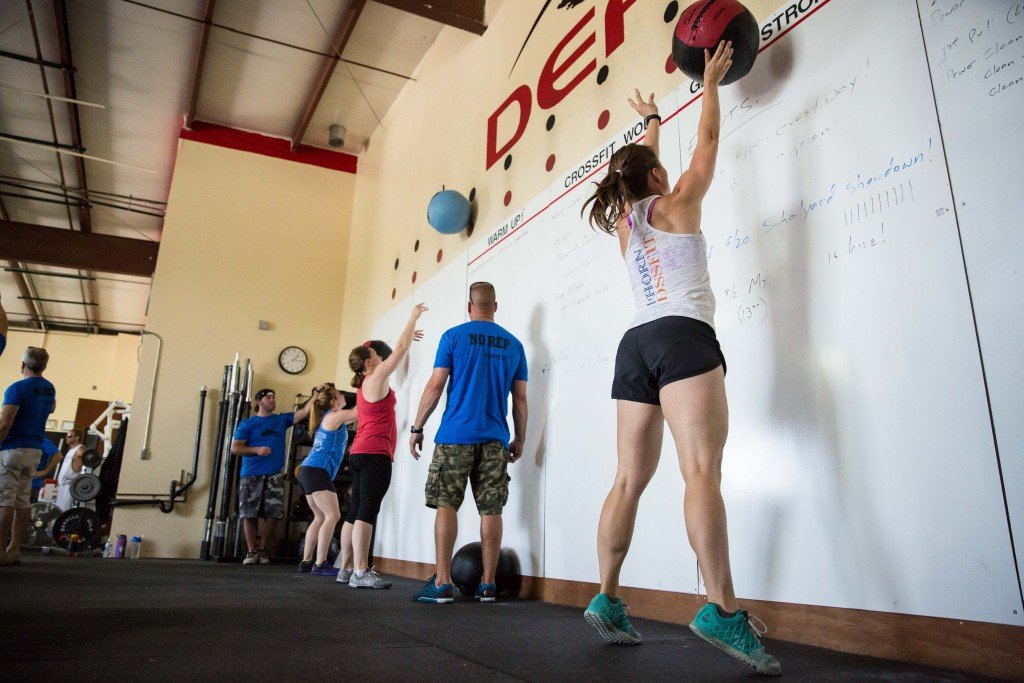 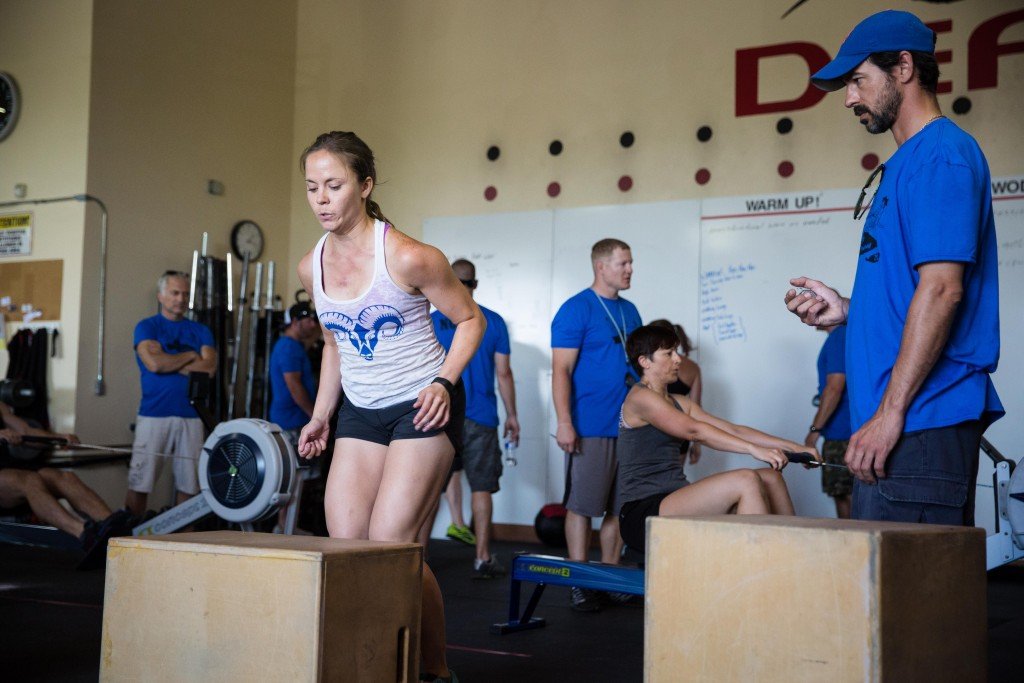 And Marilyn? That woman sat on the rower for practically the entire time! I hate rowing with a fiery passion so I was beyond happy when she opted to take it for everyone. 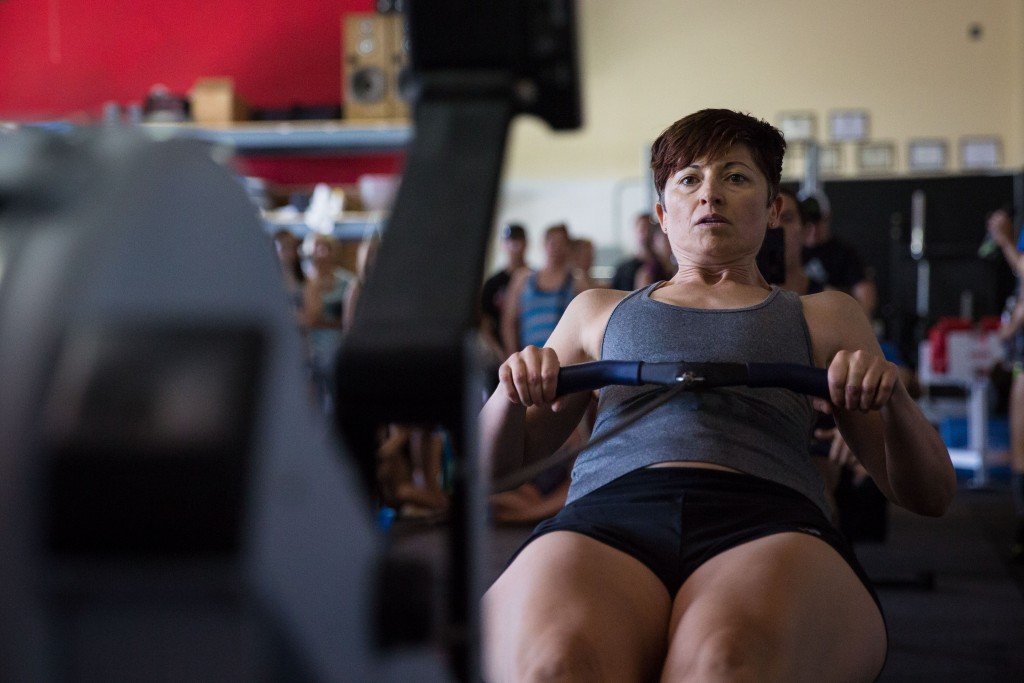 In the end, our team did a great job but we miscalculated the importance of the rowing. We finished all of the back squats, wall balls and box jumps….but hit the time cap with 240 meters of rowing left. Sure, that doesn’t sound like a lot but the judges added one second per meter, so 247 seconds. Hindsight is always 20/20 but we could’ve skipped ALL the back squats and a quarter of the wall balls and still scored the same! 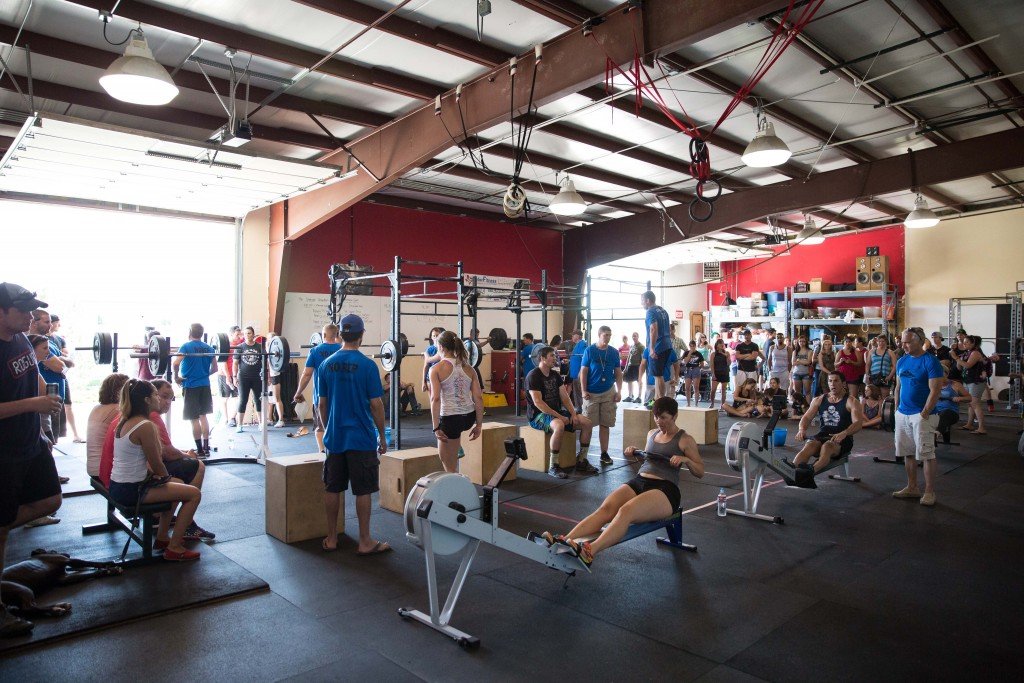 Even though are score didn’t reflect it, I think our team rocked on this last workout! Our teamwork was spot on and everyone was super encouraging. I worked as hard as I possibly could, knowing that my three teammates were counting on me. Their support made all the difference!

At this point, all of us were tired and in desperate need of a beer. Tug-of-war sounded childish and ridiculous; couldn’t we just end the comp and go get drinks?! 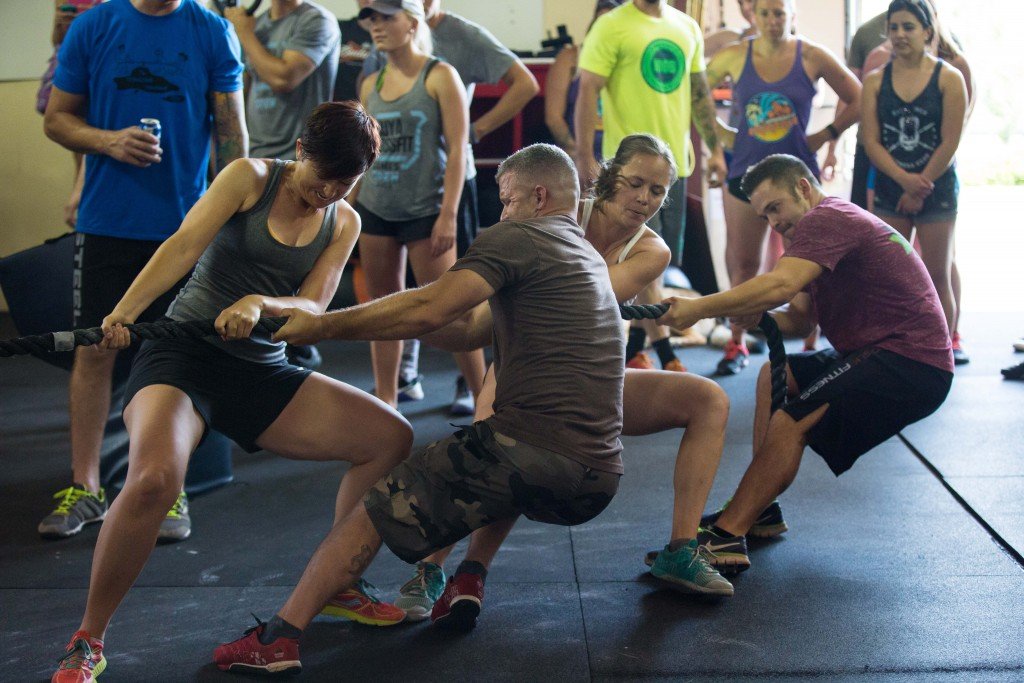 However, once the rope came out, this was fun! Sure, it was competitive but more than anything, it took me back to my childhood days on the playground. It didn’t matter whether it was friends or competitors on the other side of the rope– you just pulled as hard as you could!

We won a handful of battles before getting eliminated, and I had a freaking blast. Who knew tug-of-war could be so awesome?!

In the end, my team placed DFL: Dead Effing Last. And at first, that didn’t sit well with me! I’ve never finished last at anything in my life. How was it possible that we had finished at the bottom of the food chain?!

But then, I abruptly lost all concern about how we had placed. It was both Marilyn and my first comp and we had no idea what to expect. We’d survived! I was riding high on my personal glory from doing Grace Rx’d and Marilyn was singing over her 4,000 meter row. Brian and Chris had conquered personal battles of their own, and we’d all come out the other side, laughing and joking.

It was all about having fun. And you better believe I’ll be first in line to do it again!

Giveaway: One Month to CorePower Yoga

Backpacking to Willow Lake {AKA: When Wildlife Goes Crazy}